The first hours in Random didn't leave me lost, but excited!

Zoink! Games revealed Lost in Random last year during their EA Play showcase. The game immediately caught my attention with its gorgeous visual style, clearly inspired by gothic stop-motion films like Coraline and 9. It’s world and characters were clearly based on all sorts of board and card games, fitting of a place called Random. EA gave me the opportunity to go hands on with an early PC build of the game. While it’s still unclear to me how well this game will perform on the NIntendo Switch, it’s core gameplay and world shined in my first four hours with the game.

Lost in Random tells the story of Even, a little girl who gets separated from her older sister Odd when she rolls the Queen of Random’s magical dice on her 12th birthday. Odd rolls a six and is taken away to live with the Queen in her palace. Even, however, can’t sit by and decides to head out after Odd. Unfortunately for Even, she gets taken away to the lost battlefield of the dice. Here she finds Dicey, the only surviving dice from a long lasting war. It walks on two legs and talks in a mysterious language. Together the two must make their way through Random to reach the palace of the Queen and find a way to save Odd. Along the way they explore the six different worlds in Random and meet a cast of quirky characters. 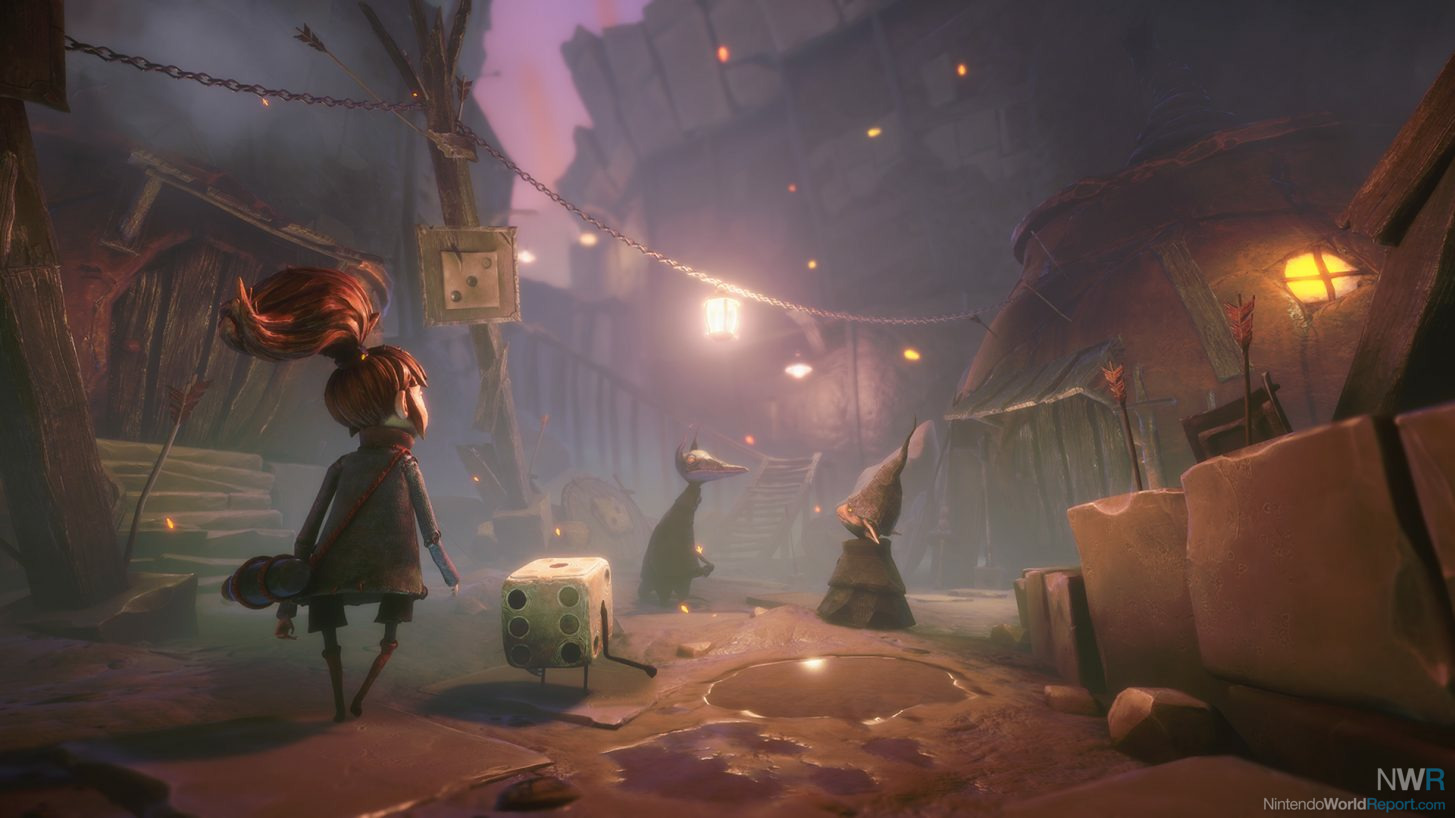 The most striking feature of Lost in Random is it’s gorgeous art design. The game looks like a stop-motion animation film come to life. Much akin to the work of film studio Laika and The Nightmare Before Christmas, it uses every opportunity of it’s artstyle to surprise and amaze. From the creative character designs of the townsfolk to it’s world in general. During my time with the demo I was able to visit two of the six major cities from the game and each one felt distinct and different. The starting town where Even and Odd live, Onecroft, is clearly designed as a shipping port with all the buildings being based on kettles and pots. But my time with the game started to get even more impressive when exploring Two-Town, a place where every character has a split personality of some kind. Some of them have actual twins, while others swap personalities from time to time. Even the town itself has two majors that have divided up parts of the town itself. While I wasn’t able to visit the next city Threedom, there were already hints about the place in Two-Town, suggesting it was ruled by three rivaling siblings claiming ownership of the city. It’s these touches that makes Random truly a joy to explore because of its fleshed out worldbuilding. That’s before you get to the decorations, which are each clearly inspired by board games. Domino pieces line the streets, cards function as spawn points for enemies and even during combat you will be moving around gigantic pawns and game pieces to advance. 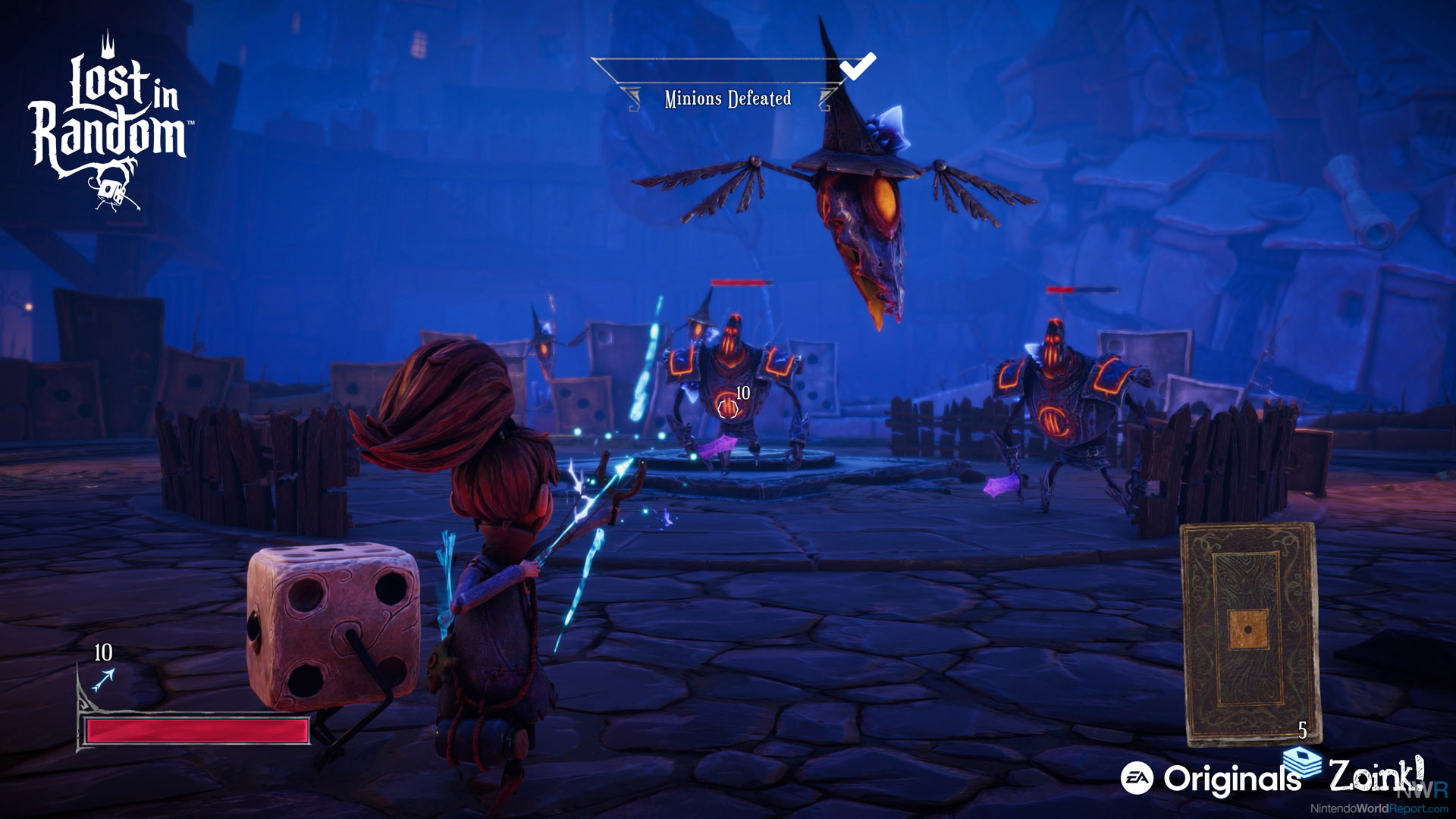 So let’s dive into combat. Lost in Random is a mixup of a card-based battle game and a third person RPG. You see, as Even herself you can’t really deal damage to opponents once you get drawn into a battle encounter. Even is only armed with a slingshot that can hit enemies from afar. The catch is that none of these do actual damage to the enemies themselves, but you can use it to knock off energy crystals. Once enough crystals have been collected by Even you are able to throw Dicey as a roll. Now this is where combat really finds its edge. When you roll Dicey, time stops and you gain energy, based on the number you’ve rolled with Dicey. You can spend this energy on the cards that are part of your deck and drawn at random. Each card has its own unique effect that needs to be used in a specific way. There’s damage cards that give Even weaponry like a Sword or a bow that can hit enemies up to a certain number of times. There’s also support cards like additional energy, drawing additional cards and healing HP. And finally there’s hazardous cards that you can place while time is standing still to surprise enemies once you exit the time stop. Once you’ve hit an enemy, time resumes and effects go off. This gives combat a very strategic feel that allows you to truly mix and match cards you’ve found along the way. For example, when fighting a large group of enemies, I liked to use some energy to decrease the energy costs of other cards, place another Time Bubble that slows down enemies that are caught in it and also turn Dicey into a large explosion that I would then put within the Time Bubble. Before the normal flow of time would resume I’d hit an enemy for additional energy and then watch the chaos unfold. Honestly, the best comparison I found myself making was the combat system of Final Fantasy 7 Remake. The battle system feels satisfying, especially after you collect pins, that allow you to save cards for later usage. 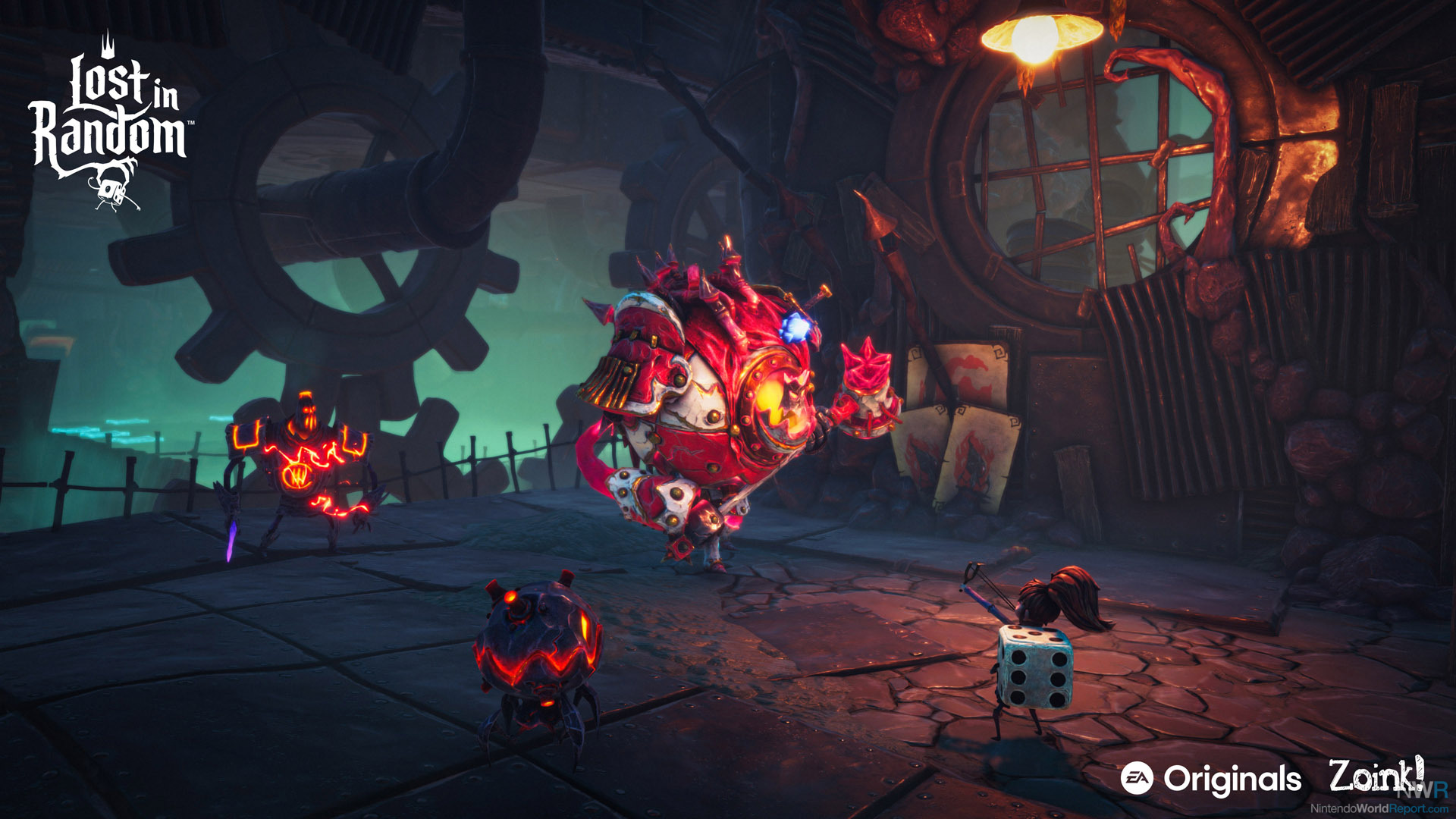 My one gripe with combat encounters in general is that they could start to feel a bit tedious because of their length and lack of enemy variety. During my time with the game I encountered two specific types of opponents. Melee and ranged attacks are basically the bread and butter of the combat system and sometimes I found myself waiting for the bow card to appear to kill certain types of enemies. While combat itself didn’t get stale, the length of the encounters and the respawn rate of enemies could get tedious at times, because at all times there is a factor of randomness involved. At the beginning Dicey can only roll a 1 or a 2, so I can imagine that once Dicey is able to roll higher numbers for larger values of energy, the combat might become too random to enjoy.

There are also a few alternate combat scenarios, one of which sees you moving a giant pawn piece across the combat encounter. The goal isn’t necessarily to defeat all enemies, but rather to get it to the goal by throwing Dicey and having the piece reach the end. While it doesn’t necessarily fix the problem of the length of combat encounters I’ve mentioned earlier, it’s a good sign that the developers looked for other ways to spice up the game. I do hope that the final version will contain more variations on combat like these. 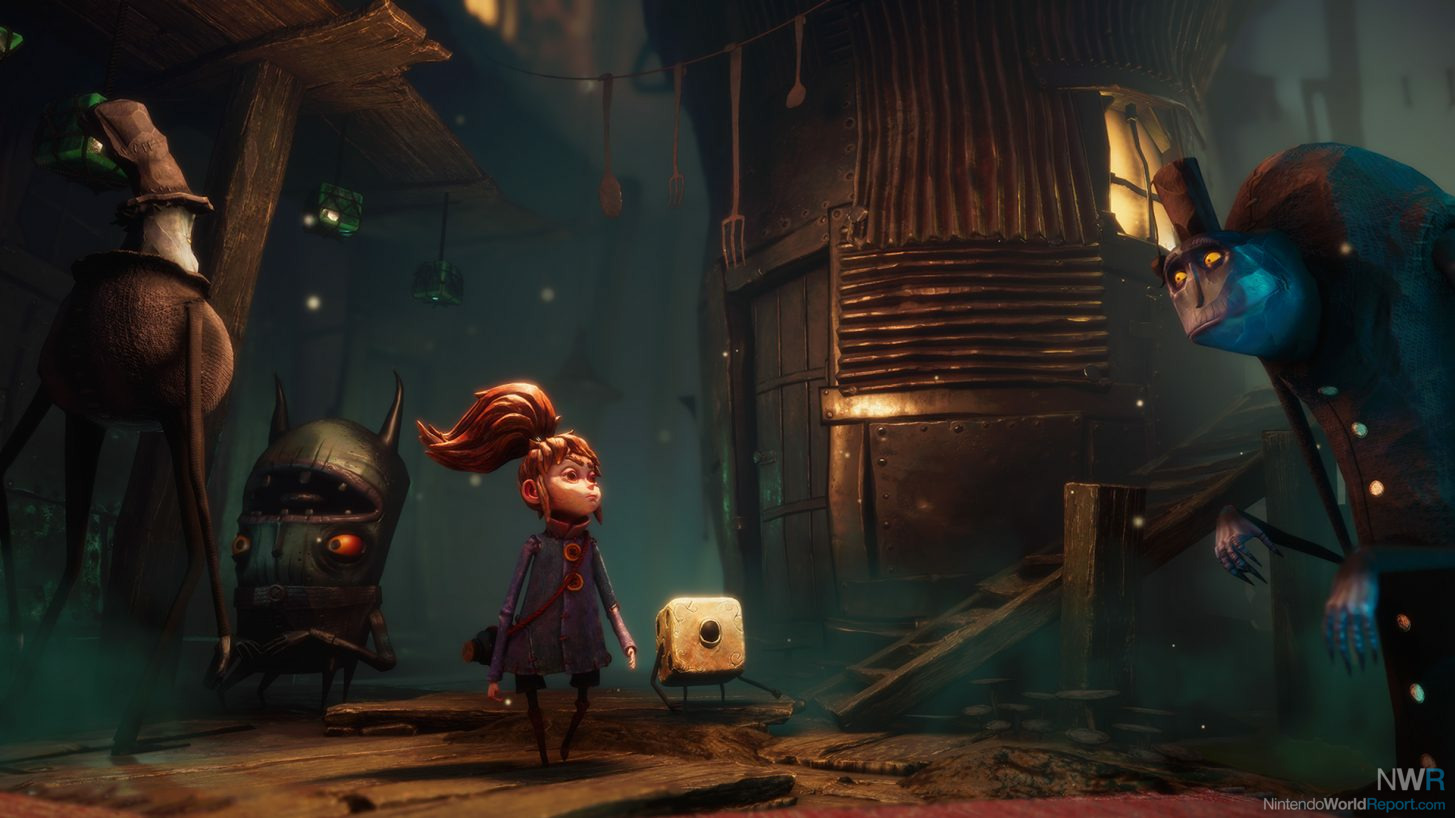 My main reservation with the game is the precaution for the Switch version. I played the game on my gaming PC and while I did encounter quite a few bugs I am holding my breath to see if the smoothness of combat and visual fidelity will transfer to the portable version of the Nintendo Switch. I double checked with the developers and according to them the Nintendo Switch version will target a 30fps framerate with a resolution of 800x450 on handheld mode and a docked resolution of 1600x900. I think the fact the game doesn’t feature an open-world, but is more focused on lineair exploration based level design will help the Switch version. We will have to wait and see how it turns out once Lost in Random releases on September 10th 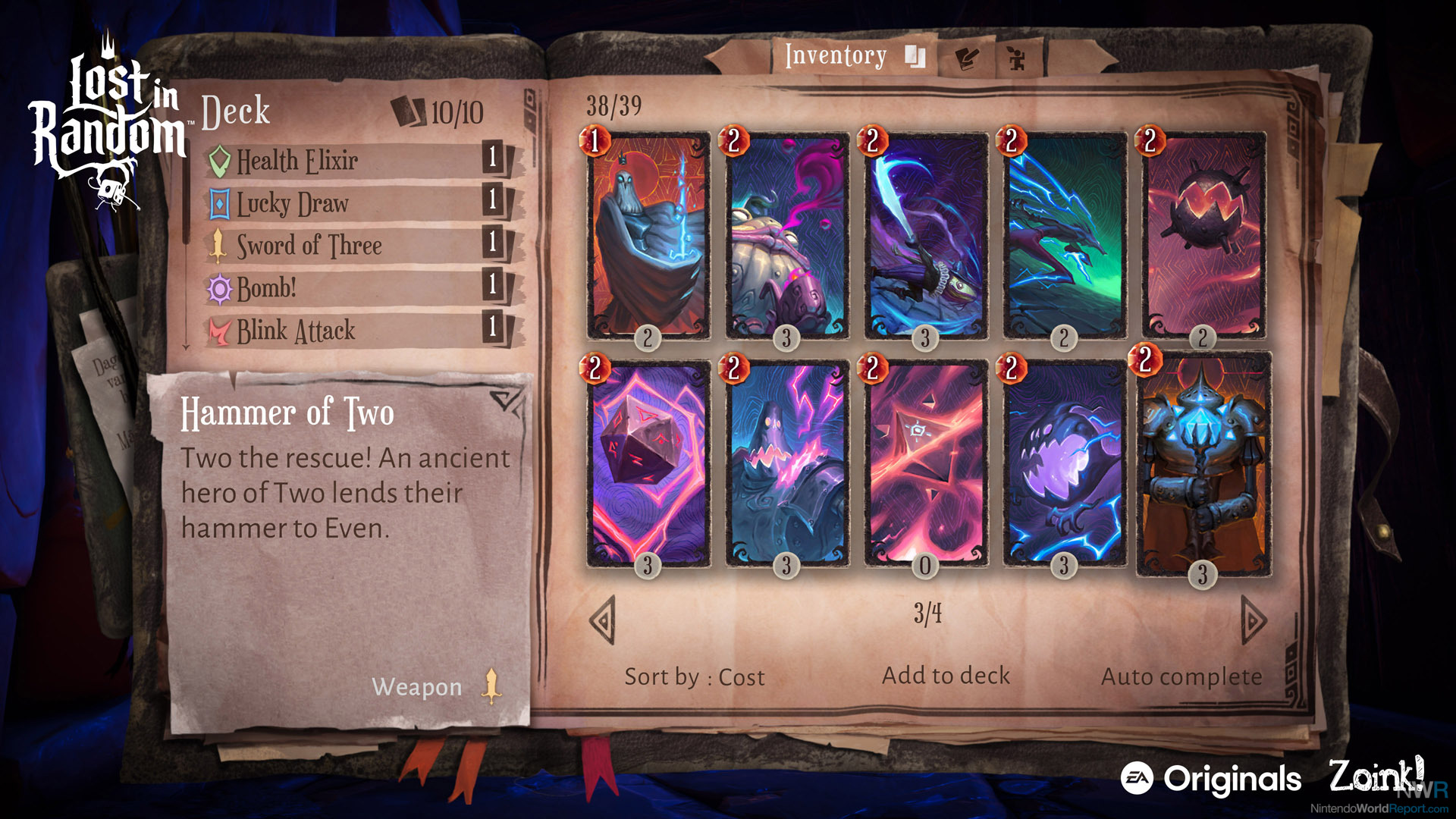 Thankfully there’s also a lot to praise here aside from the aesthetics. The soundtrack is absolutely magnificent so far. It perfectly complements the style and tone of the game, like a twisted and dark Alice in Wonderland. The voice performances are stellar too, though I found it odd that Even does not talk during dialogue scenes in-game, but is fully voiced in the cutscenes and dialogue, while the other NPC’s are also fully voiced. My hope is that it’s part of the preview build I’ve played, of which the developers have said that changes are still being made. The deckbuilding also feels solid, you can trade in collected coins for new cards that help you build up your arsenal of attacks during combat. While it definitely isn’t meant to be a deck-building game like Hearthstone, the variety and strength of unlockable cards is great. I’m pretty sure that every player will find their own preferred techniques and fighting styles. The pacing outside of combat can be a bit slow and consists mostly of (fetch)quests for the citizens of Random, but it always remains a joy to find new secrets hidden all over the place in Random. 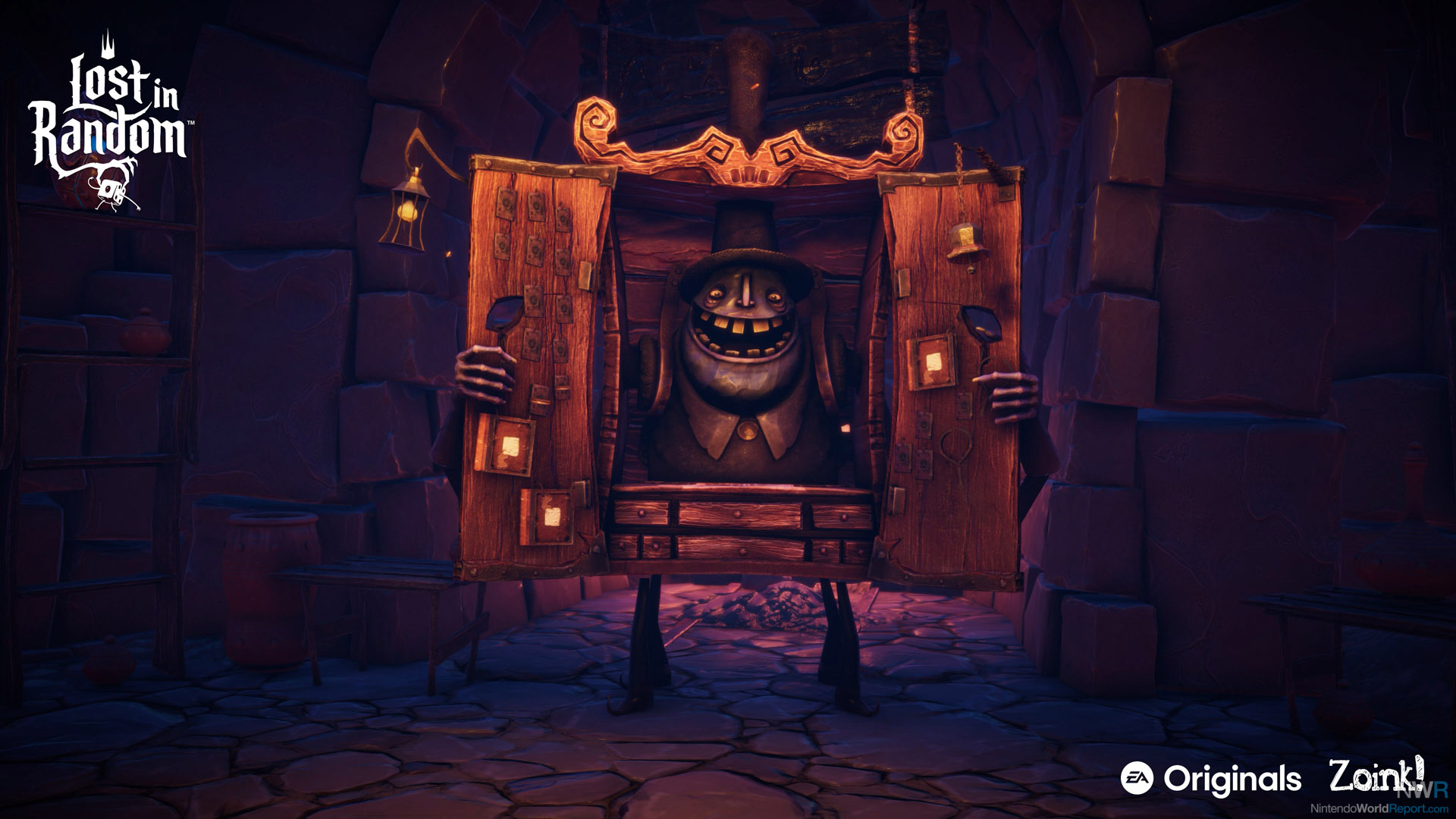 While Lost in Random feels like a truly ambitious adventure to embark on, I’m still remaining cautious as to how well it performs on Nintendo’s home console. The combat feels genuinely great, but the experience so far was tied down by its slow pace and padding in both the length of combat encounters and the quests in the overworld. On Switch, however, I think I wouldn’t mind this as much, since I love to do these activities in short pick up and play sessions. If you are into creative worldbuilding and dark adventures then Lost in Random should definitely be on your radar. It’s atmosphere and style is unmatched at this point and feels like a gothic fairytale come to life. Now it’s a matter of time to see how much life there truly is to this tale.