Another member joins the family and... OH MY LORD WHY IS THIS SO LIGHT?

Most people will know that I'm a Nintendo 3DS nut. I have almost every iteration of the system, and even in a post-Switch world I still play my 3DSs regularly. That is because the library of both Nintendo DS and 3DS software is absolutely staggering, and I still want to play on a smaller handheld. The foldable design makes it easier to carry around in a pocket or bag. That brings us to the 2DS, which is likely my least favorite 3DS-compatible system. The design quirks are one thing, but it is simply less fun to carry around. The company is now mixing the foldable design, the singular LCD screens and the power of a New Nintendo 3DS XL in one package. The result is New Nintendo 2DS XL. Wow, what a name. While I could rag on simple things like that, a handheld is defined by its functionality. Nintendo allowed me to test that at their offices, where I got several hours of playtime.

The very first thing I felt when picking up the New Nintendo 2DS XL was: ''Am I holding this correctly?'' You see, the system is extremely lightweight at only 260g (9 oz). Even at that, it felt lighter than what Nintendo is actually claiming. The lightest one currently available is the New Nintendo 3DS, which sits at about 253g. If I had to go by feel, the new handheld felt a bit closer to 200, which is quite impressive. If you then take into account that the New Nintendo 3DS XL weighs about 25% more than that, the New Nintendo 2DS XL feels like barely anything at all. Naturally, this is a lot of technical speak to say that you can easily play long sessions without feeling a strain in your hands. I felt this in particular with a game like Hey! Pikmin, which requires you to keep a hand free for the stylus.

Another thing that you will immediately notice is that the bulk of the system is in the bottom. The upper half is only the screen, which leaves an incredibly very thin top. Once you open it up, you will have to get to used to the look. It feels that you're slightly farther away from the top screen. I can't really explain this any better, but after a while, I got used to the look of it. The bulkier bottom is also less noticeable when you start playing with the system. It is only in comparison that you will start to see a difference. The most important question is if it does everything a 3DS can do barring the 3D, and for the most part it can – but there are a few small caveats.

Naturally, the buttons are the same as a New Nintendo 3DS XL. You have the same screen size, upgraded power and the NFC-Reader/Writer chip in the touchscreen for Amiibo. The differences, however aren't hard to see. The HOME-button, which has always been in the middle of a system, has been moved to the left side. It has a soft push that I really like and is far easier to reach during gameplay. The touchscreen no longer has raised edges, which is something I won't weep for either. In the middle, you will find the microphone, camera and notification LED that lights up whenever Nintendo sends a message. Seeing the camera in the middle reminds me of the Nintendo DSi, but unlike that system, you will still see the camera when you fold it. I don't mind that aspect per se, but it is something to keep in mind. 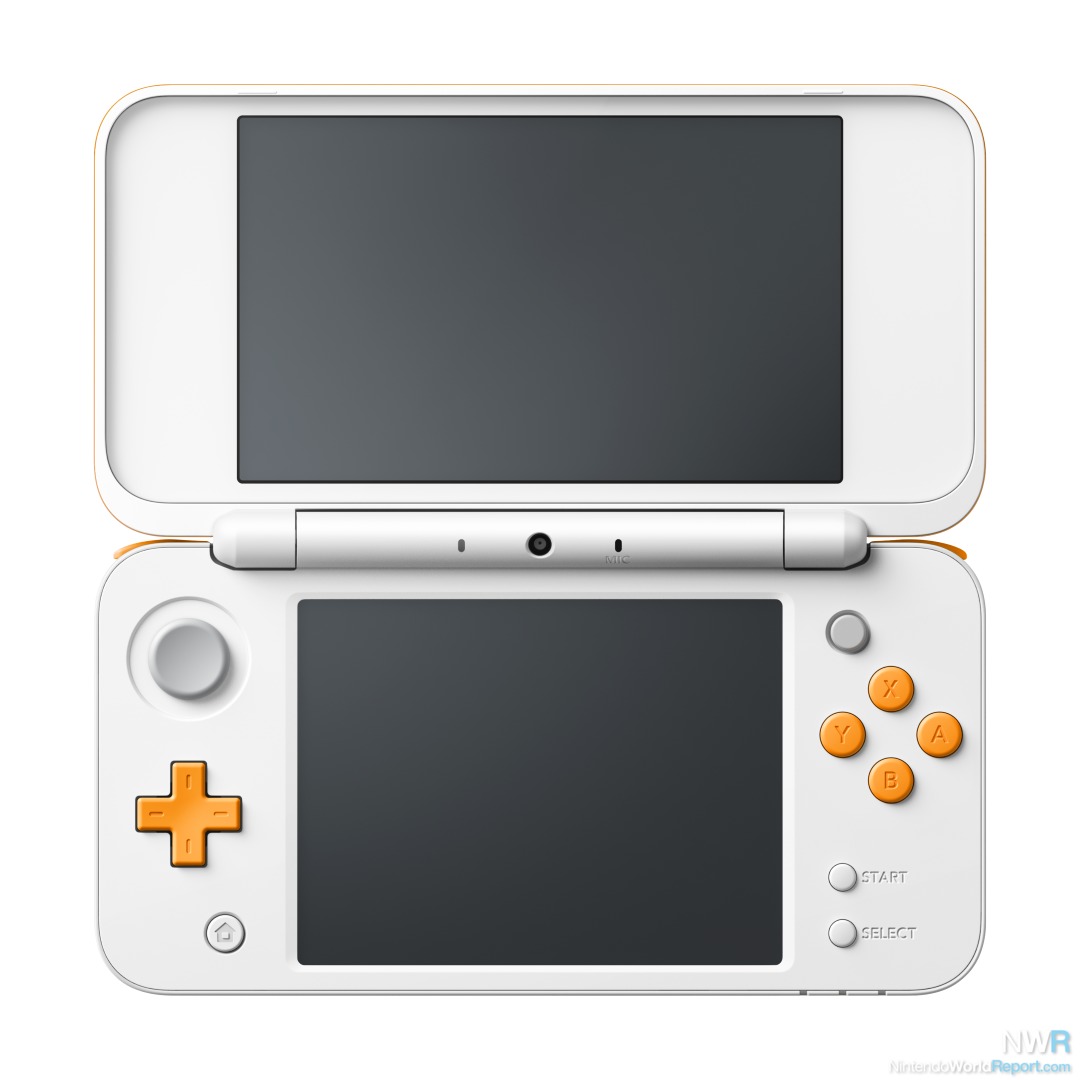 When you start to look around the system, it is then that you see the true changes made to the handheld. At the left side of the New Nintendo 2DS XL is a flap. Once opened up, it is here you can insert games and the microSD card. This is personally something I'm thrilled about as the New 3DS never handled this well. You could feel the gap of the Game Card slot, and changing the microSD card required you to remove the back. Another big change is that the speakers are on either end of the system, which marks the first time that they aren't in the top screen. I thought that I would be bothered by this, but I'm surprisingly not. They are loud enough and it isn't mono like on the original Nintendo 2DS. What helps is that the headphone jack is still nicely in the middle. The thing I am bothered by is the stylus. The thing is tiny and it continues the downward trend of the New Nintendo 3DS systems. It sort of requires me to rely on a third party one, which I'm not so keen on.

The last big change can be found with the AR Cameras. Due to the changed internals, the cameras are moved to the middle of the system. I had to test these out for my time with the English version of Miitopia, which Neal will have impressions for. I found it harder to point and shoot with these cameras as I still thought that they were in the top screen. Naturally, I adjusted my position every time I realized this and did what I was supposed to do, but it was an annoyance. I don't like the position of these in the slightest, but I do realize how little I will use them in the grand scheme of things. Personally, I moved on from the AR Games and Face Raiders minigame and solely use it to scan in Miis every now and then. 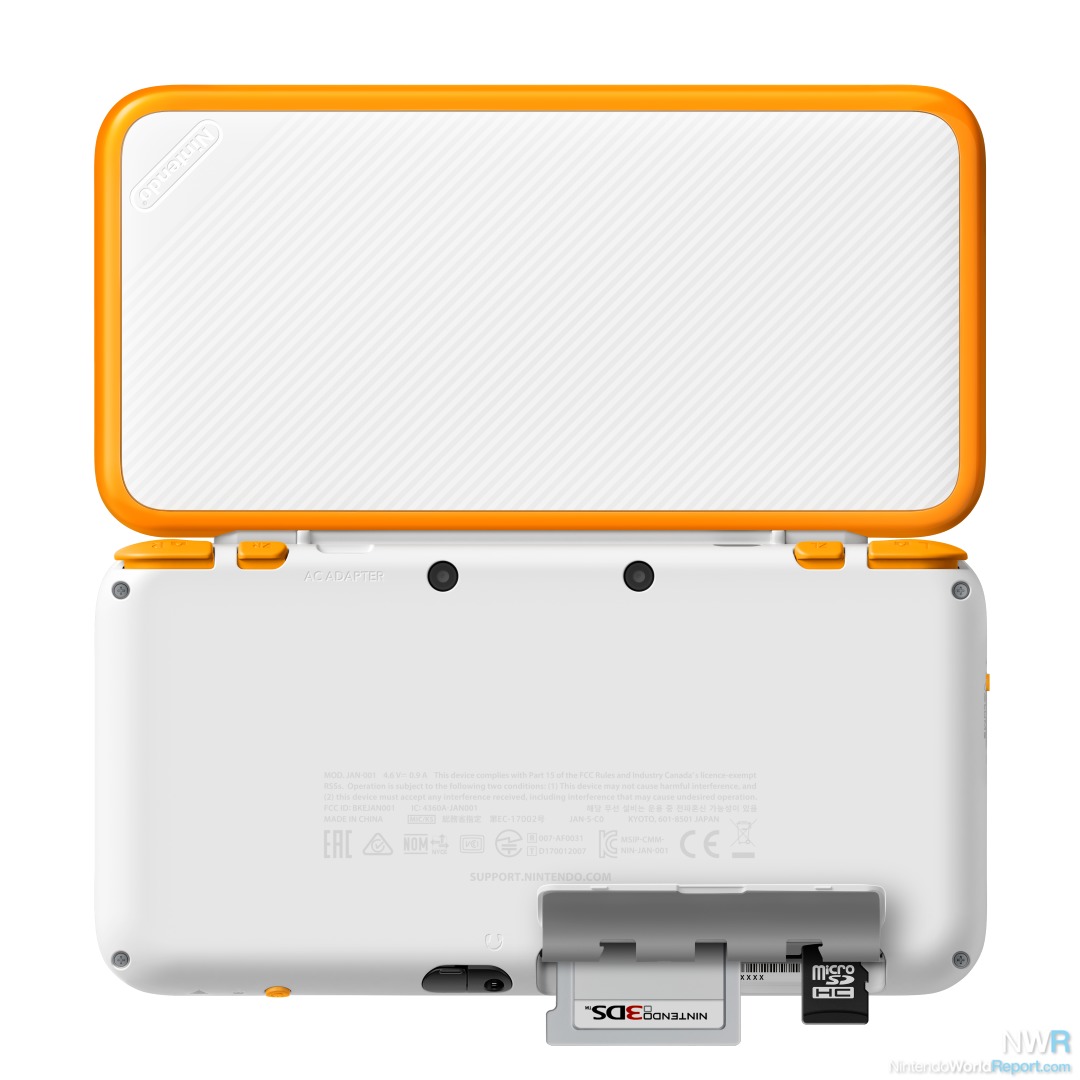 As it comes to actually holding the New Nintendo 2DS XL, the size is just about right. It is slightly less wider than a New 3DS XL, but it can be easily enjoyed with any size of hand. Even with my huge hands, they would rest pretty nicely in there. That comes down to the ergonomics, which I feel that Nintendo really thought through in this design to create a one-size-fits-all solution. For the act of playing games, this machine will fit perfectly. It is easy to throw it into a bag, and the rugged top ensures that it can take a beating before being taken out. There are less flimsy bits about it as well, which ensures that it can easily stay together in a single piece.

The New Nintendo 2DS XL left me impressed. There are elements that I personally would've liked differently, but this is something that can be easily recommended to anybody. As long as you don't care about the 3D effects, you are pretty golden with this handheld. With over 1000 games on the counter, a kid or adult can easily will throw it in a bag and distract themselves when needed. In most of the world, it is also comes in two fancy color variations that are nice to look at. Personally I'm totally on board for the white and orange one, which has accents I really dig. Together with a slew of new games, the New Nintendo 2DS XL is ready for a storm on July 28 in both Europe and North America. Australia can already toy around with it on June 15.

After the announcement video last week I thought the 3D cameras ust have been removed. But they are on the bottom section now? Thats weird

The location of the game card and SD card are great. I had a hard time getting the back of my N3ds XL off to the point I had to push a lot harder then I was comfortable with to get it off. Hope their future handhelds handle it like this

If they made a 3D version I would buy one at launch. It's disappointing to see 3D left behind. Glasses free 3D with eye tracking is groundbreaking technology and now we can only dream of what HD Nintendo games might have looked like on a "3DS HD". And while I'm lamenting... why are there not more New 3DS models??? The thing sold out so fast in North America and the resale price is over $200 for a used one. Still, it's nice to see the 3DS still alive and kicking in some form. Thanks for the in depth review. If anything, it will be a nice system for VC and DS games.

If they made a 3D version I would buy one at launch. It's disappointing to see 3D left behind. Glasses free 3D with eye tracking is groundbreaking technology and now we can only dream of what HD Nintendo games might have looked like on a "3DS HD". And while I'm lamenting... why are there not more New 3DS models??? The thing sold out so fast in North America and the resale price is over $200 for a used one. Still, it's nice to see the 3DS still alive and kicking in some form. Thanks for the in depth review. If anything, it will be a nice system for VC and DS games.

3D is great for gaming and it breaks my heart to know so many people dismiss it or play their 3DS systems with the 3D effect off. I'd be really tempted to pick up that Wii U color scheme model (black and blue) if it were a 3DS model. I'm glad that Nintendo is still supporting the 3DS despite the Switch launch and it's portable nature but I do fear the 3DS line coming to an end. If it does goes extinct by the Switch than I hope Nintendo finds a way to continue on 3D gaming in some may. Maybe the technology will exist that a 3D eye tracker can be used on one's TV to allow 3D gaming with a sensor bar like the Wii / Wii U systems and the sensor bar that tracked the Wiimotes. I've been replaying Mario Kart 7 again and that extra depth when racing is great. I've got 2 3DS systems, an original aqua launch system and a black NEW 3DS XL from when that system launched. Lately, I've been thinking that I'd be willing to buy another 3DS. Probably a regular NEW 3DS to replace my original. The shoulder buttons don't work on the original and the top screen has a dead pixel. It could use some repair yet it might be better to just upgrade than repair it. Yet, store are sold out of 3DS consoles and the only thing they seem to have are the lame 2DS consoles. Rather than restock with 3DS, Nintendo is pushing ahead with more 2DS lameness. Sad.

As someone who can't see the 3D effect, I think this looks awesome. If I ever have the extra cash and time to make the system transfer, I'd love to have this as my "definitive" 3DS.


Then again, I haven't touched my 3DS since Switch came out.