The Zelda spin off sees new life on the 3DS and it’s better than you might expect.

Having played my fair share of Musō (aka Warriors) titles on the Nintendo 3DS at previous Tokyo Game Shows, I can honestly admit that as soon as I heard that Zelda Musō Hyrule All-Stars (known as Hyrule Warriors Legends in the West) was heading to the dual screen handheld I was a bit doubtful. Okay, so maybe I’ve only played one or two titles in the series on the platform. Even though the gameplay was usually just fine, various technical aspects of the games such as the frame rate or graphics were deterrents from making the games something special. After getting my grubby mitts on Hyrule Warriors Legends at Tokyo Game Show, I walked away impressed and can easily say that the console experience translates well to the 3DS.

The demo allows players to choose between Hyrule Warriors Link, Toon Link and Tetra before they go into the field of play. Unlike the Wii U version, the 3DS version lets players cycle between two characters to control throughout the level. This is done by tapping an icon of the character on the touch screen. This mechanic has been put to use in Warriors games in the past (such as the Warriors game I played at TGS last year) so it’s really nothing new to the series. Still, being able to change characters on the fly typically can be very beneficial. For example, there are times when you need to get to an area that is about to be taken over by an oncoming wave of enemies. As opposed to hoofing it across the stage, if your other character is closer, you can simply choose them and proceed with the mission in a more efficient manner. It’s a nice touch. Other than that, the gameplay translates pretty well to the 3DS. You’ll find yourself easily cutting through hundreds of enemies just as easily as you would in the Wii U version.

In my time with the game, I played through the demo using Tetra and Toon Link, two of the new additions to the game. Tetra came equipped with a sword and a pistol that she used in combination against the enemies. Toon Link seemed like somewhat of a quicker version of Hyrule Link but seemed a bit weaker. My limited time with the demo didn’t allow me to try out the stage with normal Link. While not all of the new content for the game was shown off at TGS, we did get a peek at a new item the game offers. The hammer was added to the repertoire of items and can be used to attack and to help with solving puzzles. There is nothing nearly as complicated that you would find in a mainline Zelda game, but it’s a fun addition nonetheless.

Legends is no visual slouch. The game has an extremely smooth frame rate and looks great on the hardware. Even with the multitudes of enemies coming in from all sides the game never took a hit on performance. Obviously the game doesn’t look quite as nice as its HD counterpart on Wii U, but it is still an impressive looking game.

Hyrule Warriors Legends plays well and looks excellent on the 3DS. While the final game is by and large the same game that you played on the Wii U last year, there are a few enhancements and additions that might make it worth your while. It launches in Japan on January 21, 2016 and is hitting western markets early next year. Be sure to check out the latest trailer from TGS below!

Great info, as always! I think the deal-breaker question everyone is wondering about this game right now, though, is "Does it come bundled with a scarf?"

Unfortunately, it doesn't look like the scarf is going to be included in any of the SKUs that they're releasing. Oddly enough, all of the staff around the demo unit were wearing them and attendees could even try one on and get their pictures taken with it (along with the Master Sword and Hylian Shield). They're just teasing us now! 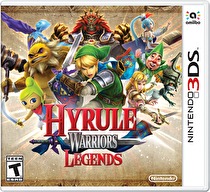