Nintendo was kind enough to give us some hands on time with their upcoming April eShop title, NES Remix 2. Now, if you know me, then you will know that the NES was the first home console I ever owned. The NES fills me with nostalgic joy, and as a result, I loved the original NES Remix. Yeah, not all the games remixed in the first entry of the series have the best graphics or controls, but NES Remix attempted to teach players how to play them at a beginners level before gradually challenging them with stages requiring more advanced techniques. All of this, of course, occurs through the form of WarioWare like graded challenges. 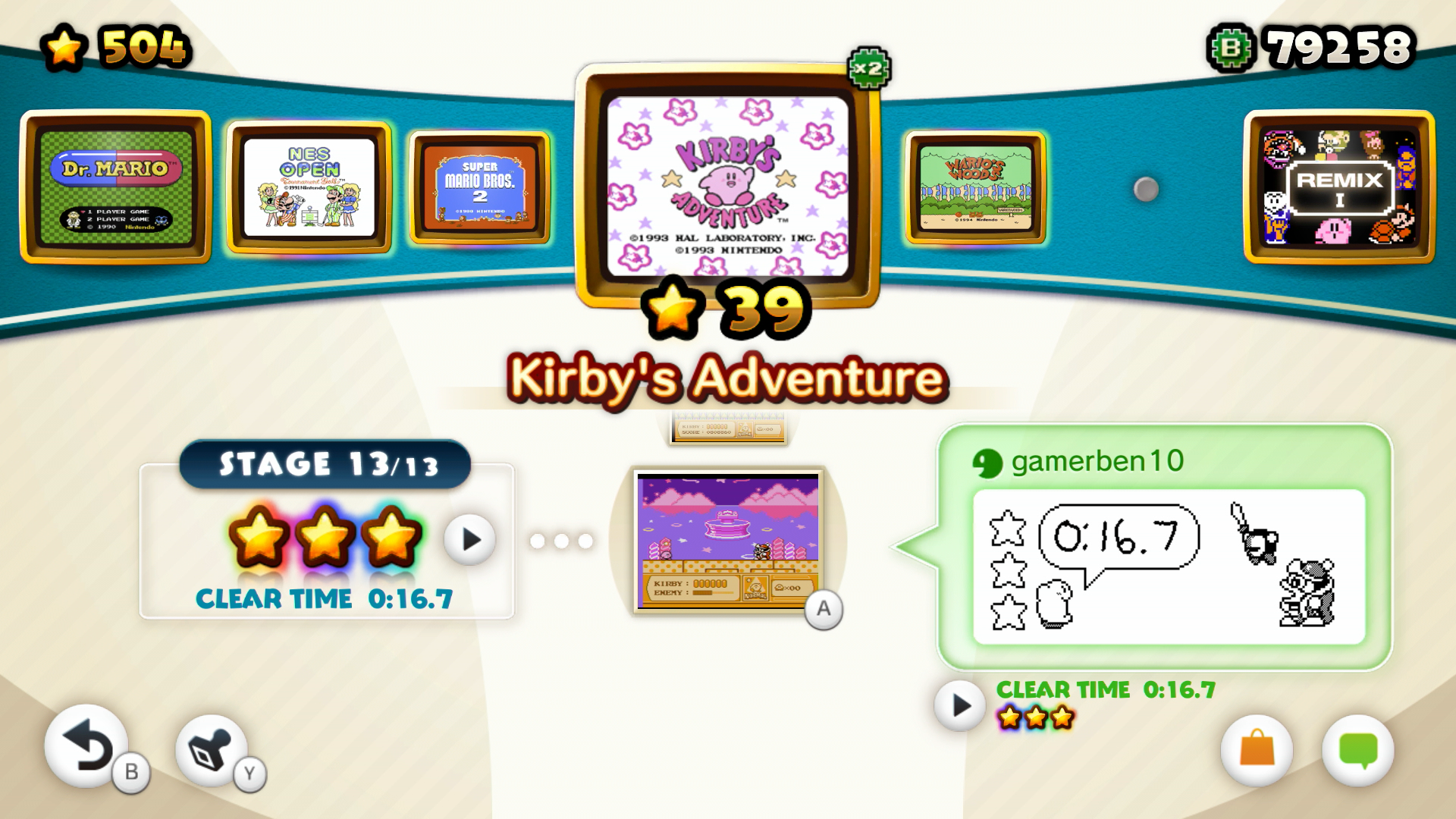 Those looking for something completely different in NES Remix 2 will be disappointed. The title screen for NES Remix 2 had exactly the same music as the original, with the new “2” logo, an option for Super Luigi Bros. (more on that later), and new sprites for the set of games remixed in the sequel. From there, the inner menus and layout look exactly the same as the first game as well, making this feel like more of an expansion pack than a true sequel, but that isn’t necessarily a bad thing.

The reason the amount of “sameness” in the game’s general layout isn’t bad is because the format of the game itself isn’t the showcase. What it comes down to is the set of games that are being remixed. The good news for most people, who sadly weren’t too fond of the games present in the first NES Remix, is that the new set of games are “generally” regarded as better titles. This time around fans can expect to see remixes of Super Mario Bros. 2, Super Mario Bros. 2: The Lost Levels, Ice Hockey, Wario’s Woods, Zelda II: The Adventure of Link, Dr. Mario, Kirby’s Adventure, Super Mario Bros. 3, Kid Icarus, Punch-Out!!, Metroid, and NES Open Tournament Golf. 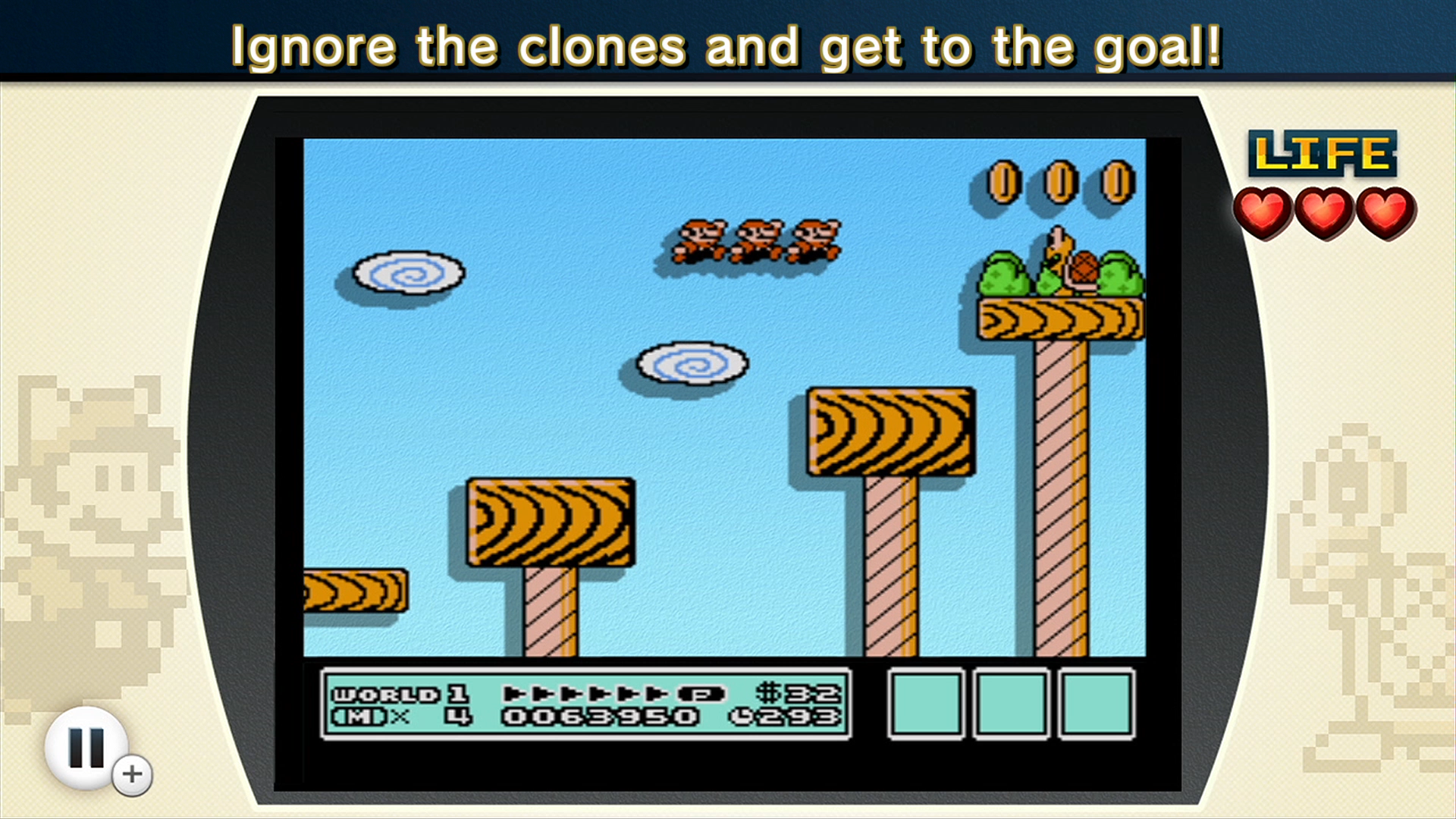 The first remix I sampled from the new game was from Super Mario Bros. 3. The goal was to play through a portion of Stage 1-6 but, of course, there was a catch. The Mario character was split into three on screen. This was just meant to cause a distraction as the only true Mario was in the middle. The two extras were nothing more than ghostly illusions, though they looked exactly the same. While this caused an unexpected distraction, causing me to fail the familiar level on my first run, the confusion was quickly overcome on my second attempt. Not the most creative remix, but in the game’s defense it was one of the first stages. Additionally, I only earned three stars for completing the challenge with some mistakes, and wasn’t awarded the game’s coveted triple rainbow stars .

I then witnessed other Nintendo World Report staffers take a stab at different remixes. One, from Dr. Mario, saw pills thrown into play given their Game Boy Dr. Mario black and white color scheme. This made the challenge of clearing the screen of Mega Viruses even more difficult if the player didn’t look at the pill before it was thrown. 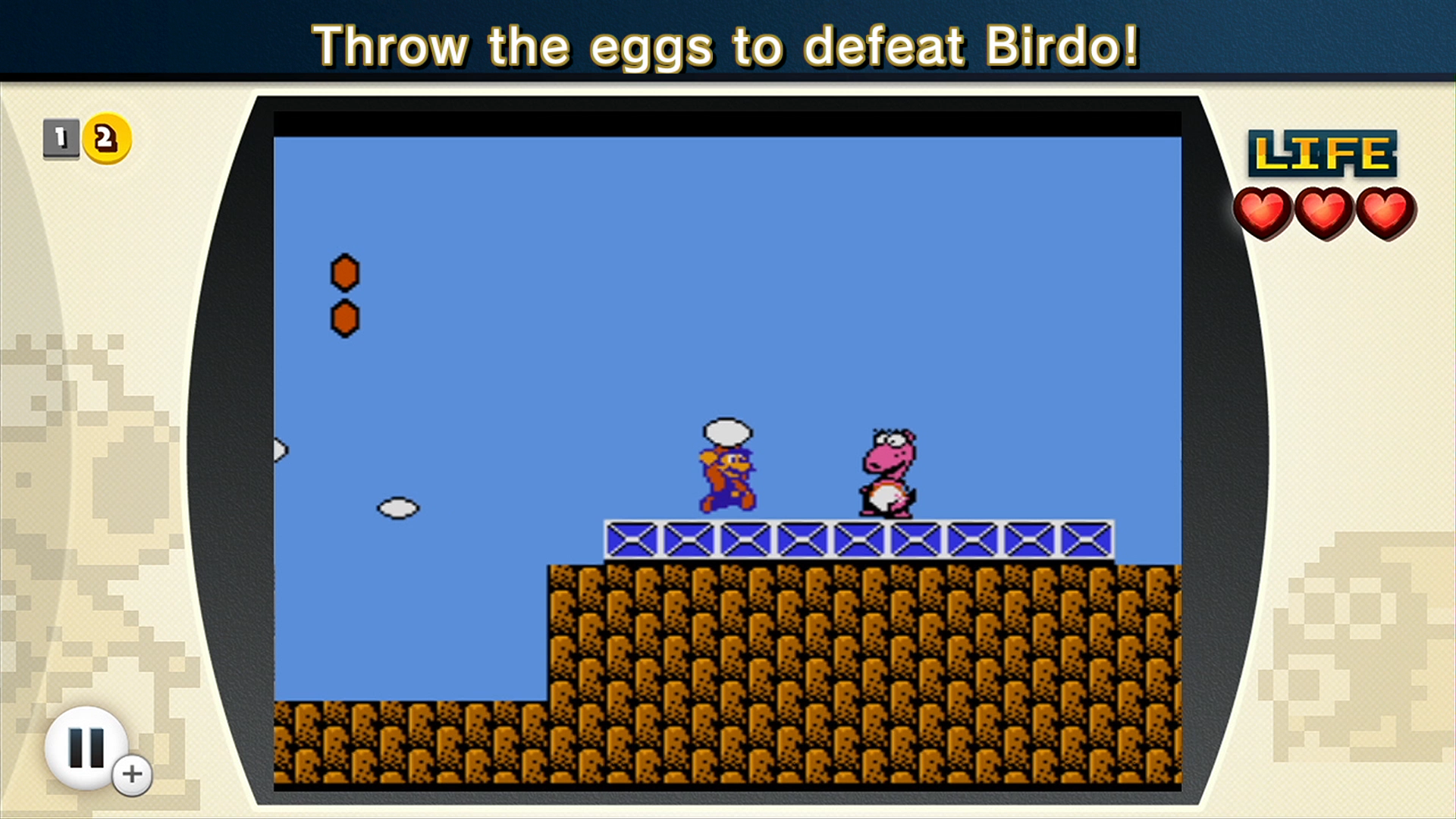 Other stages on display included having to pluck a certain number of turnips in Super Mario Bros. 2 with Toad before the time limit ran out. Another had Kirby in a Super Mario Bros. 2: The Lost Levels stage with the goal of collecting all the coins.

Despite the similar game layout, I walked away from the standard portion of the game excited to collect all the triple rainbow stars all over again. Yes, the format is the same, but like the first NES Remix I can tell that this sequel is going to teach players a variety of techniques, from beginner to advanced, in order to play each newly remixed title and, once again, expect mastery of these skills in order to get the best rank. It’s a fun challenge, especially since each stage, or stage portion, is very short which entices players to give it another go. 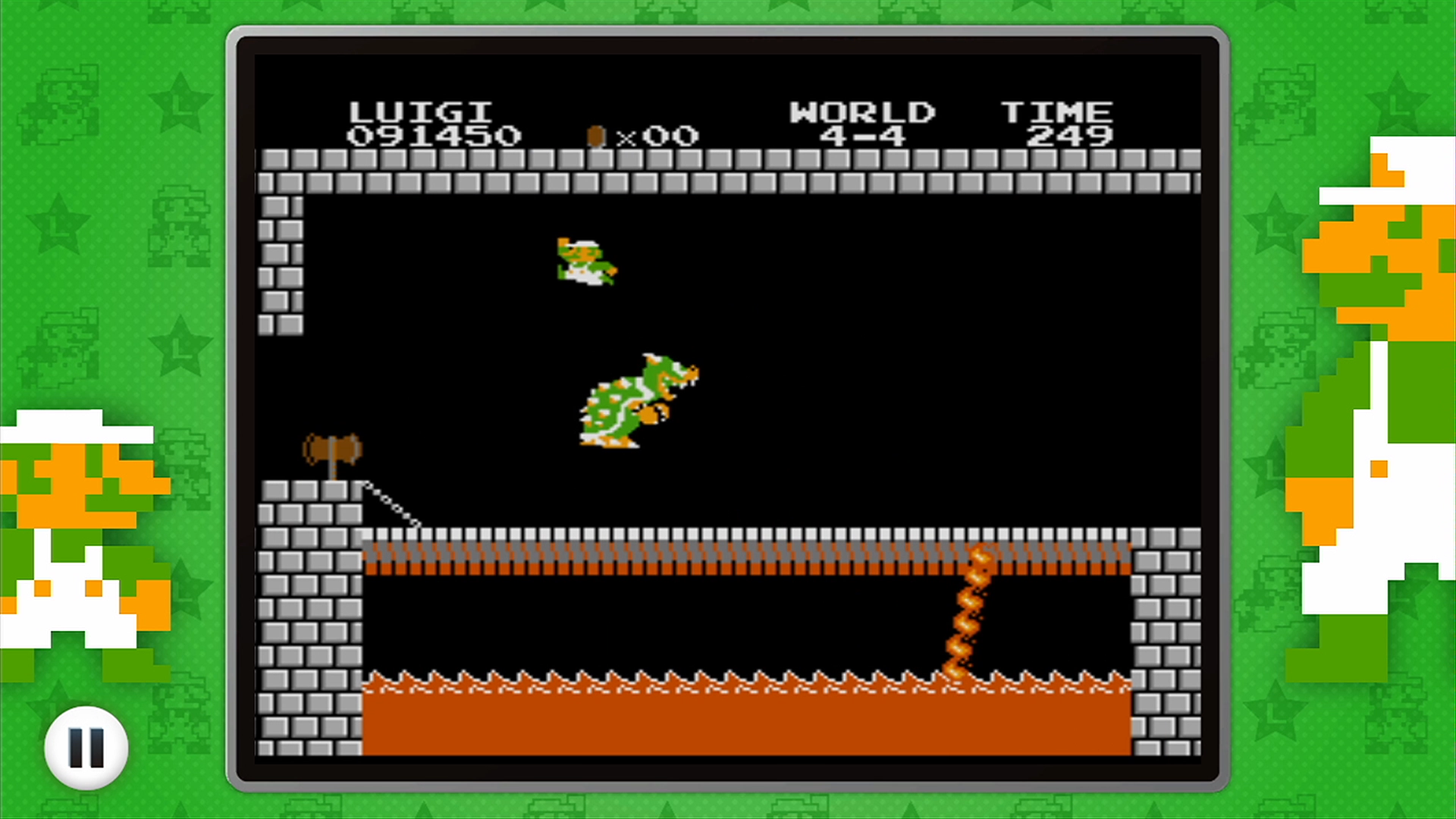 Even better news for NES Remix 2 is that there are two new modes being added to the game. The first is the inclusion of Super Luigi Bros.. This mode is essentially a mirrored version of the 1985 classic, Super Mario Bros.. The only playable character in this mode is Luigi and he controls very differently than his red clad brother. Take it from me, a Super Mario Bros. veteran who can easily clear the game in under six minutes. Having to play as Luigi, who jumps a bit differently and higher, threw my game off completely and made easy stages a nightmare. I’m looking forward to try my favorite game of all time in an entirely new way.

The second new mode, which we didn’t get to try, is called Championship Mode. This mode promises to be akin to the Nintendo World Championships game played in 1990, but with different games. It will have players go through a three game scored gauntlet playing Super Mario Bros., Super Mario Bros. 3, and ending on Dr. Mario. High scores earned in this mode, and for any remixed played in the standard game for that matter, will be able to be posted to Miiverse. The only bad news about Championship Mode is that NES Remix 2 players must also own the first NES Remix in order to access it. 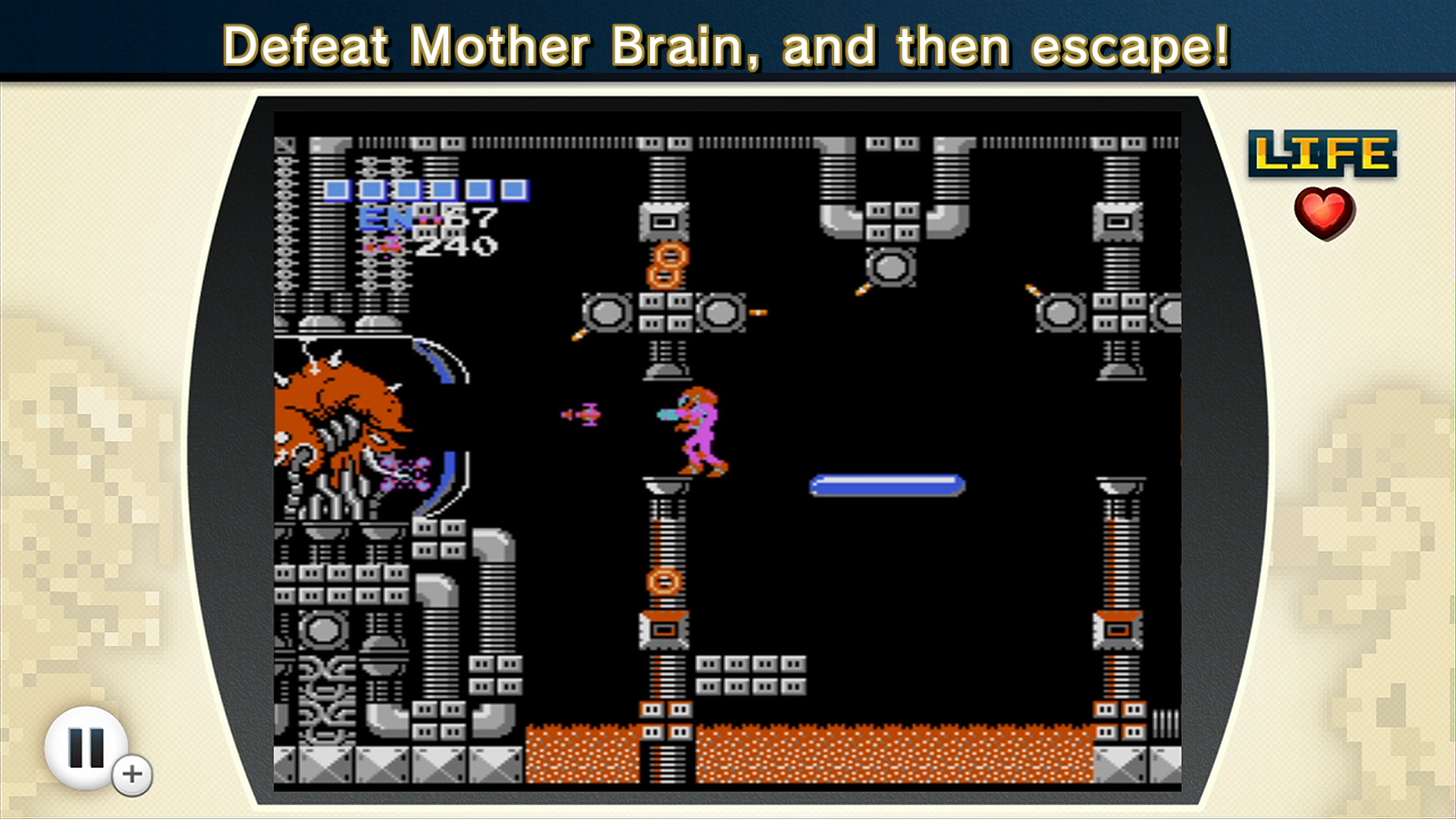 Overall, NES Remix 2 is shaping up to be another delightful nostalgic trip for us older players, and a great way to learn how to play, and get interested in, these classic games for younger players. If you loved the original NES Remix, you will probably enjoy this as well. If you liked the concept of the first title, but weren’t feeling the games that ended up being remixed, you should definitely consider getting the sequel. NES Remix 2 releases on the Wii U eShop on April 25 for $14.99 and, personally, I can’t wait.

Will this game be cheaper for those who own the first game?

Will this game be cheaper for those who own the first game?

I'd hope so! However, there's been no word or anything.
I'd personally double dip on the original if the Japanese physical release that contained both 1 and 2 on the same disc came out over here.