Never in a million years had anyone guessed that Tamsoft's cult classic busty ninja schoolgirl game would be localized for release outside of Japan, due to obvious reasons.

For those who don't know, Senran Kagura is a side-scrolling 3D beat 'em up revolving around the Hanzo National Academy, a high school with a secret curriculum for training modern-day shinobi ninja. The story follows the adventures of five female students learning the assassin trade, who must go up against criminal ninja girls from the Hebijo Academy. Burst is actually the second title in the series, and features the entire first game as well as a second storyline featuring the Hebijo girls. It was considerate of Xseed to simply jump right to the second game for the translation treatment as it's a much better deal. 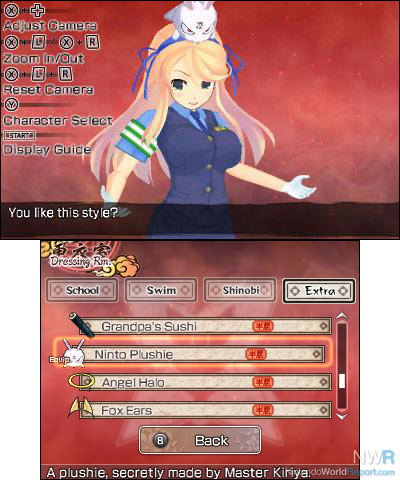 The game's biggest draw is that your playable character's uniform has a separate health meter to the character herself. Taking repeated damage will cause the uniform to slowly shred away until nothing is left, resulting in additional damage taken to her HP. Each character appears to have a ludicrous bust size that seems almost out of place for the slightly chibi art style, and the inflated mammaries bounce around on the screen in 3D as if they were, well, inflated. The art style is quite pretty despite the anatomical oddities, and the in-game models as well as the drawn character cels look crisp and pleasant, except for one oddity: the texture maps on the girls' bouncing bosoms occasionally look stretched and distorted as if someone had used an N64-era "bigger boobs" cheat code, which would certainly explain the proportions seen in the game. The 3D effect switches on and off, usually only showing depth during transformation sequences and dialogue scenes. The backgrounds are detailed enough to have benefited from 3D layering, but it's not a huge loss.

After playing the first few missions, I can say that the game merits praise for being a decent beat 'em up, with tight, responsive controls and a slick retro arcade feel. The story is overly silly and the cast consists of predictable, clichéd anime girl personality stereotypes, but it's light, digestible drivel that's entertaining enough and only serves to tie the levels together and halfway explain the scenarios; you don't play a game like this for the riveting narrative. Nonetheless, it's easy to form quick, if shallow, fondness for the cast and I'm interested to see what happens to them throughout the remainder of the game.

I especially like the audio. The original Japanese voices are used for the game with no options for an English dub, perfect for a game like this. The music consists of Naruto-esque modern-classic Japanese instrumental rock, and it sounds great. It also looks as though there is a huge amount of unlockable costumes and bonus content, including animated movies, picture galleries and more.

I won't go into any more details at this point, but keep a watch out for our full review coming soon.

This game has a very expansive plot, I'll give it that much.