We dial up a demo for Hudson's new survival horror game, and it shows some promise.

Calling is a much different type of game than the usual fare that Hudson has put out lately. It holds no reference to Bomberman and it isn't a mini-game collection. Instead, it is a survival horror game centered on a mysterious web site called the Black Page. The web site is rumored to have some connection to the Mnemonic Abyss, the space-between-space, and only certain people can actually see its contents.

The game focuses on four people who can see this space, and each character has their own interlocking story. The majority of the game takes place in the Mnemonic Abyss as each character is summoned there after seeing the Black Page.

The demo we played recently didn't show off the mysterious space-between-space. Taking control of otaku Shin Suzantani, we began in a derelict and mysterious bedroom. The game is played in a first-person perspective, and controls much like you would expect it to as the pointer is used to aim, and the analog stick is used to move. You can interact with different objects using the A button, which places you in what is known as Search mode. You can then open drawers or doors using motion controls to see if there are any suspicious objects.

After interacting with everything I could in the room to no avail, a cell phone began to ring. Cell phones play a big role in this game, and you answer them by pressing the minus button and holding the Wii Remote speaker to your ear. Personally, I'm a big fan of this utilization of the Wii Remote. It's a bit gimmicky, but in horror games, it really helps to bring you further into the game. While the phone's functionality is limited in the demo, it has a lot of potential for the final game. You can take pictures with the phone and upload them to the Wii Message Board, you can call other characters, and more. At this early stage in Shin's story, it doesn't do anything more than act as a plot device.

Once you answer the phone, a door pops open, and you can then leave the bedroom. It's very dark as you exit the room, and after some slow-placed and spooky ambling, you wind up at another door, which is locked. All of a sudden, your Wii Remote speaker goes off as a voice beckons you to not enter. When you turn around, a ghost grabs hold of you.

This appears to be the "combat" in Calling. When a ghost grabs you, apparently trying to drag you away to your doom, you must shake the Wii Remote vigorously and force them away before your character becomes too terrified to repel the ghost.

After breaking free from the ghost's grip, the door opens. Going through it, you discover that there is a dead body hidden behind a blocked sliding door. Suddenly the door shuts behind you, and you become too terrified to move. When this happens, the screen receives static and you can only move around in a circle until you examine the surroundings.

There are some creepy dolls off to the side, and then a black cloud emerges from the dolls. You are then instructed to get out of there. After returning to the bedroom at the beginning, a rotary phone rings. Upon answering it, you go to a cut scene where poor Shin is possessed and assumingly taken to the Mnemonic Abyss.

The demo presented some decent possibilities, namely the cell phone and the exploration, outside of its heavily scripted nature. Calling promises alternate endings, which means it hopefully won't be so linear. The graphics look good in cut scenes, but under the lack of light during gameplay, the graphics look dated and muddy.

It seems like the selling point for Calling is the story, which is too mysterious for its own good at this point. The demo began with a snore-worthy scene during which you read text from a chat room as you were shown video of character typing at a computer. Apparently this Black Page site is a force to be reckoned with, but there's too much ambiguity. With any luck, the final game will feature better pacing and livelier cut scenes.

Calling is rated T for Teen and is set for March 2010 release. 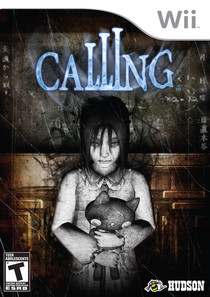