I played the next title in Majesco's Go Play line recently. The game, Go Play City Sports, is a lot broader than the first two games in the series, Lumberjacks and Circus Star, which suffered from a lack of variety. 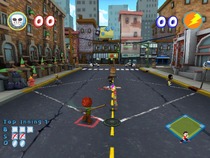 Stickball compares favorably to most Wii baseball titles, and offers a similar control style wherein the Wii Remote's motions are responsible for hitting, pitching, and fielding. It's genuinely fun, and the city touches make the game a lot better. The bases are trash can lids and the like, and home plate is a manhole cover. There are also city rules for this sport. For example, if the ball bounces off the buildings that line the field, it's still in play. During the demo, I robbed my opponent of a home run because the ball ricocheted off the wall and into my player's glove. Unfortunately, I also gave up a home run because the ball bounced off the wall and became a four-bagger. 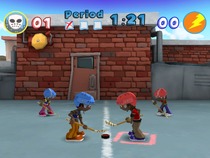 The street hockey, which takes place on a roof, was very reminiscent of a similar sport in Deca Sports 2, except better. My main issue with Deca Sports 2 was that almost every shot on goal went in, but City Sports doesn't do that, and it doesn't even have a goalie. Instead of a goaltender, there is just a large cone that sits in goal, waiting for players to slap the puck at it, hit it out of the way, and score. It makes the game a lot more fast-paced and more of a war of attrition. It controls well, making use of both the Wii Remote and Nunchuk with motions controlling the strength of the shot.

Like the two earlier games in the Go Play brand, Go Play City Sports also seems to have a good personality and sense of humor. The different teams that you can choose range from robots to rabbits, and the characters are cartoony. It's a nice aesthetic, and hopefully the finished product will be a good, full-featured sports collection when it launches next week.

Check below for gameplay videos of three of the other sports: handball, jump rope, and kickball.

I thought the million dollar question was why do you guys keep putting effort into writing articles for games no one is interested in?

I thought the million dollar question was why do you guys keep putting effort into writing articles for games no one is interested in?

This is crossing the trolling line and getting personal. Keep the two subjects apart and we should be fine.

It wasn't meant to be trolling, and if it came across that way I apologize.

Neal obviously put effort into writing this article but unfortunately, it will be largely ignored because it pertains to a game that doesn't cater to NWR's audience (at least what I think that audience is--as Jonny mentioned 90% of NWR readers don't frequent the forums).  In this particular case he had to give impressions on this game in order to play A Boy and His Blob--which does interest forum-goers--so I guess that's the price you pay.

Yeah, we sometimes have to put up with certain games just to get to the games that both the readers and staff members are interested in.

It doesn't sound like this is going to be much better than the previous two games in the series. I predict it'll get a 4.5; slightly better but still bad!

In kickball it looks like you﻿ either hit an out or a home run. Not very balanced. The jump rope game looks pretty confusing as well.

Why do videos on YouTube for games like this always get low ratings? Don't shoot the messenger!