Growing something turns out to be a lot more involved than just cooking it.

The Cooking Mama series has proved to be a successful for Taito, but now instead of making a cooking trilogy, they have gone a new route with Gardening Mama.

Anyone familiar with Cooking Mama will immediately be at home with Gardening Mama. Instead of choosing a recipe to follow, players choose a particular fruit or vegetable they would like to grow.

In the Tokyo Game Show demo only two flowers were available to grow, and I chose to grow some tulips.

The first minigame is simply picking out the best looking bulbs, requiring players to pick out one that matches the picture on the top screen.

It may sound simple enough, but you also had to open the bag of bulbs first, that involved taking out the staples and cutting the top off.

Sorting through five bags of bulbs to pick out five that were perfect turned out to be quite challenging within the time limit.

Next up was preparing the soil for planting. First, players had to turn over the soil with a trowel achieved by following on screen directions with the stylus.

Then you were given a choice of manure to use, a vegetable-based one or from a cow. After cutting the bag open, this minigame had players tipping the manure bag until a perfect amount had landed in the trench.

There were another couple of stages of preparation before the ground was ready for planting. That’s when the hole making and bulb dropping stages could start.

After the bulbs were planted, careful measuring of water into the watering can was required, all under the watchful eye of Mama.

The watering stage was quite fun and probably the most “game like” available to play. Players had to water the flowers in specific patterns to satisfy Mama; a zig-zag, a curve, a star-shape and plenty more in between. When I was successful I was rewarded with a rainbow of victory hanging over the flowerbed.

By this time I was somewhat overwhelmed by just how many stages there were to even reach the stage where the flowers were fully formed.

However after my tulips had finally started to grow and were looking happy, it wasn’t over.

Evil bugs started attacking my flowers and it was up to me to spray them to death using my super-charged bug spray.

When it was all over, I felt like I had really achieved something, as I had participated in every single minute stage of the flower's development.

I’m not sure how fun it would be to repeat all these tiny details again and again for other plants, despite the process being different for each one.

I would assume fans of Cooking Mama might be used to doing these kinds of minigames, but I just found a great deal of them to not be that fun to do.

I'd like to see Taito trim down the amount of games to just the few that are the most fun and concentrate on those, as I’d assume not many people would want to play a “remove staples from a bag” game that many times. 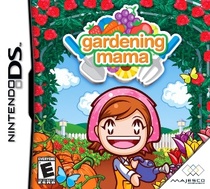