A throwback to the good ol' days, but does it deliver? 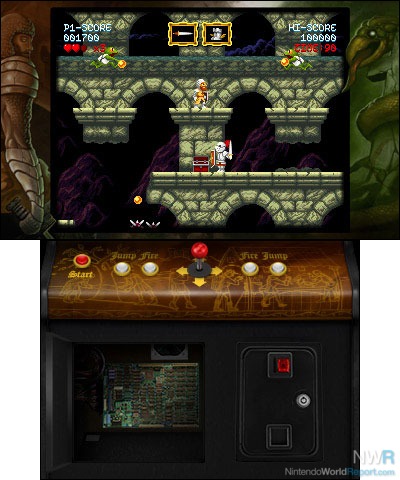 A curse has swept the land. You are Don Ramiro, a sword-wielding knight hired by the King Alfonso VI to rid the land of the aforementioned curse, and seemingly the last hope of survival. The journey before you includes horrifying monsters, demons and skeletons along many dangerous landscapes and castles. Though it will be a very difficult and arduous adventure, you will overcome the cursed land of Castilla, and experience a beautiful and unforgettable game while doing so.

Cursed Castilla EX is a retro-inspired sidescrolling action game created as an homage to classic arcade gameplay. The 3DS version makes great use of the systems' capability. Immediately when booting up I was welcomed to a virtual arcade cabinet, with the lower screen even having functional touch controlled buttons. On the top screen, I was treated with a wonderful stereoscopic 3D display to help showcase the beautiful spritework. And to top it off, a great chiptune soundtrack fully immersed me right back into the arcades of my childhood. 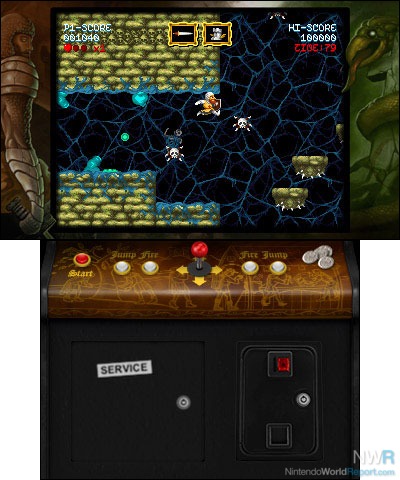 The gameplay is pretty simple and straightforward from beginning to end. You start out with a sword as your main weapon, but you can acquire many different weapons (daggers, axes, etc.) to swap out in treasure chests scattered throughout each of the levels, with all weapons working differently as you'd expect. Other sub weapons can be found in chests as well, like a shield for added defense or a blue fairy for added offense.  Many different kinds of enemies inhabit the land of Castilla, each of them with different sizes and attack patterns. As I've said before, this game is dang hard, and a lot times I died just by the small enemies I encountered before the bosses of each level. Luckily there are unlimited continues, so dying doesn't become such a huge bother, you just lose your point total you accumulated thus far.

One of the biggest highlights are the bosses in the middle and end of every level. These are usually epic and heart-pounding, and learning how to masterfully take down these huge monsters is very thrilling, rewarding, and satisfying. 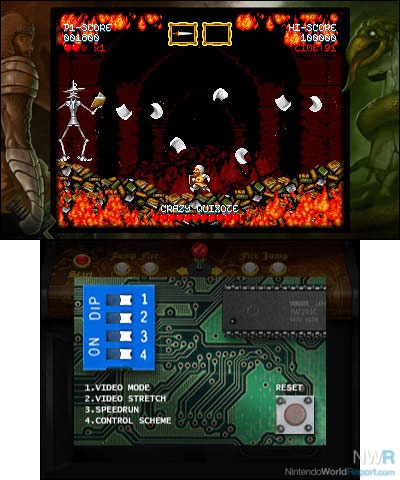 Overall, Cursed Castilla EX is a fantastic game that accurately recreates the brilliance of the 16 bit era. The whole time it felt like I was playing a classic SNES Virtual Console game, with a killer soundtrack and added 3D effects. If simple old-school gameplay, beautiful pixel art, and a hardcore difficulty is up your alley, then this game is a no-brainer. So take your sword and expel the curse of the land, not for the King, but for Castilla!

Played through the whole campaign.