Explore strange new worlds with the power of SCIENCE!

Now here’s a strange little game: equal parts PixelJunk Shooter and Affordable Space Adventures, with some real-time strategy thrown in to the mix, NOVA-111 scratches a very particular itch that I didn’t realize needed scratching. You guide a small spaceship through maze-like environments one space at a time while avoiding enemies, solving puzzles, and using the ship’s ever-expanding repertoire of abilities to rescue fellow scientists and find the exits.

Each time your tiny ship performs an action, everything else on the map that’s capable of performing an action also does so. In that way, NOVA-111 is a little bit like an old-school roguelike. Even though you’re operating on a sidescrolling 2D plane, each stage is very clearly an X-Y grid. The joy of discovery is in figuring out how new enemies and environmental obstacles operate. Your ultimate goal is simply to use your ship’s powers (a beam attack, Xeodrifter-like phase ability, and a brief time stopper) to explore each stage fully without dying while also rescuing scientists and discovering treasures. A larger meta-goal is to make it to the exit using a low number of moves. Every level is made up of several stages, and upon completing them all, you are graded based on time taken, number of moves taken, secrets found, and scientists rescued. 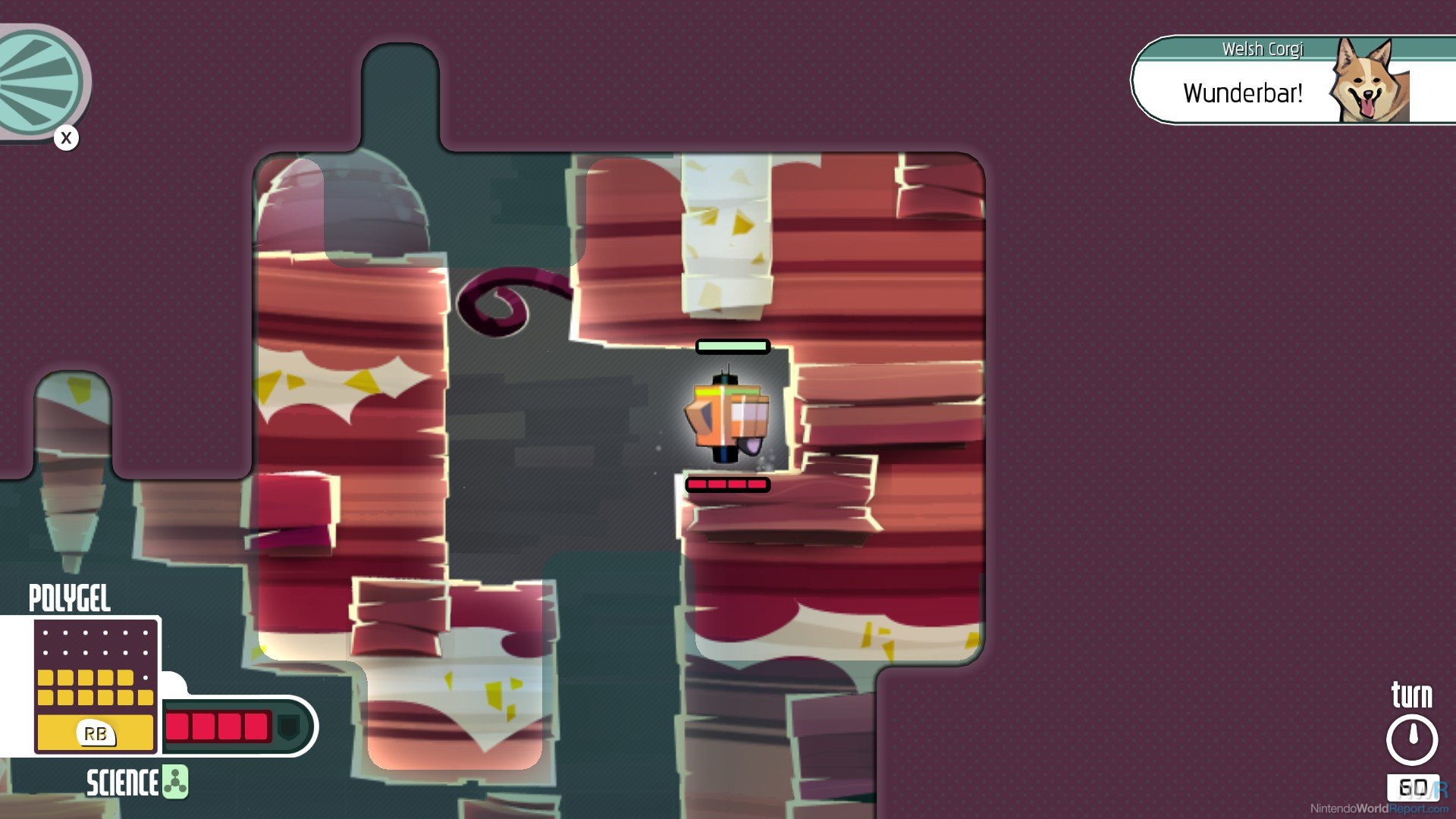 However, it’s here that NOVA-111 presents what I consider its biggest trip-up: the icons for each cleared level (which you can replay) are unclear, and the minimalistic electronic manual is silent as to their meanings. There’s a star, a little people icon, and a thumbs-up symbol. What do any of these mean? What should I be trying to do upon replaying the level? Also, when I clear a level and I’ve found more than one scientist, why does the tally show just one (of, say, eight) scientist(s)? Does that mean it miscalculated the number I found or does it mean I have one LEFT to find?

Why wouldn’t it say that from the get-go? Maybe it does! It’s not explained!

The game is otherwise very pretty and entertaining. The on-screen banter of your science crew usually provides some chuckles and the occasional hint. The environments are somewhat abstracted but character sprites are detailed and full of personality. The music is subdued but appreciable. Keep an eye on your map (displayed on the Game Pad) because it may show you where secret paths are located that are virtually invisible otherwise.

As you might imagine, the game ramps up in complexity fairly quickly and once you have all the ship’s abilities, you start gaining things like lower cost to use bombs, more armor, or more “points” to use cooldown abilities. It’s all very smartly designed, if sometimes a little overdesigned. I wish the ship’s surrounding view were a bit larger. It never feels like you have a great view of the environment. I see what they were going for, but it’s a little too confining.

Despite that, and my problems with the iconography, NOVA-111 is a surprisingly fun sci-fi romp that I think most of you would get a kick out of.

Aw, I thought this was a word game. :( You need to add an L to "word" in the tagline. :P
This game sounds like a load of fun, though. I got other Wii U indie games alone to get through, but I definitely will check this out once those are completed.