As the title suggests, the Gunman Clive HD Collection takes the beloved indie darling and its sequel, already on the 3DS, and puts them on your big screen TV in HD. Both of the games are wonderful, and even if you’ve played them once on your handheld, they’re worth replaying here.

The Gunman Clive games are essentially Mega Man games—run-and-gun platformers with a unique “Take On Me” art style and seriously underrated music. They each feature plenty of nods to other franchises, but the Mega Man provides the bulk of inspiration. You can select from three characters in each game (Chieftain Bob is now playable in the first game) plus one hilarious unlockable character. Clive is the straight man, with no tweaks to the gameplay. Ms. Johnson plays similarly but can float briefly through the air, like Princess Toadstool in Super Mario Bros. 2. Chieftain Bob requires the most skill, as he doesn’t have a gun—just a spear which he thrusts forward. Certain bosses are significantly tougher with Bob.

The original Gunman Clive is ridiculously short—maybe a half-hour long—but endlessly replayable with its different characters and difficulty settings. But it’s also fairly straightforward. Gunman Clive 2 is more colorful and diverse in its gameplay. There are several Star Fox-esque segments, a few horseback sequences, and at least one frustrating panda-based level. The sequel is more experimental, but also has a few too many “gotcha” moments that can be tiring. I will say, though, that it has a downright amazing final boss. 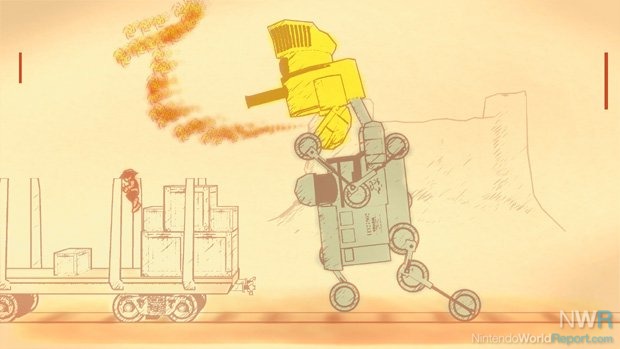 I can’t say anything looks wildly different on my TV. You can appreciate the little things more, like how colors pop or the textures on the dinosaurs in the sequel. This speaks to the quality of the art direction more than anything else. Basically, the Gunman Clive games already look great—and they look just as good, but more appreciable, on your TV (and yes, the game does support Off-TV Play).

If you’ve never played the Gunman Clive games, get on that. They’re wonderful, no matter what you’re playing them on. For old pros? I think this HD Collection is worth the double dip—if for nothing else, then for Chieftain Bob’s ending in the first game.

Got spoiled on that Chieftain Bob ending. That's amazing.

Great games, both. First is perfectly fine, but man, second game is just great. Creator went all out and then some.