Anyone want another Mario Kart game on Wii U?

OK let’s get the weird facts out the way first; by the end of 2015, there will be four Mario Kart games available to download from the Wii U eShop - two of them handheld games. Additionally weird is that aside from Mario Kart 8, none of them offer the staple local multiplayer modes, immediately negating a large portion of the games. 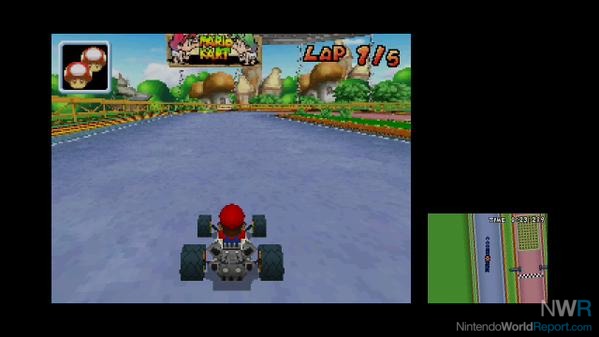 Mario Kart DS is most famously known for kickstarting the Nintendo Wi-Fi Connection on the Nintendo DS. Here on Wii U, that mode functions as a reminder that the service no longer exists, as it is completely non-functional. This basically makes Mario Kart DS a single-player-only game, which leads into the more positive part of this review because it has one of the series’ best single-player modes and it is awesome. The missions in Mission Mode consist of several short challenges that are designed to teach you how to use the items or skills you’ll need to be a successful kart racer. Things start off easy like powersliding through gates or shooting green shells at Monty Moles, but this leads up to some devious time-based challenges and boss battles. There is an incredible amount of variety here, and every course and character is used. There are even unique stages only used for this mode. Online leaderboards didn’t exist back then - nor do they now - but you are given a three-star rating after every mission so completionists can enjoy perfecting every stage then bragging about it on Miiverse.

Grand Prix is the mode that unlocks new racers and karts and like the Mission Mode, a grade is given after completing every cup and this matters if you want to unlock everything. The rubber banding is not quite as bad as the later console games, and the blue shell can be defeated with a well placed bomb. There are some great new and retro tracks here, with Waluigi Pinball and Delfino Plaza being the most memorable. There is something fitting about playing the SNES stages in this retro style that pleases me. 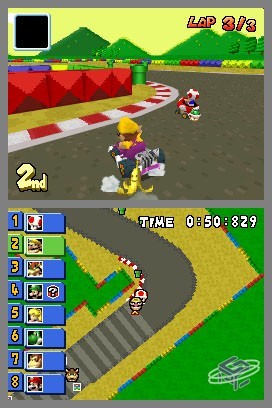 The only other mode open to play is (ironically) the Battle Mode. Here you can play against seven CPUs, individually or in teams, and fight it out in Balloon Battle or Coin Runners. The seminal N64 Block Fort makes an appearance, and really makes you lament its absence in Mario Kart 8. Display methods work surprisingly well on Wii U, splitting the screens across the TV and GamePad look fine, as does putting both screens on the controller for off TV play.

Mario Kart DS is a weird game to recommend when it’s on a console with a modern version that has functional online modes and beautiful HD graphics. However, it is nice to play through Mission Mode again, one of the best Mario Kart single player modes outside of Mario Kart Wii’s (also defunct) tournament mode. If you’re fine with having a completely single-player Mario Kart game, go ahead and download it; it’s one of the series’ best. If not, Mario Kart DS is probably best left alone!

you for got the most important + feature of all, though!

+Snake to your hearts desire and never worry about pissing off anybody online ever again!

I think that's a fair score for a re-release of a game where HALF THE CONTENT IS MISSING.

Though we just need 64 (probable) and 7 downloadable on Wii U to have all of the good Mario Karts on one system.

If there were a way to play this in local multiplayer I'd probably buy it, because Lucariofan's right on this one, it's easily the best battle mode in the series.

If there were a way to play this in local multiplayer I'd probably buy it, because Lucariofan's right on this one, it's easily the best battle mode in the series.

I had a crazy idea on how to make GBA/DS games on Wii U thing actually make sense.

They could run two/four/eight simultaneous games running on one screen, each in their own separate area on TV. And emulators are rewired to make an illusion that these games are running in one wifi area. Similarly with GBA games and link cable.

Outside of that i really don't see the point of DS/GBA on Wii U.