The Dragon Ninja is back to destroy a sword. This time he can climb walls! 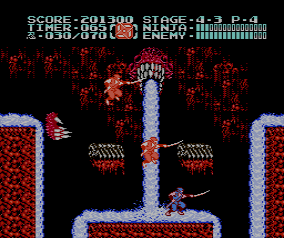 Ninja Gaiden II: The Dark Sword of Chaos is one of the better sequels out there. It takes the delightful and difficult gameplay of its predecessor and makes it a little bit more inventive and fair. Birds are still demon spawn from the bowels of hell and do a ton of damage, though, but you can now freely climb up and down walls, and you have a few new handy power-ups. The best of them all is the one that creates a shadow version of Ryu that trails your avatar and performs every action you do.

The 1990 NES sequel picks up a year after where the original left off and weaves an often convoluted but usually entertaining story about Ryu Hayabusa and his quest to fend of Ashtar, save CIA agent-turned-lover Irene Lew, and destroy the titular chaotic sword. The cut scenes that pervade every stage break might be dated, but they’re smartly used and rarely outstay their welcome. 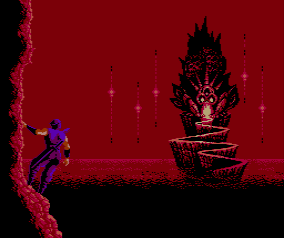 Ninja Gaiden II is creative from start to finish, with a slew of interesting ideas that are awesome and tough. In Stage 2, the wind direction is represented by lines of rain that slant left, right, or straight, making it a unique spectacle. In the following stage, a section of the level is played “in the dark” where you can only see where platforms are when the lightning strikes every few seconds. The whole experience is littered with similar concepts that delight and challenge.

With its 3DS Virtual Console release, Ninja Gaiden II is now a little more friendly for newcomers thanks to save states. Not to worry, though, it’s still the same fantastic and hard adventure through novel locales filled with demons, birds, and more.

I'm totally going to pick this up. I always hoped they would release this on the European Wii VC, so it's nice to finally see this being made available for download on a Nintendo platform in Europe.

Such a great action game.