A worthy swan song to the Game Boy color. 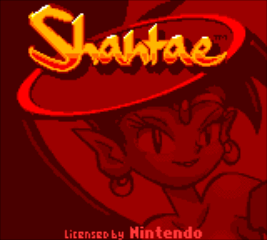 Shantae came out in 2002, a year into the GBA’s lifecycle, and about two dozen people played it. Its legend as a hidden jewel in the system’s library grew and grew, and it became impossible to find legitimately (or affordably). Now, in the year of our Lord 2013, this spry GBC game has been released on the 3DS Virtual Console, and you should buy it, because it’s wonderful.

Shantae pulls off graphical tricks that GBA games didn’t: color palates that change color depending on the lighting or time of day, parallax scrolling, music that seems way too good for the hardware it’s running on, and amazing animation. Of course, for people who are only familiar with Risky’s Revenge (the DSiWare sequel), Shantae will be harder, longer, and more obscure. Nothing is really explained to you, but experience with the DSiWare game may give you a leg up on the mechanics of its predecessor.

The game’s real draw, apart from the insane production values, are the four well-crafted dungeons where Shantae learns her trademark transformation dances. By finding four baby Warp Squids in each dungeon, she can also learn dances that warp her between towns. There are also mini-games to play, heart containers and fireflies to find in the overworld (giving the game a slight Metroidvania feel) (very slight), and modifications to your transformation powers. 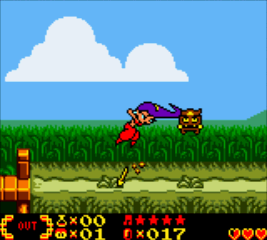 My criticisms include enemies having twice as much health at night, an incredibly linear overworld, very expensive attack upgrades, and some particularly lengthy overworld sections that probably could have been shortened significantly or cut entirely (ooh, another forest area). Shantae is otherwise a pretty flawless experience and a quite humbling one when you realize it was running on the Game Boy Color.

I really expected this mini-review to consist of "Shantae.  Buy it."

I haven't picked this up yet because quite frankly I'm playing too many games at the moment. Between Resonance, Crimson Shroud, New Leaf, Oracle of Seasons, Mighty Switch Force 2, Warioland 3, and several others, I can't in all good conscience bring myself to buy yet another game.

Having said that, I cannot wait to play this game!