Samus' most influential game rolls onto Wii U.

What can I say about this game without degenerating into fanatical drivel praising Super Metroid as one of the best games ever made? How does the game fare by today's often jaded and cynical stance on the industry? Has Samus' Power Suit rusted over time? Read on! 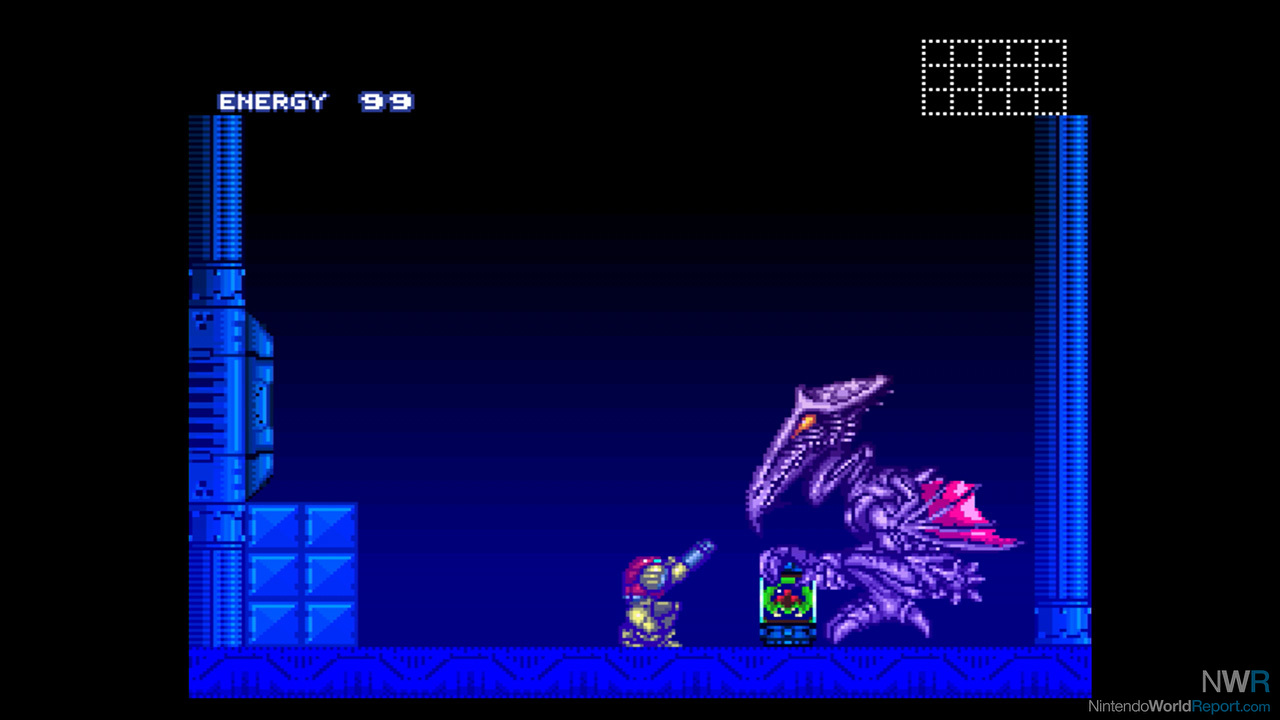 If you haven't played this or any other Metroid game before, the experience can be a little daunting at first. A brief recap of the last two games is all the introduction you'll get before you're dropped right into the action. There is nobody to talk to, nobody to give you directions, and no on-screen tutorial on how to shoot or jump or open doors. Samus is alone on this hostile alien world; isolated from all human communication, and it's up to you as the player to experiment and see what works in which situations. To me, this is a prime example of perfect difficulty in a game: it won't hold your hand the entire way, but it encourages exploration and experimentation and rewards you all the more richly for doing so. You're not forced to follow a set path or collect every item, but the more you put in to looking around and figuring things out for yourself, the more you'll get out of it. Each new item has its uses in both battle and exploration, and it is this style of creatively sealing off paths until you have the right equipment to proceed that set the standard for both this series and copycats alike. I especially love how this game takes place on Planet Zebes, the location of the original Metroid on the NES. In the first half of the game you will come across many areas that Samus previously traipsed through, even the ruined remains of Mother Brain's original hideout! It's this continuity and attention to detail that gives this game such unmatched atmosphere and life. 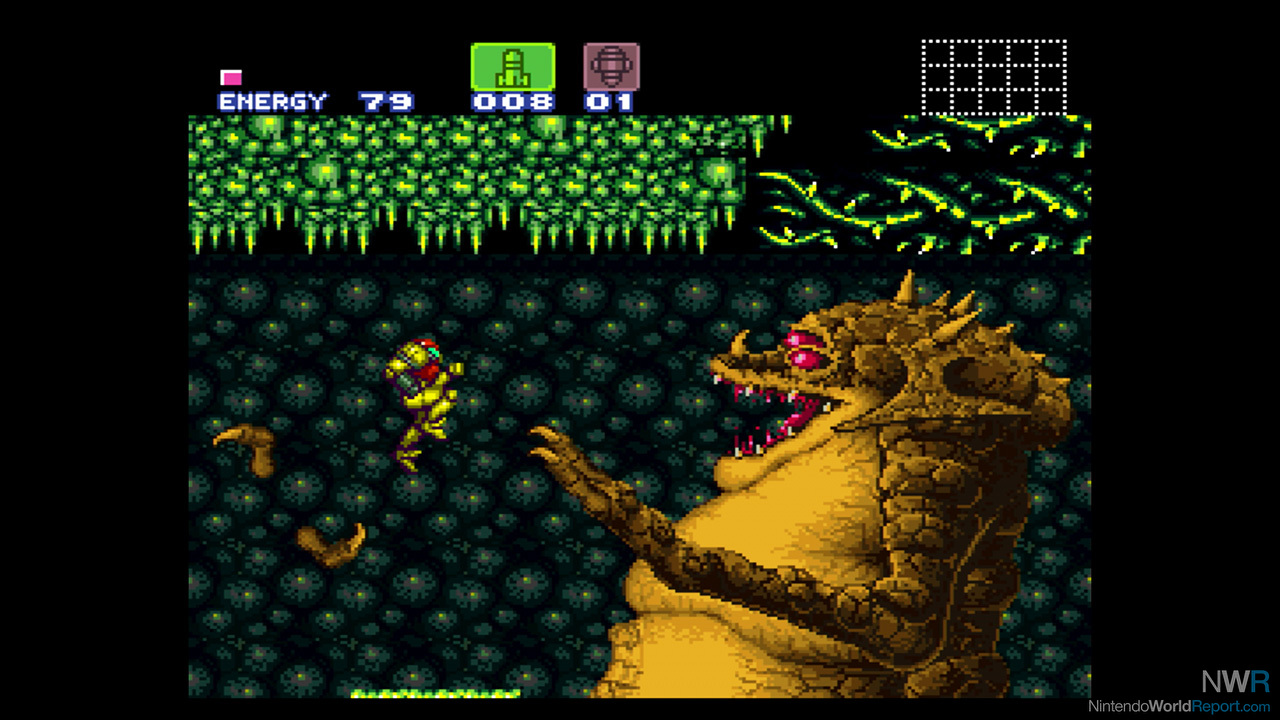 Granted, some aspects that were minor hindrances in the original version are seemingly more apparent today when compared to newer games in the series. Holding a separate button to activate your Speed Booster while jumping and shooting often feels like a clumsy juggling act, particularly when experimenting with a certain hidden move later on. As you progress through the game you'll obtain an increasing amount of secondary weapons, with only one button to cycle through them one by one. This can become hairy in the heat of a boss battle that requires quick contextual toggling of the different Beam shots, Missiles or Power Bombs. These are all mere learning curve issues though, and once you're familiar with how things work, try idling on the title screen for a few minutes to see a collection of secret advanced moves to try! 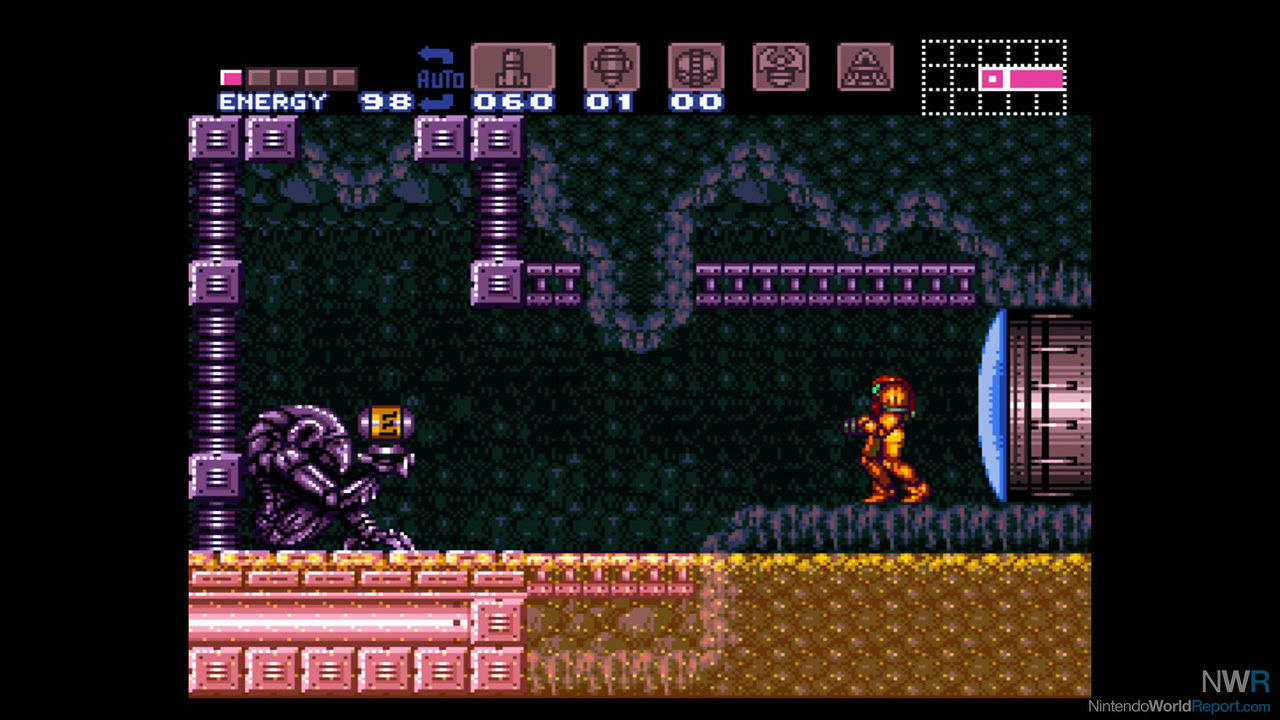 The visuals have never looked better as they're pumped through the Wii U's HDMI cable; the ambient sound effects and eerily catchy soundtrack are as memorable as they were back on the SNES. Playing on the GamePad has proven to be just as effective as it ever was on the SNES, and the off-TV play offers dozens of advantages. Not only does Super Metroid hold up today, but it also taunts a superior standard of game that has been lost amongst the slough of oversimplified, handholding Super Guides and tutorial levels that are sadly becoming the norm. There is no excuse for not owning this masterpiece.

I can't support anything less than a 10.

Since this review touches so much on the difficulty, "super guides" and such, I'd like to highlight this video.  It demonstrates just how masterful the world design was in this game, and that comes from it letting the player see something in practice rather than simply hear about it.

It actually reminds me of another interesting observation that one of the most effective tutorials ever put into a game is the first screen of level 1-1 of Super Mario Bros for the NES.  When you press the control pad, you move.  You can't pass/defeat the Goomba unless you learn how to jump: Press A.  The first block is spaced in a way where you are likely to hit it and discover ? blocks have things in them.  If not, you'll probably bounce into the next few blocks when testing out the jump mechanic some more.  The next block contains a mushroom, and the row of blocks above makes it hard to dodge.  Once you run into it you learn that they make you grow, and when you are hit you realize it gives you an extra "chance" so to speak.  From there, you're free to explore the wider world.  A brand new player may not get the mechanics the first time and end up dying a couple times, but it's still designed so the player can't move forward unless they are comfortable with the fundamentals.

Thanks for that link SonofMrPeanut, that was a really interesting watch.
I mentioned in the review about the default controls feeling "backwards" and was going to expand on it but cut that segment for space as it was just personal preference;
I always found it easier to assign the controls to more of a Mario-style layout - B for jump, Y for shoot, A for Dash and X for Item Select (especially since the select or minus button is kind of awkward to reach on the GamePad). To each their own, really.

I've mapped speed-booster to the Lz button. That makes it much easier to shinespark, and to run and shoot/jump simultaneously.

Super Metroid is my game of forever. Every couple of months I get the urge to play it again, but I restrain myself for fear of becoming sick of it. Every couple of years though, I allow myself to do another run through. It's an exceptional game.

I found that video a little irritating. A lot of the stuff he comments on are interesting a probably true, but I can't help but get the feeling that there is a little too much bullshitty reading into things.

Protip: swap the start and select buttons so  it's fast access to changing to missiles on the Wii U.

This is very true. Also odd, considering games such as Ninja Gaiden dealt with wall jumping in more intuitive ways in the NES era. My guess is that it was supposed to be an advanced technique that the player only learned from seeing the friendly creatures do it (a brilliant "tutorial"). If you can easily wall jump from the beginning, you can short-cut a few areas and possibly get yourself into trouble.

I agree the video has some issues. If it did such a great job explaining how to play the game, we shouldn't have Miiverse posts asking how to open red doors, or "y can't metroid crawl".

That does make me think of an irk I've always had controlwise:  The Space Jump.  It handles like a tank in this game, and the've clearly refined it in future entries.

Actually I've always found the controls backwards as well so I always switched them to the setup Andrew has.  I've never really seen that mentioned in a review and, frankly, once I get into the game I never remember that I'm even using an alternate control scheme.

When I go back and play this or A Link to the Past, I really feel like the SNES was the sweet spot for game difficulty.  Go back to the NES Zeldas and Metroid and there is practically no indication whatsoever on what to do or where to go.  It is much more intuitive in the SNES entries but they don't hit you over the head every five seconds with the solution and treat you like an idiot.  Those games also require some real videogame skill and failure is a real threat, but not in the bullshit way NES games often had where it felt like the game was trying to screw you.  You don't want the game to feel unfair but it shouldn't treat you like an idiot either.  It's a difficult balance and the industry had it and lost it.

One of my favorite games in the series.  I do have to change the control scheme before starting, as the original setting feels awkward.  The atmosphere goes really well with this game, Can't wait to get the Wii U version and be an official part of the community* despite having the other versions of it.

I agree the video has some issues. If it did such a great job explaining how to play the game, we shouldn't have Miiverse posts asking how to open red doors, or "y can't metroid crawl".

Didn't watch the video, but would suggest that stupid posts (some of which are surely trolling) on Miiverse don't take anything away from the brilliance of this game and how it teaches you to play through brilliant design and level structure.

This will be the first time I beat this game.
Its OK.
That's all I'll give it.

Why not good?  Because I ended with 58% with being really carefully and checking everything.  I honestly don't see how you could do 90-100% without using a guide or playing through the game analyzing each inch.  The controls are well... Not as spot on as I would like.  Its a fun game but I'll probably never play it again.

Having also played Symphony of the Night (to completion, multiple endings) for the first time recently, that game doesn't hold up nearly as well as Super Metroid does. Both are classics for good reason... but in my opinion they aren't really in the same class.


FF7? A very large percentage of people wouldn't even consider that to be the best game in the series, and without nostalgia you'd be hard pressed to seriously consider it as "best in genre".  But that's just one opinion.