Legend of the River King

The use of the term "legend" in a game's title can mean a lot of things. It may mean you're in for a lengthy, fulfilling experience, or a complex, well-told story. Sometimes, it's indicative of something a little less extravagant. 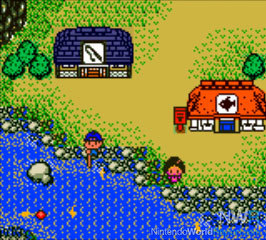 Legend of the River King, much like Harvest Moon, is predicated on the idea that, in the right wrapper, certain utilitarian, blue-collar tasks can come across as engaging activities. The difference is that farming in Harvest Moon is a collection of complementary chores that build to some greater accomplishment; fishing in River King is more a collection of nuisances that lead to greater ennui.

Though some of its systems take on the trappings of an RPG (items and inventory, shops, environments you explore on foot, etc.), River King finds a way to borrow only the worst, most disjointed parts of the genre for its already less than thrilling activity. Its plays at having an RPG's narrative arc and explorable world are largely based on your ability to walk slowly around different areas and catch fish. Not surprisingly, there's not a ton of texture to doing those things. Aside from having this severely limited economy of play, River King's fishing mechanics are an exercise in monotony and disappointment. 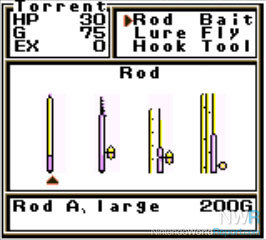 Though somewhat interactive and engaging when you manage to get a fish on the hook, it's absolutely never worth the effort and frustration it takes to get there. The actual process of fishing in River King has all the fun of backing out to reposition yourself, watching your lure go untouched, having hooks and bait snatched by fleeing fish, walking to a shop to buy more hooks and more bait, and repeating, without any of the parts where you don't have to fish.

The two halves of River King don't complement each other at all. Its halfhearted combination of RPG systems and fishing only makes it a doddering, tepid experience in both regards.