99Moves is the third 99-themed retro game from EnjoyUp Games (the others being 99Bullets and 99Seconds). Each game in this series is structured around a central limitation. In 99Moves, the limitation is of the number of directional changes, or moves, you can make with an avatar that travels at a set speed around a two-dimensional obstacle course. Given the title and series theme, it seems the developers intended the player to focus on moving efficiently around each obstacle course. An omnipresent counter (starting at 99, naturally) serves to highlight this tension on the touch screen, counting down to zero as you redirect your avatar. 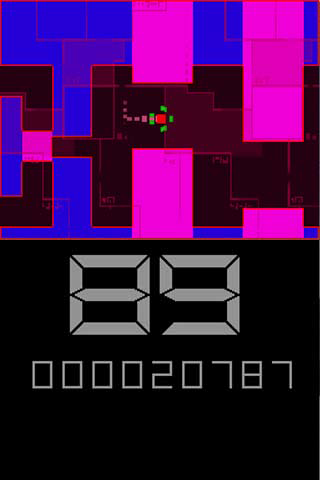 99Moves has 12 levels, with all but the first locked when you begin the game. You unlock each successive stage by completing the previous, which entails dodging obstacles and reaching an exit portal. Upon reaching the exit, unused moves are converted to points and added to your score. You can also score points by either flying close to walls and moving obstacles or collecting tokens. If you run into something, you gain a split second of invincibility and the color palette changes; a second hit kills you. You can, however, regain your health by collecting a token. The levels alternate between linear courses, where the objective is to simply move from point A to point B, and arenas, where you must stay alive until the exit portal appears. The latter can feel a bit random, but repeated testing suggests otherwise. Thus, for each level in 99Moves, it is probably possible to map out an optimal path to achieve a theoretical maximum score. I am not sure why anyone would want to do that, but if you want to go all Billy Mitchell, have at it.

Any good obstacle dodging game needs tight controls, so I enjoyed the snappiness of 99Moves. Without any accompanying delay or acceleration to your directional changes, the fast action taxes your reflexes and sense of timing. 99Moves reminded me a bit of Snake in this way. Moreover, there are only two speeds for your avatar, and you can only switch between them by hitting certain obstacles. This means you control your timing by picking your path, forcing you to think carefully about when and where you make your moves. Unfortunately, the level design is such that movement efficiency is of your least concern. The challenge of this game is entirely of the twitch and memorize variety. My deaths came from poor timing, bad reflexes, or forgetting a necessary path. I almost never found myself running low on available moves. In this way, 99Moves fails to live up to its central premise, and that is a shame. 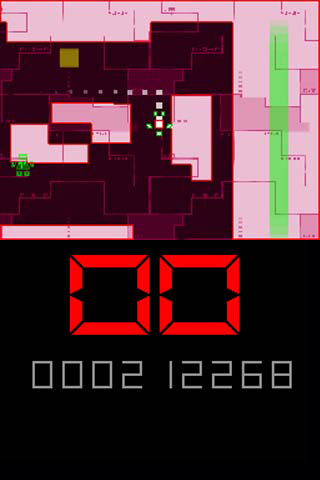 So movement efficiency isn’t necessary to complete a level, but because unused moves contribute to your score, you might want to save them anyway. However, the scores that pre-populate the high score tables are comically low. I was awarded the high score by a large margin every time I completed a stage; I think placing less than first would actually be more of a challenge. Considering score is all that matters in this game, and that I was able to complete all 12 levels in only a couple of hours, I don’t see much replay value here.

Finally, although I enjoyed the simple, responsive controls, I found myself wishing the aesthetic had gone further in a presenting a retro style. The synth soundtrack was mostly forgettable and the graphics didn’t evoke feelings of nostalgia; they were simple and plain. This blandness cemented my disappointment with the other problems I’ve highlighted. Some players may enjoy 99Moves on its concept alone; everyone else should set their expectations realistically.