For me, one of the great joys of this hobby is discovering great games by going in cold. I knew nothing about Shovel Knight when I was assigned the review and it turned out to be one of my favorite games of that generation. Similarly, I volunteered for Horizon Chase Turbo because it looked a little like Out Run, and it became perhaps my favorite single-player racing game. Right around Halloween, I was assigned Ghost Song, a 2013 Kickstarter game I’d never heard of, and immediately fell in love with it. Clearly inspired by Super Metroid and the Souls series, it also has links to Hollow Knight, another game I knew nothing about but wound up loving.

You play as a mysterious armor-wearing figure called “Deadsuit” who wakes up on a strange planet and quickly finds themselves helping a group of humans who crash-landed. Deadsuit isn’t even sure whether it’s a robot, human, or spaceship but doesn’t seem all that interested in finding out. It must travel to five spots on the planet and find replacement parts for the humans’ ship, the Gambler, and in doing so, must brave the dangerous creatures and subterranean environments in the world. 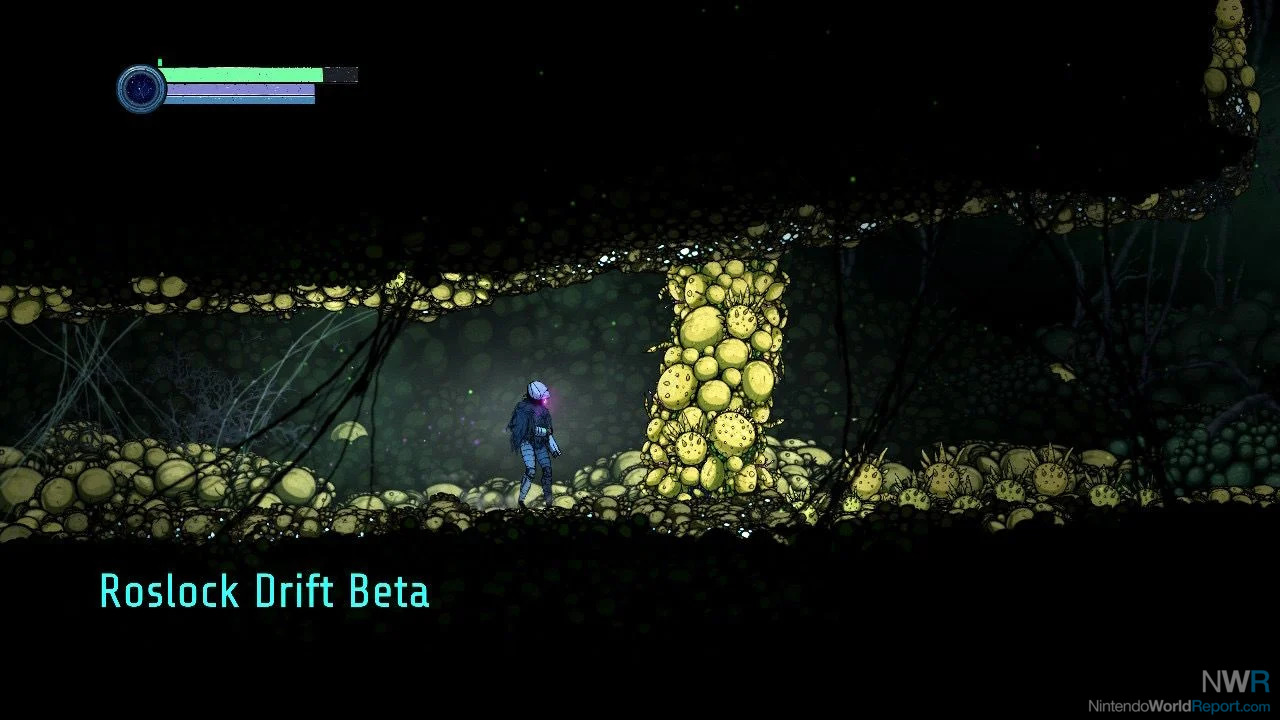 The game’s map is the clearest homage to Super Metroid, with color-coded sectors and lots of breakable walls. You will occasionally come across large, dead robots which will serve as fast-travel points and upgrade stations–more on that in a minute. Save points, while not rare, are less common than I’d like, and death often requires some amount of re-traversal. Deadsuit’s arm cannon is similar to Samus Aran’s with a twist: the cannon will eventually overheat, making shots weaker. However, this is where Deadsuit’s secondary attack–a melee attack–comes in handy. An overheated arm cannon means a fully-powered melee weapon, so players are encouraged to change up their combat frequently. The more Deadsuit explores the more melee weapons it will discover, like a spear or a gigantic short-range punch. My favorite–the “Painwheel,” is a boomeranging spiked shield that does a ton of damage fully-charged.

In addition to melee weapons, Deadsuit will also come across various arm cannon subweapons (like a missile or charge shot) that are fun to experiment with. You’ll also find Modules, which function a lot like the Charms in Hollow Knight. Each subweapon and Module takes a certain amount of energy to equip, and Deadsuit’s energy pool is tied to its level, so you’re also encouraged to find a combo that suits your playstyle. I eventually started forgoing multiple subweapons for more Modules. Defeated enemies will drop “NanoGel,” which is Ghost Song’s currency. NanoGel can be used to buy items from the Gambler’s trading post (or another, hard-to-find shop) but its primary purpose is to level up Deadsuit at fast-travel points. You can increase three traits which will affect Deadsuit’s base stats, including HP, attack power, stamina, available energy, etc. The trick is that the cost goes up with every level.

As with so many games these days, Ghost Song incorporates aspects of the Souls series into its design. Combat is difficult and demands precision–most enemies hit hard and my first few hours with the game were spent tenuously observing every new creature I came across. You’ll find healing items that can be activated at any time and are refilled at save points, and you’d better get used to using them. Dying, of course, results in you dropping a chunk of your NanoGel (how much depends on the difficulty setting), whereupon you must hike back to retrieve it, hoping not to die en route. Unfortunately, there is no “bank,” as in Hollow Knight, where you can save up a large store of NanoGel in case you hit a particularly rough choke point.

The bosses, of course, are where the real challenges lie. Several are optional but will usually net you a nifty subweapon or Module for the trouble. The bosses who guard replacement parts for the Gambler, though, are tough customers and often come down to good old wars of attrition–you’ll be avoiding their attacks more often than actually attacking, which does get old, but that’s how Hollow Knight was as well. Playing with your loadout certainly helps but there are no fights–boss or otherwise–where you can brute-force it. Patience is the name of the game here. 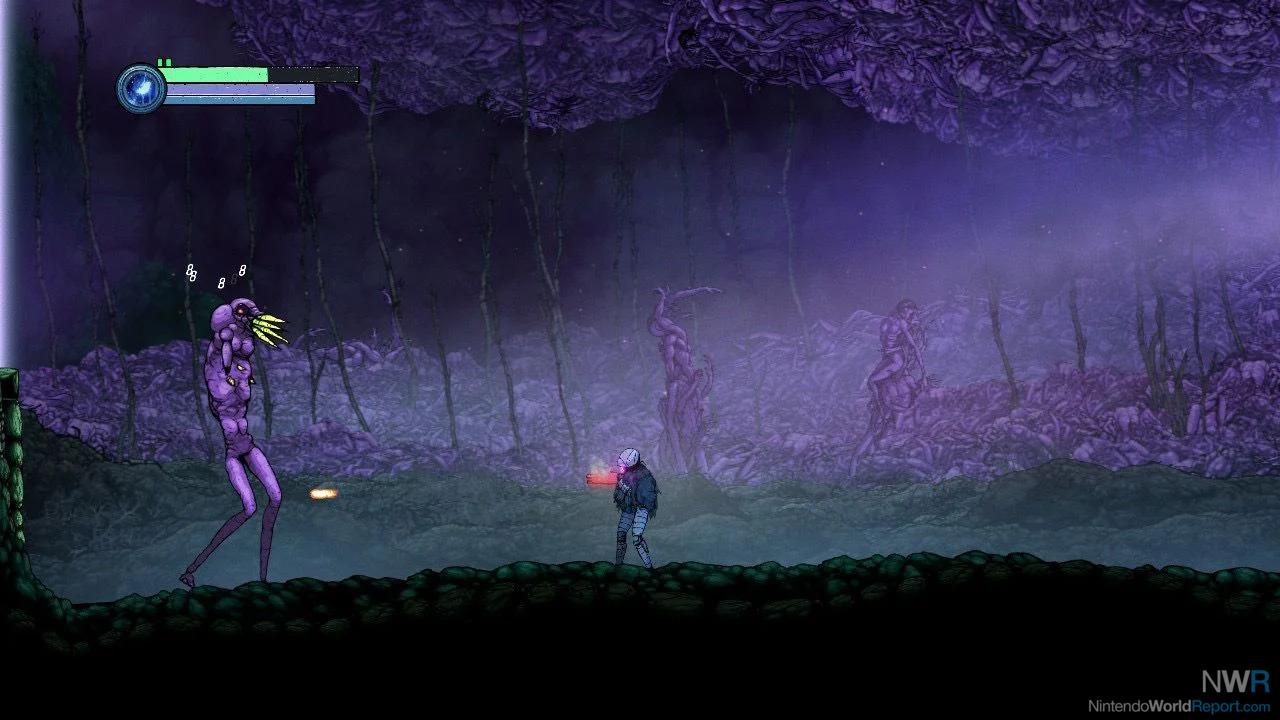 The world itself is gorgeous if somewhat undercooked. To be clear, every frame of Ghost Song is unbelievably gorgeous, and the environments themselves are often completely alien. Creature noises echo in the caverns, Deadsuit’s legs become covered in slime or fluids as she runs over messy terrain, darkness gives way to surprising touches of color. This planet feels more alive than most video game locations. I especially liked the few outdoor areas and the oppressive machine city of the Junk Pit. Other areas, though, feel a bit empty, lacking purpose other than being a road to a particular destination. There is a small underwater section that winds up being a peaceful but weird tangent that’s over too quickly and doesn’t connect to anything else. The game’s music is mostly atmospheric or ambient, but the few musical themes are serene and low-key. I enjoyed them, but if you’re looking for the kinds of tunes you’d hear in other platformers, you won’t find them here.

Deadsuit will come across various human (and android) characters, mostly associated with the Gambler, who will engage in conversation. I always enjoyed these interactions–some of them trigger events elsewhere–and the impressive writing gave each character a solid personality. All are struggling with questions of identity and purpose, and while Deadsuit is probably the perfect reflection of those yearnings, their talks always left me a bit cold towards Deadsuit itself. It is, for all intents and purposes, a “silent protagonist” who occasionally responds, but just as often answers with an ellipsis.

Occasionally-frustrating difficulty aside, there are a few things I disliked about Ghost Song. First, in order to swap out your subweapons and Modules, you must hold down on the D-pad to turn Deadsuit “off.” After that, you can go into the submenu and swap equipment around. The problem here is that, during this time, the game doesn’t actually pause, so you can’t do this during a normal fight, much less a boss fight. I know that not being able to pause your game is a Souls thing, but it’s not one I welcome (you can press the + button to actually pause, but it’s a different screen), especially since it means that you basically have to die during a boss fight if you discover your equipment isn't cutting it, then rejigger upon respawning.

Platforming on very small chunks of ground is weirdly difficult, and Deadsuit will often slide off the side, as if these tiny ledges are rounded. From a technical perspective, the frame rate will occasionally chug while simply running around, although this never affected combat encounters (in my experience, anyway). A patch just came out which supposedly locked the framerate at 30, but I still experienced drops. When moving between color-coded sectors of the map, the load times can be noticeably long compared to moving between screens within a given sector.

Despite these misgivings, I found myself blowing through Ghost Song with the enthusiasm I normally reserve for new Shantae games. There have been frustrating boss fights, sure, but that was my experience with Hollow Knight too, and it’s a similar feeling here. Finally beating these tough-as-nails bosses gives you a great feeling of accomplishment (and relief), although they’re probably not for everybody. It’s definitely worth a shot if you enjoy Metroid, Hollow Knight, or the Souls series.