Who's up for getting married to the mob - again?

Among the parade of love Aksys dropped in 2020 was Piofiore: Fated Memories, which was set in mid-1920s Italy and featured a protagonist who was caught in a four-way war between the church and three different Mafia families. As often happens with popular novels, a follow-up has come out in North America - however, Episodio 1926 takes a different approach by creating a second full set of stories rather than brief vignettes as has been seen in other sequels. It’s a neat concept, which mostly pays off but does have some issues that may drive the reader batty.

There are six stories unlocked from the start of Episodio 1926, all of which are based on the best endings of the original five suitors from Fated Memories and its “golden route”. For the most part, the game does a good job of explaining the characters for those coming in new (or who haven’t played the original in a couple of years). Though I did roll my eyes a bit when someone who was clearly killed in the original was transferred to a better hospital and had their condition upgraded to “alive” to come back. The largest route, “Alternitivia”, involves substories with all of the OG suitors and will likely be where most of the time will be spent; I could get through a main suitor route in three or four hours going for the best ending. 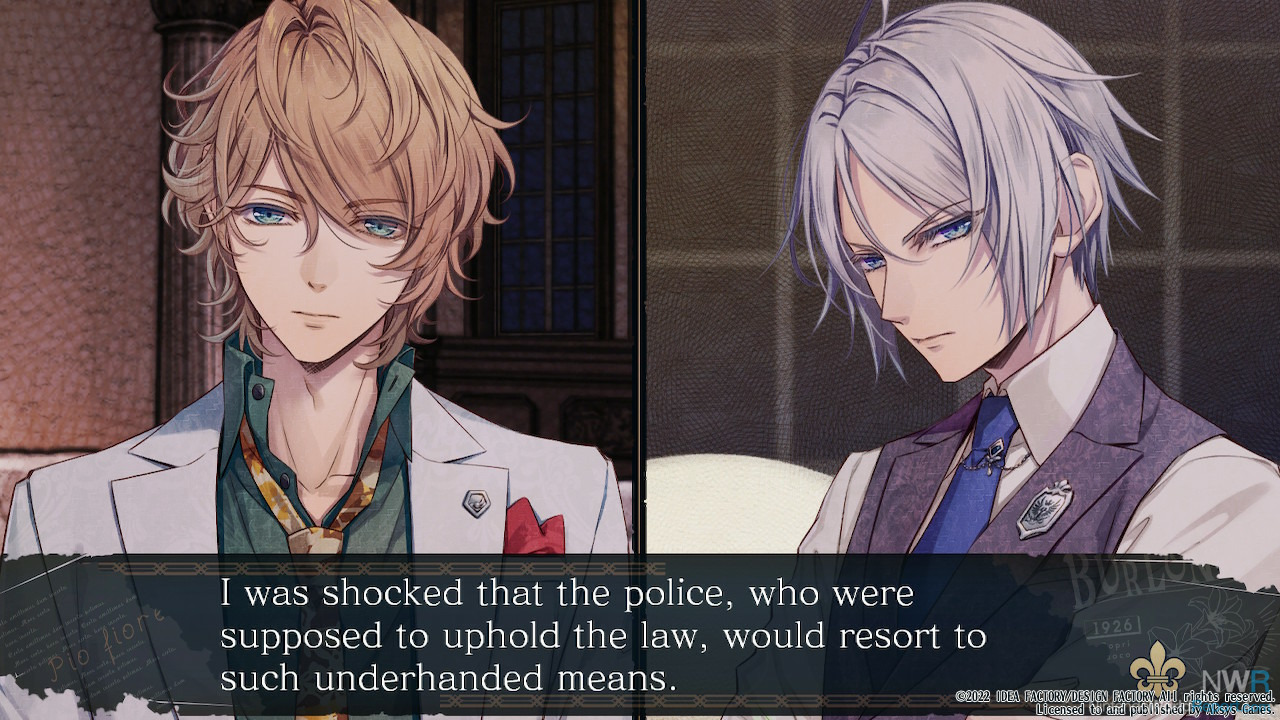 And thus the protagonist learns that tutti i poliziotti sono bastardi.

The advantage of picking up from an existing work is that it allows for avoidance of the “is this… love?” trope. In her 1926 form, the heroine (default name Liliana) is resolute in what she wants, and the loving couple of the route is instead focused on external conflict (the church, local government, the fascist Mussolini government which hit a little close to home in light of recent events in Italy). For a game in the 1920s, it’s a good subversion that the male suitors generally don’t make the first moves in the relationship.

Fundamentally, any game centered around the mob is going to cop an M rating for violence if nothing else. However, several of the bad endings feature scenes of rape of the protagonist as well as suicides both on and off-screen, and one of the best endings (from my former “Best Babyface”, no less) also does feature an on-screen sexual assault that left me a bit uncomfortable.

One of the major features of the sequel is also cause of a major issue with text handling; during the suitor stories, an “Aria” scene will be offered that serves as a flashback; these scenes are presented in grayscale with a heavy focus on white, but the text is also white and doesn’t have any form of colored stroke behind it to make it more legible. This made me have to almost cross my eyes in order to read the full text, especially since the log would routinely place these scenes under “Monologue”. The editors also seemed to have some off moments, as there was more than one instance of entire sentence fragments being swapped around or text being too long for the three-line text box it was intended to be added to.

A lot of the backgrounds will be familiar to those who played Fated Memories, though that’s to be expected when the two story sets are only separated by a year. There’s more of a variety in backgrounds as well, as the 1926 stories fundamentally feature a more international story (portions of the story are set in France, the United States, and Asia as well as more frequent trips to Rome from the smaller Italian city of Burlone). The soundtrack isn’t all that distracting, using a lot of Italian folk tunes that might be familiar from other mafia style stories.

It was interesting to read through Episodio 1926 to see what happened to the characters and how they would deal with the fascist threat that was only growing in Italy. The text issues (especially in necessary scenes for best endings) were a bit annoying, and if you’re not going for 100% completion it’s possible to run the story through as a long weekend read.