A level-based 3D platformer with lots to collect and the requisite amount of jank.

Frogun belongs to the class of 3D platformers where you explore a single, bite-sized level filled with jumps, moving platforms, enemies, coins, and lots more. And then you move on to the next and do it all again. With dozens of levels to play through, some of which feature boss fights or races, and full completion attached to things like finishing under a certain time or without dying, Frogun offers much more than it might initially seem.

The story revolves around a budding young explorer named Renata who sets out after her parents who fail to return from an expedition. Along the way, she encounters a man named Jake who insists that Renata is after some great treasure, a fellow who sells all manner of cosmetic hats for coins, and bosses like a giant spider. One of the collectables in every stage is a set of notes that shed some light on the research of Renata's parents, too, but the real draw of Frogun is the titular tool and all the things to shoot for throughout the game. 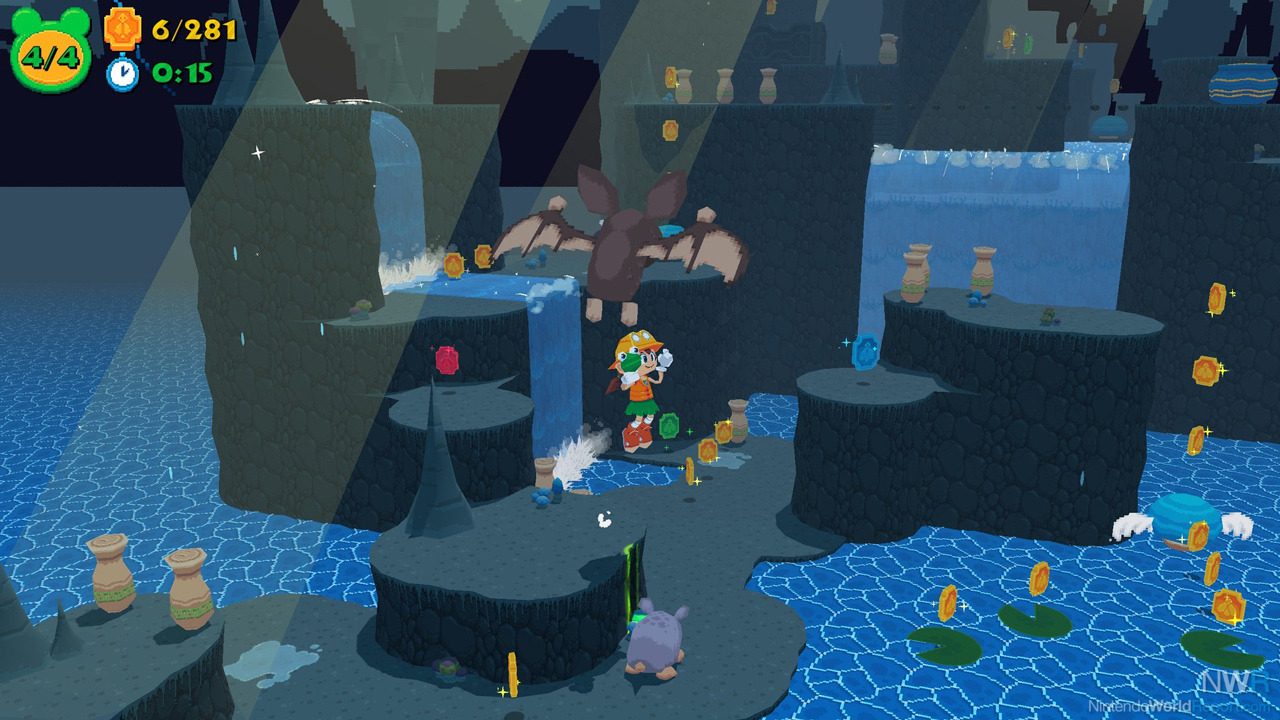 The levels are generally grouped by theme, such as winter, lava, and cavern. These worlds consist of about a half dozen stages, including a race and a boss fight to close out the world. If you've gathered enough in-game collectibles, like green "eyemeralds," or finished enough stages under the recommended time limit, you can spend these achievements to increase your health meter by a single point. Given that the difficulty curve is pretty steady, it's definitely worth bolstering your hit points as you go.

A given stage will feature a plethora of objects to collect, with each tied to a specific completion metric for that stage. Picking up all of coins, notes, and eyemeralds takes some real skill, especially when dying resets you back to the beginning of the stage or your most recent checkpoint. And don't expect to find many of these; if aiming to fully complete a level 100 percent, it's almost certainly going to take multiple attempts. You'll need to figure out the fastest route, navigate to the end without taking a death, and also discover any hidden coins and secret areas. I actually enjoyed Frogun the most when I was trying to complete every level as fast as possible. Many stages can be completed in under a few minutes. Snagging every last coin takes quite a bit of skill and patience, even though no stage is all that large. Aside from the linear path through each world, how you play through the game is largely up to you. 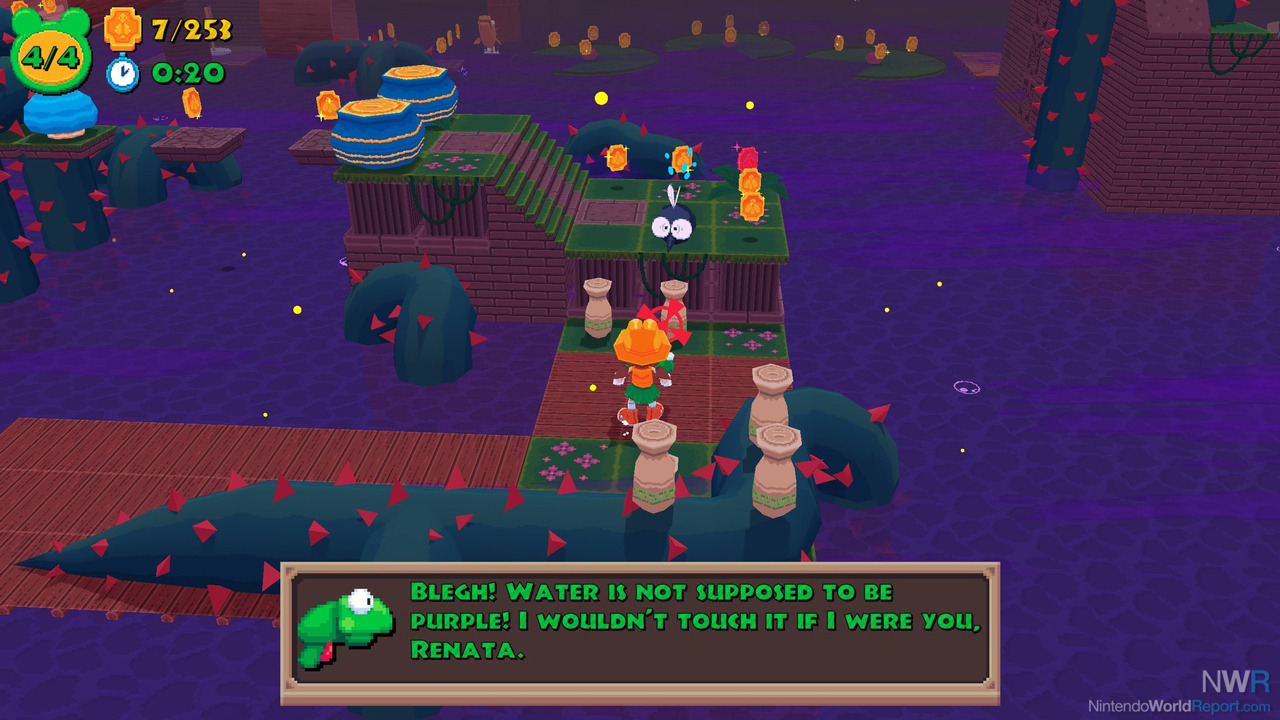 In addition to the Frogun actually talking during cutscenes and offering tips during gameplay, it also functions like a grappling hook. When Renata needs to cross a gap she can't jump across, you can press a single button to shoot out the Frogun's long red tongue. Upon striking a wall or a trampoline, you'll be instantly pulled in that direction. You can also use the Frogun to pick up jars and small enemies to launch at larger ones or certain obstacles. While standing still, it's possible to hold down a button and aim the gun's reticle so as to make a more precise shot.

Even though the controls are solid most of the time, there's still some jank and stickiness that can lead to some unfortunate deaths. These issues are compounded in some levels by noticeable slowdown, especially when more enemies and obstacles are on screen. Fortunately, the camera controls are fairly reliable, and the minute-to-minute moving and jumping feel good. The simplicity of the visuals does an admirable job of recalling the past while also making it easy to see everything Renata can pick up and everywhere she can explore.

The Switch certainly doesn't have an overabundance of 3D platforming games, let alone those that consist of multiple small levels as opposed to larger, more open spaces, like Super Mario 64 and Banjo Kazooie. Ultimately, Renata and her Frog-shaped gun make for a goofy but capable pair, and I ended up being surprised by how much I liked their adventure and how it kept pushing me to finish just one more stage. You can unlock a two-player duel mode, but there's more than enough reason to return to every level solo to perfect your performance. I agree that what the world needs now is love, but a little Frogun wouldn't hurt either.