Protect fox cubs at all costs!

From the title alone, you can tell that you aren’t in for a happy-go-lucky, cheerful time with Endling - Extinction is Forever. It opens in the midst of a pretty serious situation: a forest fire. From the start, the tone is set and that tone is truly emotional, and pretty difficult to experience at times, layered with a bunch of social commentary on real-world environmental issues.

You take on the role of a mother fox, who is the last of her kind, doing her best to survive in an environment that has been torn apart and destroyed by humans. On top of this, you have a skulk of foxes that rely on you to feed them, protect them, and raise them. There is clear message espoused by Endling, highlighting how humanity is destroying and polluting natural environments, and the impacts that this has on wildlife and nature. None of what occurs or happens to the mother fox or the cubs feels forced into the game’s narrative, which only enhances the heartbreaking moments that do happen in real life. 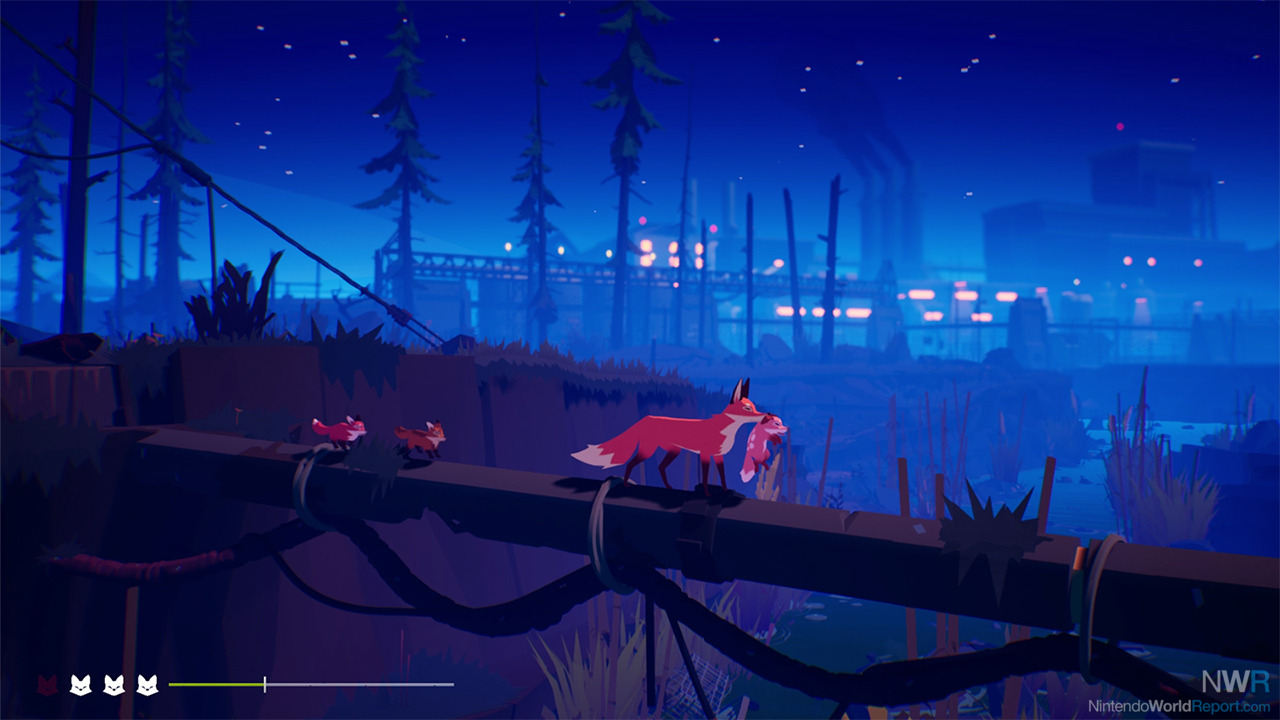 Survival is key to Endling. The game plays out one night at a time, with you leaving your base to hunt, scavenge for food, and ultimately survive. Throughout these sessions, you’ll encounter a variety of contraptions and traps, such as bear traps used to catch and hurt you. At times, other wild animals will target you and your cubs. Endling portrays a truly sad existence, where everything seems to be out to get you. It’s made clear early on that you must return to your base before nightfall ends, as you and your cubs need both food and rest to continue to the next day.

Hunting for food and feeding your cubs is vital to their survival. If you don’t sniff out food, which can be executed with the L button, your cubs and yourself will be at risk of starvation. On-screen, you have a meter and indicator on the number of cubs you have left (how morbid!), and this depletes the longer you take to forage for food. What’s more, you have the opportunity to customise how your cubs look at the beginning, and I spent way too much time giving them matching patches on their forehead, only to spend the next however many hours fighting to keep them alive by fending off badgers, evading death traps, chasing mice, and pouncing for fish!

Developer Herobeat Studios has managed to build an incredibly simple story that carries so much emotional weight, through a dialogue-free narrative and expert sound design. What is especially heartbreaking is the whimpers and howls of your cubs when danger arises or during harrowing cutscenes. For some, these scenes may be difficult to sit through. But as touched on earlier, everything that occurs is something that is very real and very likely a part of the animal kingdom. The music used in Endling is incredibly impactful, too. For the most part, it is low-key and minimal; however, when the devs want to really tug on your heartstrings, they use their own strings to convey sadness, loss, and desperation. 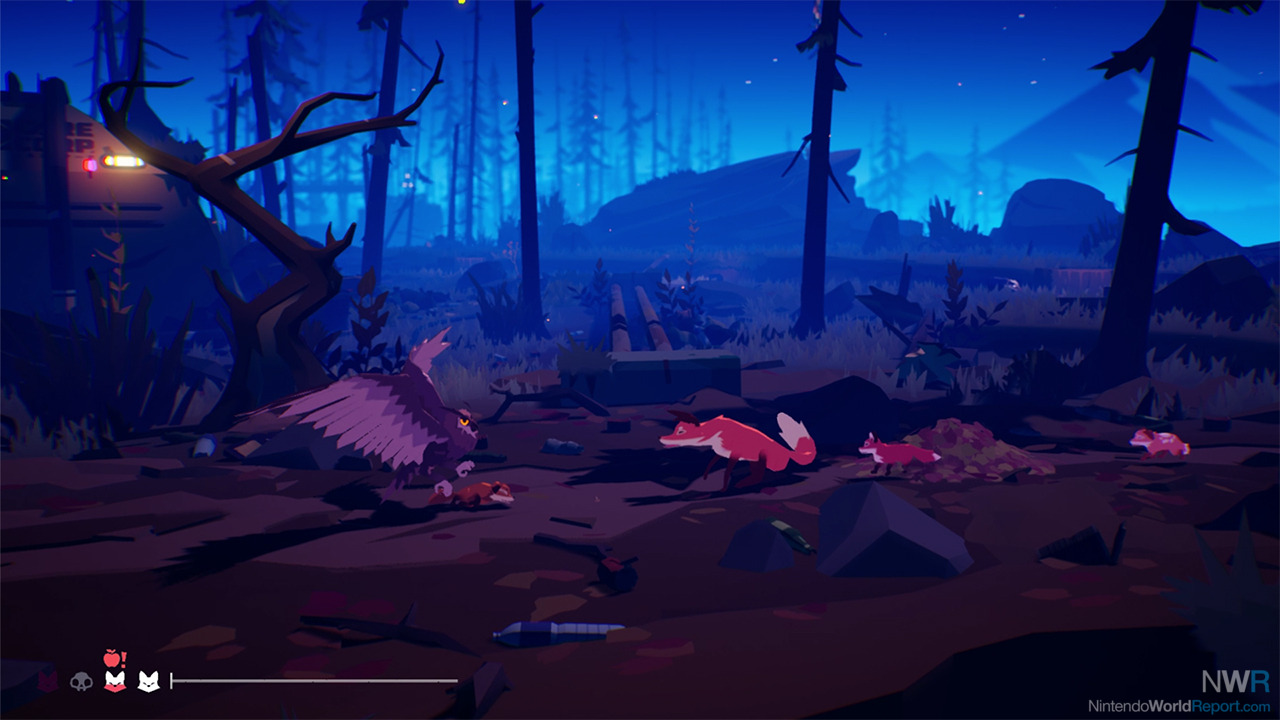 Whilst the life of a mother fox fighting for survival is challenging, as the player, it can be at times repetitive and a little mundane. When peak parts of the narrative aren’t at play, the evenings where you are simply scavenging can become pretty dull and unvaried. Yes, there will be traps and hazards to fend off that you need to be wary off—no sprinting around the woods, or it’s game over for one of your legs—I wish the environment would change up a little more. That said, I can understand the realism of having a nest/base and rinse and repeating a very similar cycle to survive; such as the animal way of life. I guess there is beauty in the monotonous at times, but as a video game, seeing the same forest paths, under the same moonlight and blanket of snow, each day, can lessen the experience.

The art style and direction in Endling - Extinction is Forever is easily one of the high points. It is incredibly simple and clean and captures a playfulness that contrasts well against the game’s tone. This contrast is highly effective when those emotionally hard-hitting moments occur, whereas, on the other end of the scale, there are some very cute moments that are only enhanced by the visuals. The way in which you can interact with your cubs and the way they interact with one another is adorable and feels genuine, which makes those times when they are suffering and whimpering so much more cutting and hard to watch. The mixture of the aforementioned sound design and the simple, yet masterful visuals amplifies the emotions at play. 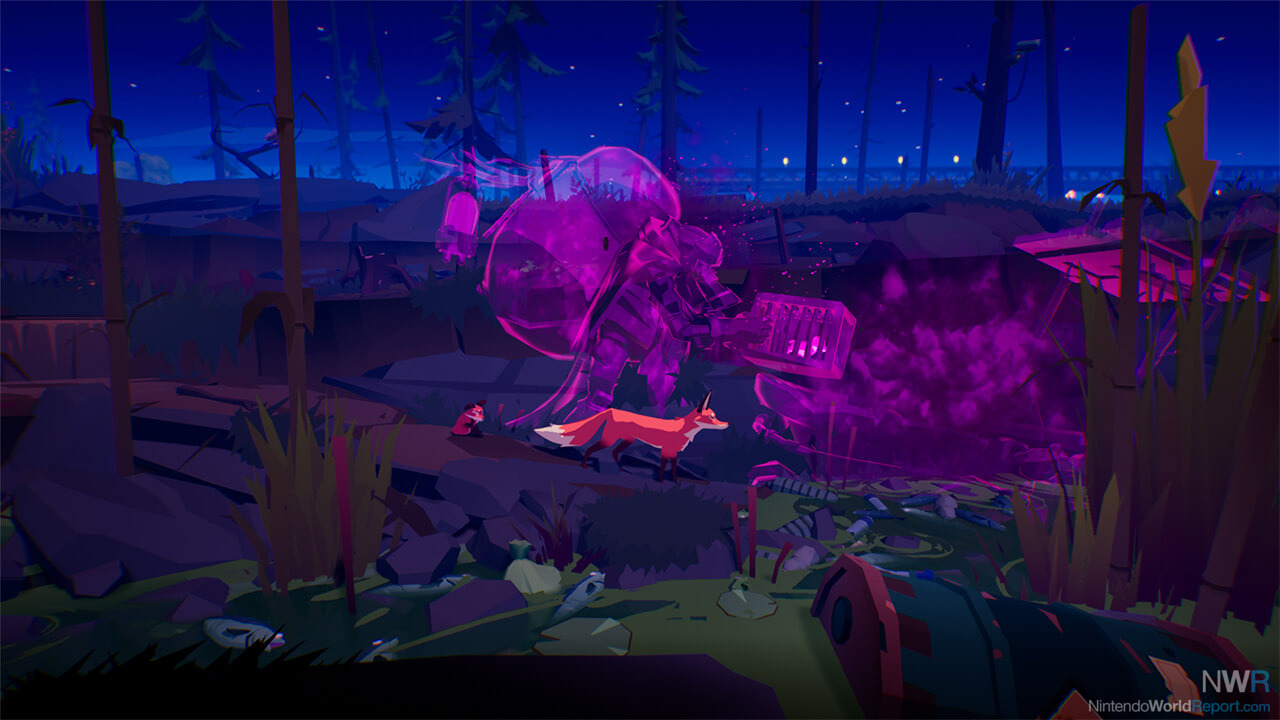 Endling - Extinction is Forever tells a sad story that is guaranteed to suck you in and trigger any maternal/paternal instincts you may have. Herobeat Studios has done a great job conveying an environmentally conscious story through the eyes of the lives affected most, and seriously delivers a brutally honest view of how humankind is harming the environment and natural ecosystem. Despite the repetitive nature of the gameplay, Endling is a powerful tale with a lasting, dare I say “forever,” effect.