Atelier Sophie 2: The Alchemist of the Mysterious Dream (Switch) Review

The Warm Soup Belly of JRPG’s

A lot of JRPGs are generally known as daunting games with impenetrable systems, padded-out length, and harsh difficulties. One outlier from those tropes has always been the Atelier series. They generally stick with similar systems and stories delivered at a more relaxed pace. This often means less tension overall, with more focus on crafting and gathering that pumps the endorphin hits to ultimately lull you into a coma.

The newest addition to the series, Atelier Sophie 2: The Alchemists of the Mysterious Dream, proves no different than its predecessors. You play as Sophie, a budding alchemist who is able to craft practically anything under the sun in her Atelier (a magic cauldron). It’s an anime style game so the art is beautiful, if a little fan service-y, and the world is colorful and filled with wonderfully voice-acted characters. 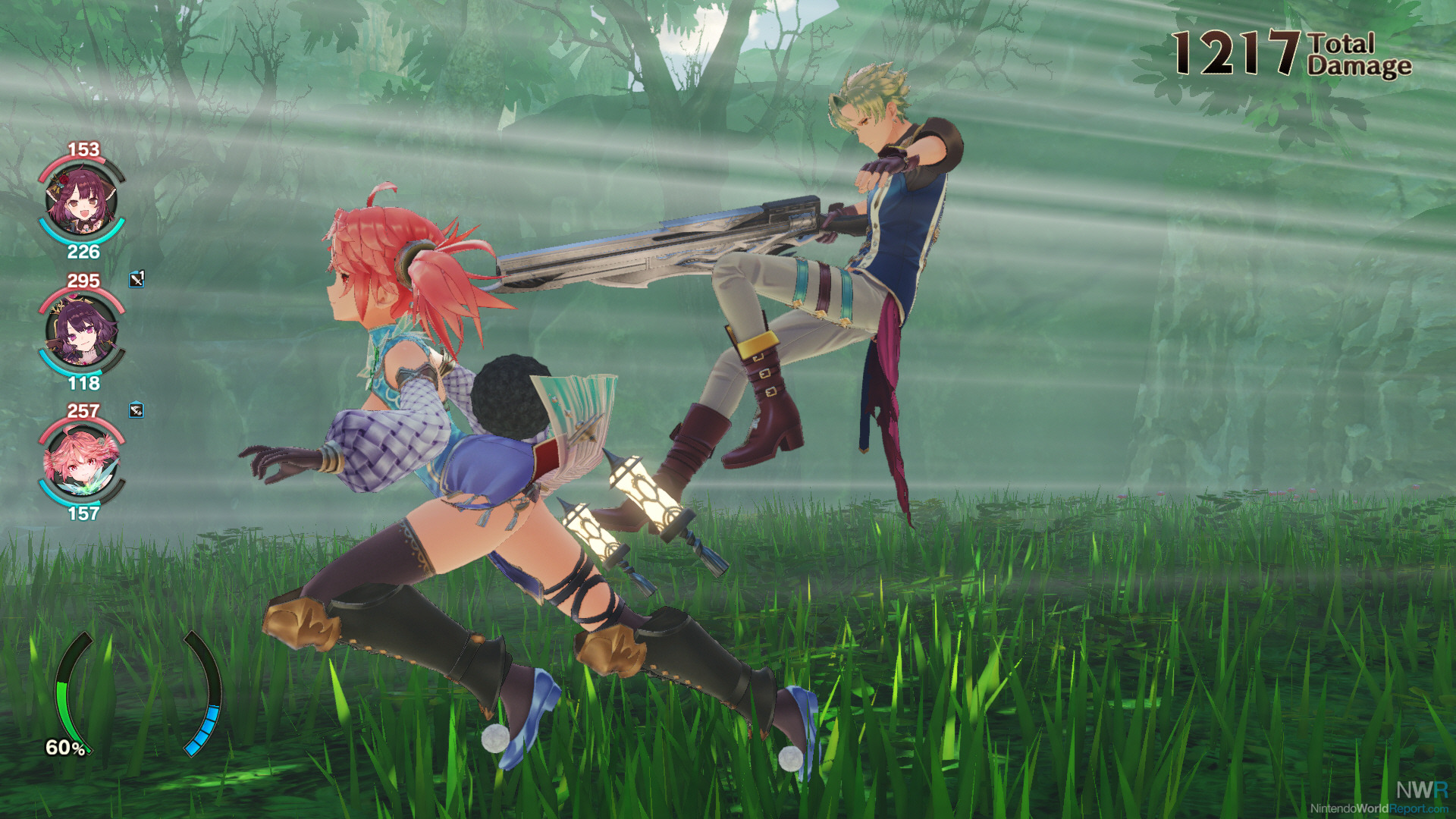 The gameplay loop is best compared to a warm blanket on a chilly day. You are given reasons to explore medium-sized maps and collect all the resources that can fit into your basket. Rocks? Sure! Flowers? Definitely! If it’s not tied down, you need to grab it because it will surely come in handy later for crafting in the Atelier. The inventory is finite but not annoyingly so, and the fast travel system is implemented from the start, so heading back to unload is a breeze.

You also gather resources from defeating monsters in turn-based combat. One of the key new features is how seamless the battles are. You initiate them by running into a monster or attacking it with your weapon, then with a quick camera adjustment you enter combat. It’s very fluid and a welcome addition I’d love to see in more JRPGs. During the battles, you have attacks, special abilities, items, and combination team up moves, which are flashy double attacks from two team members with minimal mana cost that unlock throughout the story. Another carry over from previous games in the series is the ability for a team member to step in to defend when someone is getting attacked. It uses up that team members turn but lowers the damage taken which can be a savior in some of the harder fights. 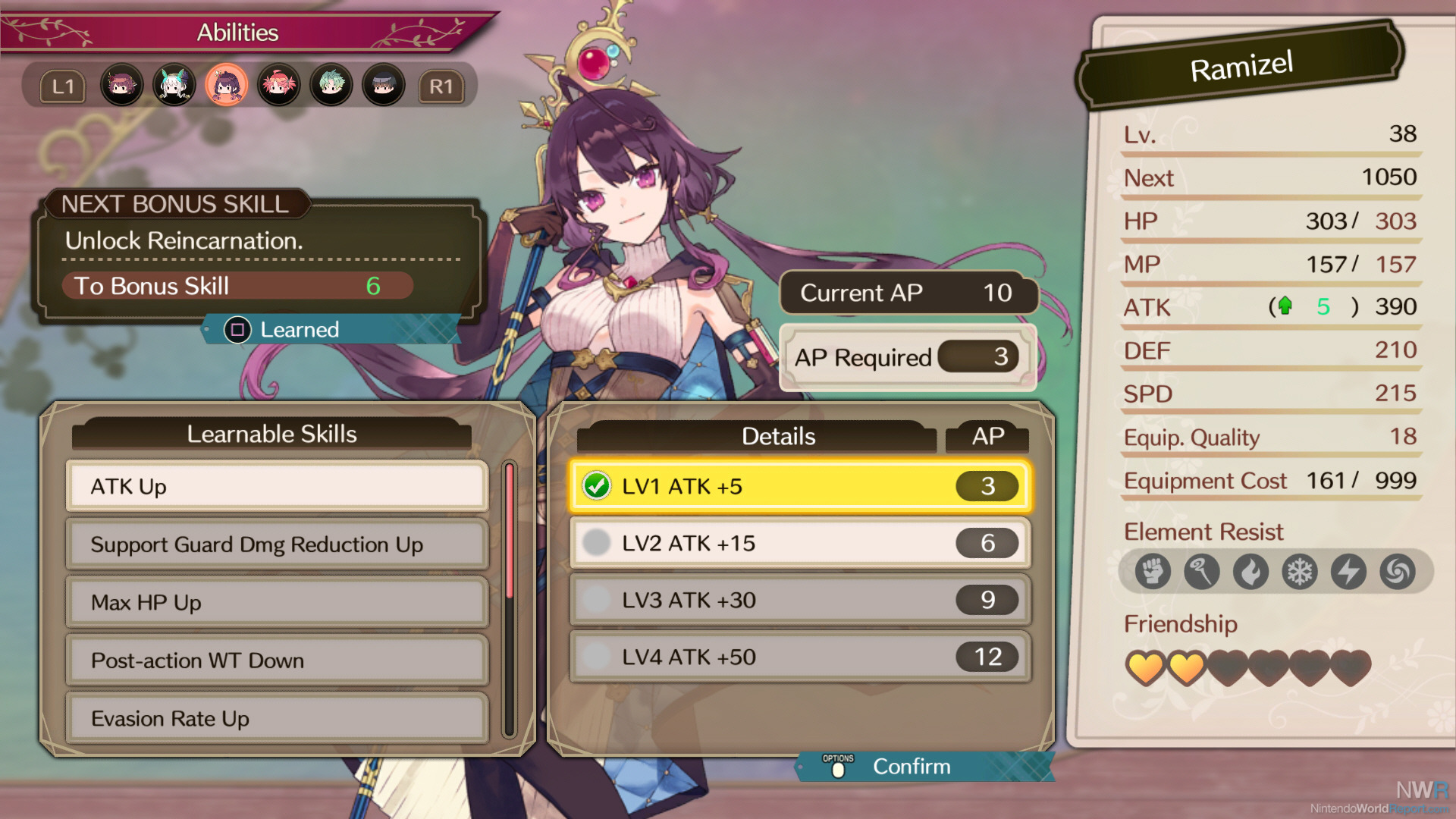 Despite the presence of these battles, they aren’t random and are commonly avoidable, which is a nice change of pace because when you do fight monsters it’s generally for a purpose, like gathering a specific resource or finishing a quest. Speaking of the quest system, there is a job hub where you can grab up to 10 quests at a time to knock out at your leisure. I really do mean at your leisure because pretty quickly the game kind of opens up. The quests usually involve either collecting a resource, crafting an item, or fighting a few monsters. Take what you want and just enjoy whatever you want. That’s what makes Atelier Sophie 2 a nice, easy experience.

Even as far as the story, the intro takes about an hour to get through, but once you start it's all aboard the mellow train. The story progresses via quests but are treated with the urgency of any other job. Do them however you want: progress the story or just relax and gather materials out in the world. Hell, half the story beats are just going to a point and having a pleasant conversation. These parts are used as character building with relationship meters that fill for extra story or even bonus combo moves in battle. The point is, the game doesn’t push you through anything. Nothing feels imperative, but within this atmosphere it’s absolutely welcoming. 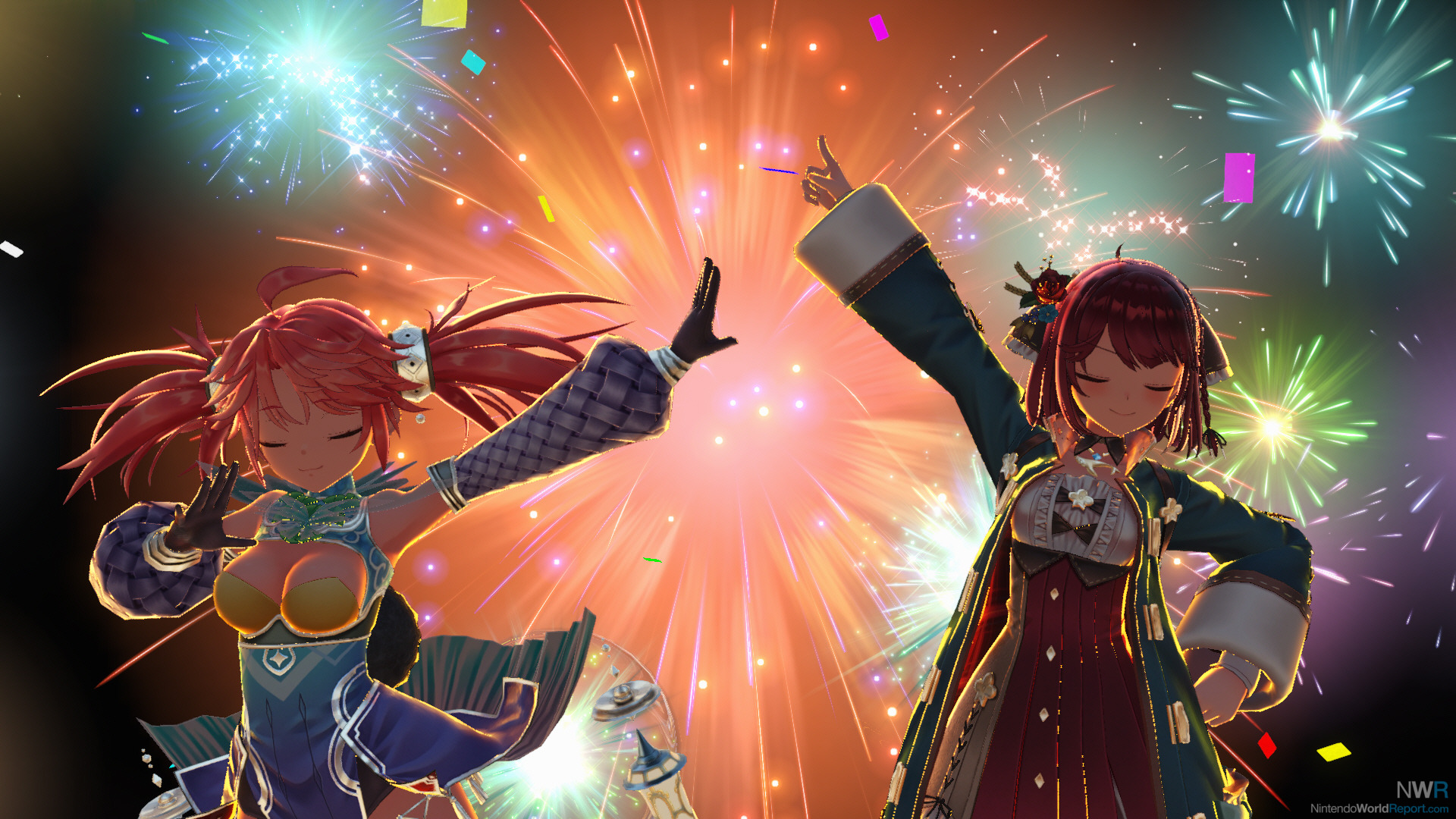 Once you have the right resources, alchemy is the next step in the process of the Atelier games. In this newest episode of the Sophie story, alchemy is performed via a grid board. Each item has a recipe with required resources. The resources vary in quality and have pseudo puzzle pieces that can be flipped to fit into the board. Once you have the resources, you can slot them onto the board in the best fit to create your item. There’s a lot to consider when it comes to slotting in the items. Items have an affinity that can be boosted by the resource puzzle pieces. For instance, a new pair of boots could be boosted with some electric puzzle pieces; luckily the grass resources I selected have two electric puzzle pieces. The goal isn’t to fill the board (though doing so will increase the quality of the item) but to slot everything in. There are elemental tiles on the board as well that can boost the puzzle pieces as well as connector pieces that enhance related elements, in addition to even more features. Once your resources are slotted in, the numbers tally and you have your item. You could focus as hard as you want on it or just shove the pieces in and get what you need.

The story itself is the one possible hang up about Atelier Sophie 2. Picking up directly after the first game, Sophie is transported to a dream dimension where she experiences characters from the previous game but out of time. So the ensemble cast includes her partner Plachta and her grandmother Ramizel, but both are now from the past and similar in age to Sophie. Within this dream world, Sophie is tasked with finding her friend Plachta (at the proper age) and exploring the dream world of Erde Wiege to find out what brought her and Plachta there. It’s a good concept but feels like a side story that doesn’t do much to push the overall narrative of Sophie forward. 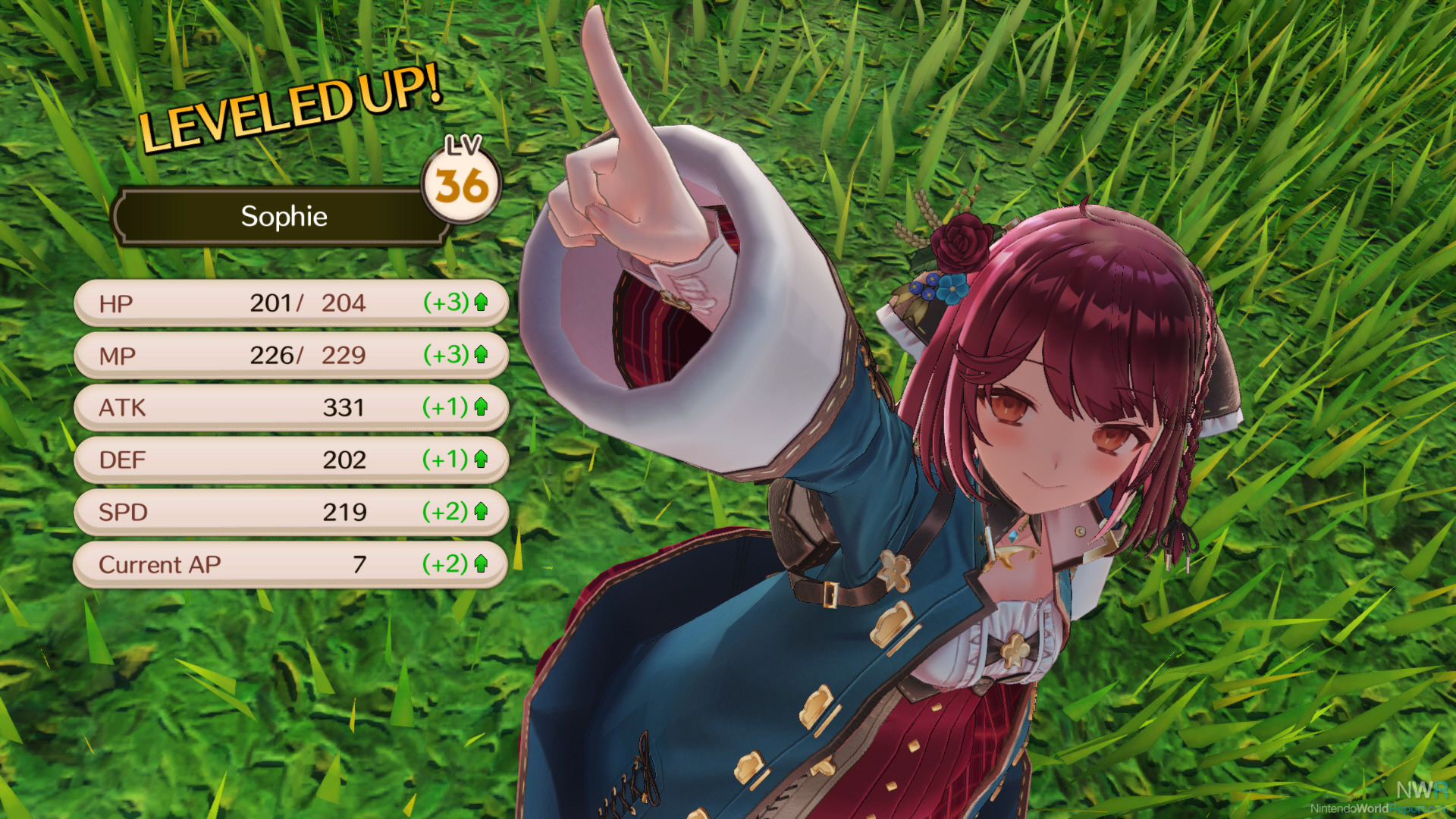 The tricky part about this story is the necessity of knowing and having an attachment to those characters from the previous game. There’s a handy recap video that explains the previous game but it still left me feeling detached and less interested in their relationships when I wasn’t there to experience them initially. This is a fine onboarding for new players as far as gameplay is concerned, but moments didn’t hit as hard for me as it would fans of the series. Still, I found the idea of coming to the story whenever I was ready a nice reprieve. When story beats were experienced they still also felt like a more relaxed experience with less emphasis on the drama. I don’t think every JRPG needs to end with you killing a god and neither does an Atelier game.

The Atelier series has been ongoing since the PlayStation 1 days, with different protagonists and ongoing story arcs. I am happy to report that Atelier Sophie 2: The Alchemists of the Mysterious Dream, proves that there’s still life in these games. The quality is there within the art, animations, and a lovingly charming soundtrack. Top to bottom this is a game worth checking out. The main issues come with it insisting on prior knowledge that can hamstring some of the emotional nuance. However if you’re coming for the comfy cozy gameplay? You’re in the right spot. Atelier Sophie 2 does not reinvent the wheel nor blow me away as far as RPGs go, but it did lull me into a peaceful, coma-like state of gratification. This game severely lacks intensity or high stakes and I think that’s kind of the point. It’s a warm bowl of soup when the weather outside is frightful.