This sure made me feel the Ultimate Despair.

Danganronpa: Trigger Happy Havoc is a cult classic game that gained notoriety in the West due to, of all things, an online let’s play that served as the first entry point to the series that English-speaking audiences had. It was officially released in English on PlayStation Vita three years later, and now finally makes its way to Nintendo systems for the first time on Switch. This is a game that I have a lot of complex feelings about playing for the first time in 2021, and unfortunately that’s only made worse by the fact that the Switch version has some pretty clear issues that betray one of the cheapest, laziest port jobs I’ve ever seen.

For those unfamiliar, Danganronpa is a murder mystery visual novel with a limited cast of recurring characters. It opens on the first day of school with freshman student Makoto Naegi preparing for his first day at Hope’s Peak Academy, an elite high school where every student is an “Ultimate”—someone who is the absolute best at a particular talent. As soon as he arrives, Makoto discovers that the school is not what it seems to be, and he and fourteen other Ultimate students have been trapped in a sadistic game run by a mechanical teddy bear named Monokuma.

Monokuma explains that they will be forced to spend the rest of their lives at Hope’s Peak, and he will only allow someone to escape if they murder a fellow student and get away with it. Of course once the murder occurs, the surviving students must fight back in a Class Trial where they try to determine the identity of the murderer—referred to as “the blackened.” If they successfully uncover the blackened, then the criminal will be executed. If they fail, then the blackened escapes and everyone else is executed instead.

Gameplay is split into three phases: school life, investigation, and the Class Trials. During school life, you’ll spend a lot of time watching main story cutscenes and hanging out with your favorite characters to get to know them better. Once a body has been discovered, the investigation phase begins as you examine the crime scene for evidence and scour the rest of the school to follow up on leads.

The Class Trials are Danganronpa’s bread and butter, and it’s here that the gameplay really shines and sets itself apart from other murder mystery games. Rather than a straightforward testimony where you can carefully cross-examine one character at a time, Class Trials are defined by the Non-Stop Debate where everyone is trying to say their peace on events all at once. The Non-Stop Debate occurs in real time and is actually also kind of a first-person shooter; the evidence you’ve collected is portrayed as literal “truth bullets,” and you must fire the correct truth bullet at a contradicting statement. 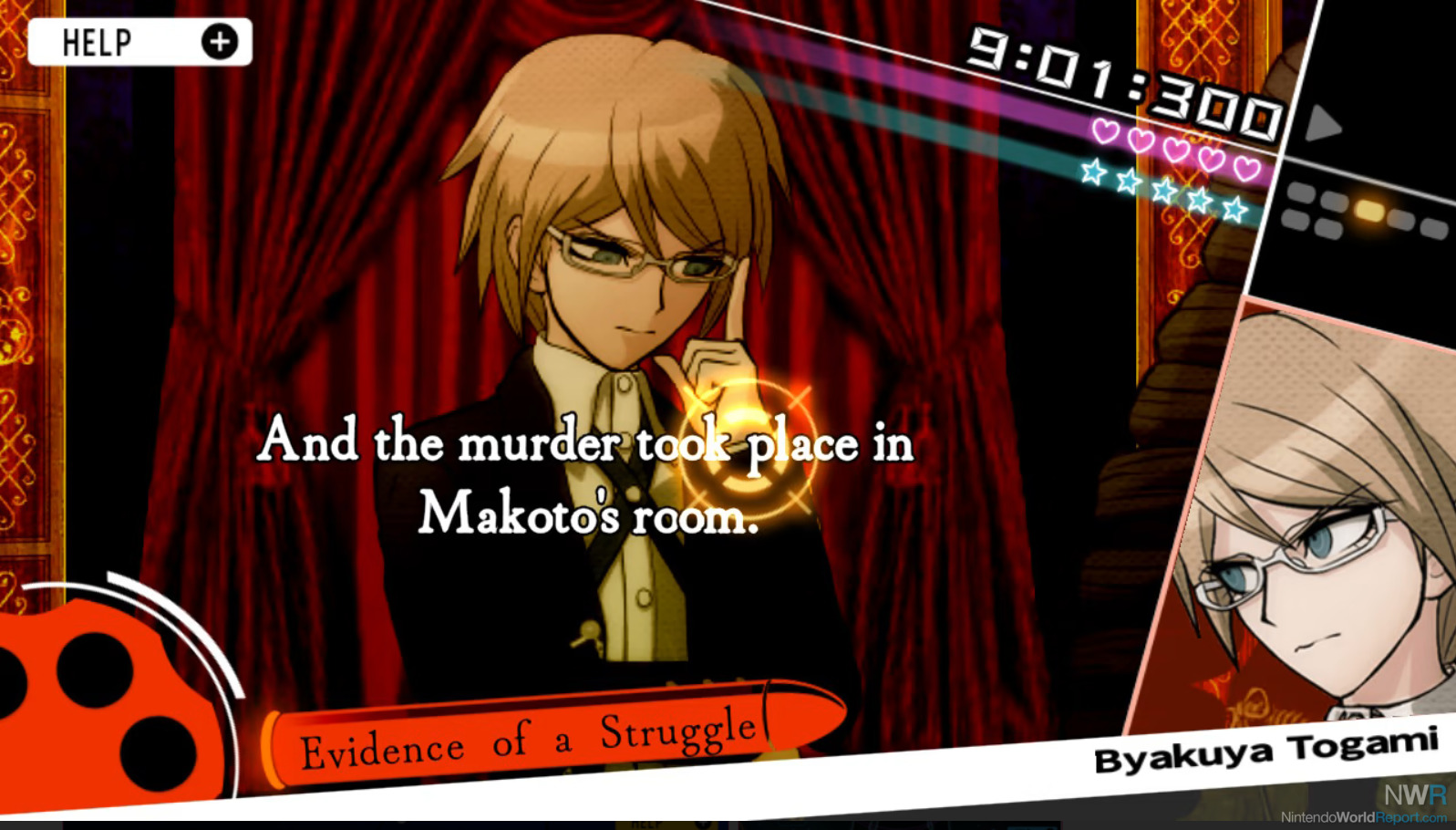 Careful aim and timing is important, as irrelevant chatter from characters around the room (referred to as “white noise”) will physically appear on screen and get in the way of your bullets. Since all of this is happening in real time with an actual timer ticking down, a lot of emphasis is placed on being able to quickly figure out the mystery yourself while under pressure. This encourages the player to really pay attention to the details of a case instead of wasting time thumbing through every piece of evidence to suddenly spot a contradiction.

There are also two minigames that appear in class trials: the Hangman’s Gambit where you answer a question by quickly shooting down the correct letters, and the Bullet Time Battle which is a bad rhythm game. Neither of these minigames are very good, with Hangman’s Gambit tending to be hilariously easy and Bullet Time Battle being incredibly frustrating to the point that I’m pretty sure the timing of the beat isn’t correctly programmed. Thankfully these minigames are rare, with each only appearing once per trial on average. I think it’s telling that the sequel, Danganronpa 2: Goodbye Despair, drastically changed how both of these minigames work to the point that it literally calls a brand new minigame “(Improved) Hangman’s Gambit.” 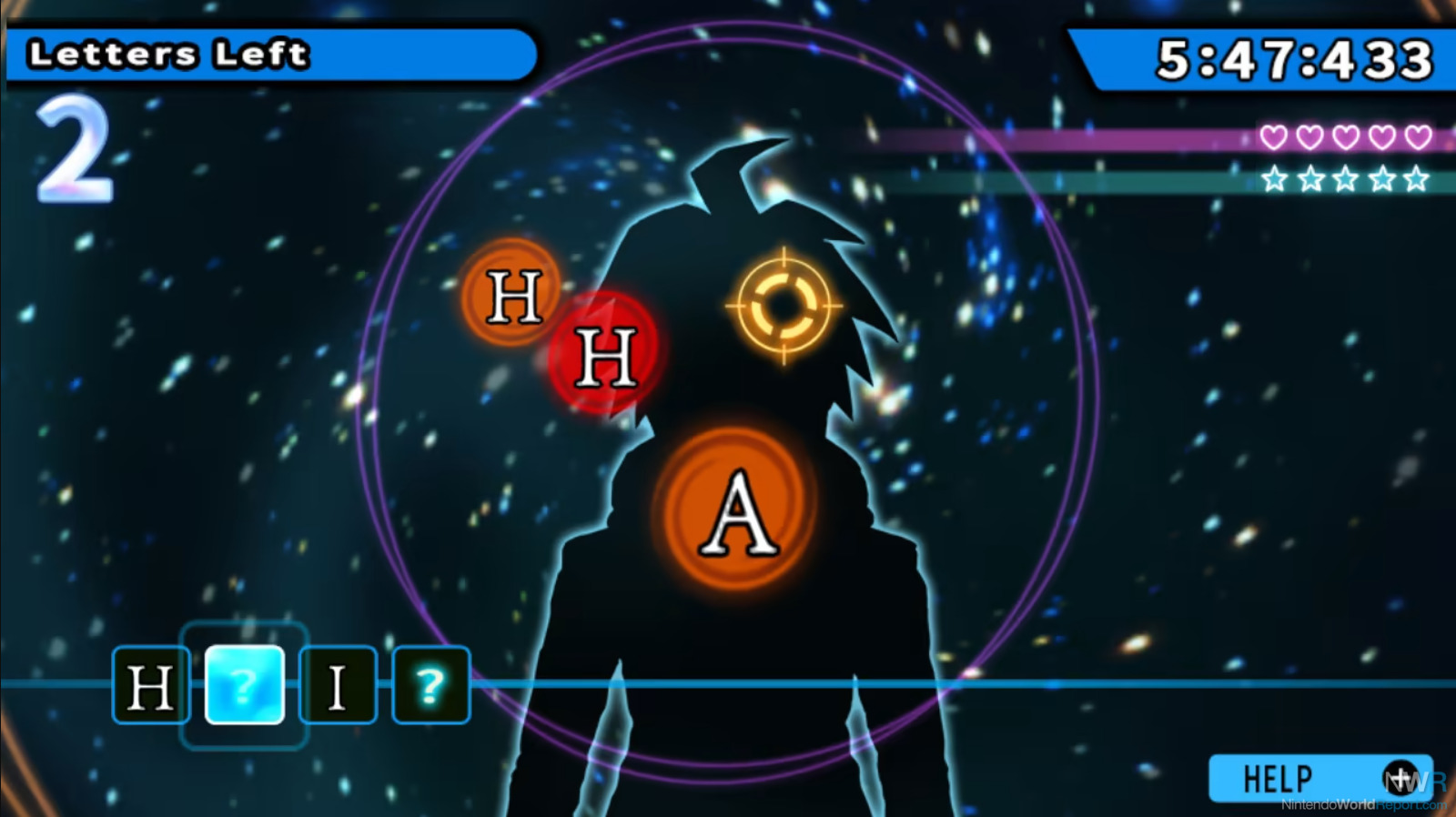 But in a visual novel nothing is more important than story, so let me get a little more in-depth on Danganronpa’s narrative than usual. The greatest strength of the story is that the entire game takes place with the same core group of characters. Unlike most murder mysteries where new characters are introduced to fill the roles needed for each successive case, Danganronpa’s recurring plot allows for unique opportunities to make each case important to the ones that proceed it. Each character gets the chance to be more developed than you’d usually get to see in this kind of game, and the fact that the murderer is always someone that you’ve spent time with and gotten to know ramps up the stakes of each mystery. Victims are not faceless nobodies, and killers are people you may have grown to trust.

Additionally, the circumstances of each murder were never really straightforward. It’s difficult to go into detail without spoiling the story, but there was always some twist on the plot that made each case go beyond a simple matter of “this person killed this other person.” The compelling plot threads and character motivations that were slowly revealed over the course of the game gave me a sense of urgency to see more, and once the game really got going I struggled to put it down despite whatever problems it may have had.

And boy, did it have problems.

Danganronpa’s writing seems to have a lot of trouble managing the flow of information to the player, and I was often frustrated at what the narrative decided was worth focusing on. One major revelation near the end of the game is heavily foreshadowed to the point that I would be genuinely shocked if someone got to the end without predicting it. You will predict this reveal before it happens.

But when the time for the reveal finally comes, a huge emphasis is placed on the shock of the reveal itself, and an actual half hour’s worth of dialogue is spent purely on getting the characters in the game to take the reveal at face value. So much time and energy is wasted on getting the characters to come to conclusions that you, the player, made hours ago, and then when someone finally asks what it all means—a question you have been undoubtedly wondering for a long time—they are simply told it doesn’t matter and the game never brings it up again. 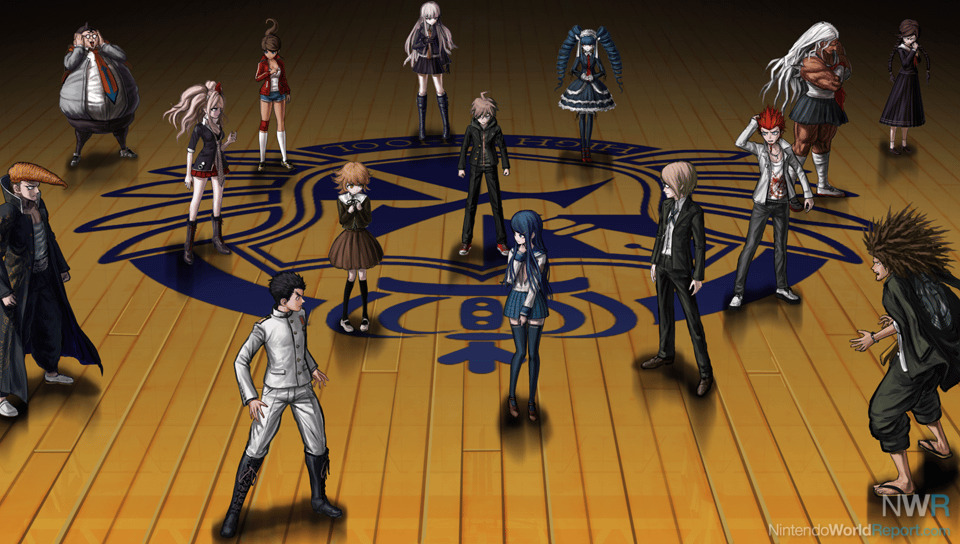 Characters in Danganronpa have a terrible habit of not asking questions that any sensible person would ask, inadvertently making moments that could’ve been clever feel like mistakes. One particular part of the story hinges on learning new information from the victim’s dying message, but this twist comes with the problem that there is no explanation for how the victim knows that information. The message itself doesn’t make sense, and there’s no reason for the victim to have said it, and none of the surviving characters address this problem, making it feel like a plot hole even though a big reveal much later in the game provides a reason for the character to have known this. It’s intentional foreshadowing, but because no one seems to ask the questions a sensible person would, it feels like a mistake.

No character suffers from this problem more than Makoto himself. Since he’s the point of view character, everything that happens in the story is filtered through his thoughts and actions, and he is pretty slow on the uptake. He never picks up on any of the foreshadowing that the game spoon-feeds you, and sometimes he’ll actually resist examining certain things during an investigation in order to prevent the player from discovering something that the writers aren’t ready for you to know.

I distinctly remember one point where the characters are all searching for a missing person, and I was confident that they were in a nearby storage room. Upon arriving at the storage room, Makoto discovered the door was locked and he just remarked that it “was weird” and wouldn’t question it further. When I gave up and left the room, I ran into another character in the hall that said the missing person had been found in the storage room. A good point of view character should help the player notice details in the story, but Danganronpa’s main character spends more time actively holding the player back. 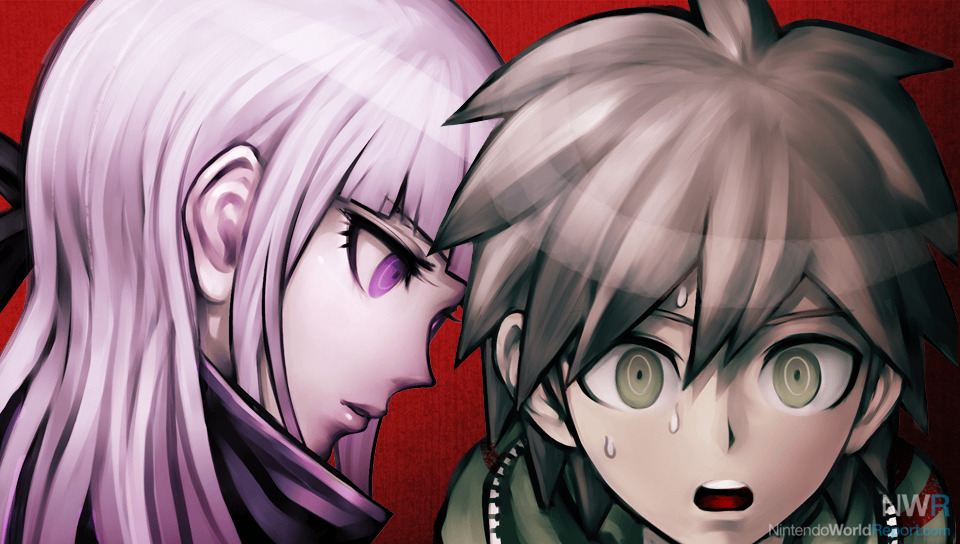 So what’s up with the Switch port? Well, somehow there are some pretty significant framerate issues present both while walking around the school and during Class Trials. The framerate in trials gets especially bad close to the end of the game as white noise starts to fill the screen more aggressively, making it difficult to aim your truth bullets properly. I know that’s technically the whole point of white noise, but I have a feeling that causing a hit to the game’s performance was not the way the developers meant to increase difficulty.

It’s bizarre enough that a port of a PSP game is struggling on Switch, but this version also happens to be based on the Anniversary Edition released on mobile devices in 2020, and some pretty significant problems are inherited from it. A bizarre lack of care has been given to the new Character Gallery section, and voice lines are labeled with captions that appear to be generated from speech recognition software. “Lies will get you nowhere” is labeled “lie will get you know well,” and “I refuse to vote” becomes “I refuge the vote.” 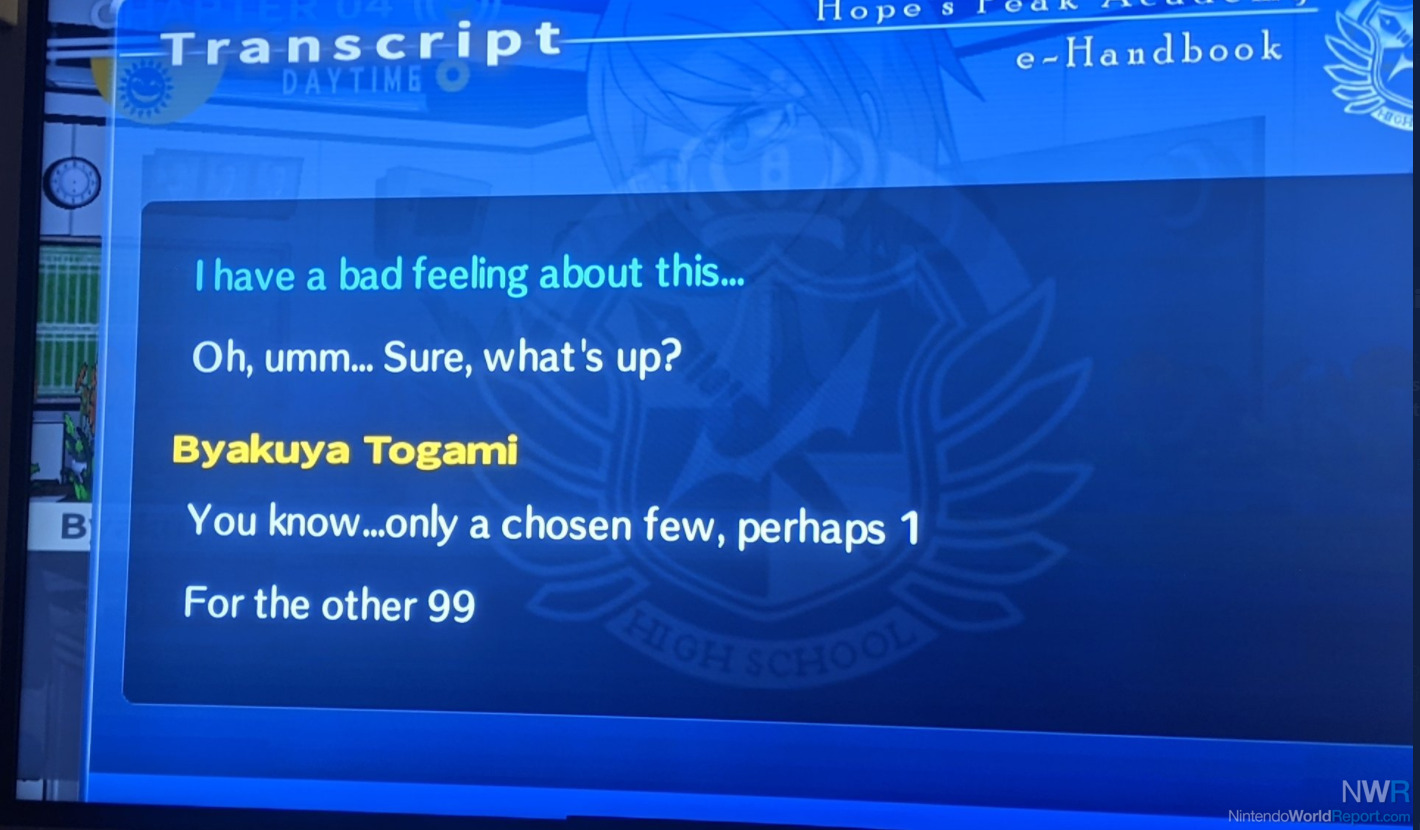 Things get worse in the game’s actual script where there is a bug that causes any line of dialogue with a percent symbol to simply fail to load. The dialogue stops where the symbol would be and completely skips the rest of the text box until you advance to the next line, rendering some conversations completely unintelligible. This bug also exists in the mobile version of the game, and based on a currently-ongoing YouTube playthrough of the iOS release it still has not been fixed. The only conclusion I can come to is that either this version was not playtested from start to finish or that they simply did not care enough to fix such an obvious and critical bug in two different releases of the game.

I have a lot of trouble summing up Danganronpa in terms of whether or not I like it. Its overall structure—in both narrative and gameplay—is inventive and unique to the point that it feels fresh even a decade after its original release, but I spent a lot of my time with the game feeling frustrated and underwhelmed. Despite that, I was constantly compelled to keep coming back to it; I didn’t want to put it down, and right now as I write this review I am already two chapters into its sequel. It is a game that I believe fails to live up to its potential in big ways, but it also manages to rise above its own failures with its strong sense of style and ingenuity.

Sadly I am much less conflicted on the quality of the Switch port in particular. While none of the problems are significant enough to truly prevent someone from enjoying this game, the fact that such fundamental problems from a previous version have not been addressed makes it difficult to justify this version over any others. I think it’s worth seeking out and trying Danganronpa for yourself, but I can’t recommend doing so by playing a port of the mobile version running poorly on Switch.