You can throw a rock and hit a dozen games touting “deck-building” and “roguelike” elements. I’m at a point where, even though I’ve enjoyed a ton of games in those styles, I’m leery of what another game in that wheelhouse can do that hasn’t been done before. In comes Devolver Digital and Four Quarters Team’s Loop Hero, a game that takes roguelike and deck-building elements and turns it into something that almost resembles an idle clicker. It’s equal parts wildly engrossing and inscrutable, succeeding by making each run feel unique and ensuring progress is moving ever forward. 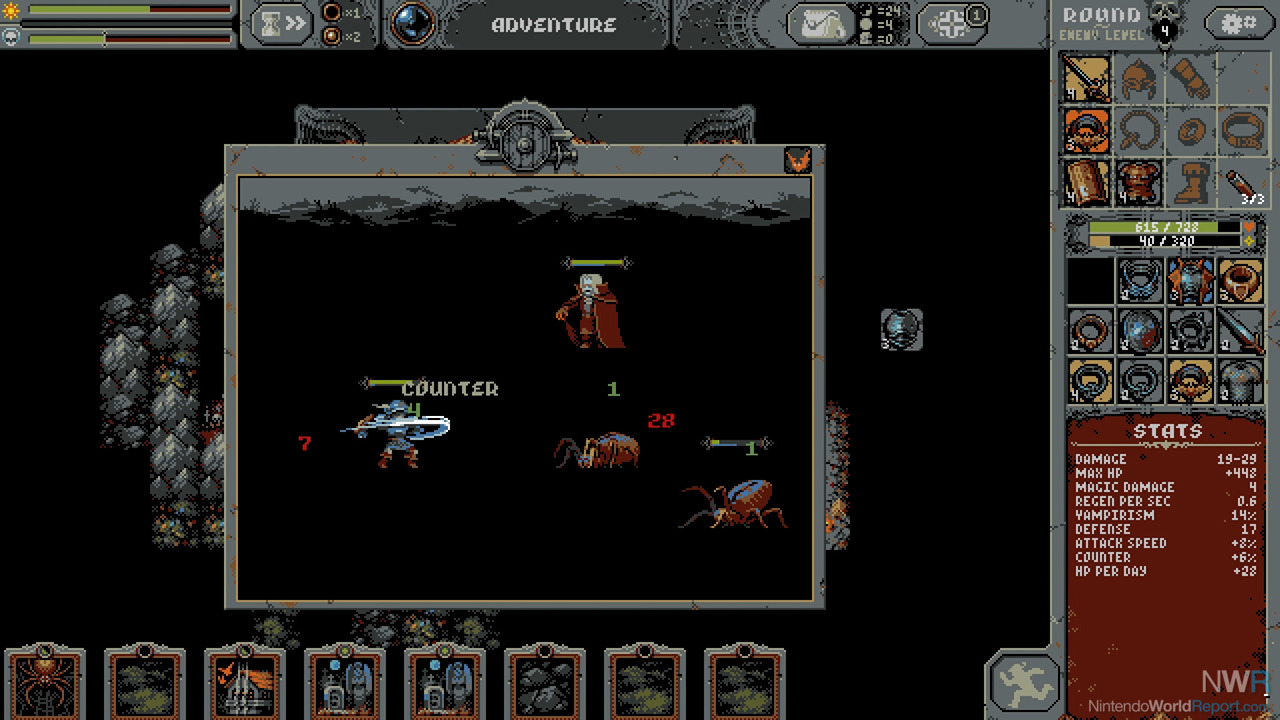 Split up into four chapters, you loosely guide an adventurer trying to put the world back together. A run in a chapter begins with a randomly generated looping path appearing on the screen. Your hero starts from a camp space and when you’re ready to adventure, proceeds to journey through the loop, automatically fighting enemies as they show up. As you win battles, you earn loot in the form of equipable items and cards. The items can improve your hero’s stats while the cards can be placed on and around the looping path to alter the landscape or boost your stats. Some early cards include rocks and mountains that can be placed far outside the path and increase your defense, as well as a spider’s nest that spawns a spider on the path every so often. The ferocity of the enemies increases as you complete more loops around the map, and eventually a final boss for the chapter will appear, forcing you to fight.

Failure is a regularity, as you’re liable to get your hero’s face pounded in if you try to just blaze through to the end. Knowing when to fold your run is important as in addition to the items and cards, you earn resources that you bring back to your village base after a run. These can be used to upgrade the area, resulting in starting buffs, new cards, and other player classes. Depending on how you exit a run, you can bring back somewhere between 30% and 100% of your resources back, and then feed that into the village to make your next run start from a stronger place. 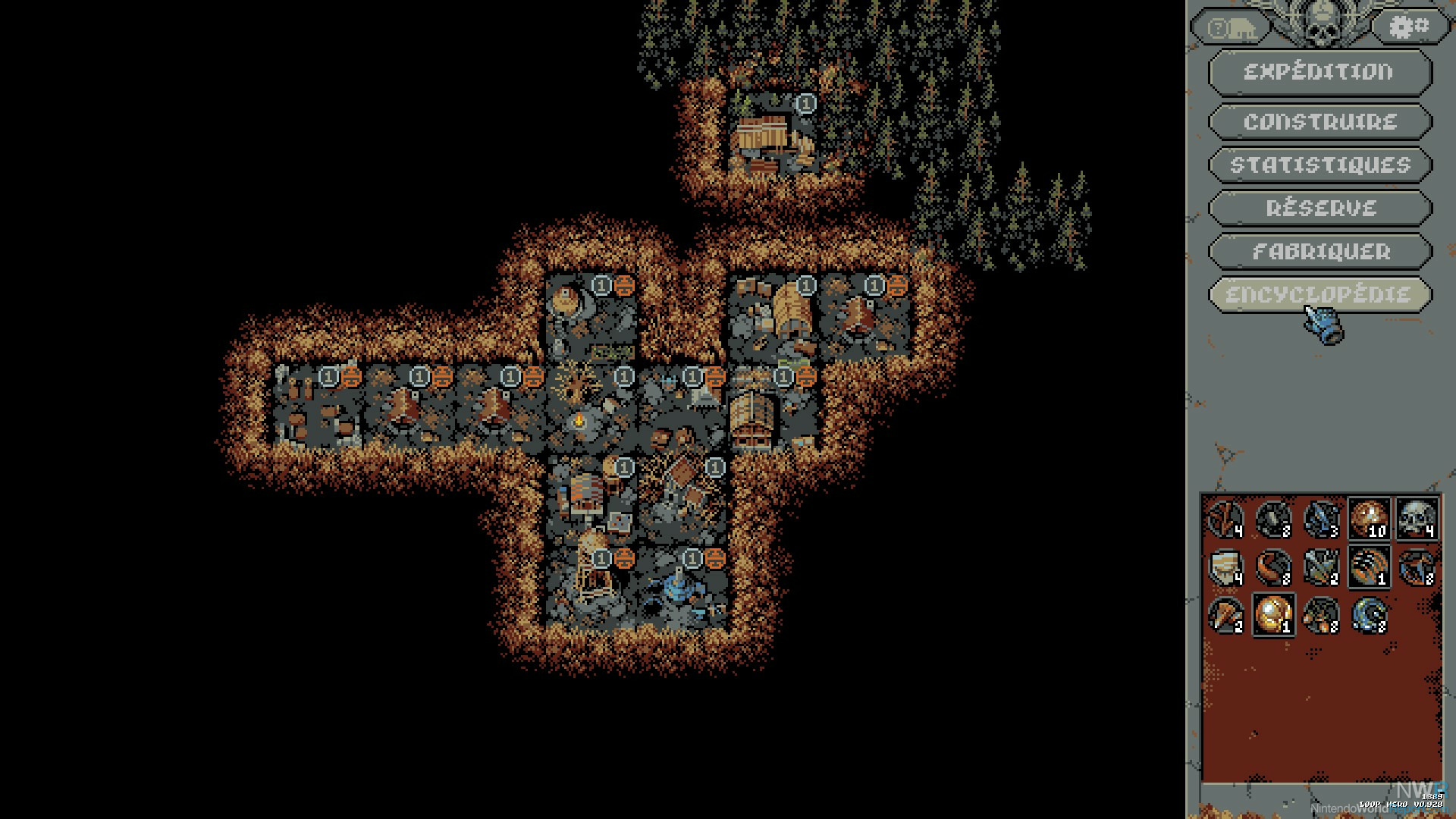 Repetition is at play throughout all of Loop Hero, but it becomes addictively endearing because of how intertwined all the various looping elements are. Building your card deck and playing your hand in certain ways can unlock different synergies that can give you an advantage or benefit on a run. Unlocking the two other classes can tweak your character-building focus on a subsequent play. The constant risk vs. reward feeling makes every decision you make have a consequence. You could lay out a ton of enemies on the path so you can get better loot, but if you don’t make it back to the camp, you run the risk of dying and losing the majority of your resources. The way the game keeps building on top of all these systems is delightful, adding new wrinkles to tinker with and new aspects to discover.

All that depth is where, for better or worse, the aforementioned inscrutability comes into play. The basics are explained well, but the game does a so-so job of shining a light on its depth. It’s a tricky tightrope to walk because part of the enjoyment is that discovery and exploration, but I won’t lie: it took me thumbing through a few guides and posts about Loop Hero online before the whole game clicked for me. It’s low-key oppressive at first until you understand how the systems and looping works together. Once you have that “a-ha” moment (which might be at far different times for different players), Loop Hero is electric. 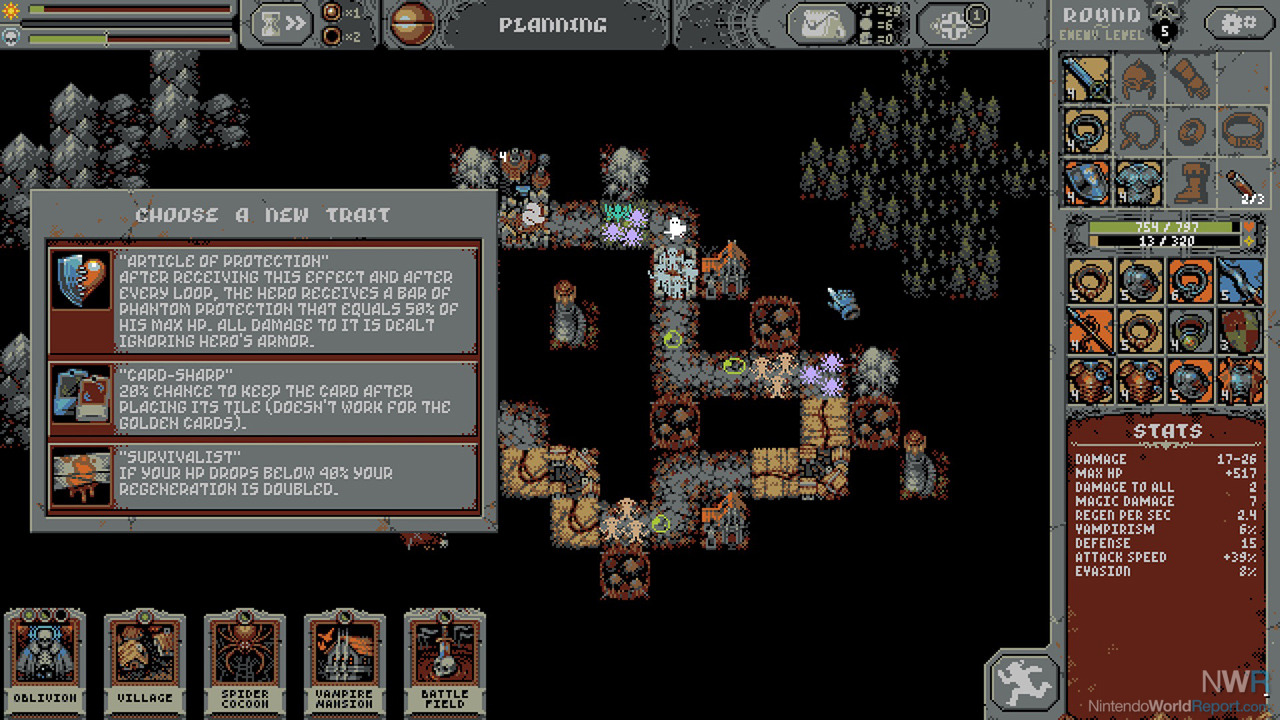 The Switch port is soundly great, letting you effortlessly bounce between button and touch controls. I preferred to use buttons for some actions and touch for others. The way both options are just present at all times is great. The interface is clearly meant for PC, which sometimes makes it unclear how to navigate the interface, but aside from a few “right-click” mentions that don’t make any sense, it’s nothing more than a gentle reminder that this is a port of a PC game.

In order to reach the ending of Loop Hero, you will have to roll through dozens upon dozens of loops, but the way new concepts layer over the basics keeps it fun as you strategize to plan out your challenging loop that will earn you the best loot while ensuring your survival. With new elements dropping in consistently as you grow your village, it rarely stays staid for long. Some of the finer points might require some dumb luck or an assist from a guide, but if you’re ready to just poke at a rock solid concept until it cracks and bends to your will, Loop Hero is amazing.