The Legend of Tianding (Switch) Review

The year is 1909, in the Dadaocheng area of Taiwan where Colonial Japanese authorities are running amok. You play as Liao Tian-Ding, a vigilante who has made it his purpose to rid his land of those who do not belong there, all whilst aiding the poor by stealing from the greedy and the rich. Through his efforts, he uncovers some dark secrets and evil schemes, and as any hero would, he takes it upon himself to thwart the villains and restore his beloved Taiwan back to how it was before.

Dubbed Taiwan’s Robin Hood, Liao Tian-Ding is that and much more. The story is a clever mixture of a classic Robin Hood tale fused with your traditional kung-fu flicks of the ‘70s to create a hero with charm, humour and above all else, a heart of gold, who you can’t help but cheer for—and take great joy in playing as. It adds extra intrigue for me, knowing that this video game and most of its narrative is based on real events that are said to have occurred in early 20th century Taiwan. 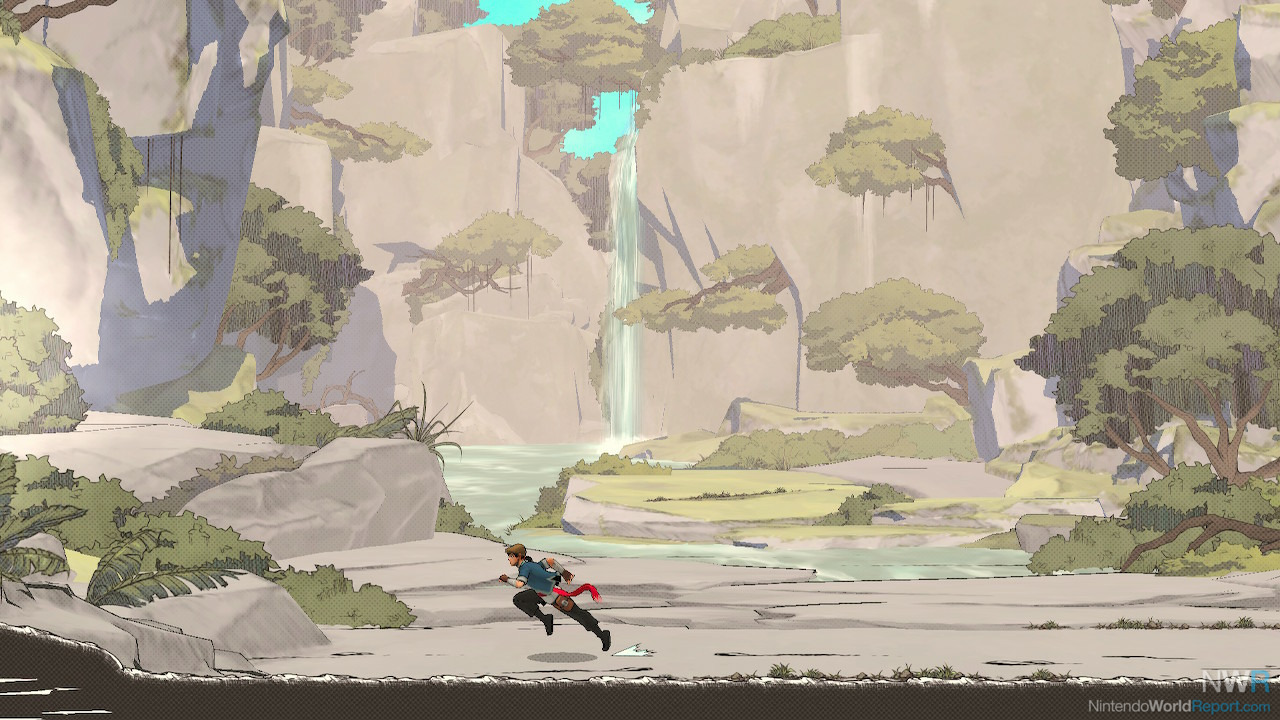 Published by Neon Doctrine, The Legend of Tianding is an action-adventure, side-scrolling kung-fu beat ‘em up, where you play as the legendary Tian-Ding. Throughout your journey, you are equipped with kung-fu skills, an upgradable blade, and a sash that can be used to tie up enemies or even steal their weapons! The combat in The Legend of Tianding is polished and can become combo heavy, enabling you to string regular attacks and fighting arts together, along with rolls and dodges making you feel like a true kung-fu master. Fighting arts, which are your signature moves, use up your stamina bars, so these should be saved for when they’re needed early on. The sash can be used on a vulnerable enemy to disarm them and steal their weapon, which Tian-Ding can use for a short period of time. This adds a unique layer to the already fun combat, as these weapons vary massively from swords and staffs to pistols and grenade launchers.

The Legend of Tianding includes several RPG elements to the game where you can effectively level up Tian-Ding and modify him to buff what you see most valuable. Throughout your campaign, you can use specific items to increase your max health, upgrade your default weapon via the city’s blacksmith, add levels to your stamina bars, and increase the size of your purse, where you can equip a limited number of amulets to Tian-Ding. These amulets can be found after defeating certain enemies or given to you after completing optional side-quests. Once equipped, they will add certain effects onto Tian-Ding, allowing you to customise the way he plays. These effects can range from reducing the damage taken from certain hazards, allowing him to triple jump, or restore more health than usual when consuming buns. The amulets equipped can be amended at any time in the pause menu. The pause menu is also home to your list of objectives, your map of Taipei, and the collectables section. The collectables in this game are fascinating. They can be found almost anywhere and a large majority of them add buffs to specific weapons or the passive attributes to Tian-Ding. All the collectables are either relevant to the story, the setting, or the time. I would find myself scrolling through the extensive list and looking at the images and reading the brief descriptions of what they are. These collectables span from alcoholic drinks to food items, posters, matchboxes, board games, and many more miscellaneous items—a fascinating section, especially if this period of history is of any interest to you. 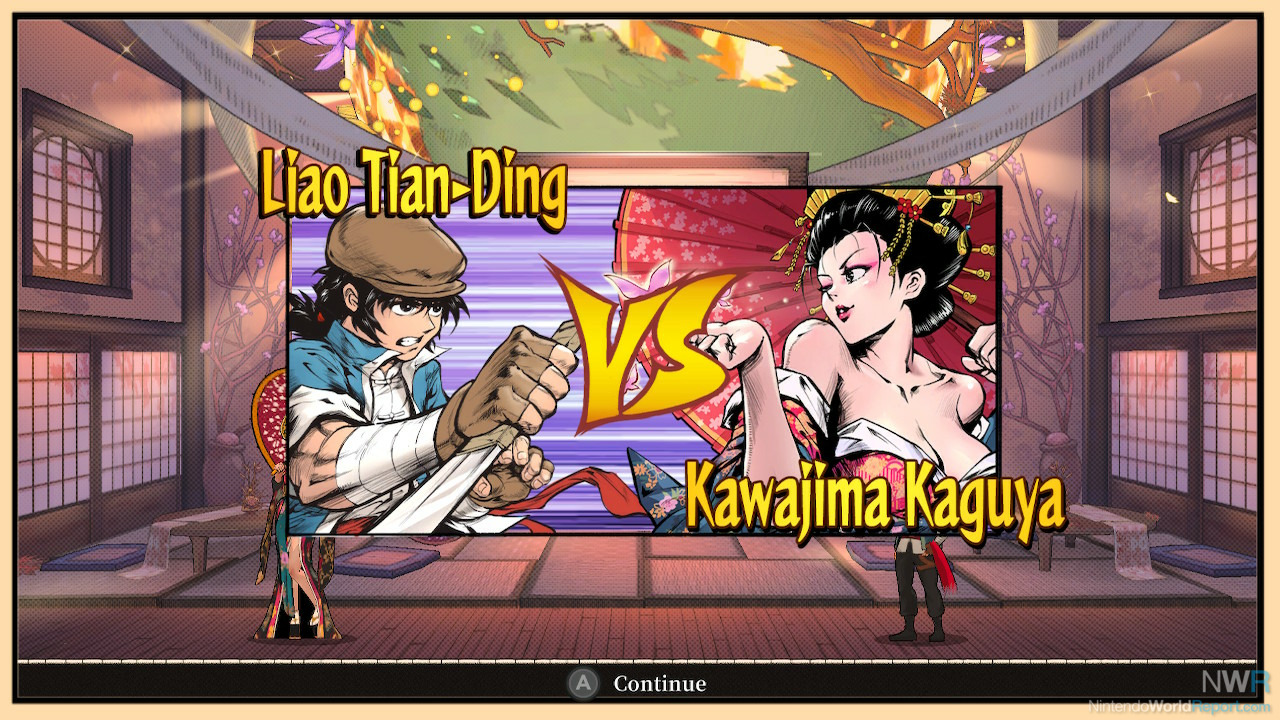 The roughly five-hour runtime progresses via several chapters. Each chapter will start with a comic book style presentation to give you the rundown of what is happening and a tease of what’s in store for this section. When loading the game and continuing a save file, you have a small summary of the chapter you’re in as well as a character breakdown of the key people involved. This was a nice add-on to the appearance of what could have been a plain screen. The chapters are all varied, too. Some are very combat heavy, focusing on exploring hideouts and taking on countless enemies, whereas others are more objective-based: recovering items and exploring the city more, speaking with anyone and everyone. I feel the game balanced these quite nicely, as endlessly defeating grunts at times became tiresome, and the game knew when to switch it up, keeping me intrigued and focused on the story. 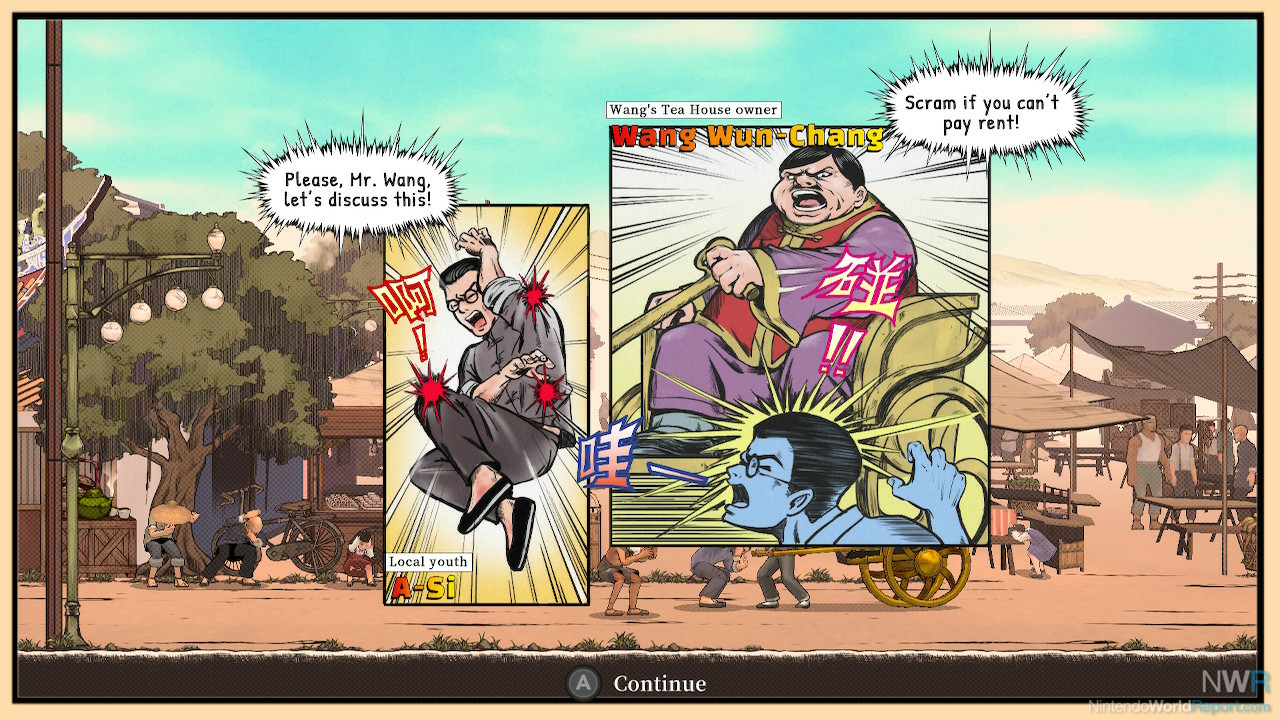 During breaks in the action, panels similar to traditional Chinese manga will flash on-screen to provide more detail on who is talking or their given action at that time. This art style was one of the high points of this game, adding depth to some side characters and the bosses of that chapter. The developers did a fantastic job giving everyone a unique and attractive personality; I would genuinely sit and read a full manga of The Legend of Tian-Ding if it was written and presented this way. Outside of these comic book panels, the setting and backdrops of the game also shine. Again, taking inspiration from East Asian art, the backgrounds of this game were a beautiful watercolour style, many of which I would happily have hung on my wall—especially the waterfall and cliffs of Mount Guanyin.

Although the streets are full of life and great to look at, running from place to place can become more than a little monotonous. You unlock a fast travel option quite early on, but again, these will only take you to specific locations in some areas that are quite large. Some objectives would force you to go from one side of the city to the other to collect food or cloth from a shop owner, to then run back to where you were with no combat or other events in between. Thankfully tasks like this didn’t happen too often, but I heaved a sigh when one popped up.

If you ever get tired of the story or want a break from combat, you can sit down with some locals and play a game of Four Color Cards—a traditional style Taiwanese card game. Its rules are somehow both simple and complex; it plays kind of like rummy but also not. I didn’t quite understand how to play, but card games (unless it’s Yu-Gi-Oh!) are not my thing. I played it once for the tutorial and never returned, but it is a nice addition, and a fun way to teach some history of what people may have played during this period. 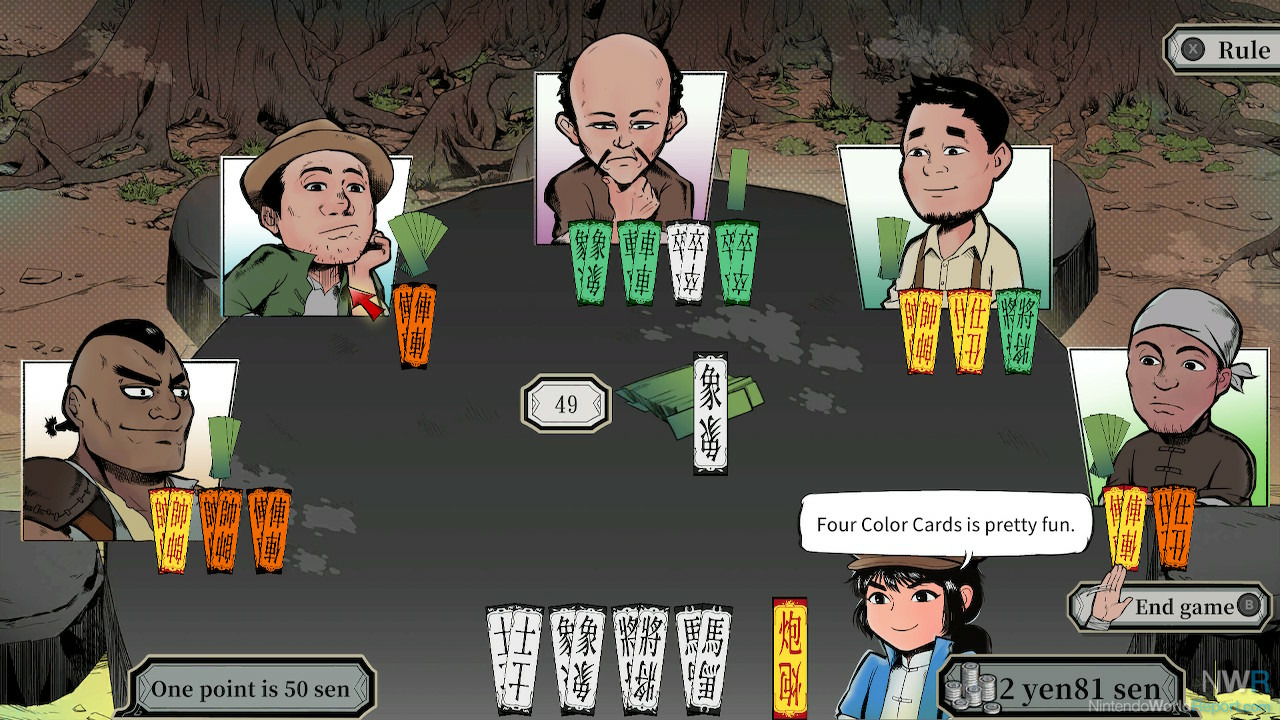 Everything from the combat to just running around the streets runs ultra-smooth. One issue I found was that the load times between areas, new chapters, or returning to the game took a very long time. The long load screens are accompanied by a “wait a second” message which for some reason just makes the wait feel that much longer. It would have been nice to see some historical details provided during the load screens to make the time pass by a little faster.

The Legend of Tian-Ding is an action-packed, kung-fu tale with great writing and an even greater art style. The comic book depicting 1900s Taipei is glorious and such a gorgeous aesthetic to play through; Its use was well executed and added layers of humour, threat, and depth to all characters of this heroic tale. Tian-Ding is a fantastic indie hidden gem that I hope becomes, like Liao Tian-Ding, legendary.