Hope: A JRPG in the Danganronpa universe. Despair: They added Mario Party to it.

Having stuck to the main adventure modes in the Danganronpa series previously, I was more than a bit confused when Danganronpa S: Ultimate Summer Camp was announced as part of the Danganronpa Decadence collection in June. After reading up on the minigame it was based on, I held out hope that it’d be something worth sitting down and grinding through. What ended up happening at the summer camp was a whole lot of grinding, which works for someone who wants a quick RPG, but will require the patience of a saint to 100% complete.

The plot of the Summer Camp is basic and in fact, the game explicitly tells you not to worry about it. Virtually every named main character in the Danganronpa series—all three games that come to Switch at the same time plus the Ultra Despair Girls spinoff—are taking part in a virtual graduation trip, with the children of UDG along for the ride and the mother of a character presumably serving as a chaperone. The virtual world is divided into six islands, but a group of monsters ends up blocking the path to each island. The person you pick to play starts out on a game board and has 50 “days” (turns) to grow their “talent” and open as much of the island as possible along the way. At the end of that time they can choose to apply Talent, an actual currency earned in the game, to learning skills that can be taken to the game’s “Battle” mode, known as the Tower of Despair. The Tower is a series of battles against the enemies encountered on the board at ever-increasing power levels, with 200 levels divided into four “towers.” There’s no actual plot in the tower that I was able to find in the review period. 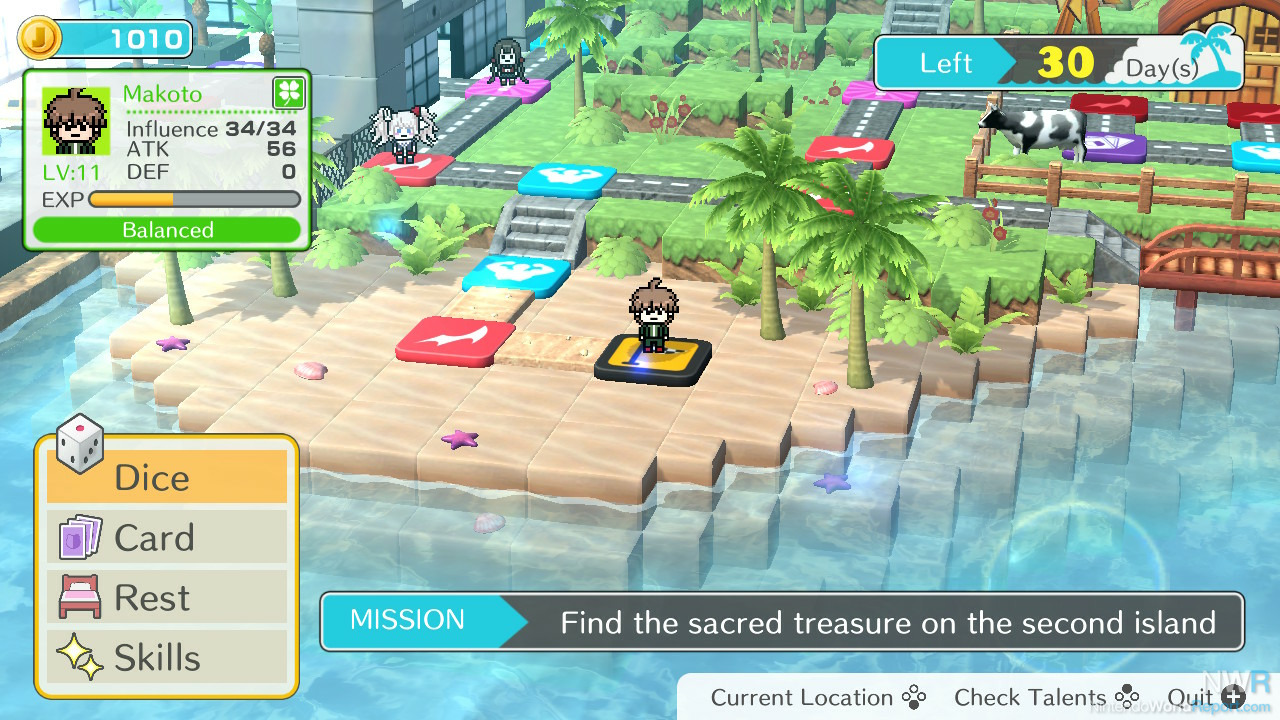 The board game portion has a wide variety of things to hit (or avoid). Battles can occur on the map, as well as event scenes either solo in a pixel art style or the “Friend Square” that plays out a scene between characters. Spaces are also present for boosting stats, whether through natural gains or by buying equipment, which get carried into various boss fights that open the way to different islands. Along the way, cards will be picked up that can change movement including warping the character, and also provide temporary buffs if a battle is about to happen. After the turn, random effects can happen where the money count, stats, or location of the character can be changed. I quickly found that a “success” card (which guaranteed the good outcome from one of these events) was vital to keeping stats up. When a battle happens, it’s a turn based affair that rips off Dragon Quest shamelessly. Considering every non-boss enemy in the game I could find had an appearance based on the series’s mascot Monokuma, there’s actually a lot of variety in the enemy designs even if they do have the same face. Experience levels are all based on 100 points, so the further into the game I went the more I would gain two levels after a single fight.

If you care enough about the Danganronpa series, you’re probably here for the fanservice of the “character interaction” variety. Although the other kind of fanservice is also present; the game’s set on a series of tropical islands for a reason. The character selection to start is slim, with just five characters, though it does give experience with the three “types” of characters (athletic, intelligent, or lucky). Getting more characters, however, requires going through the Tower of Despair or completing ingame achievements to earn one of the three different currencies, which are taken to the “school store” and used in a gacha machine. There are 62 characters to pick from, each one at one of four different rarity levels, and each one possibly having a “hype effect” that also comes out of the gacha. Said gacha also drops items for boosting stats in the board game. See the problem? Although all of the game’s content is supposed to be available through normal gameplay, I found the loop of “play board game for 30-45 minutes, run tower with units, spend coins, repeat” got old by the time I had a quarter of the characters available in any form. I can see where the temptation to spend money would come in, especially on the higher rarity versions, but I wasn’t able to see the microtransaction costs because the ingame “vending machine” soft-locked the game when I clicked on it. This will go live on launch day, but it’s easy for this game to become a game you pay for to spend money on currency (which is why I suppose it’s basically free if you’re getting the “Decadence” physical release). 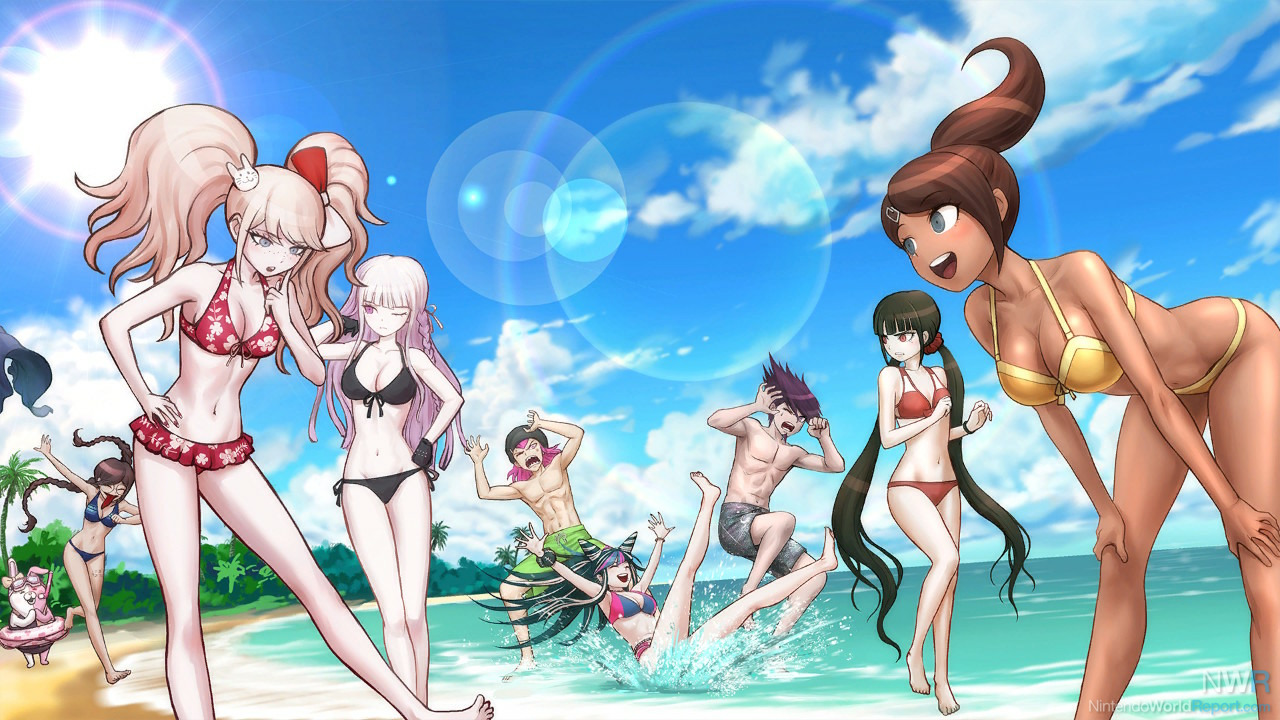 This is what we meant by the "other kind of fanservice".

Aside from trying to hit a store that didn’t actually exist yet, I did have one soft lock after locking in skills at the end of a run; thankfully the autosave brought me back to the end of the last turn so it was easy to get back to that point. The characters are frequently represented in pixel art form on the board, which is normally fine both docked and handheld. The only graphical complaint I had came every time an island would open: the islands are obscured by some of the worst-designed fog on the Switch, and I’m not sure if it’s an example of stylistic suck or just bad design. Each of the areas in the board game has its own theme song which is more bombastic outdoors and muted indoors. There’s no full voice acting; even the opening sequence and Friend Squares use quick voice clips that are recycled from the source games.

Danganronpa S: Ultimate Summer Camp is a good game for two distinct groups of people: those who went for 100% completion of the adventure game trilogy and those who want an incredibly brief RPG. If you’re in either one of those camps, then it’s worth signing up. Otherwise, stick to the adventure games.

A review code was provided by Spike Chunsoft