I assume the lift was broken?

Do you like chess, but wish that you only controlled one piece that is a scythe-wielding warrior’s soul, where you navigate across a board, fighting demons, and ascend countless floors to reach the peak of the tower? You do? Well, why haven’t you ever tried Evertried? In a nutshell, you could describe Evertried as this, but it is so much more than what I’ve described. Evertried is a tactical roguelike in which you are a lost soul who must ascend a mysterious tower in the afterlife through trials. These trials are set on an isometric chessboard floor, full of enemies and hazards trying to stop you. Your job is to climb up these floors, using skills and strategically planning your movements, dashes, skills, and attacks to reach the top. If you fall in battle, you are sent right back down to floor one, only keeping with you any mastered skills.

Evertried is a Kickstarter-funded game, developed by Lunic Games in partnership with Danilo Domingues, who is the lead programmer of Evertried. Some of the pledge tiers offered perks such as having your name in an item’s lore or being named as an NPC, alongside a special thanks in the credits no matter what tier you subscribe to. With a small development team who are passionate and a huge backing via Kickstarter, there is always some level of expectation, and you can really see the focus and attention to detail that has gone into this game. For anyone who pledged, the team delivered in spades. 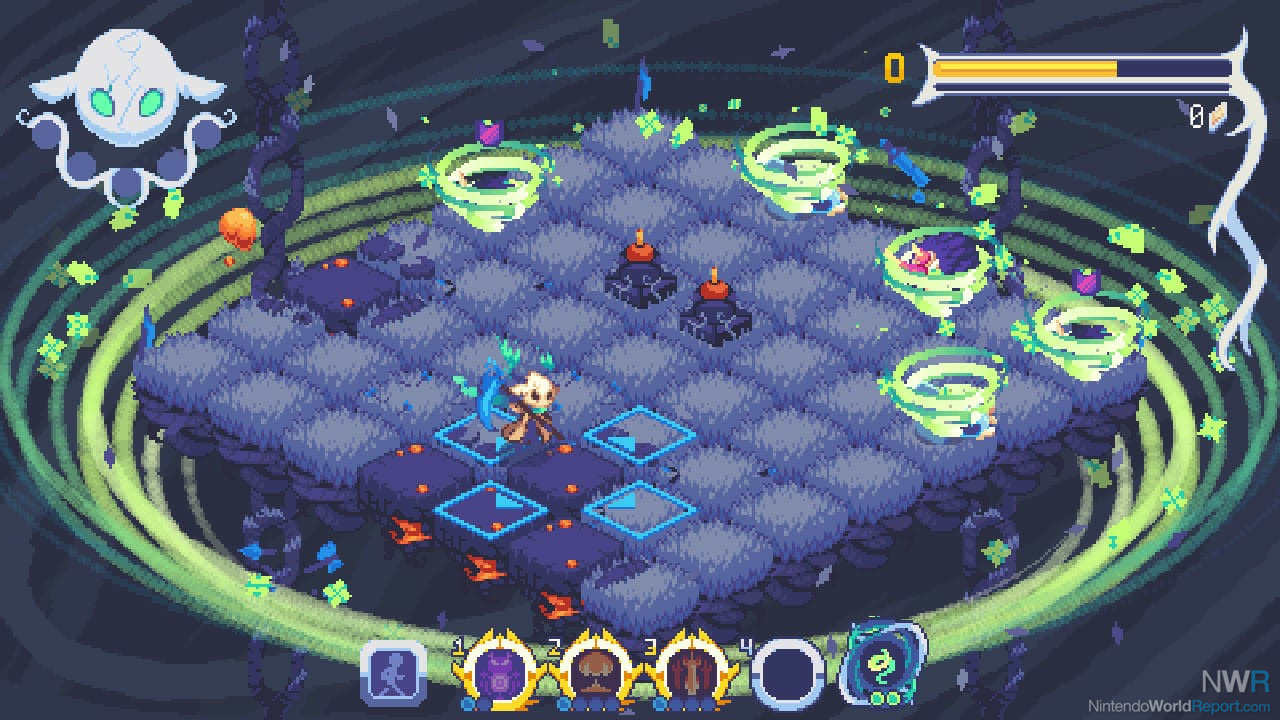 With Evertried, you dictate the pace of the game, which plays out in a turn-based fashion where no enemies move or hazards act until you have moved. You can use this to your advantage by carefully planning out your next move or next three moves. Stringing several moves and attacks together in quick succession increases your focus level, which supplies you with more shards and adds charges to your weapon, which is how you use the skills that can be purchased with said shards. The need for charges adds an incentive to keep up the pace and action. I did find however that the penalty for taking your time doesn’t impact the speed in which you collect as much as you would have thought. Personally, it’s better to take your time and not fall than to make a false move and have to start from floor one again.

If you aren’t used to isometric strategy games, you may find the movement controls a little awkward at first, but these become second nature soon enough. Evertried begins by giving you the option of normal or inverted controls. To me, inverted looked more natural and that is how I played through the game. I also made use of the D-pad when moving the warrior to avoid any incorrect inputs, as any false move on any floor can be disastrous. The movement and gameplay are very fluid, and it looks and feels incredible when you can string several moves together in quick succession.. You attack by moving your directional button towards the enemy or selecting A. You can also utilise a dash function at any time. This is a highly useful mechanic to escape a predicament or chase down an enemy to keep your focus meter going. 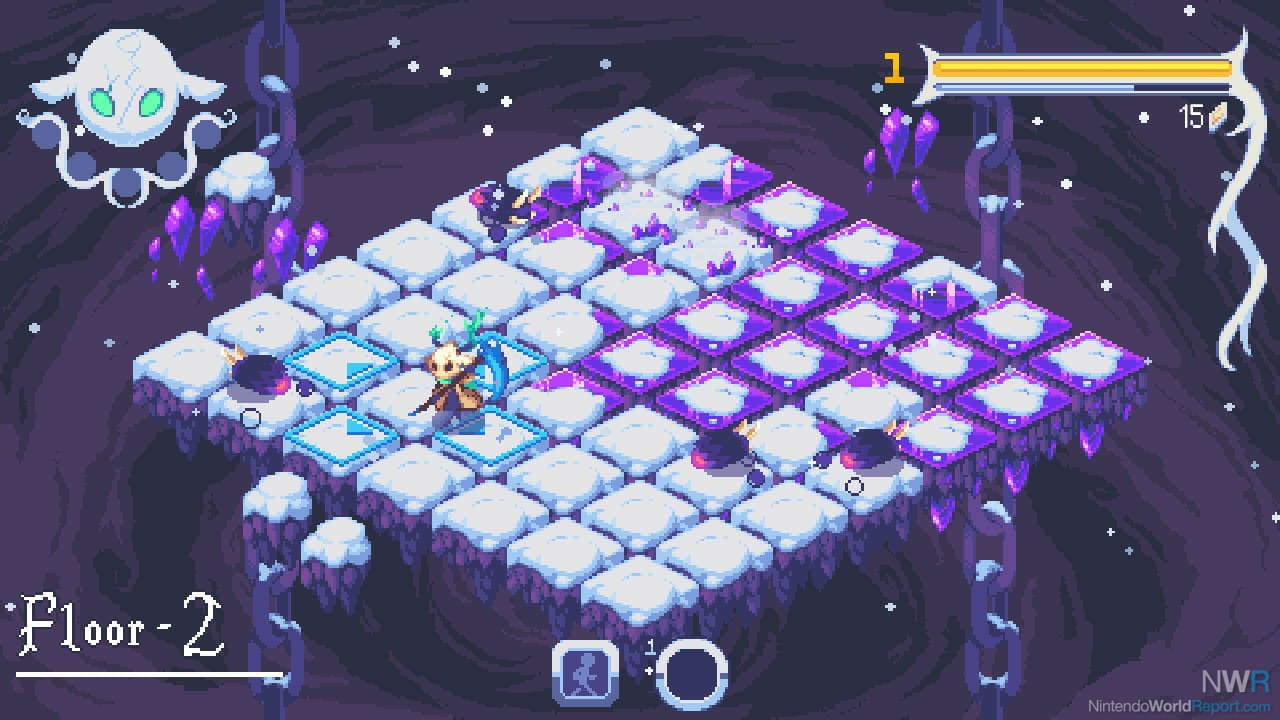 Not every floor has enemies out to defeat you, though. At random times you may come across a shop floor. This is where you can spend the shards you’ve earned from defeating enemies. You can spend shards on healing yourself and purchasing skills and modifiers. Skills can be activated by pressing X, allowing you to perform actions such as shooting a harpoon across a floor, or randomly targeting a foe and defeating them, or tagging them for bonus damage. Employing skills uses up your charges that you collect by defeating enemies or simply moving. Modifiers are passive buffs that activate based on your focus level. Your focus level increases the quicker in succession you defeat enemies; some modifiers require higher focus than others and will light up on screen when their focus level has been reached. Examples of this include restoring your health by one after a certain number of enemies are defeated or on occasion leaving a trail of fire behind you when you dash. Modifiers are important to ascend further into the game, meaning they represent another incentive to get off to a strong start and build that focus meter with rapid gameplay. Choosing the right skills and modifiers could be the difference between ascension and failure. The other type of floor you can come across is a floor with other lost souls and warriors who are taking a break from the ascension. On such floors, you can speak to and interact with everyone there. Some will share their own personal backstory, pass on lore of the tower you are ascending, or help you discover more about your warrior’s story. Others will provide helpful tips, assist you with mastering skills, or even heal you. One part of these floors that I find really cool is that if you fall and start from floor one again, but then encounter an NPC you had met before, they remember you and your conversation with them deepens. It is important to note that these floors do not count towards your ascension to the top. There are fifty floors in total with a boss level every ten floors. These boss levels vary from strategically chasing down and attacking your foe over and over to just flat out trying not to die whilst you chip away at their health. Being a roguelike, Evertried’s trials are different every time, with only the boss encounters remaining the same. I found that on some runs, I had died four floors in and then the next I was well into the teens before starting to struggle. This game is extremely difficult. At first, with no option to lower the difficulty, and no save points, I was frustrated and had to step away from the game, but upon returning I became addicted. I couldn’t put it down. Each time I fell, I knew it wasn’t the game’s fault. You learn from your mistakes and implement them into your next trial run. However, I do wish that a save point was implemented as ascending through all fifty floors in one sitting sometimes isn’t feasible. Maybe even a mechanic where that save state is removed once you do fall; it would have been nice to just pick up where I left off instead of leaving my Switch in sleep mode and the game open. 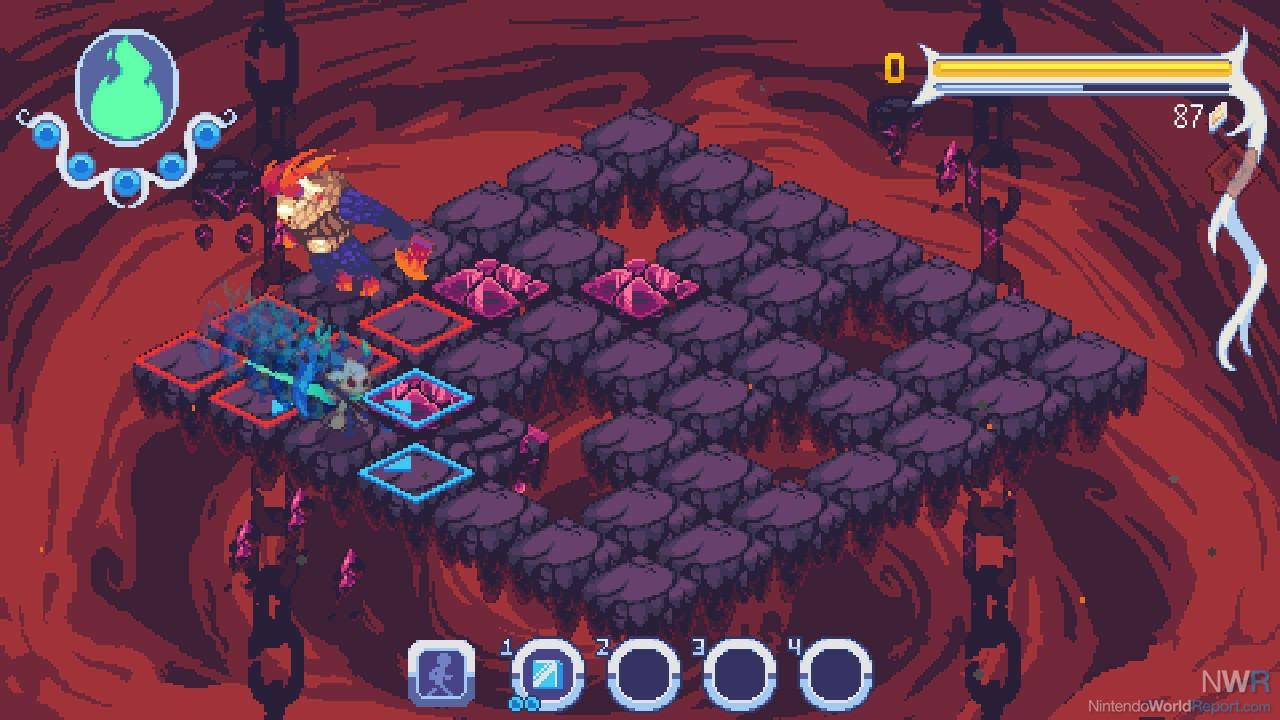 Evertried is visually kept simple, and this works to great effect, allowing the game to do all the talking. The colors are bold and every ten floors you are greeted with a new palette and new floor mechanics, which helps keep the game fresh and demonstrates the feeling of progression for the player. The game is especially pretty in handheld mode. One of my personal favorite aspects of Evertried is the music and sound design. The music was composed by Moonsailor, who created a low-key, melodic, dreamlike vibe that complements the timeless, retro-pixelated art style very well.

Despite its difficulty, Evertried is almost faultless in what it attempts to achieve. The gameplay is tight, the music and visuals are both fresh and nostalgic, and the roguelike tower aspect and difficulty will have you coming back for “just one more run” until you ascend to the top. And even when you do, this game will have you coming back for more as you attempt to better previous scores and times.