Cruis’n Blast is the first entry in the classic arcade racing franchise in nearly a decade, and it’s determined to bring the series back with a bang. It’s a port of the 2017 arcade release with more tracks, more cars, and dedicated progression to earn experience, upgrade your ride, and unlock more hidden vehicles that range from stylish muscle cars to a literal stegosaurus. Cruis’n Blast has a ton of style, and it backs that style up with an equal amount of substance.

The world that Cruis’n Blast’s races take place in is absolutely buck-wild with crazy setpieces right out of a Michael Bay film at every turn. Do you want to race straight through a destructive tornado? How about underneath the legs of two giant yetis fighting for dominance? Perhaps a herd of dinosaurs roaming through the streets of LA is more up your alley. If you’re looking to make things even wilder, you can play as an attack helicopter driving around on its landing gear, a full-length fire engine, and even an alien UFO. There is no shortage of spectacle in Cruis’n Blast, and it feels like every new thing the game introduced was an attempt to one-up whatever I had seen last.

Gameplay in Cruis’n Blast is relatively simple and to the point with your only objective being to go fast. Racing staples like drifting and nitro boosts are in alongside wheelie tricks that you can use at the start of a jump in order to pull off an aerial flip, gaining an additional burst of speed. If you’re trailing closely behind an opponent you can also do a wheelie trick as you ram into them, using them as a boost ramp to launch yourself into the air. There aren’t any special gimmicks or items that you need to worry about along the way, you simply have to use skillful driving to out-speed the competition. 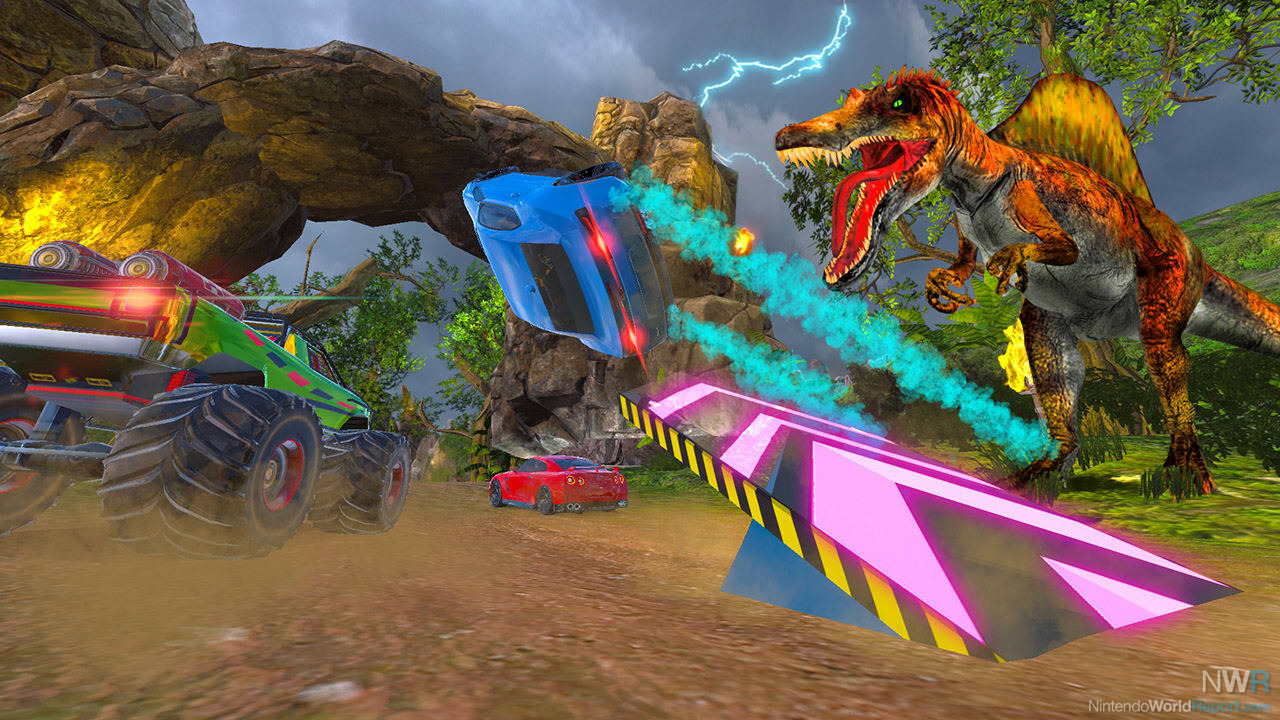 And use skillful driving you shall, since Cruis’n Blast is relatively demanding if you want to get your money’s worth out of the game. There are 24 races across the game’s 6 cups (in addition to the five original arcade tracks), though if you exclude the re-used tracks that mainly have aesthetic differences the actual number is around half of that. London’s track is reused three times as the conflict switches between the chaotic collapse of the London Eye to a raging storm, finishing on an alien invasion. If you’re here for a wide variety of tracks and really only want to play each one once, then unfortunately Cruis’n Blast isn’t going to have a lot to offer you.

If you’d like to replay races and try to get a bit better every time, then Cruis’n Blast is going to have plenty for you. The game is already relatively challenging on Normal difficulty, requiring you to take gold medals in each cup in order to unlock more. On Hard and Extreme difficulty, you’ll be pushed to your limits with very little room for error as you use every trick, drift, and boost to its full potential.

On top of this challenge, a progression system that allows each car to level up and unlock new cosmetics also adds reason to replay tracks. Each race nets you experience points for leveling and cash for purchasing new cars. New cars can also be added to the shop through collectible keys found throughout the game. There are three keys hidden in every track, and finding them all requires a pretty thorough search through every nook and cranny. It’s not exactly a wealth of unique and compelling content, but if you’re in it for the intrinsic value of getting better and squeezing as much playtime as you possibly can out of the game, there’s more than enough to do. 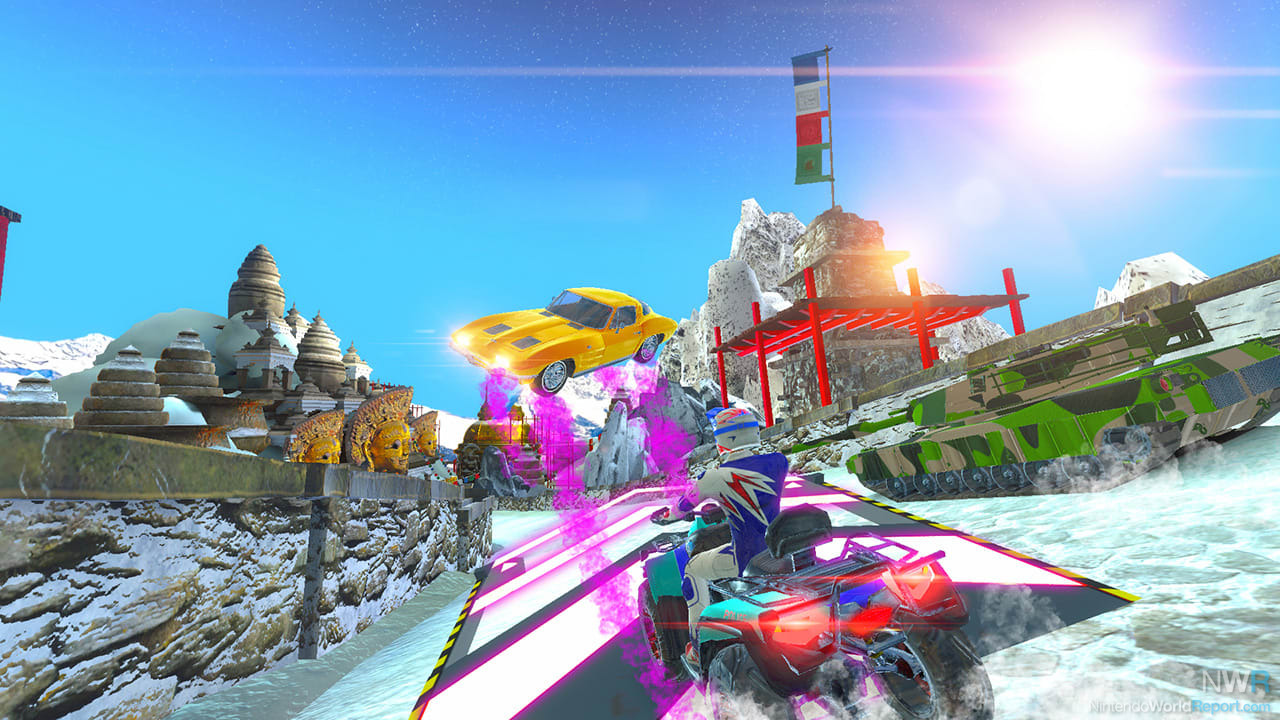 The biggest missed opportunity of Cruis’n Blast is that there is no online functionality whatsoever. Not only are you unable to race other players online (which would’ve been a nice substitute for typical arcade multiplayer), but there isn’t even an online leaderboard to compare your best time trials. It seems like a huge waste, especially when so much of the game is already geared towards those looking to get the absolute maximum out of their racing ability, and it unfortunately limits the enjoyment you can get out of the game purely to surpassing your own best times rather than the times of others.

There’s no doubt that Cruis’n Blast is going to serve a relatively niche audience, but that isn’t necessarily a bad thing. The sheer spectacle on display combined with vast opportunity for technical skill makes for an incredibly engaging arcade racing game that focuses on letting the player have pure, unfiltered fun. It’s a shame that there isn’t any form of online functionality to provide a little extra meaning to the experience, since that little extra motivation could’ve elevated Cruis’n Blast from a good game to a great game.

I bought it and am happy to have it in my collection (I don’t sell or trade in my games).

I was prepared for another half-baked Cruis’n port since I lived through the N64 era and still have a soft spot for these arcade racers anyway. To my surprise, this title was developed by the same folks responsible for the arcade version. They became an official Switch developer during COVID and spent their time cranking away on this port while the arcades were largely closed. Really thankful they did because we finally have a Cruis’n home experience comparable to the arcade original.

I don't normally care that much about racing games. For instance, I've never cared about stuff like Ridge Racer or Gran Turismo. Usually just stick with Mario Kart and maybe something like F-Zero GX or Sonic & All-Stars Racing Transformed might catch my eye and give me a different racing addiction away from MK.

However, Cruis'n Blast is the first time in a long time where a trailer for a racing game got me hyped up. The more I've seen and heard about Cruis'n Blast the more it seems to keep matching that hype. While not quite an instant buy for me, it is something I do plan to purchase now a bit down the road. It's pretty rare for a racing game to be a wanted title for me but Blast has accomplished that.

It’s not published by Nintendo, so a price drop is inevitable. I’m happy to have it now, but I think $20-25 sale price in the future is likely.

Yep, I'm thinking that's what could happen. With Metroid Dread and Mario Party Superstars next month, it's another reason why I want to wait a bit before purchasing Cruis'n Blast.

Do you want to race straight through a destructive tornado? How about underneath the legs of two giant yetis fighting for dominance? Perhaps a herd of dinosaurs roaming through the streets of LA is more up your alley. If you’re looking to make things even wilder, you can play as an attack helicopter driving around on its landing gear, a full-length fire engine, and even an alien UFO.