Certainly not the review I thought I'd be writing.

I feel like I'd done enough of these Review FAQs that an explainer paragraph probably isn't necessary, but just in case you're unfamiliar with the format, here's an example. I generally fall back on the Review FAQ format when I'm having trouble putting together a more traditional review, as was the case here.

Hey Zach, you seem down; what’s up?

Yeah man, the last couple days have been rough. I’ve been revisiting a game I remembering enjoying—more or less—back in 2011 and finding that now, in 2021, I’m not having a good time with.

Well that’s no good, what is it?

BloodRayne: Betrayal, which has been re-released on modern systems with some new features as BloodRyane Betrayal: Fresh Bites.

Is that the game with the sexy dhampir with scythes on her arms?

So you’re telling me that a half-dressed vampire girl slicing monsters to pieces isn’t winning you over?

Wow, this must be serious. First, though, I don’t really remember that game. Explain…as you would a child.

Here’s the elevator pitch: Betrayal is a 2D character action game in which BloodRayne travels through fairly large levels, slicing up monsters as she encounters them (which is often) and then traversing platforming obstacle courses in between combat encounters.

Okay that all sounds perfectly fine.

It does, doesn’t it? And in fact, Rayne’s combat prowess is not one of my issues with the game. To the contrary, she shines in battle, with a surprising number of flashy attacks, a dash, and the ability to both suck the blood of her enemies (to gain health) or infect and weaponize them against other baddies. She also has a giant pistol and, later, a badass heat ray. 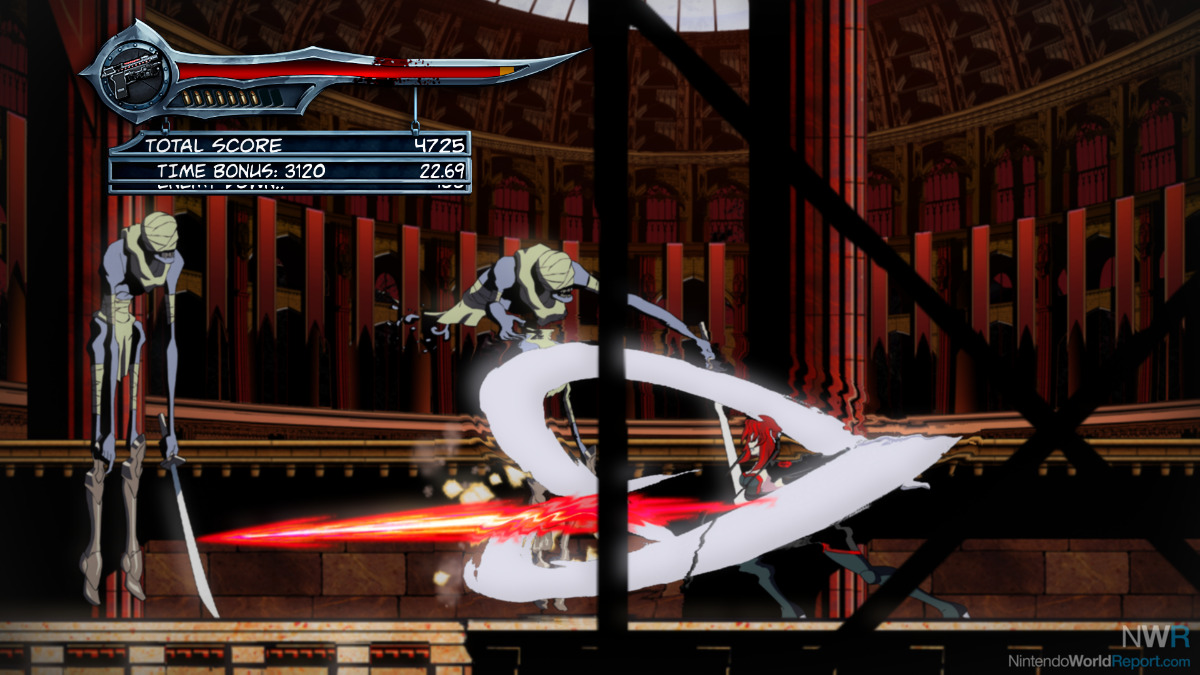 So the combat is good?

It is, although it gets a little bit rote at times. There’s a points-based system where you’re rewarded for decimating your foes quickly and stylishly. You can mostly ignore this, because it seems like you have to be unreasonably good at this game to hit even the most generous time bonuses. Encounters often just wind up feeling like kill rooms that go on just a little too long, with several rounds of enemies appearing in every fight.

Do they ever shake up the formula?

Sometimes you’ll have environmental hazards to deal with, like a saw blade overhead, toxic sludge around you, or cannonballs being shot your way. Usually, you can use these things to your advantage, which is cool. The combat is never boring, though, and when you really get into the groove, it’s a joy.

Okay, so combat is fine but maybe gets a little boring. How’s the platforming?

In a word, terrible.

It’s like WayForward knew that the game couldn’t just be eight hours of killing monsters—which is true—so they tried to take Rayne’s combat moveset and apply it to platforming sequences that become increasingly demanding. The problem is that the controls are just a little too loose for what they want you to do.

Maybe give me an example?

There’s a sequence towards the middle of the game where Rayne has to outrun a giant buzzsaw while jumping and dashing between platforms that decrease in size as she goes, and some of them move, and there’s instant-death toxic sludge beneath her. The controls aren’t as precise as they need to be, though, so you wind up under or over-shooting the platforms, or dash at the wrong time, or accidentally fall after you’ve landed because you think she’s not fully on the platform. 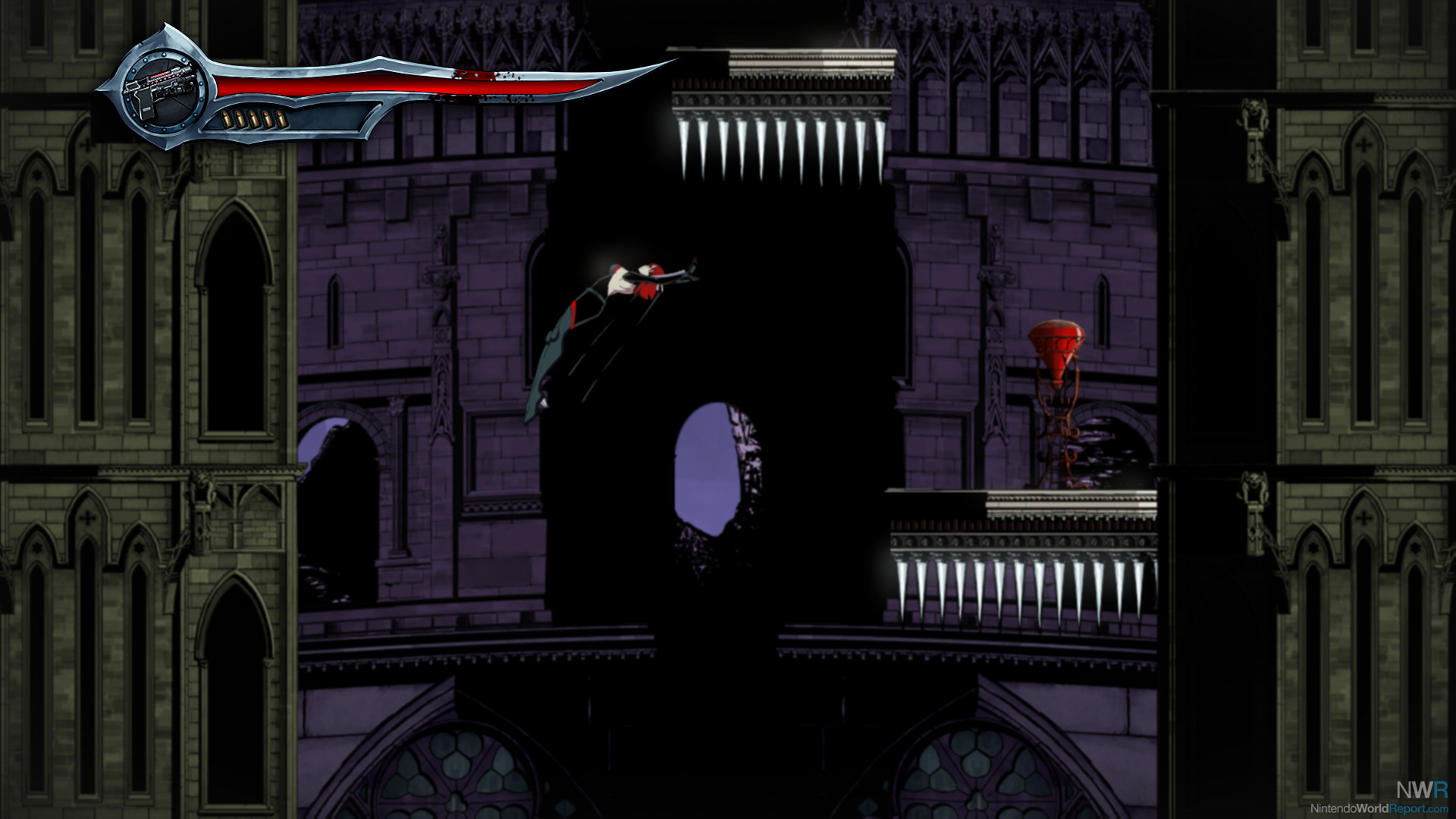 Or another time where, in the final level, Rayne has to bounce across toxic sludge by air-kicking floating insects that are a set distance apart, oh but also there are laser beams that will shoot between bugs, so she has to jump, attack, bounce up, dash to avoid the laser, hit the next bug right on the money, bounce up, dash to avoid the laser, etc. All this might be perfectly serviceable except that Rayne is in shadow, as are all foreground elements, but instead of the background being white or light red—you know, colors where you could still see the foreground—it’s an image of dancing flames, which is both too dark and too motion-heavy to adequately see anything in the foreground (which, as a reminder, is black). It’s terrible level design.

Neither of those sounds fun, especially the second one. What’s going on in the final level?

Yeah so the final level is basically Rayne escaping the castle (spoilers?)—the foreground and all the characters are black, the background is also black apart from the dancing flames, and the camera is tilting left and right. And you’re expected to perform acrobatic platforming sequences and lots of combat encounters where enemies overlap, or blend in with the back/foreground. I got through it, and the second half of that level isn't nearly as egregious, but good lord that first half. 28-year-old Zach might have powered through something like that out of some sense of pride, but 38-year-old Zach accepts that bad decisions were made in that final level.

If there’s a persistent platforming theme, are there collectibles?

There are—“treasure” boxes that are rather superfluous and only exist to boost your score, and Red Skulls. Most levels have at least a couple Red Skulls, and collecting four or five lets you improve your health total or pistol ammo total. Several of the Red Skulls are in places where you only have one shot to get them per level (or you can try dying and restarting from the checkpoint). More health and ammo certainly helps, but won’t really relieve your frustration during demanding platforming sequences.

So what’s new about this Fresh Bites version apart from being on modern consoles?

They’ve brought in Laura Bailey and Troy Baker as Rayne and Kagan, respectively, the original voice actors for those characters (on the PS2 games), which is cool. They’ve also re-balanced the difficulty from the original, which was nearly masochistic at times, but I think this change mostly applies to the combat encounters and how much damage Rayne takes/does. And it's something you can turn off on the stage select screen--although I don't know why you would. But for the platforming, even if they did pull back on the throttle somehow, 38-year-old Zach is not as spry or as patient as 28-year-old Zach.

Beating the game unlocks an art gallery, which is...fine. 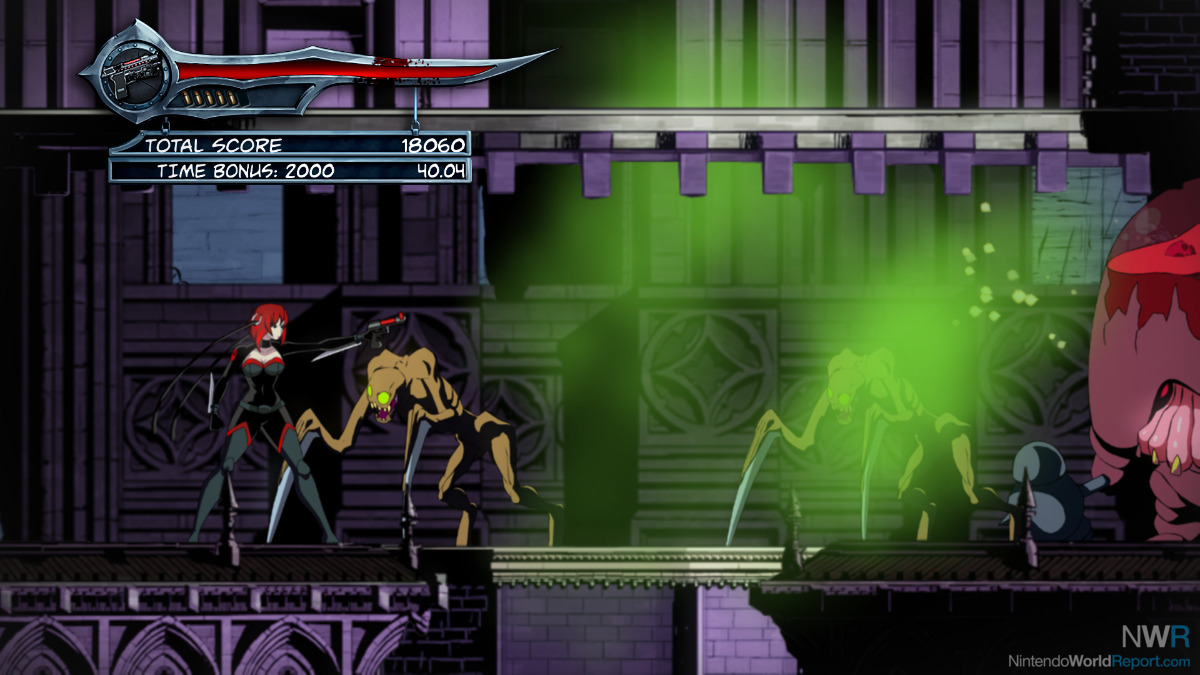 You know, we didn’t really talk about the game’s art or music.

As you know, Disembodied Voice, I’m a sucker for 2D, hand-drawn art. And Betrayal does, in fact, look pretty great. Few studios are as good at this as WayForward is. Rayne’s animation is fabulous and I absolutely adore her respawn pose and the way she kicks the door off her transport coffin if you press Y when she lands at the start of a stage. Her combat animation is over the top and great fun to watch, although I rarely had time to appreciate it during fights. Enemies are a little less animate, but still full of personality. I was a bit disappointed by the dearth of distinct enemy types. If I never see another blue-coated vampire dude again, it’ll be too soon. The bosses, though, are fantastic—especially the towering, hard-rocking demon who caps off the game (before the terrible escape level, that is).

Jake “Virt” Kaufman did the music, so it’s already excellent, but he also provides a nice gothic-sounding soundtrack that’s distinct from his familiar Shantae or Mighty Switch Force tunes.

After you get into the castle, levels all tend to look pretty similar, and the game doesn’t always do a good job of telling you where you can and can’t land or wall-jump. In terms of design, you’ll be utilizing Rayne’s high-rising backflip for a surprising number of jumps that could’ve just be solved with a slightly-higher normal jump or a short secondary jump, a la Rachet & Clank or the old God of War games.

Hey, did you play that new God of War game?

Well, it’s not a God of War game so I didn’t really like it.

Anyway, Rayne herself is more covered-up than her previous incarnations which is probably easier to animate but—because you’re talking to me—a little disappointing. I always preferred her BloodRayne 2 outfit because, again, it’s me.

I did not. I mean, look, I’m a big fan of tough-as-nails platformers. My adoration for Super Meat Boy (but not its sequel), Hollow Knight, and The End is Nigh is well-documented. But the reason those games work so well is because the precision platforming is designed hand-in-hand with the protagonist’s moveset, and you very quickly develop a sense for that moveset and exactly what he or she can or can’t do. Here, it seems like WayForward tried to apply Rayne’s existing combat repertoire to platforming challenges, which absolutely doesn’t fly. The inconsistency with which her wall-jump can be deployed is a testament to this—it seems tacked-on, incorporated to justify some of the platforming segments and superficial exploration without really taking advantage of it.

The combat is generally enjoyable, but the scoring system is never explained and appears to require superhuman skill (or far more practice than I’m willing to entertain) to get good grades in. The platforming is generally miserable. The bosses are a lot of fun, though. Betrayal looks and sounds great. More often than not, though, it feels like work. Tedious, exhausting work. And 38-year-old Zach doesn’t have the patience for that anymore.

That's a disappointment.  I had heard that this Bloodrayne game was one of the Shovel Knight team's last games before they broke off from Way Forward.