When I was a lad of 17, I was introduced to a PC game called Grand Theft Auto, an overhead romp of violence and larceny that punched its way into the hearts of millions of Gamers, while also drawing the ire of parents and censors alike the world over. The title would spawn many clones and copycats as well as multiple sequels of its own, thus reshaping the landscape of video games. Over the years, the series evolved into a 3D, hi-resolution cacophony of love making and carnage, culminating in the current online frag fest that has become GTA Online. Now, nearly 24 years later, Jutsu Games is returning to this idea with a back to basics approach. In describing their top-down 2D game Rustler, the developer quotes: “Classic GTA-gameplay gets a medieval makeover.” Yes, this is Grand Pilfer Equestrian.

You start out as a medieval dude named Guy, who wakes up mid-morning from a drunken haze. Your opening mission\tutorial is a fist fight with an angry pedestrian who has taken umbrage with you for placing a cow on his roof. After the initial fisticuffs, you head on over to your employer in all of your hungover glory and are given your first job of the day: steal a horse. Once the horse is procured, you have to head on over to the body sho… err, horse re-outfitting barn to throw off the law-enforcing knights who would be on the lookout for the stolen beast. Things only become more shady from there as you are eventually enticed to raise money to illegally participate in a knight’s tournament to win the hand of a fair maiden. To this end, you will “horsejack” ordinary citizens, execute local ruffians, assassinate knights, bully people to attend church mass, and then extort the tithe out of them in this overhead action-adventure. 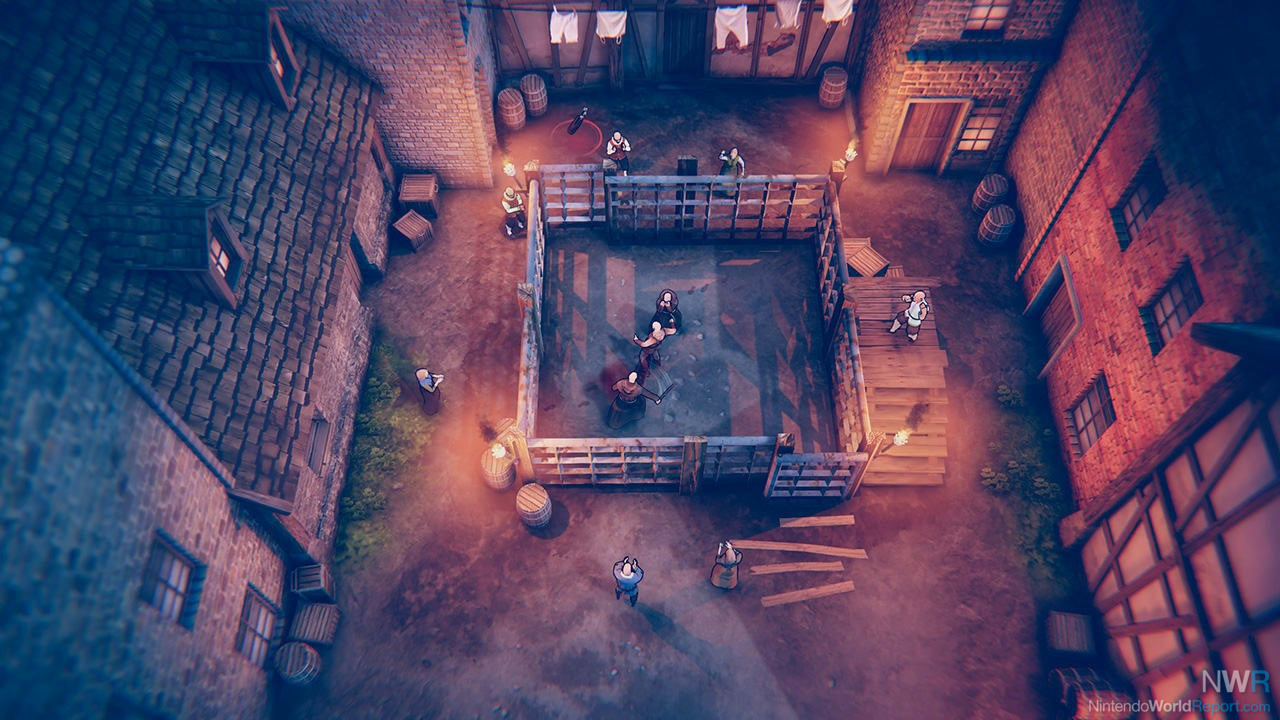 Rustler is definitely not a game that takes itself too seriously, as several blatant anachronisms are strewn about the kingdom in the form of wall graffiti, red and blue strobing police knights, and beat boxing bards for hire. Also, some of the dialog and slang would feel at home in a game that takes place in the 1980s rather than the 1480s, especially with all of the Monty Python references. Even the game’s soundtrack is fairly modern for a Ye Olde knight in the kingdom slums atmosphere, but that doesn’t detract from the experience. All of this plays out to an amusing juxtapositional atmosphere that clearly highlights the game’s objective in offering a homage\parody of the GTA series.

Rustler’s graphics are pretty darn good, vastly improving on the source material. The lighting is of special note as shadows are cast fairly accurately for everything and the cobblestone detail of the town that surrounds the castle grounds is nicely rendered. Sound and design work together very well here; traffic noise of horseshoes clopping their way down the street also fills the air to good effect. Standing on the corner of a random street gives you a sense of a bustling town. Horse and carriage lanes are well traveled by horse riders transporting goods, people are tossing human waste out of their windows, sidewalks are populated with sneezing and coughing pedestrians probably dying of consumption, and the bricked corridors are, for some reason, filled with the echoed ravings of some tortured soul probably being crushed to death in an Iron Maiden (EXCELLENT! *Air guitar*). 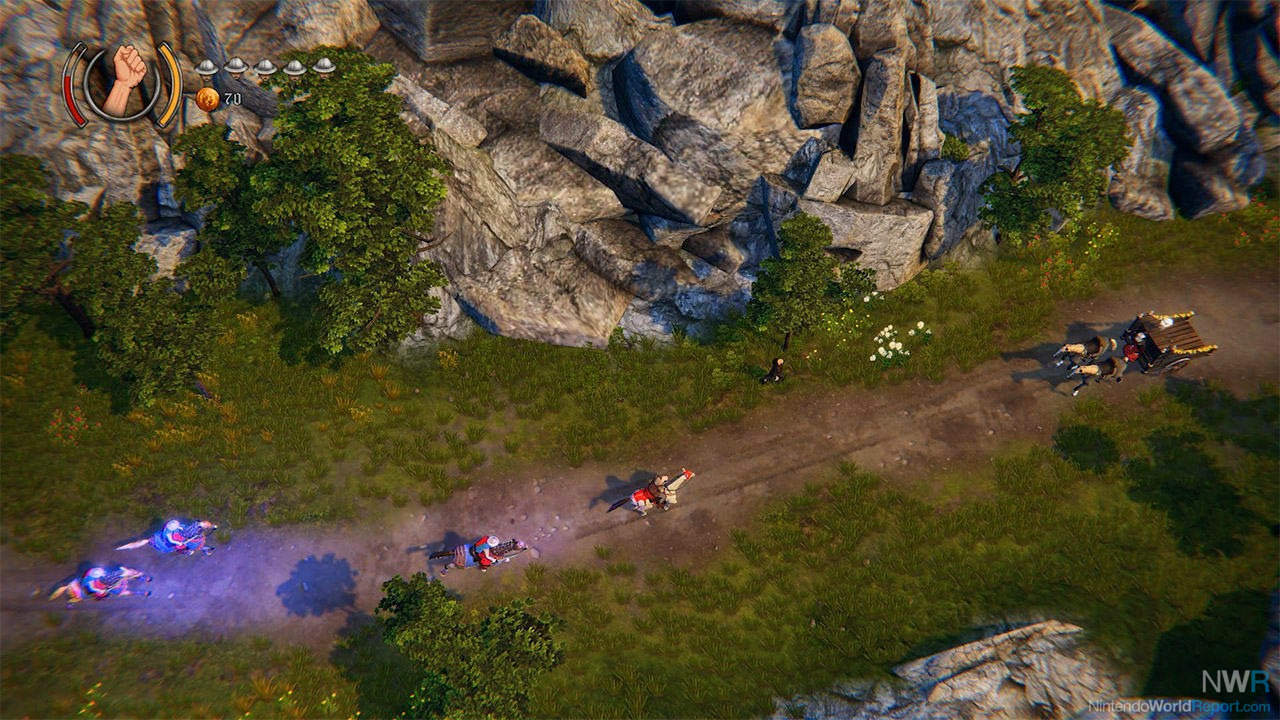 Rustler plays like GTA1 and 2 almost to a tee. There is a simple control scheme for attacking, switching weapons, mounting a horse, dash/flipping, and running. However, you have a stamina bar that is depleted by some of these actions. What isn’t like the original GTA is that, as you complete missions and gain experience, you gain skill points that can be applied to a skill tree. The skill tree is pretty easy to understand as there are four columns of skill types: close combat, ranged combat, horse riding, and social skills. These upgraded skills make missions and causing a general ruckus much easier. There are also some environmental interactions unique to this medieval setting, like the ability to grab and toss the aforementioned human waste at pursuing law enforcement to slow them down. The difficulty depends on how much chaos you create. If you are not careful during a mission, you could wind up with 10 difficult-to-shake horseback knights chasing you all along the watchtowers. Luckily, if you hit a mission point while they are in pursuit, they drop all interest and disappear.

Taking a tried and true formula and putting its own spin on it, Rustler makes for a fun and rejuvenated experience. Its anachronistic irreverence keeps it in the spirit of the source with “maximum ridiculosity.” Like the original GTA experience, however, it's not perfect. Overly aggressive AI and somewhat repetitive fetch missions can make the game feel like a slog at times. It can be more fun to ditch the mission at hand and just don the Grim Reaper outfit, scaring farmers across the countryside and attempting to reap souls. It would be even more fun to be able to torture the serfs and peasants with a friend but alas this is a single-player title. Rustler is certainly an enjoyable nostalgic trip back in time for those who are old enough to remember it. Many younger gamers of the Halo and Fornite generation may not be able to appreciate it, but they won’t know what they are missing out on.