They made a veritable Dodgeball RPG Story.

Dodgeball historically feels like an underserved activity in video games. I have fond memories of Super Dodge Ball on the NES, but outside of that game’s sequels and the underrated indie game Stikbold, dodgeball hasn’t been that prevalent in gaming, at least until this year. EA and Velan Studios’ Knockout City brought dodgeball online, but Dodgeball Academia, published by Humble Games and developed by Pocket Trap, delivers the cartoony episodic anime RPG that I never knew the sport needed. It combines deep, strategic combat with charming characters and an incredible amount of polish to make a sports RPG that stands tall next to Golf Story and the fabled Game Boy Mario sports games.

Even beyond the sports facade, what makes Dodgeball Academia so good is that it’s just a killer RPG in and of itself. You star as tropey plucky protagonist Otto, a newcomer to the legendary academy. He puts together a dodgeball team and sets his sights at being the very best, like no one ever was. The game is broken into chapters, with the first one largely being a tutorial and the second chapter starting to unravel some of the regular rhythm of the game. Each of the eight chapters represents a day in the life at the academy. You explore the school grounds and surrounding areas to find treasures, fight random schoolkids, and complete story quests and side quests. Everything is extremely vibrant and intuitive. It is as enjoyable to look at the colorful animation and presentation as it is to easily use the in-game map and menus. The only snafus are that the load times are a little on the long side sometimes, but that sadly just seems unavoidable with the bulk of Switch versions at this point. (Note: if you do have an Xbox, it will be on Game Pass at launch) 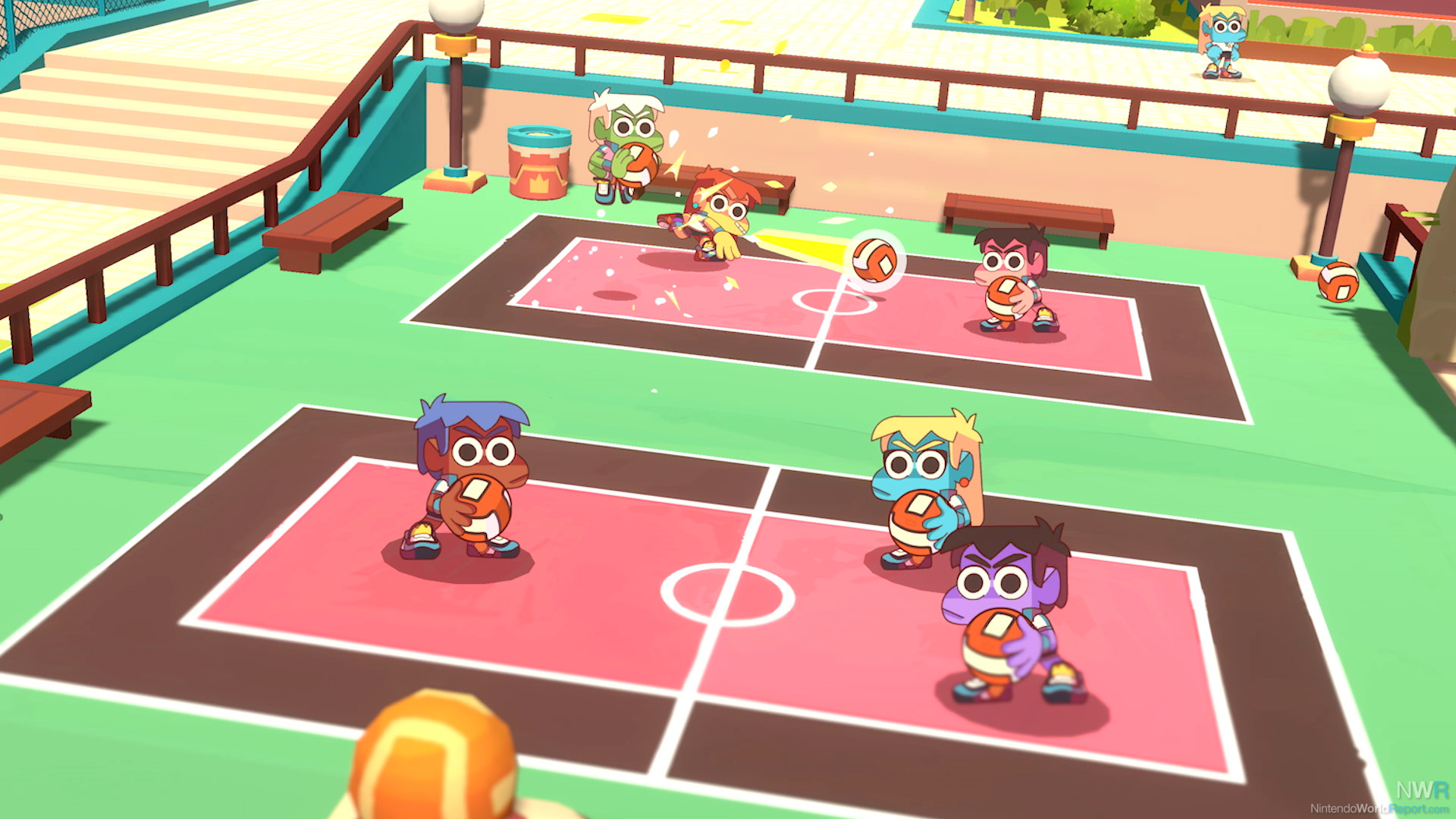 Otto’s focus is primarily on winning the dodgeball tournament, but numerous other mishaps and adventures add to the goofy lore of the land and help to expand Otto’s team. For the first three chapters, your team grows from one to two to three, the latter of which is the most players you can have on the court at one time. The dodgeball itself is the main gameplay, as every match is presented like an action RPG battle. You control one of up to three characters at a time, trying to throw balls at your opponents while avoiding being hit. Every character is unique, but they all control relatively the same. Everyone has a regular and charged throw. Everyone can catch or counter an enemy throw. They all have special moves. Every character also learns new moves and buffs as they level up and their stats can be altered by various equippable items. The character customization is flexible but never daunting. Finding new party members across the adventure turns out to be even more fun because a new character means new twists on previously explained mechanics.

Building on basic mechanics is what makes the dodgeball itself so engrossing. At first, you’ll just play on normal courts under normal conditions. From there, you’ll be dodging bullet-hell special moves, weaving to the side of vehicles accosting the court, and dealing with balls with fire and ice elemental powers. The steady pace of these tweaks and challenges helps to make sure the gameplay is never dull. Even over the course of a roughly 10-to-15-hour adventure, there is a consistent slate of new ideas, areas, and mechanics. All the while the basic concepts of throwing and catching are always the foundation. This is a game that never loses sight of its fundamental strengths even as it gets crazier. 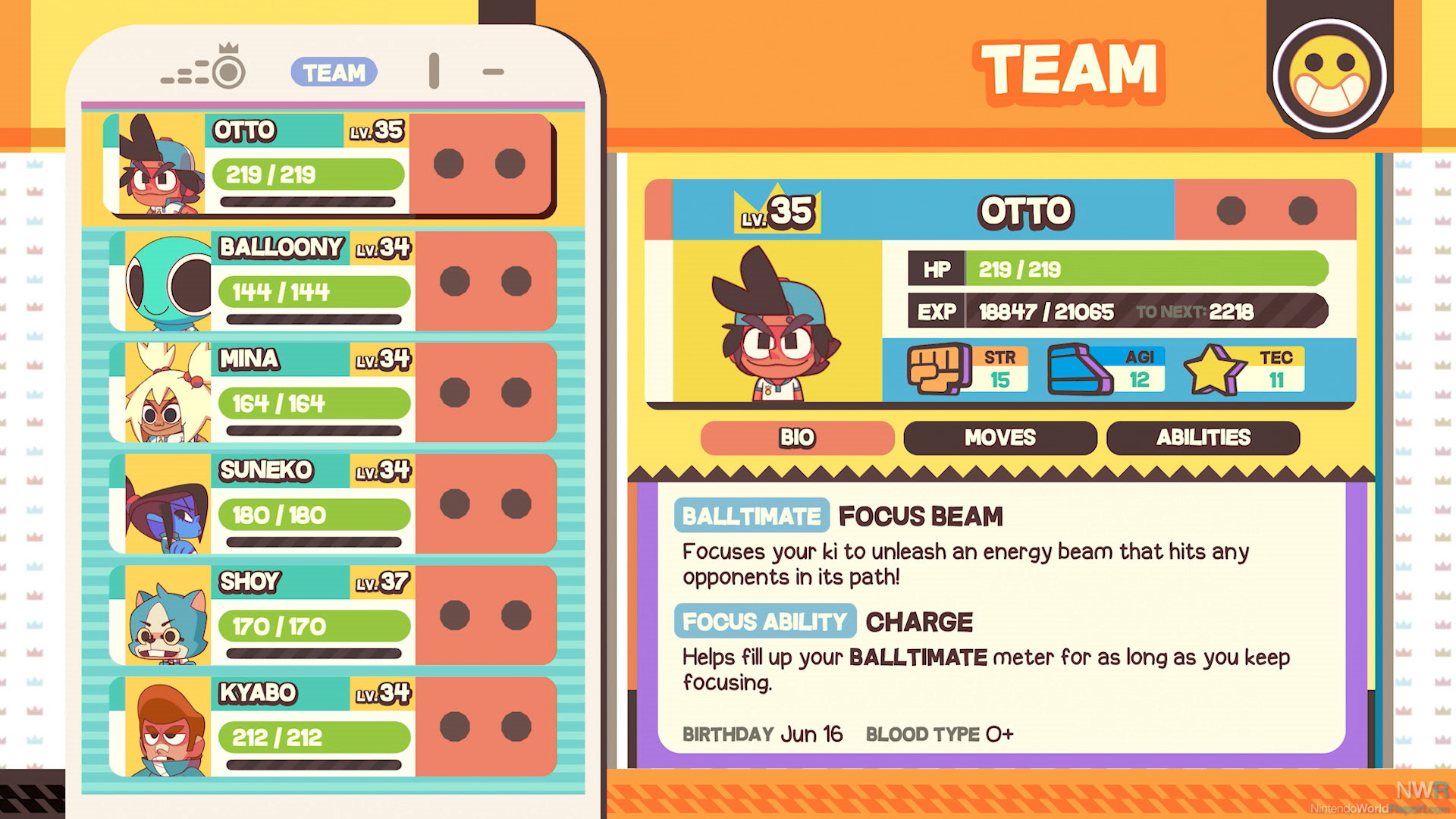 The narrative goes to some wild places, with the school itself being a source of great intrigue. Every character is absurd and larger than life and thanks to humorous writing and gorgeous artwork, a lot of them stand out. It’s very referential, most evident to me in how a lot of the non-story battles feel a lot like Pokemon trainer battles, down to the way they run over to you if you get in their line of sight and even the musical stinger when you enter the battle. The way everything comes together, from the animation to the soundtrack to the gameplay, is outrageously charming.

In addition to the story mode, there is also a two-player local multiplayer mode. It’s not quite as deep as the rest of the game, but it’s a totally fine addition. I don’t see myself spending a ton of time here, but in the right environment, I could see this being a competitive couch multiplayer game.

The best part of Dodgeball Academia though is when everything clicks as an RPG. It’s a joy to figure out the right strategy to win a tough fight. I love exploring the world and seeing what happens next in the goofy story. This isn’t just a great sports game, it’s also a superb RPG that, like the likes of Golf Story, should appeal to those who aren’t inclined to sport.