The Gran Turismo of overlanding, maybe.

I consider myself to be a video game and car enthusiast, and it's a wonderful thing when those two worlds collide. Series like Gran Turismo, Project Cars, and Assetto Corsa have been a boon to the modern petrol head, but what if you craved something a little less urban? I dove into SnowRunner with a double whammy. I have never played any form of truck sim nor did I expect to find one since I went into this review completely blind. I expected Snow Runners to be something like Big Mutha Truckers or Monster Truck Madness, but I was way off.

SnowRunner puts you in the seat of something with 4-wheel drive, gives you a little direction as to your goal, and sends you off you into the wild woodlands of yonder. In career mode, you start in a Chevy Avalanche, looking to deliver goods to repair a bridge somewhere in northern Michigan. Your first job is to find a tower to reveal more of the map (is that you Ubisoft?) so you can see what resources you have. Your vehicle starts with the parking brake on in some soft dirt in rear wheel drive mode. First things first: you must release the parking brake manually, then you apply some foot to the throttle. It will become apparent that your car is struggling just a bit with the terrain. At this point, the game advises you to manually shift into All Wheel drive and low gear. Once that part of the tutorial is done, you can mark your map to the tower and follow the path. The starting Michigan area will throw lots of challenges in your path such as blocked roads, trails that have rivers running through them and dirt that becomes mud, which will force you to manually engage the differential lock. 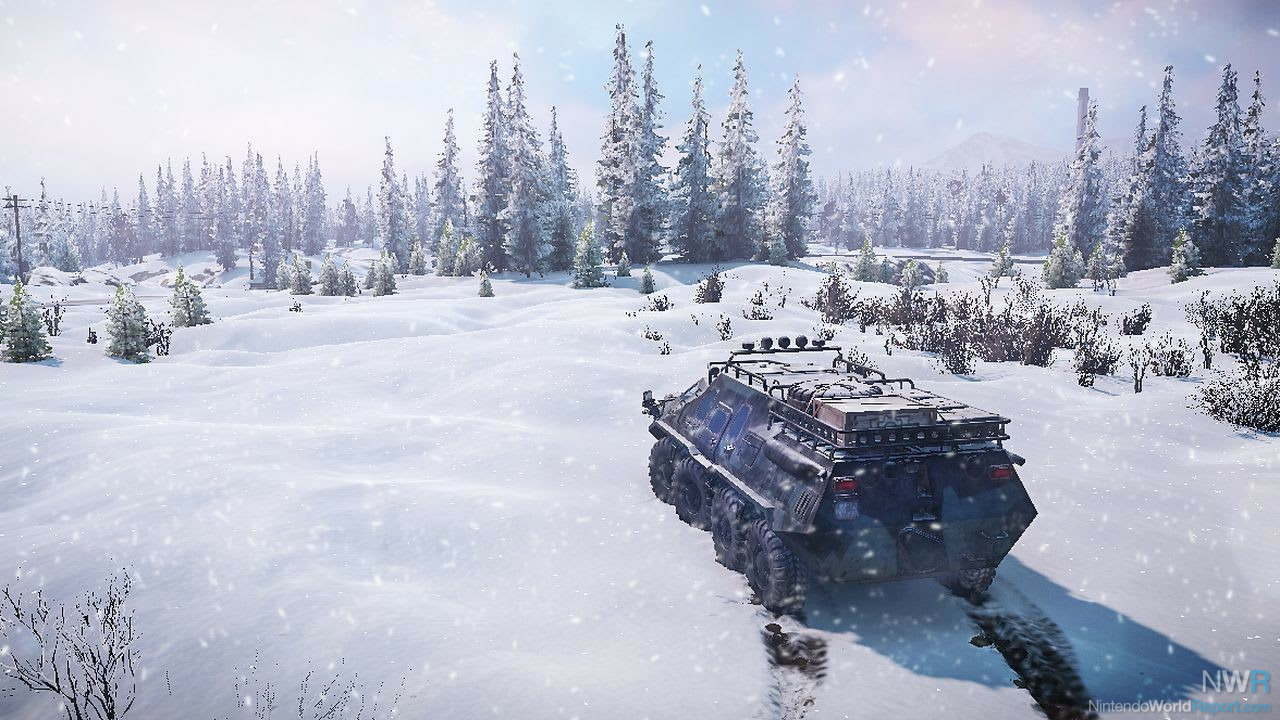 These challenges will slow you down and probably stop you completely. I learned quickly that this isn't a game that you power through with any sort of real speed; the terrain won’t allow it. It is far too easy to become stuck in the mud or river requiring you to attach a winch to the nearest tree and pull yourself out. Fortunately, the physics are done very well for this laborious setting. The trucks will fishtail on slippery surfaces, and the controls reflect the heft of each vehicle. Applying throttle in regular gear only results in wheel spin when entrenched in muck; it's only when you shift to low gear that your truck can gain traction. Given these facts, you are required to be patient and thoughtful as to how you approach each obstacle. If your car takes too much damage and you fail a mission, you are pretty much stuck until you reset the stage. You better get used to restarting stages as trial and error is a huge part of SnowRunner.

Speaking of error, I spent more time stuck in the mud than a three-legged pig. I used the winch so many times that I felt like I was trapped in an ambitious but rubbish episode of Top Gear. It is so easy to get stuck in the mud if you are not paying attention, just like in real life. That's where this game shines: the physics model and environment are very well thought out and feel solid. As the road changes, you can feel the grip under the truck change. If you stop in the mud, your vehicle will start to sink. The sounds from the trucks are convincing enough as are some of the sound effects from the surrounding environment, such as the rushing river water or the sound of rubber struggling for traction as you crawl through sand. 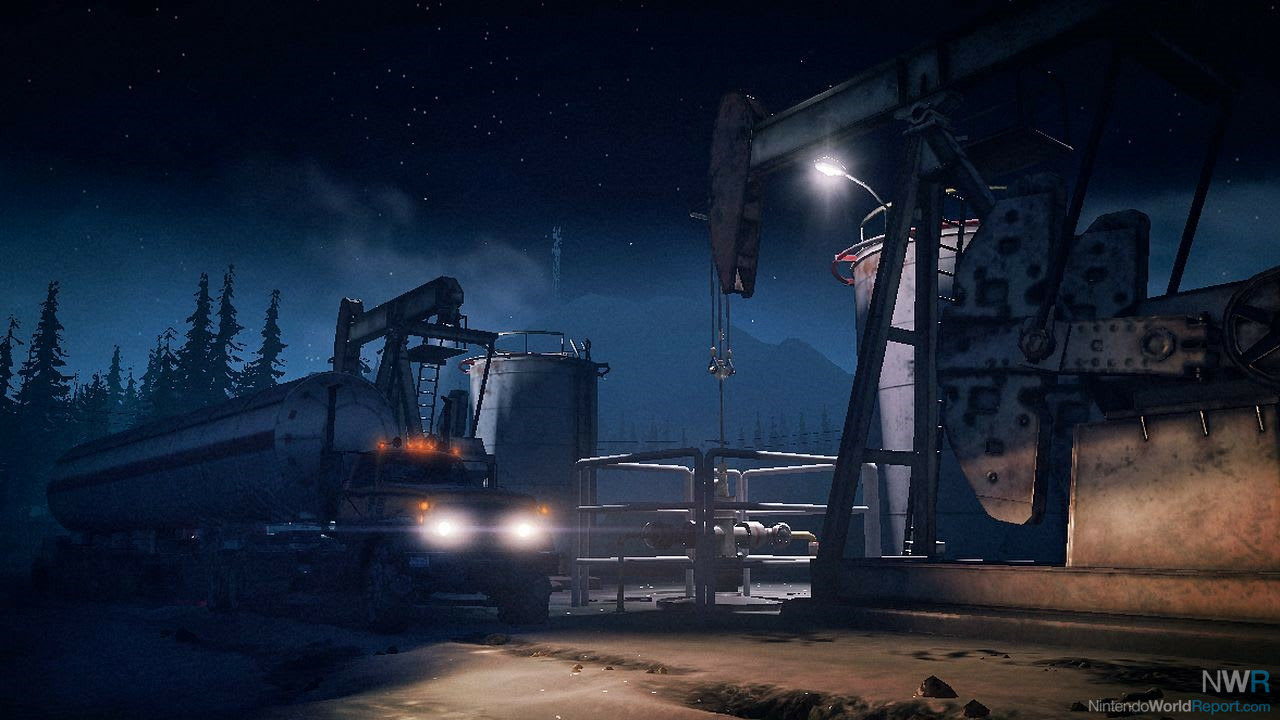 As time passes, the sun sets, making it a little more difficult to traverse the paths. You have to manually activate your headlights to see what's ahead. My problem was, it took a few minutes of wandering around in the dark before the game prompted me with the key combo to activate them. If you wade too deep into the water, your vehicle will stall and its game over. If you take a wrong approach angle, your vehicle will flip and flex its damage model muscle, also resulting in a game over. Choosing an end point on the map does not always highlight your path and only gives you a general direction. This game does not like to hold your hand.

Outside of the campaign mode is the challenge mode that places you in several scenarios with different objectives that range from traversing a swamp to finding your way through a forest with no map. No matter the mode, even on normal difficulty, this game is not for greenhorns or casual drivers. As the name implies, there is some snow to navigate through, as well as some rock crawling to be done, and none of it is simple. SnowRunner is as close to "The Real Truck Simulator" I have ever seen that doesn't include 18 wheels and an oversized trailer. From manually having to hitch short trailers and the option to manually load your cargo with a crane, this is an overlander enthusiast's dream. 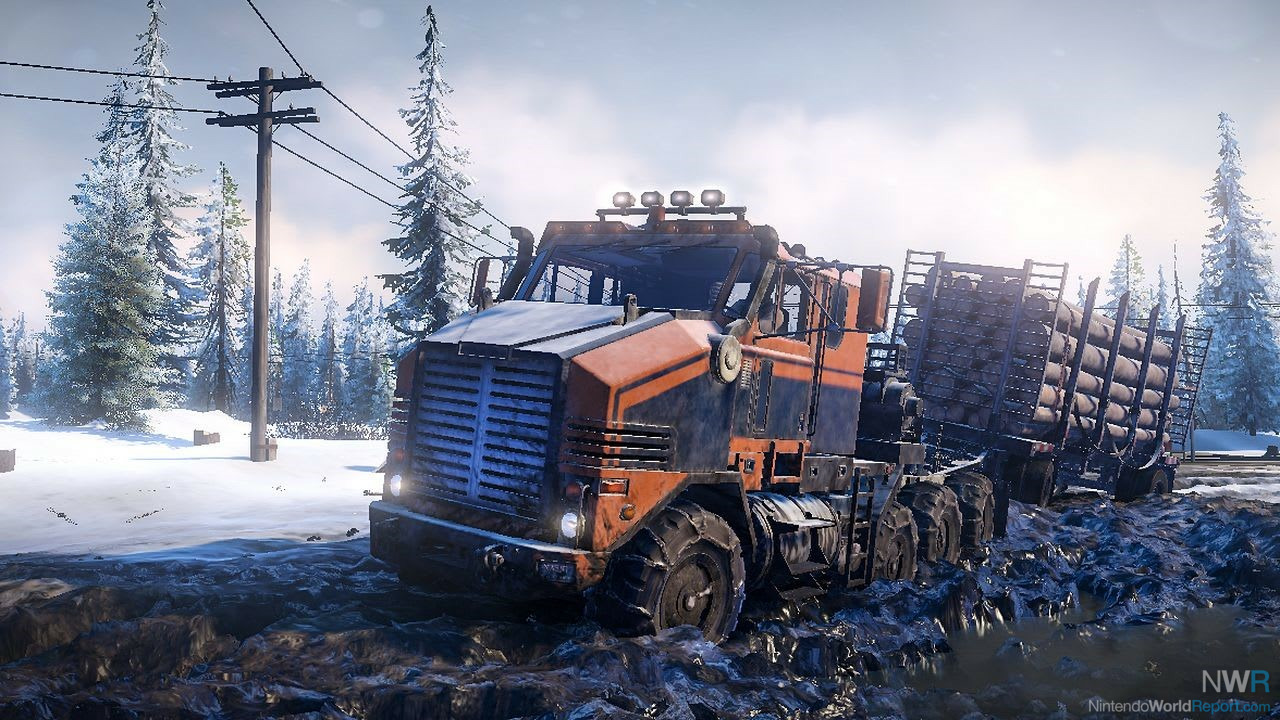 It's not perfect, thoug, as noticeable jank crops up from time to time. I have had bits of gate collapse near me that I had made no contact with. Heck, I could park next to a picket fence of a suburban house and honk the truck's horn to make it fall over. The objectives can be a little frustrating. For example, in the first career job, you have to get metal beams and wood to build a bridge. If you grab the wood before the metal and go to the bridge, it won't let you drop it off. The game makes you reset the mission and grab the metal first. Also, opting to rescue your car from being stuck puts you back at the beginning of the challenge. It's not so much a rescue option as it is a full reset without selecting restart, which is rather annoying.

Annoyances aside, SnowRunner is a great non-18-wheeler truck driving simulator. Its steep learning curve takes patience and determination to overcome. It’s clear that this game is aimed at a very specific clientele. If you like a good challenge and overlanding is your kind of thing, Snow Runners is for you. If you like to romp through the countryside at full tilt with little consequence to your vehicle, stick to Forza Horizon.