Nocturne begins with the end of the world, as Tokyo literally folds in on itself and humanity is decimated in an event called “the Conception”. Now demons roam the Earth and have replaced humans as the dominant species, building a new society in the ruins left behind. You play as the Demi-Fiend, one of the few survivors of the apocalypse who has been gifted the power of a demon. From there many questions are raised, such as why you were granted these powers and what happened to the humans who caused the Conception, and few answers are given for a long while. Nocturne’s narrative is more interested in selling you on the atmosphere rather than its plot; while there are eventually answers to these questions you won’t be getting them quickly.

Thankfully that atmosphere is incredibly compelling, as the demons that have replaced humanity wasted no time in setting up their own society with its own conflicts and troubles. The politics and mysteries of demon society are slowly revealed as you progress through the story, which lends a feeling of discovery and exploration to the backdrop of a very real and familiar city. Strange and unique sights like a sea monster guarding the exit to a hospital, a race of sewer people that have never seen money before, and a spanish skeleton that appears from thin air and inevitably punches you into the game over screen all do a fantastic job of feeding your curiosity, compelling you to want to see more as the story slowly drops more breadcrumbs about what’s going on behind the scenes.

If you’ve ever played a JRPG, you’ll probably be familiar with the structure of Nocturne’s gameplay outside of battle. You’ll explore the world and meet various people who will tell you their stories and give hints on where you’re supposed to go. This will lead you into areas that could be described as dungeons where you’ll have to navigate through a gauntlet of enemies to reach your goal. 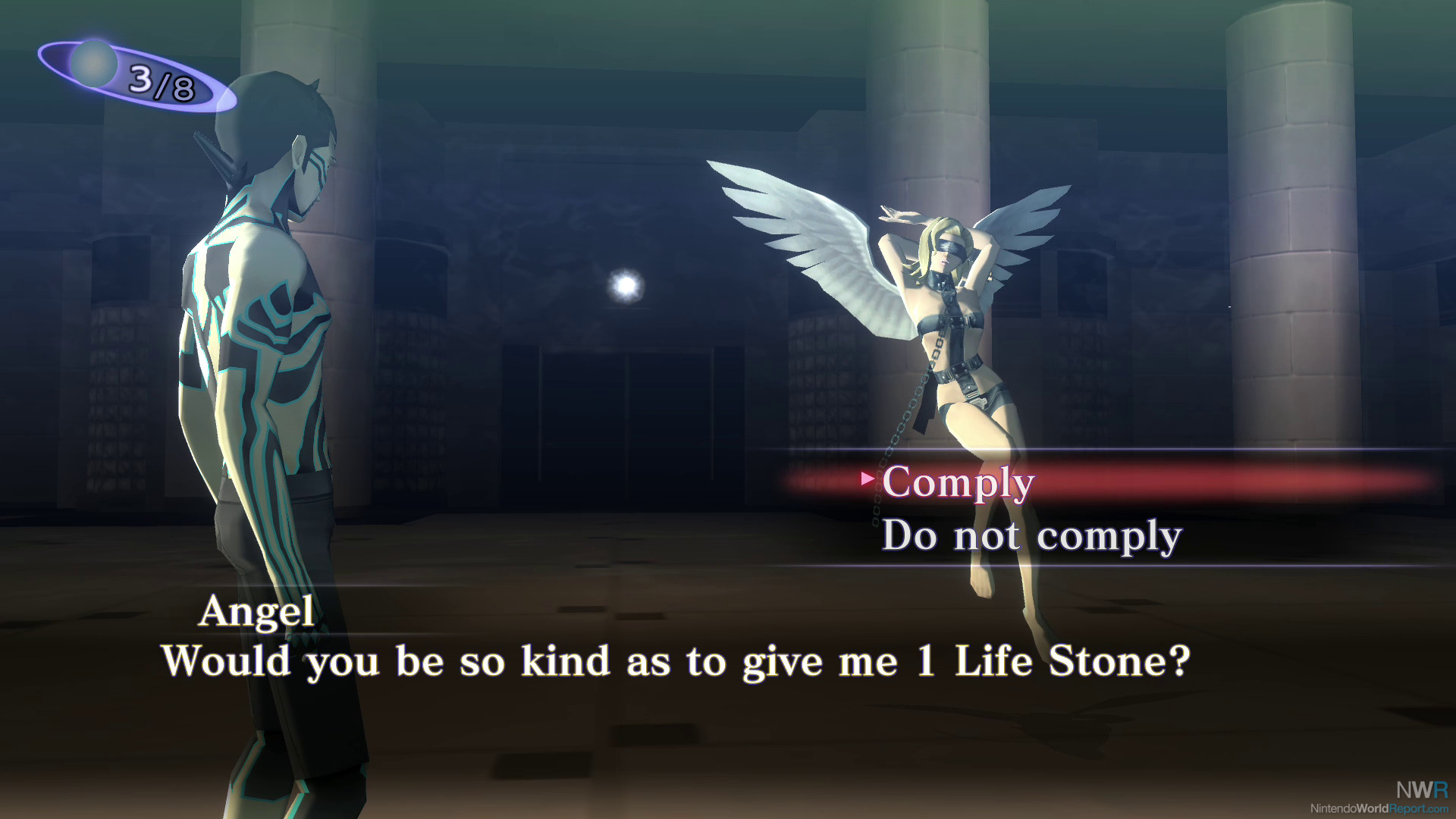 Progression in Nocturne is in line with many other classic JRPGs that were released in The Good Old Days™ when players weren’t given a firm direction on where exactly they were supposed to be going. You’ll need to pay close attention to what NPCs have to say about events occurring in the world, and since some hints are more cryptic than others you will occasionally need to do some exploring in order to stumble into the story. I rarely ran into a situation where I couldn’t at least come up with a good guess as to what I had to do next, but the rare time that I was completely stumped made me pretty thankful this game is old enough and popular enough to have some pretty comprehensive guides online.

Meanwhile Nocturne’s combat is what really sets it apart from other games of its era. The game features a complex system of elemental strengths and weaknesses that work in tandem with a unique turn order system that lets you control the flow of battle. Each action in your turn is kind of like a consumable resource represented by turn icons in the corner of the screen. At the start of your turn you’ll usually have as many turn icons as you do party members with each action consuming one turn icon. Once you’re out of turn icons, control passes to the enemy demons. Successfully hitting an enemy’s weakness will only consume half of a turn icon, so you can effectively double your number of actions before the enemy’s next turn. Poor outcomes such as missing an attack or hitting an enemy with an element that they’re strong against will instead double the number of turn icons consumed, returning control to the opponent faster. 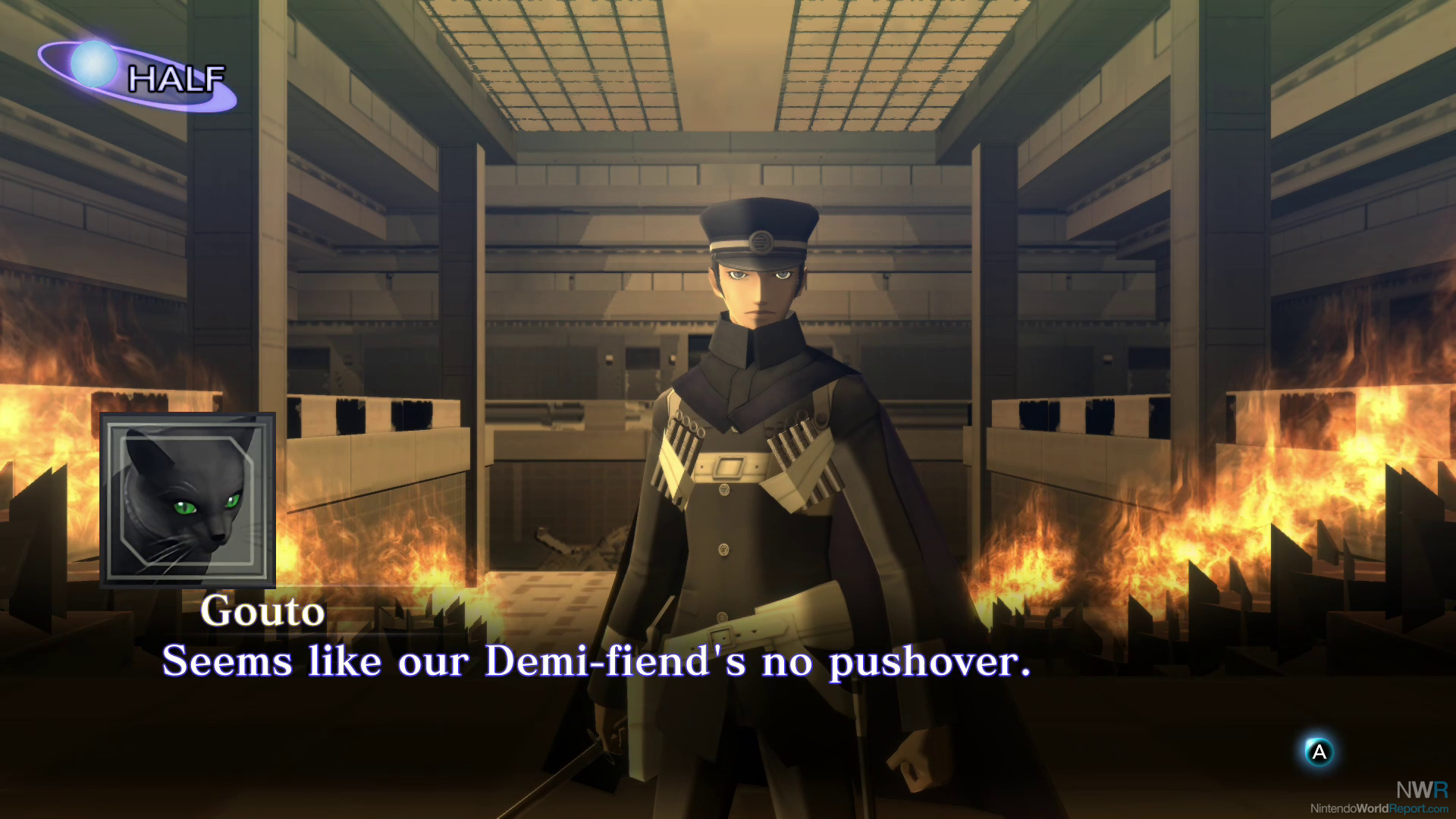 Enemy demons also play by the same rules with their own turn icons, so you’ll need to pay attention to your team’s strengths and weaknesses in order to get the most out of your turns while trying to prevent the opponent from getting the chance to steamroll you. There are a wide range of skills that you and your allied demons can learn in order to come up with varied strategies to take on any opponent. If you don’t have a solid team with a comprehensive plan then many of the game’s tougher fights will be over before they even start.

This sounds difficult and maybe a bit scary, but it’s one of Nocturne’s greatest strengths since it means that you’ll rarely have to mindlessly grind EXP in order to beat a boss by simply raising your level. Whenever I ran into an opponent that could hilariously curbstomp me I was almost always able to turn it around in a few attempts by just figuring out the right team of allies to mitigate its strengths and hammer in its weaknesses. However, that’s not to say you’ll never be grinding at all since the simple act of getting that team together can be easier said than done. 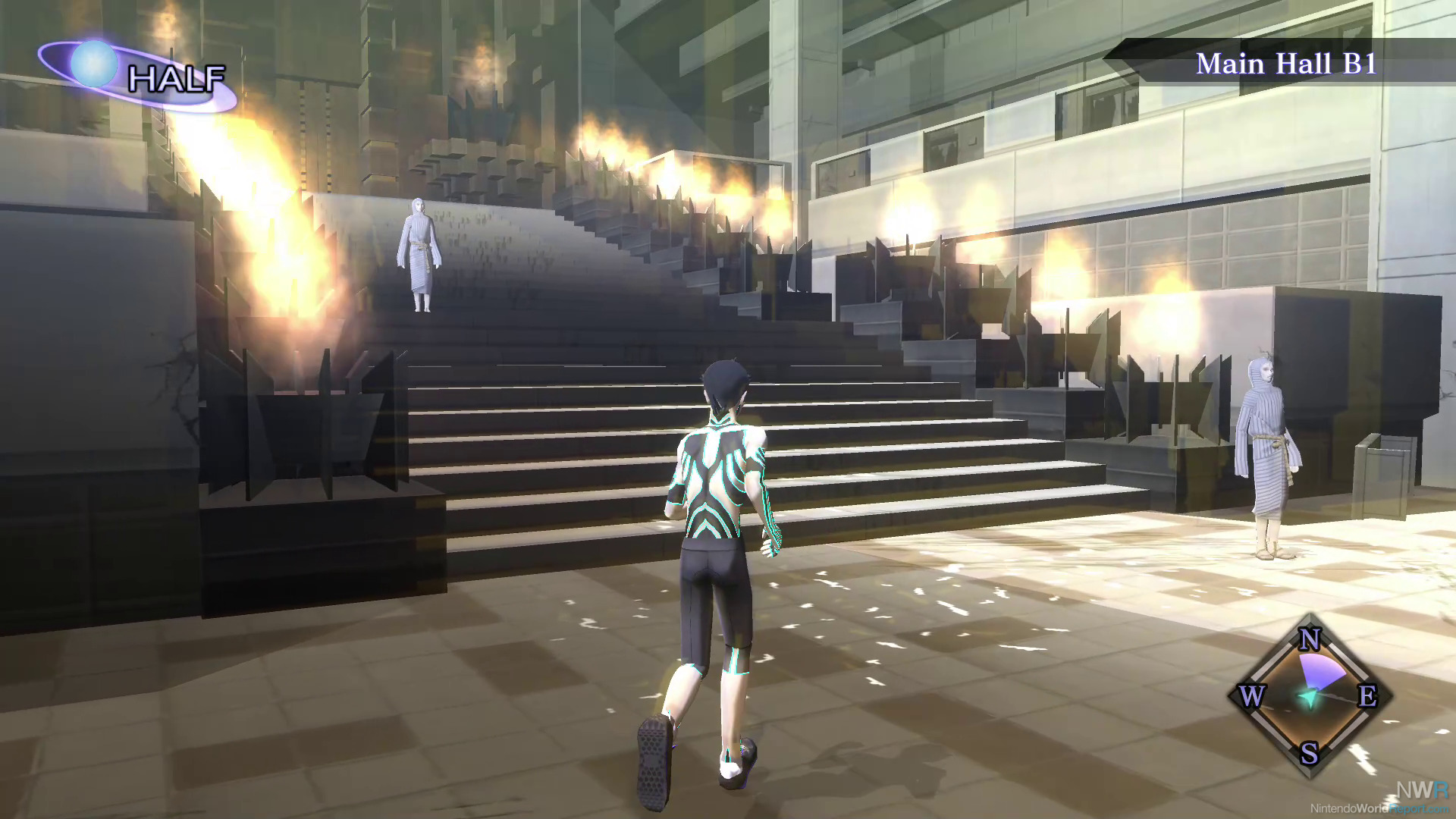 There are two ways to gain new demon allies to fight alongside you in battle. The first is through negotiation. During combat instead of attacking an opponent you can choose to talk to them in hopes to persuade them to join you. From here they’ll ask you to give them money or items and then maybe ask you a question about your personality. Unfortunately your chance of success in negotiation is more or less random; while there are some tried and true methods that can definitely make it more likely you’ll succeed (like only talking to the last enemy alive or only attempting negotiations during the full moon), every demon negotiation may as well come down to a coin flip. Demons will happily take your entire life savings and simply walk away leaving you with nothing.

The second (and much more reliable) method of gaining new allies is through fusion. Allied demons can be freely fused together in order to create new, more powerful creatures. Fusion lets you get a guaranteed result that can be carefully planned out in advance, making it far more satisfying than the random happenstance of negotiation. Demons formed through fusion will actually be inherently more powerful than their wild counterparts since they are able to inherit skills from the previous demons that created them, so you’ll want to fuse new demons pretty regularly.

Unfortunately due to the nature of fusing two demons into one, you’ll have to replenish your stock of fusion fodder pretty often. You can buy previous demons back from a compendium at any time, but since money is tough to get ahold of you won’t be able to do this without getting into a lot of fights for more cash. The result—either banging your head against the negotiation wall or endlessly fighting demons for pocket change—sure starts to feel like grinding after a while. It’s not as frustrating as actual level grinding since you have a clear and defined goal that you’re trying to achieve rather than just hoping your numbers will be high enough to finally overcome a hurdle, but it can still lead to a lot of time on the battle screen with auto battle turned on.

As for the remaster itself, Nocturne HD has some pretty big highs and lows. The game’s entire script has been re-localized with dialogue rewritten to have a bit more personality. This combines well with the brand new voice acting which is not only unique to the remaster but also fully dubbed in English. The whole cast is simply fantastic, and their excellent performances lend a lot of flair and drama to every scene. 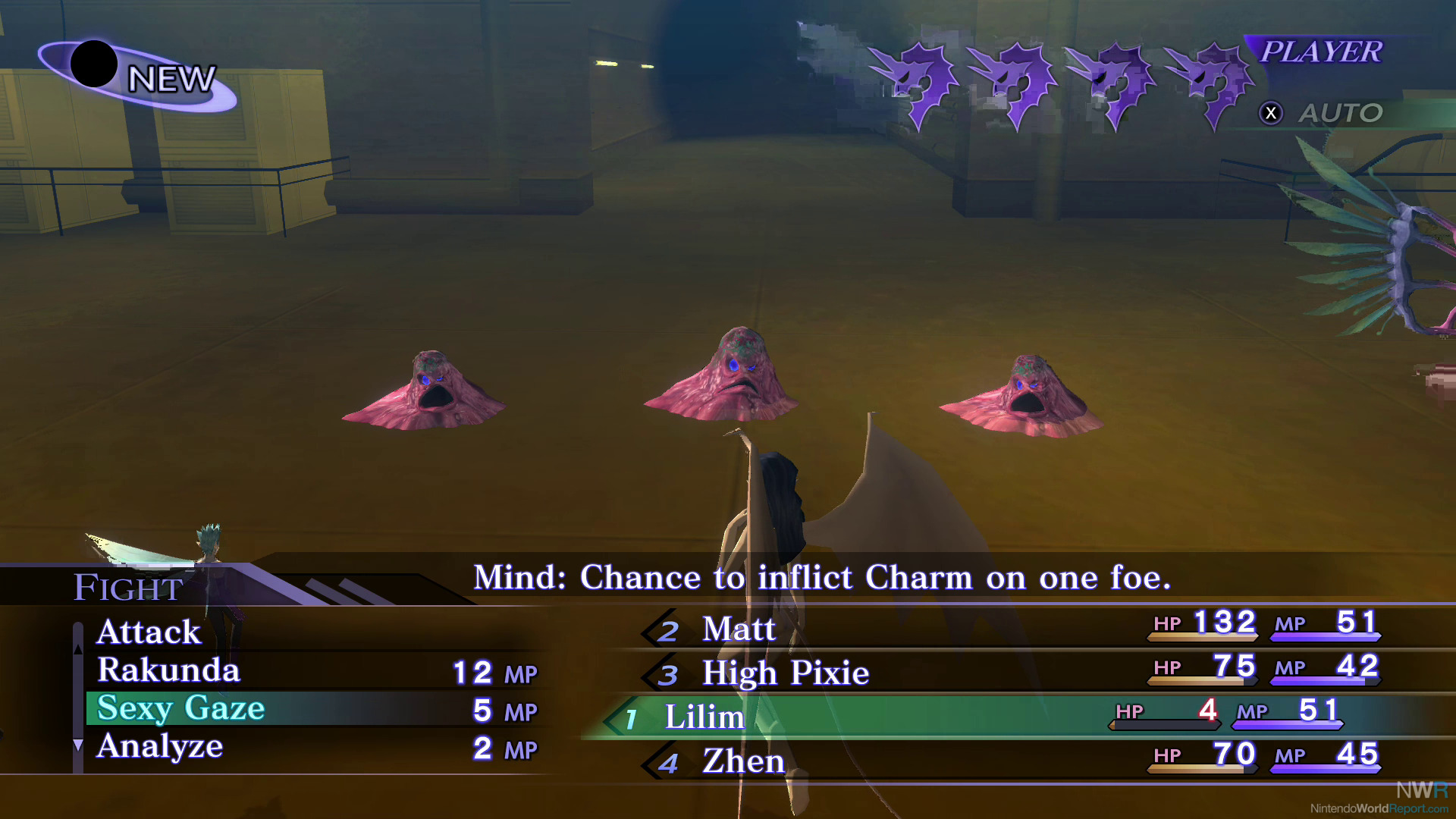 Far less impressive is the game’s technical performance. The framerate is capped at 30fps, and sometimes it struggles to hit that. Cutscenes tend to be jittery, and although the ethereal after-image effect baked into the art style is a good band-aid solution, occasionally the effects are simply too intense for the system. At worst the game can drop into the single digits, and slowdown is noticeable in battle pretty often. It never drops for very long and the turn based nature of the game means it rarely has any effect on gameplay, but it’s disappointing—and frankly a bit bewildering—that the Switch can’t even manage to keep a consistent 30fps on a game that’s nearly twenty years old.

Meanwhile what I would not call acceptable is the horrific quality of much of the game’s music. Nocturne’s fantastic soundtrack was heavily compressed in order to fit on the original PlayStation 2 disc, and that compression has not been undone in the remaster. I truly can’t think of any game on Switch with audio that sounds quite this bad, and the worst part is that it’s not even consistent across the game. Two songs that play right next to each other can have wildly different bitrates, and music will clash with the pristinely recorded voice acting and sound effects. The end result is distracting, and it is nothing short of a shame that Atlus’ own sound engineers couldn’t match up to the quality of some of the soundtrack rips that have been on YouTube longer than some people who will be buying this remaster have been alive.

Shin Megami Tensei: Nocturne is a beloved game that stands as a core pillar of its franchise history. The wildly popular Persona franchise likely wouldn’t be what it is today without Nocturne’s influence, and as a fan of both series I’m incredibly excited to see this classic title be rediscovered by a new generation. I can’t help but feel let down by the poor audio compression for the soundtrack, but ultimately that was just as much of a problem in 2003 as it is now. This is the best way to play Nocturne, and I think any fan of classic JRPGs owes it to themself to do exactly that.