The terror of the ocean can follow you wherever you go.

Despite only being a few years old, having officially left various early access programs in 2018, Subnautica has already proven a hugely influential game in the survival genre. Its blend of crafting, survival, a vast laberythian open world, freeform progression, and gripping story truly outdid anything that came before. On its journey, it has also proven difficult to run on powerful consoles and even PCs simply due to the scale and complexity of its world. Given the lackluster incarnation of similar games on Switch, such as ARK Survival Evolved, Subnautica seems an imposing port. Luckily it arrives on Switch better than one might have expected.

Subnautica opens with a crash landing on an uncharted, ocean planet. The reason for the crash and the nature of this world are, at the outset, totally unknown. From the moment you open the hatch of your lifepod the world is open to you. Ocean stretches as far as the eye can see but as long as you have clean water and food, there’s really nothing stopping you from setting off in whatever direction you choose. And while there are some mysteries to uncover on the surface, the vast majority of Subnautica’s gameplay lies waiting beneath your kicking legs. The only thing stopping you is breathable air, and your own bravery. Many, myself included, will find the world of Subnautica a blend of serene beauty and ever-lurking horror. There is a constant feeling that below you, far into the dark, more and more terrifying creatures lurk. Beyond the ocean floor lie deep tunnels that may span the entire map, and dig ever closer to the core of this world. What lies beyond the darkness is the source of Subnautica’s intrigue.

Upon starting a new game, you’ll be able to choose from four different difficulties. The default in which you’ll manage air, food, and water, a simpler mode that removes the food and water meters, a survival mode with only one life, and a creative mode which disables the story but lets you build and explore freely with no oxygen limits at all. I found the option to remove the food and water meters a particularly nice addition as it makes the experience more approachable to players not as familiar with survival games, without negatively impacting the experience. 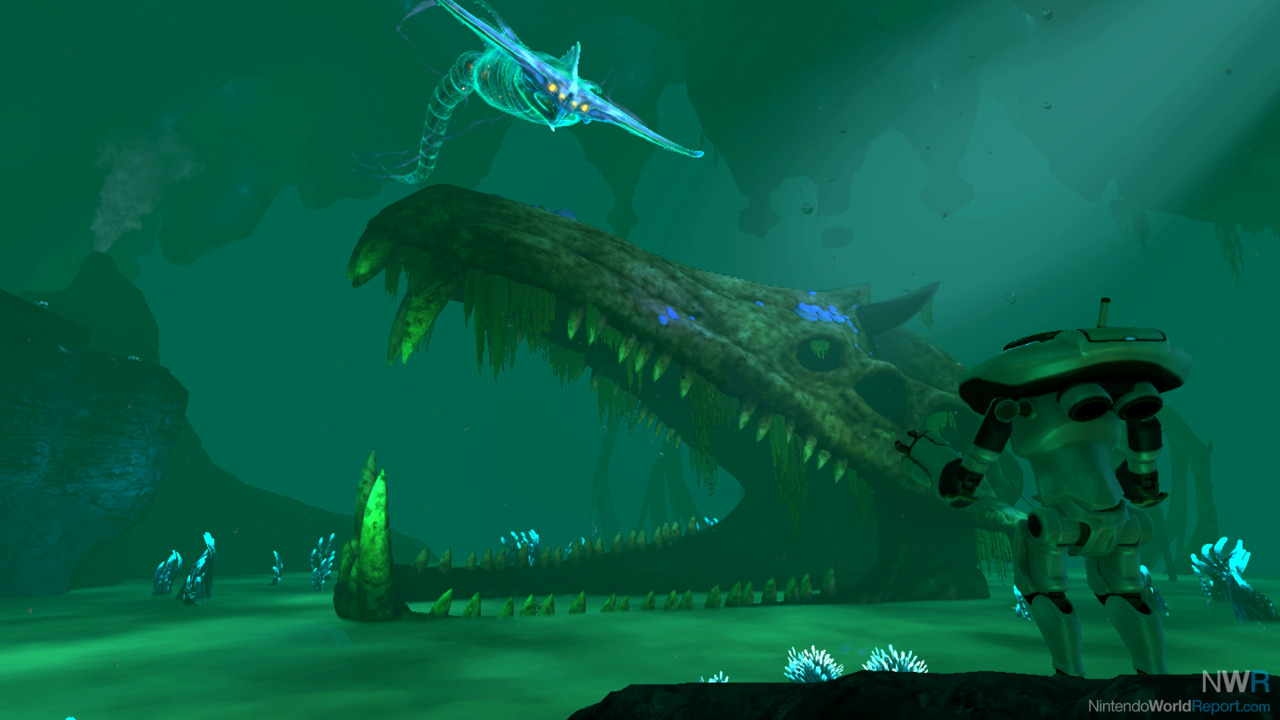 The core of Subnautica’s gameplay loop lies in crafting. You’ll dive beneath the ocean’s surface and harvest materials from the seafloor. At first your oxygen won’t last long, so you’ll need to stick to the shallow reefs near your lifepod. You can return to your lifepod in order to craft supplies, materials, and equipment. Eventually you’ll find ways to extend your oxygen supply, to swim faster, even build a base on the ocean floor. While Subnautica almost never tells you exactly what to do, it does constantly urge you to push deeper. Signals from other lifepods will draw you out farther from your own where you’ll find information and blueprints to be crafted. The crafting menu itself is one of the best implementations I’ve seen on a console. Rather than a giant grid, craftable items are separated into a few simple categories. Within each of these are a couple subcategories, and within these can be found individual items to be crafted. It is quick, intuitive, and easy to use. It makes what can so often be a cumbersome experience to navigate with a controller a simple non-intimidating part of the experience.

The Switch version itself arrives mostly unscathed. Compromises are of course present, but most of the experience translates smoothly. Textures and materials in general take a significant downgrade. Pop in, which in all honesty was never Subnautica’s strongpoint, occurs very close to the camera at times. Fog also seems thicker. It isn’t a huge difference but it does make exploring certain areas slightly more difficult. All that being said, the image it presents is clean and reasonably sharp. Especially in handheld mode, Subnautica looks excellent. The water itself, which is probably one of the most visually striking elements of Subnautica’s presentation, is preserved remarkably well on Switch. The light rays present on other platforms are missing here, but otherwise the water looks beautiful. It is clear that this was a priority, which makes sense. The sound design is also excellently translated and an entirely engrossing experience especially with headphones in handheld mode. Subnautica features an excellent soundtrack that reminds me of the Metroid Prime series, and haunting soundscapes that can go from soothing to bone chilling in an instant. You almost always hear a creature looming in the depths before you see it and the effect is incredible. I did notice pretty regular hitches whenever a new segment of the map loaded in, there were also some prolonged framerate drops in some areas that I won’t talk about too much for spoiler reasons. That being said they were areas where I was never in any danger so it didn’t damage the experience too much. 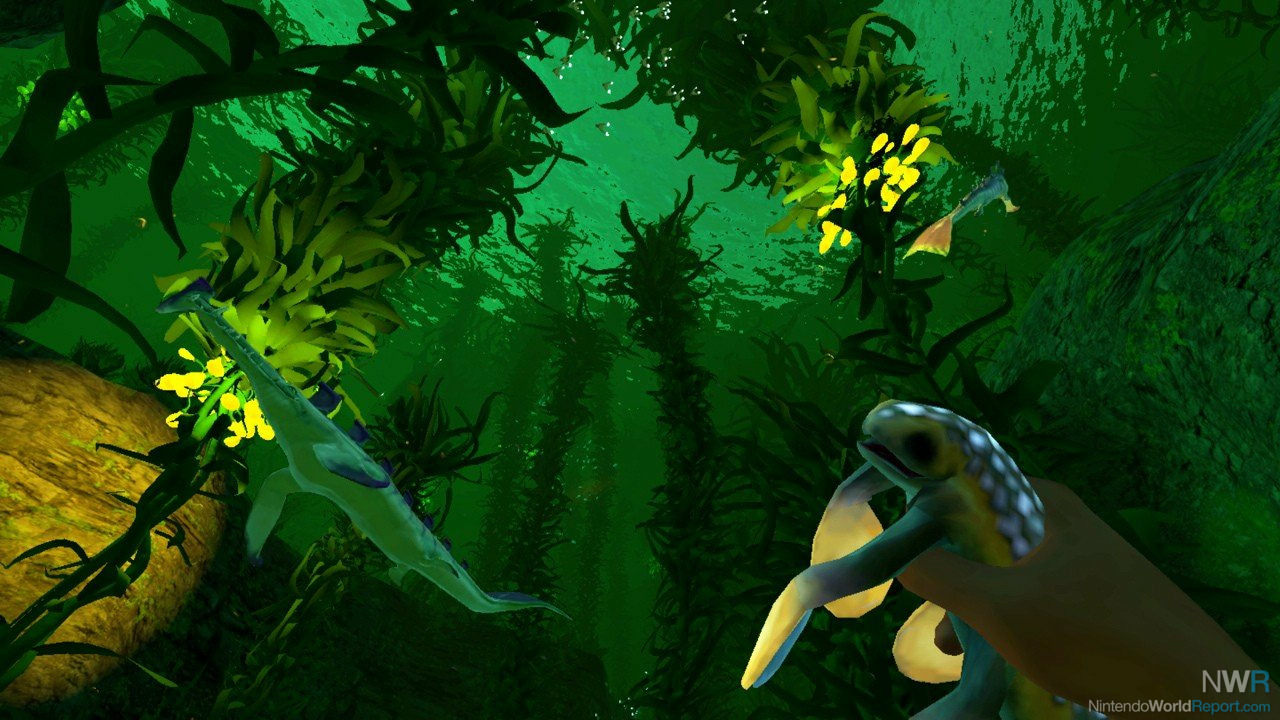 Because of Subnautica’s incredibly freeform gameplay, it is hard to go too deep in without running into something that someone might consider a spoiler. What I found in my first 20 minutes may not be seen by another player for three hours. At the same time I think that’s what makes Subnautica so compelling: every discovery feels real, not some scripted event. Players will unravel the story in an entirely different order and as a result, find their own twists as revelations hit. Subnautica is a survival and narrative experience that stands as a benchmark for the genre. The Switch version itself certainly has its drawbacks, but not enough to weigh down the experience too much. Some of them do admittedly affect gameplay mildly, but the strength of Subnautica still pushes through.