Intrepid divers and explorers will find much to love here, but others might feel left out in the cold.

One could argue that open-world adventure games reached their peak with No Man’s Sky, which continues to add content and features to its impossibly-grand universe. Subnautica: Below Zero is much smaller and tighter in scope, but the feeling of diving into the unknown, the necessity of scavenging to survive, and the loneliness of the imposed isolation are shared by both. A follow up to the original Subnautica, which left early access in 2018, Below Zero returns to the setting of Planet 4546B, but this time in a more noticeably frosty region, where players must monitor their core temperature, in addition to health, hunger, thirst, and oxygen levels. While veterans of the expansive survival-adventure genre are well-served here, the gameplay elements that aim to heighten realism might be seen by newcomers as cold-blooded.

The opening sees protagonist Robin undocking from just above the planet’s surface and crash landing into a snowy valley. From there she can scrounge up some rations, water bottles, and flares before searching for her drop pod, whose location and distance are displayed on screen. Upon retrieval, we learn that the drop pod will function as Robin’s home base, and from here she can begin searching for her sister, Amy. Besides sporadic voiced monologues from Robin and instructions and warnings from her PDA suit, there isn’t much in the way of direction or story early on. Databank entries that unlock as you explore do fill in some of the background for Robin’s mission and Planet 4546B, but story beats largely arrive in fits and starts. 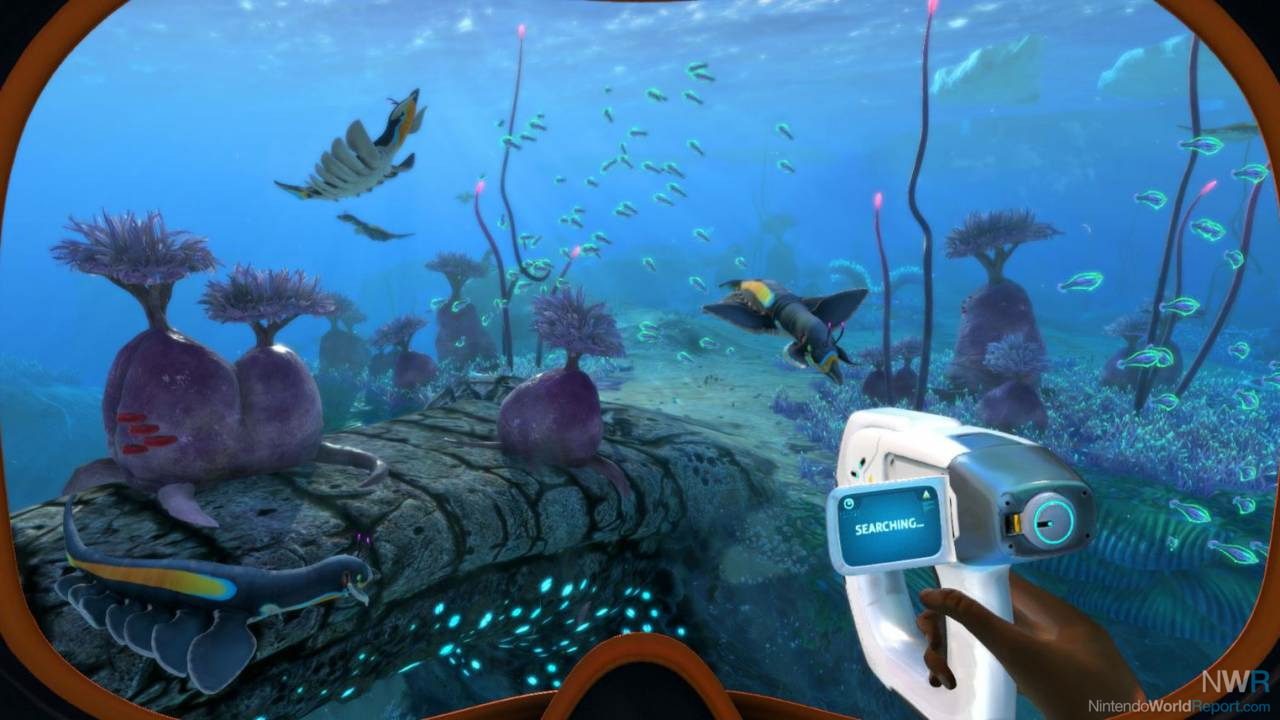 From the first-person perspective, much of your time will be spent swimming under the ocean to discover materials, aquatic life, and the planet’s hidden secrets and stories. Constructing a scanner early on allows Robin to gather info on the different objects and plants she encounters, and scanning certain structures and pieces yields blueprints that allow you to put together new items. The early game can feel a little more plodding before you upgrade your oxygen tank and craft equipment and tools to improve your mobility. Through scanning vessel fragments, you’ll eventually be able to build a submarine so that you can travel faster and deeper underwater. Leading up to that point, expect to rinse and repeat regularly the cycle of hunting, scanning, and gathering.

Even though much of the experience does take place below sea level, there are a number of areas or biomes to encounter on solid, albeit frozen, ground. Underwater caverns and crevasses house all manner of plants and sea creatures, including mischievous sea monkeys who on multiple occasions snatched tools right out of my hands. I guess that’s what we get for keeping them in fish bowls for our own amusement. Out of the water, you’ll encounter a communications tower on a not-too-distant island and a robotics facility within a frigid basin. Even though white and blue make up the predominant shades of these landscapes, the day/night cycle brings some truly remarkable vistas, whether viewed from below or up on high. It’s nothing short of mesmerizing the first time the skyline burns with red and orange, adding a refreshing blast of color. 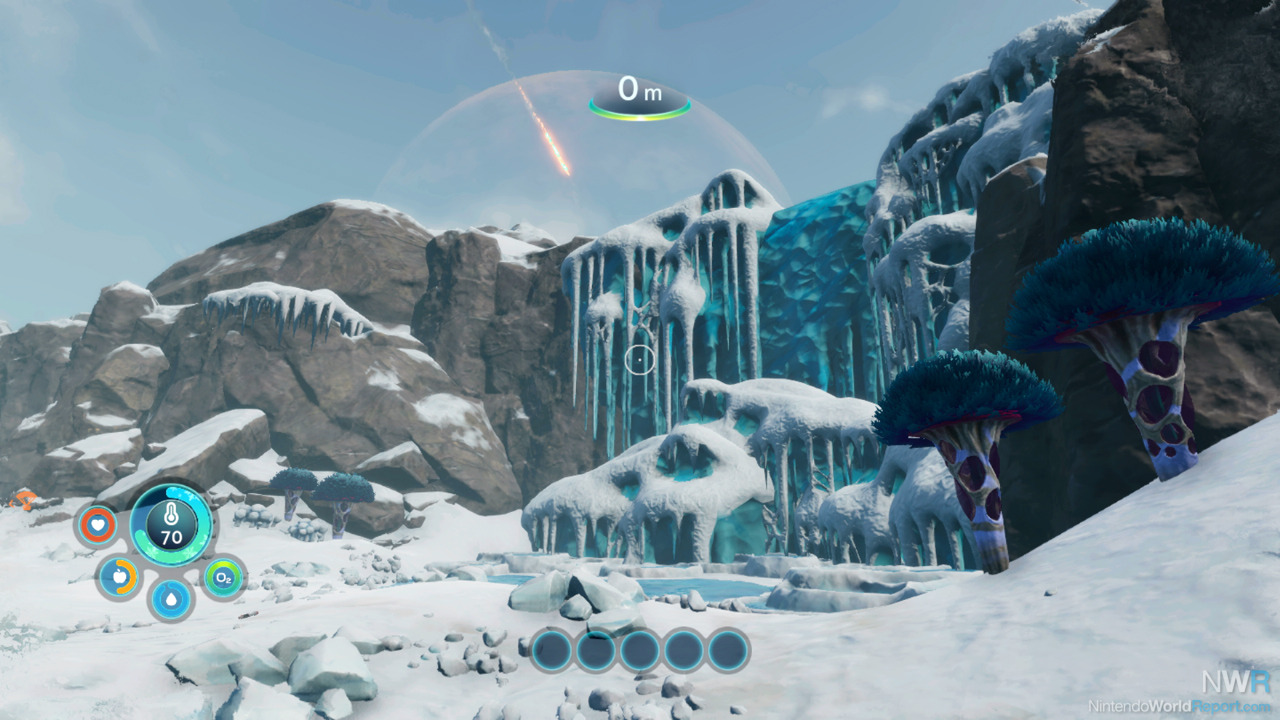 In terms of performance, it’s fairly impressive how well Subnautica: Below Zero runs on Switch. The framerate is largely consistent, except for a few instances when I was trapped in a blizzard with near-zero visibility. Underwater, though, it was smooth sailing, or scuba-ing? Something like that. The game holds up very well portably, too, and that ended up being my preferred method of play given how often I was spending my time diving for minerals and then floating back to the surface for air.

It’s important to realize that Below Zero can turn out to be a fairly slow and meandering experience. You don’t start out with any type of map, and the ones you do eventually access, in addition to a compass you can craft, still leave much to the imagination. If you aren’t one to enjoy the feeling of being lost or maybe you get frustrated when you don’t know where to go next, this probably isn’t the game for you. The freedom and openness of Subnautica is a selling point, but it’s also the thing most likely to alienate new players. Given that both games are only now coming to Switch for the first time, it’s worth considering what you’re in for before diving in. 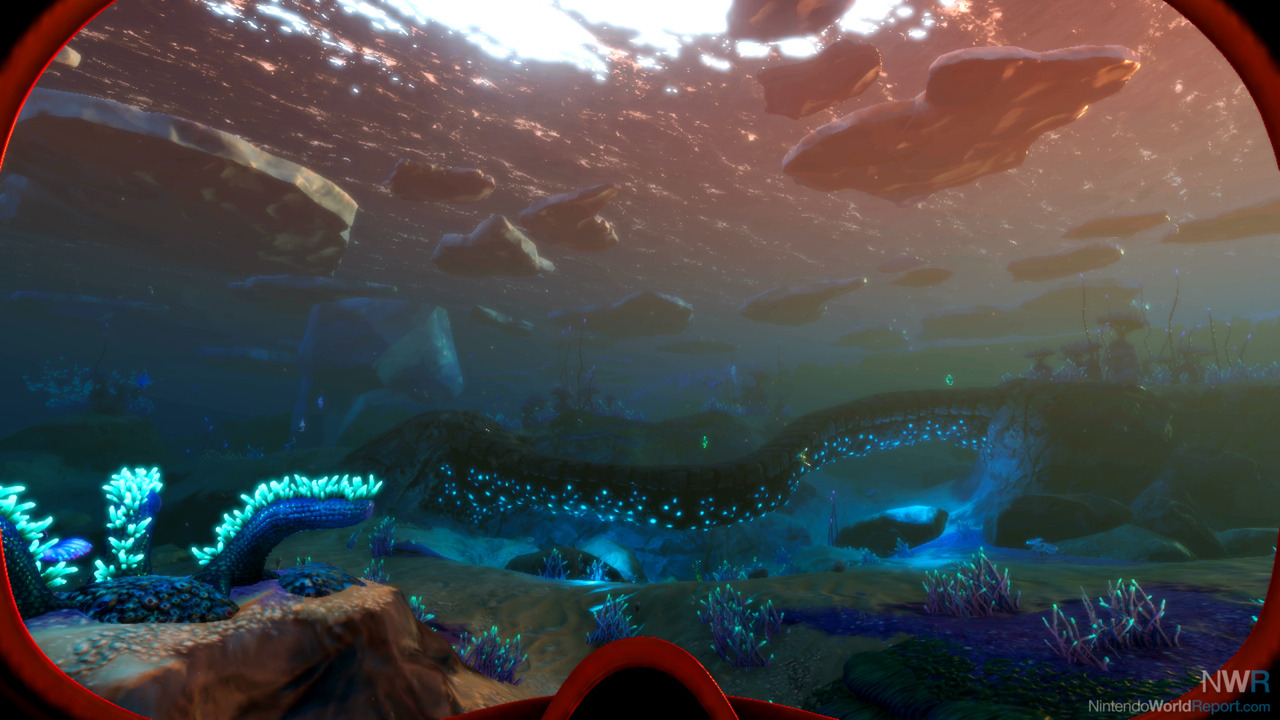 Admittedly, Subnautica: Below Zero isn’t the type of game I generally gravitate towards, but I actually did find myself rather captivated by it, in some moments. I was also frustrated by it for stretches, where I didn’t know what I needed to do or I couldn’t immediately find the resources I was lacking. There’s an engaging and somewhat diabolical push-and-pull at work here: you have the discovery of improved capabilities and new areas to explore juxtaposed with the realism mechanics of needing oxygen, crafting materials, and sustenance. Fortunately, there are a few different options at the game’s start menu that make the experience somewhat customizable, like removing the hunger and thirst parameters. Ultimately, there is much to discover both below and above the waterline, including aliens, mysterious messages, and even a mech that can walk on the ocean floor. While those looking out for signposting and clear directions should probably keep their feet dry, those who enjoy a more laid-back, albeit grindy, experience can safely dip their toes in these waters.