What is it with AI and hating on practice?

It seems fair to assume that a series would actually listen to itself when it calls a game “Final,” and for more than a decade it was true for R-Type. The shooter series wound down apart from re-releases in 2004 when R-Type Final launched by Irem, only for their successor developer Granzella to crowdfund a revival that came to Switch at the end of April 2021. The Kickstarter produced a decently designed game in R-Type Final 2 that nonetheless had me setting national records in the Pro Controller throw event. 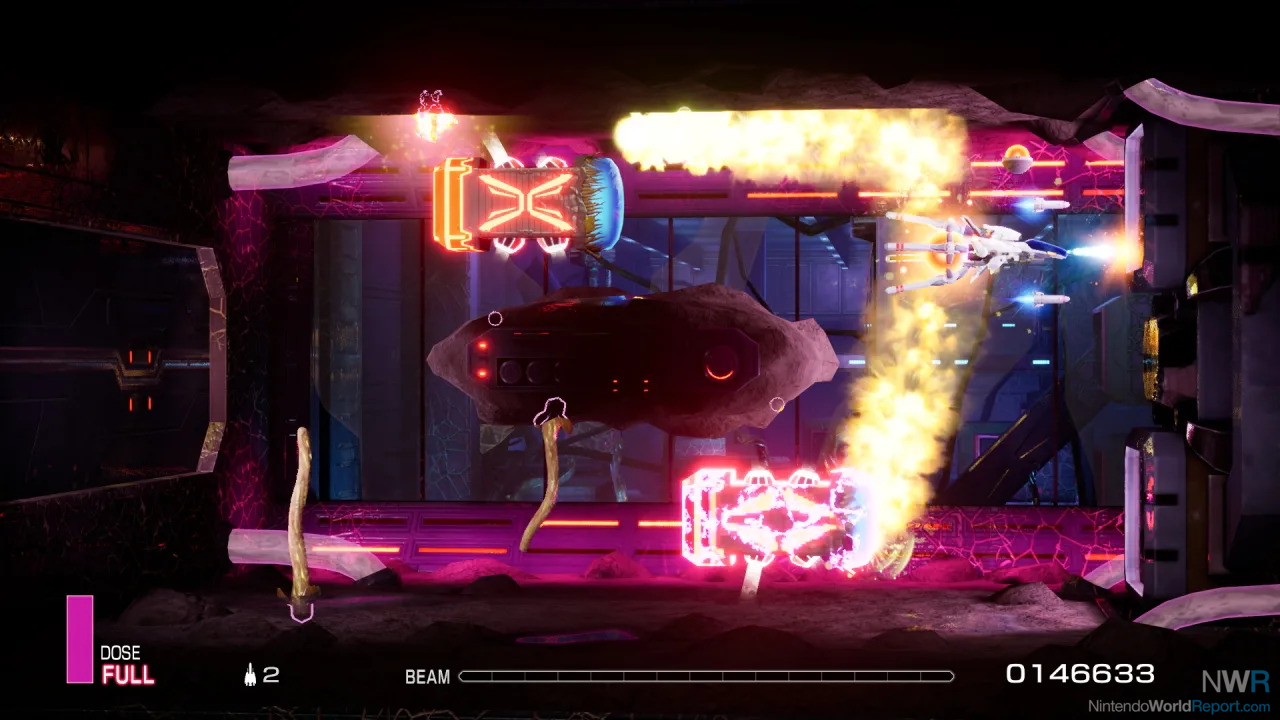 F this thing in particular.

Much like the PlayStation 2 original, R-Type Final 2 features your named (for no readily explainable reason) pilot taking out the Bydo, a race of aliens who have been menacing Earth for decades. Armed with three ships at the beginning and the ability to unlock scores more, you have to finish the fight with the Bydo. Final 2 is structured as an old-school scrolling shooter with a series of stages and most frustratingly, instantly lethal enemy fire. Touch or even graze an enemy or a bullet and you lose a life; three lives lost means a Game Over screen, with a limited number of opportunities to continue depending on the difficulty level. The “Practice” difficulty, which one would think is the easiest since it’s listed first, starts out at three lives but increases to ten and then thirty over multiple playthroughs. The next level down, called “Kids,” gives 99 continues, and by the time I walked away from my final run ready to walk out into a rainstorm and scream myself hoarse, I had used more than half of that number. I definitely don’t have the reflexes to survive long on the other three difficulties: “Normal”, “Bydo,” and “R-Typer.”

Blasting item ships (which can kill you) unlocks different power-ups, and the first one you get also brings with it a bit that can fire in multiple directions depending on the number of items you pick up and also absorbs some fire. Getting hit once brings you back to the basic gun, which can lead to a downward spiral of enjoyment if you can’t even make it to the point of getting the first item because there’s that many enemies firing at once. It’s not quite bullet hell, but sometimes I wonder. There are branching paths in the story, but I never could find out what changes: I suspect there’s one in the third stage if I could beat the boss (a giant capital ship who alternates between exposing the weak point, massive lasers, or a wave of bullets - I “timed out” the boss every time), but I’m not sure how to get to stages 6-A or 6-B. Even getting more than the basic three ships for use in combat is complicated: you have to use the game’s Museum mode to unlock one of the 99 options, then select the ship and hit Y. Unlocking the ships can happen in multiple ways: they can be built with materials earned for stage completion, unlocked after beating stages, or even via passwords (try “granzella” or “loveandpeace”). The museum does also indicate more ships are coming in updates with a neat excuse (“under development by the Granzella Corporation”). 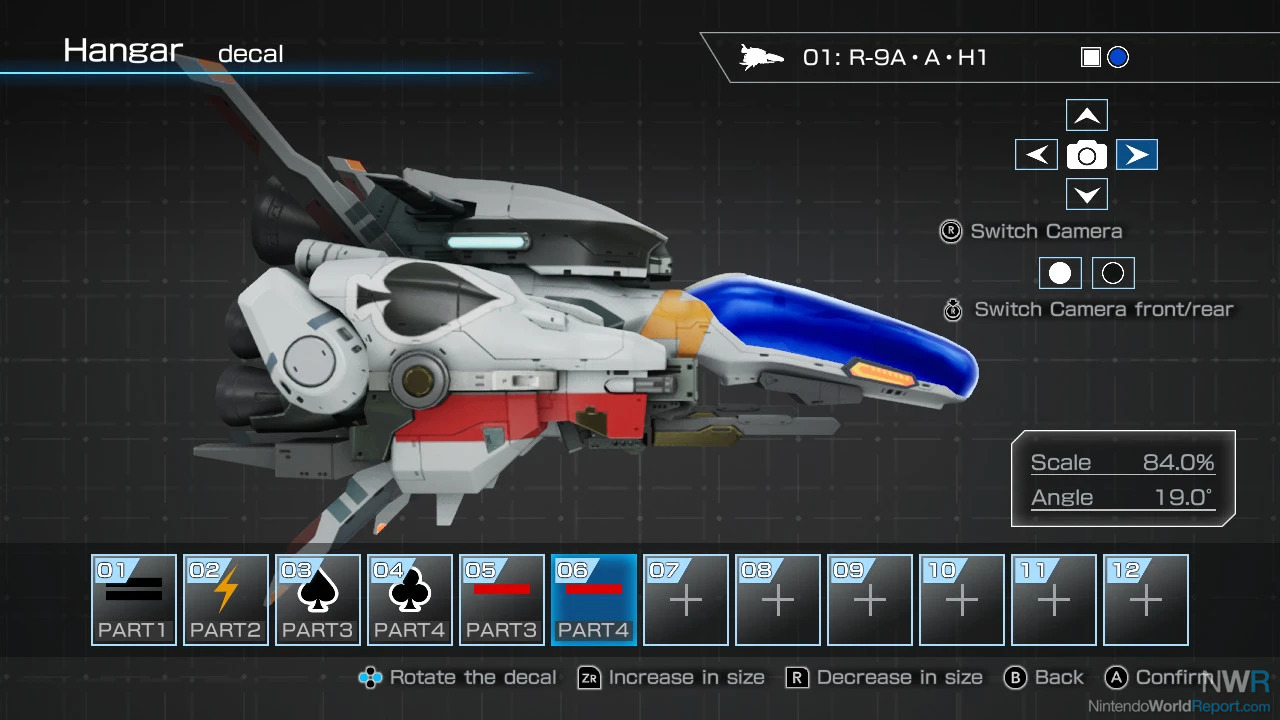 I’m not sure if the Switch was the main target platform for R-Type Final 2, but I’m assuming not based on some of its technical issues. Even a digital version still had 7 to 10-second loads between fade out and fade in for the next ship; the Game Over screen was quick to appear, though. There are also some major framerate hits in the late stages, especially in 7-1 which has capital ships flying every which way but loose and I swear the framerate dropped into the single digits; it wasn’t for dramatic effect, either. Again, the devs are planning updates, so hopefully these bumps can be smoothed out. Handheld mode is also somewhat suboptimal as some of the fire is small bullets that become even harder to see on the smaller screen.

The backgrounds in Final 2 are a bit busy, which might be contributing to the slowdown? They’re nice enough, but they fade out to keep the focus on the enemies and your ship + the bit: The enemy designs are interesting and varied, and if you get bored with the ship you’re using there are plenty of options for swapping it out. Musically, the game is fine, but the explosion of yet another stupid death will get a bit annoying after a while.

I didn’t understand what R-Type Final 2 was doing with its Practice difficulty—you’d think it’d be easy with unlimited continues. I mean, we’re talking about PRACTICE. It took me several days to get the idea of what the game was doing, so I’m probably going to bounce off it. It’s only really recommended for those with way better reflexes than me—which to be fair, is probably everyone reading this.

The continue count increases per run regardless of difficulty, you'll still get 99 or even infinite continues (don't ask me why those are different things) on R-Typer or Practice now.

The path branching happens from the four crystals that show up just before the stage 5 boss (i.e. just before the branching point), the top 3 being the three different stages and the fourth apparently a random one.

I never found R-Type particularly reflex driven, at least not at Normal or below. It's more about learning when enemies attack from where and how you should approach that, where to put the Force pod and where to move. There's very little randomness or chaos to enemy actions, except maybe the bosses so most parts of a level will act in a fairly predictable manner allowing you to just act, not react.

Your review is garbage. You sound very childish about the entire learning process, the game is superbly exciting and beyond words, reasonably speaking. I threw out the rating for this game.. How can I logically say 15/10? Reviewing this game is most likely a bad idea for anyone. Its turned fashion statement over night. What do you know about criticising Fendi? Lol.

Been chipping away at the game for a few days now, and unless you had been chomping at the bit for a new R-Type, you should probably stay away.

I'd describe myself as a shmup tourist: my ideal shooter lets me keep a fully powered ship and see the sights. IMO, that's what the "Practice" difficulty should be. Instead, you die from a bullet grazing you, depowering you and leaving you often poorly equiped to deal with the enemies just past the checkpoint. It's incredibly frustrating.

I'd describe myself as a shmup tourist: my ideal shooter lets me keep a fully powered ship and see the sights. IMO, that's what the "Practice" difficulty should be. Instead, you die from a bullet grazing you, depowering you and leaving you often poorly equiped to deal with the enemies just past the checkpoint. It's incredibly frustrating.

Yeah, the game is trying to teach players how to do every section without any powers so you can theoretically one day complete a full run regardless of power-ups. Very outdated way to do it though.
The thing about shmup-tourism in Final 2: tourism implies some sightseeing. I would argue since there are few shmups which still get budgets big enough to do this level of fidelity, to have branching paths, dozens of ships, and 80+ different enemies... R-Type is one of the few options for a great looking shmup with lots of content.

The DLC similarly elevates old stages from the series to the new glossy standard. I wish more accessible franchises (with instant respawning, no power-ups, tiny hitboxes) could still get these production levels, but it seems that's only possible nowadays if the shmup action becomes part of a bigger game like NieR or Returnal.