It turns out that eight-player co-op flying chaos rules.

When I reviewed Northplay’s previous Switch game, Conduct Together, I compared it to Flight Control. With that in mind, maybe it should have been obvious that their next game was going to be Fly Together, a worthy follow-up to the multiplayer fun of Conduct Together that features similar flight-path-planning gameplay evocative of the early iPhone classic. With shockingly good pointer controls, delightfully chaotic eight-player local play, and a winning art aesthetic, Fly Together is a stellar and playful action puzzler. 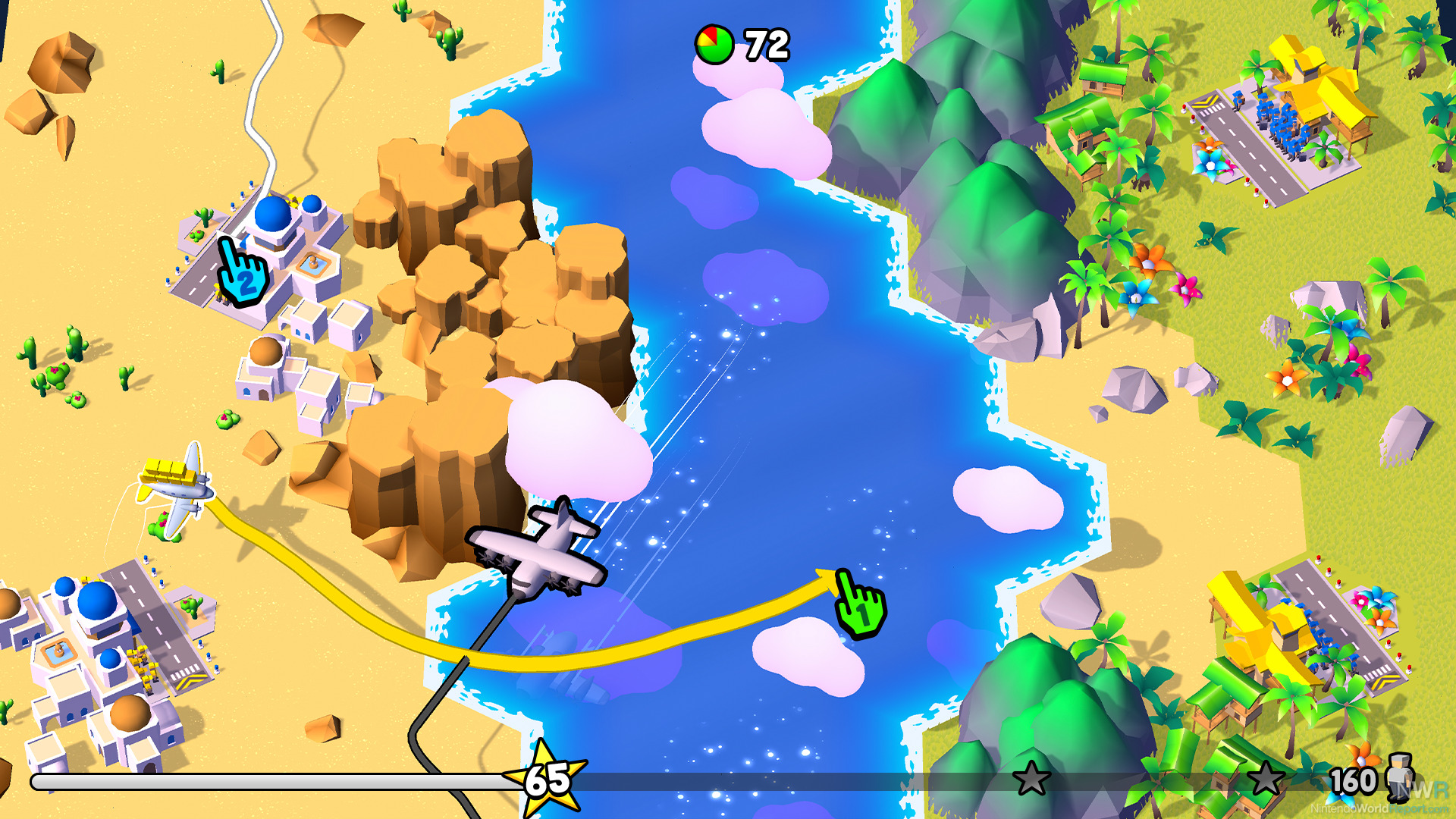 Some of the excellence comes with the caveat that the gameplay soars when the player count is increased. While things are looking up in 2021, getting a group of eight players to surround a TV and share Joy-Con is still a tall order. Much like Conduct Together, it goes from serene puzzle game in solo mode to frenetic shouting chaos in multiplayer. Your goal is to guide planes from airport to airport, delivering passengers, luggage, and more along the way. That’s done by selecting a plane and drawing their path to another airport, avoiding any obstacles or other planes along the way. Levels are split up into various worlds, all of which deepen the complexity and challenge. On top of that, you complete different missions that help expand your personal airport, where you can buy and store a growing fleet of vehicles. Throughout the whole game, you always have something to strive for, whether it’s a new plane, more levels, or topping your previous high score. Levels are scored on a star system, where completing flights increases your score with the goal being to cross the threshold to earn all available stars in the allotted time. The greatest reward, however, is the theme song that has lyrics that just describe the game’s features and options with a cheesy, synth-y backing track. The rest of the music is good, but that theme song is virtuous.

The optimal way to play is with a single Joy-Con using the pointer to control your on-screen cursor. While I’ve had struggles with some pointer-controlled Switch games in the past, the implementation here works better than I’ve seen elsewhere. Not every button is used in gameplay, so it’s very easy to reset your pointer if it gets off track by just pointing at the screen and pressing a button. Obviously the pointer controls are best on a TV, but even in tabletop mode, I found them functional with one or two players. The other control options are a little rougher around the edges, largely revolving around controlling an on-screen cursor with an analog stick. It’s all functional, but I vastly prefer the pointer controls. I do commend the flexibility of supporting all regular controller configurations, though. 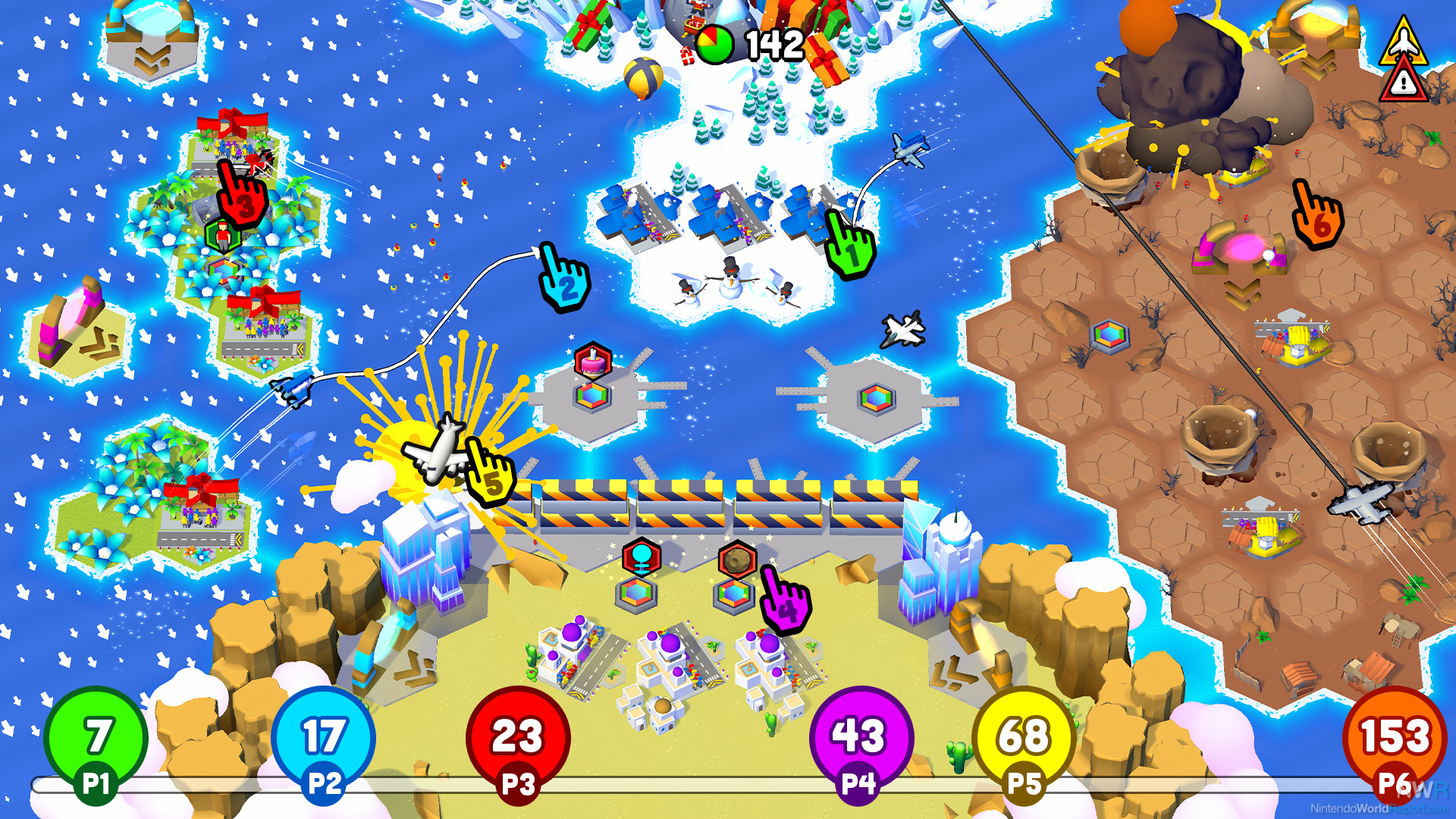 The co-op is the centerpiece, but the secret weapon might be the battle mode. Up to eight players can compete to see who can deliver the most passengers around the map while also tossing out meteors and tornados at each other. It’s delightfully silly and turns some of the co-op charm on its ear. It’s not quite as expansive as the main campaign, but it excels because the controls are easy to grasp and the gameplay is relatively immediate. I’ve run into the issue of some local multiplayer games requiring a lot of explanation and this works because it’s basically just “point, guide planes, press buttons for power-ups.”

Fly Together is just a purely enjoyable game with easy-to-learn gameplay ideas that develop in complexity over the course of dozens of levels. It works best in multiplayer, especially if you can get eight people together, but even as a solo game, this works as an enjoyable and chill puzzle game where you play the role of navigator, sending flights all over the place.