Studio Seufz sold the concept of The Longing as a game that takes 400 real-life days to finish. This isn’t really true, though. You could wait 400 days, but that’s not how it’s designed to be played. The Longing is really a game about comfort and perseverance. You play a character called The Shade, who looks like a combination of a black cat and a gremlin. Unless you do want to wait 400 actual days to finish the game, all your time will be spent trying to make them happier and more comfortable. 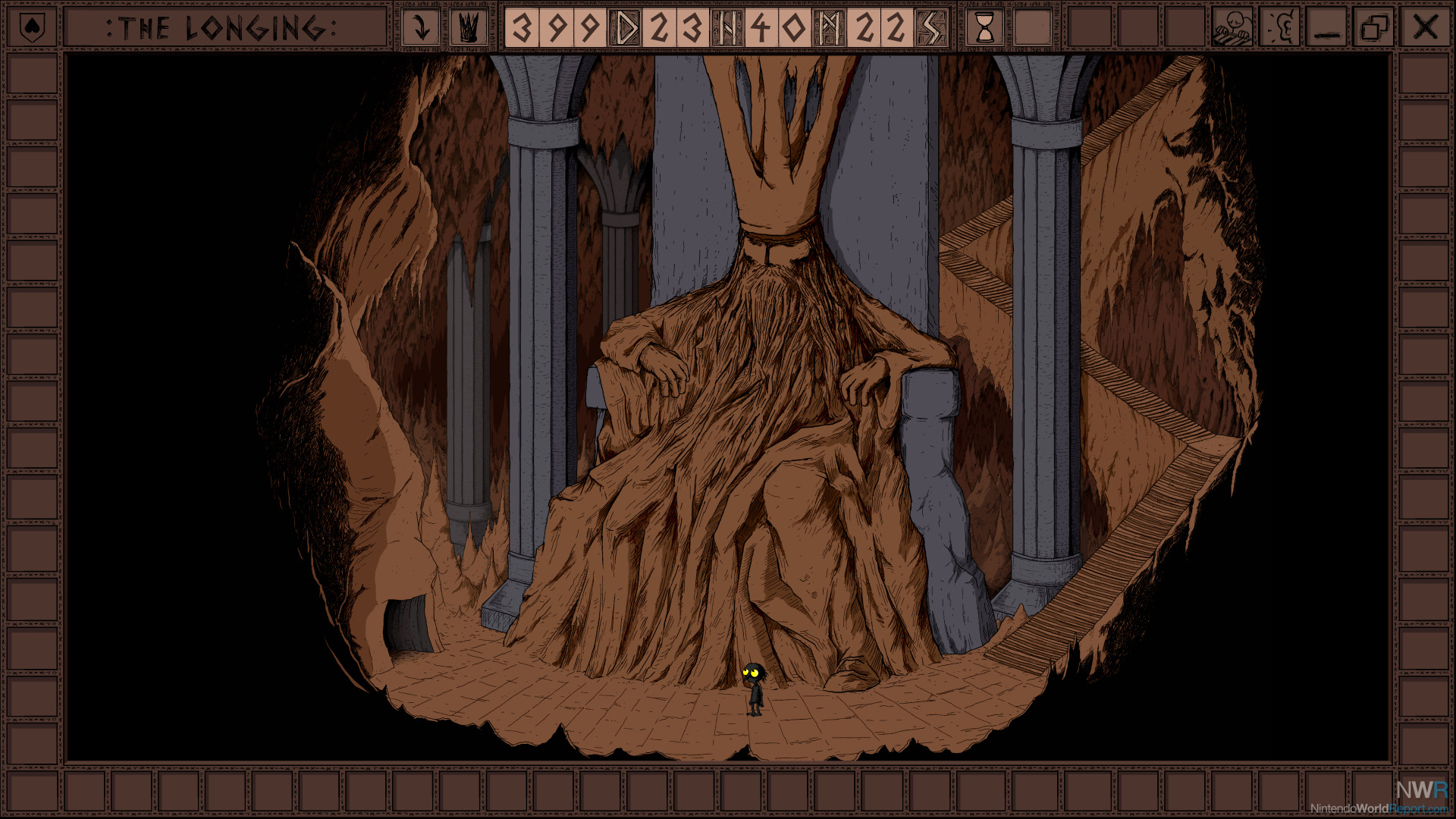 When you first open the game, a cutscene plays where a giant stone statue of a king in a large underground cavern unfurls his hand revealing The Shade. The statue tells them that he needs to gather his strength to end all longing in 400 days. How the player spends that time is at their discretion. The Longing is a mix of metroidvania, puzzler, and home designer. Immediately after the opening cutscene, The Shade wakes up in their home. It’s modest to start but will be expanded and improved over time. Transforming this dwelling into a home makes time go by faster here. Hanging art, collecting crystals, finding supplies for The Shade’s hobbies, or building a bathroom will increase how quickly the timer ticks down. This makes The Longing a home design game that I want to engage with. Eventually, other similar games lose their appeal due to the designing being an intrinsic reward exclusively. Coupling improving The Shade’s home with a gameplay purpose gave me a reason to stick with it. 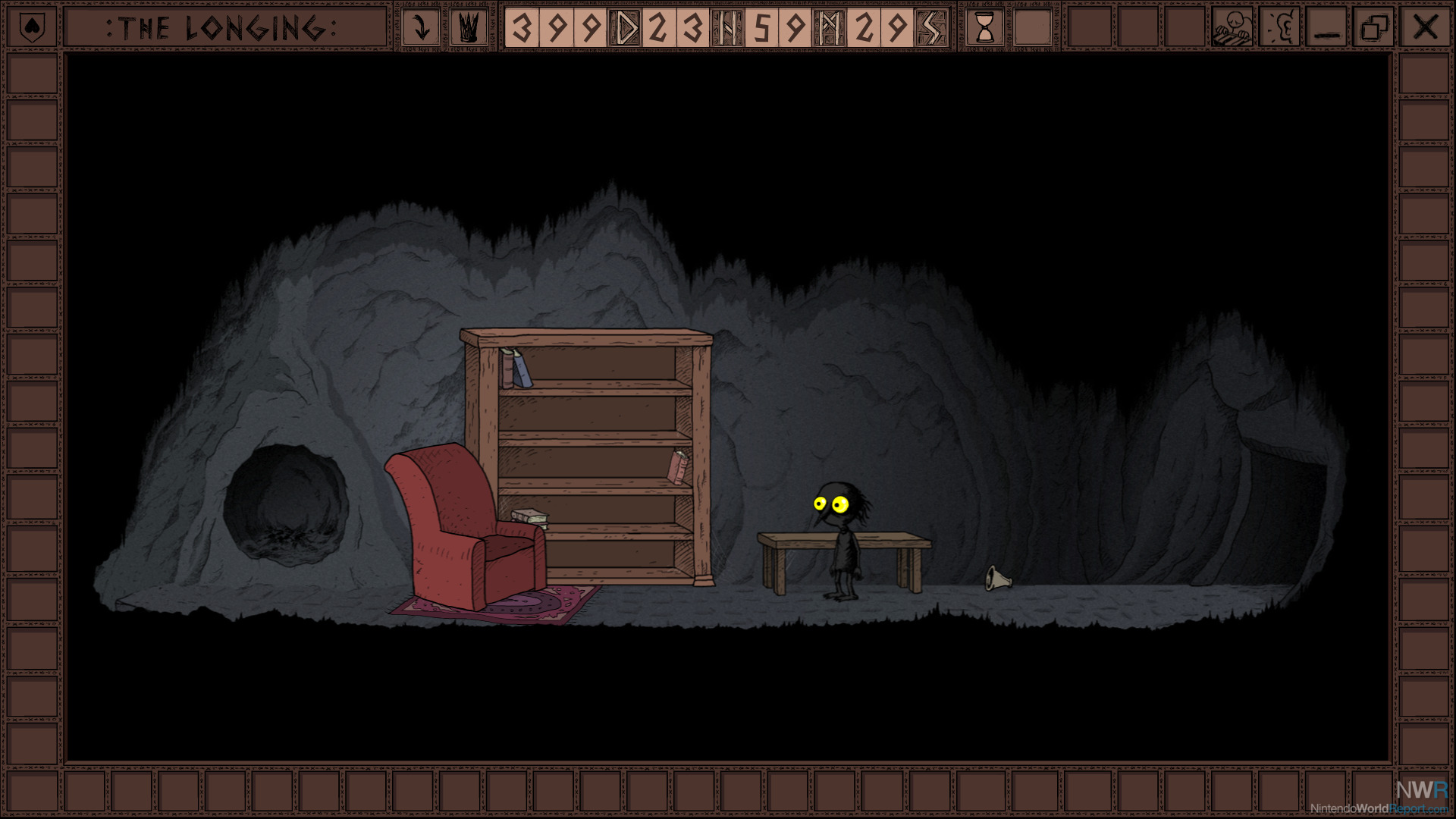 All of the creature comforts or required tools can be found exploring the underground. The game world encompasses a vast cave system with even more of it locked behind sealed pathways. The lock is either tool gated—many pathways require finding a pickaxe—or simply locked behind time. Earthbound for the SNES has an area in it locked behind a similar password; the password is to stand still for three real-time minutes. The concept of that password is a lot of what it is to play The Longing. A bed of moss needs time to grow big enough to be able to safely jump down onto it or a stalactite needs time to fall to the ground. After that set amount of time, you’ll be able to simply travel in that direction normally. Other areas are locked behind spending time doing a task there. For example, I was able to gain access to an abandoned mine by pacing back-and-forth over a weak support beam that collapsed part of the floor.

Moments like weakening the support beam are the real joy of The Longing. Video games don’t explore repeated actions and their effect on the world like this one does. The Grand Canyon was carved by the Colorado River working slowly over millions of years. The Shade is the player’s chance to become the Colorado River, and I find that really fulfilling. Forest trails are formed by being repeatedly walked on for long periods of time. A construction crew with a piece of machinery could make a path in much less time, but that isn’t nearly as special. A naturally made dirt trail is a living map of a journey. The cave system in The Longing at the end of those 400 days is a history of The Shade’s journey. 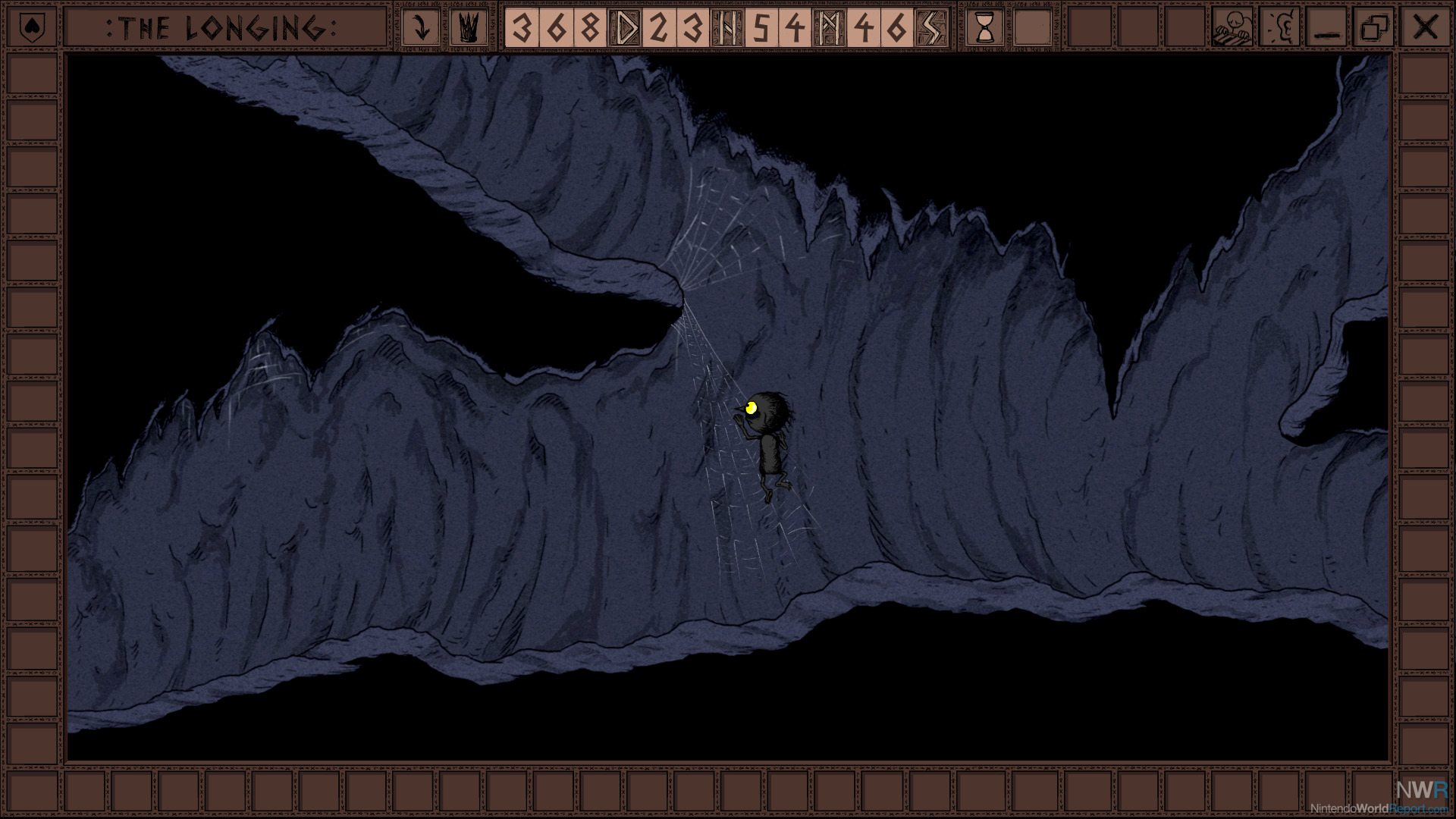 And it is a beautiful journey. For a video game that takes place underground, there are a number of distinct areas. The first section of the cave you’ll explore is full of red rocks and striking pink crystals. The next part is a dark grey area, but venturing past that leads to an endless hallway of brilliant white structures. Exploring further will lead The Shade to a green moss-covered area, purple-hued mushroom farms, or a waterfall surrounded by radiant white crystals. Each of these areas is hand-drawn and looks wonderful. It is hard to imagine a more appealing video game that is 90% rocks.

For me, another great aspect of The Longing is how much I liked spending time with The Shade. There aren’t really other characters in The Longing beside The King - who is asleep - and The Shade, but I never thought the experience was lonely. All of that is due to The Shade. They’ll frequently remark on new areas they’re in, any new items they find, or simply enjoying the act of exploring. It is very cute to walk through a puddle the first time and have The Shade mimic the noises the water makes or, when coming to a dead end, The Shade mentions how cozy that area of the kingdom is. They will also generally comment on their mental state throughout the game. It is incredibly heartwarming to watch them go from “The water is not deep enough to drown myself in” to commenting on how comfortable their home is and how they really would like to read more. 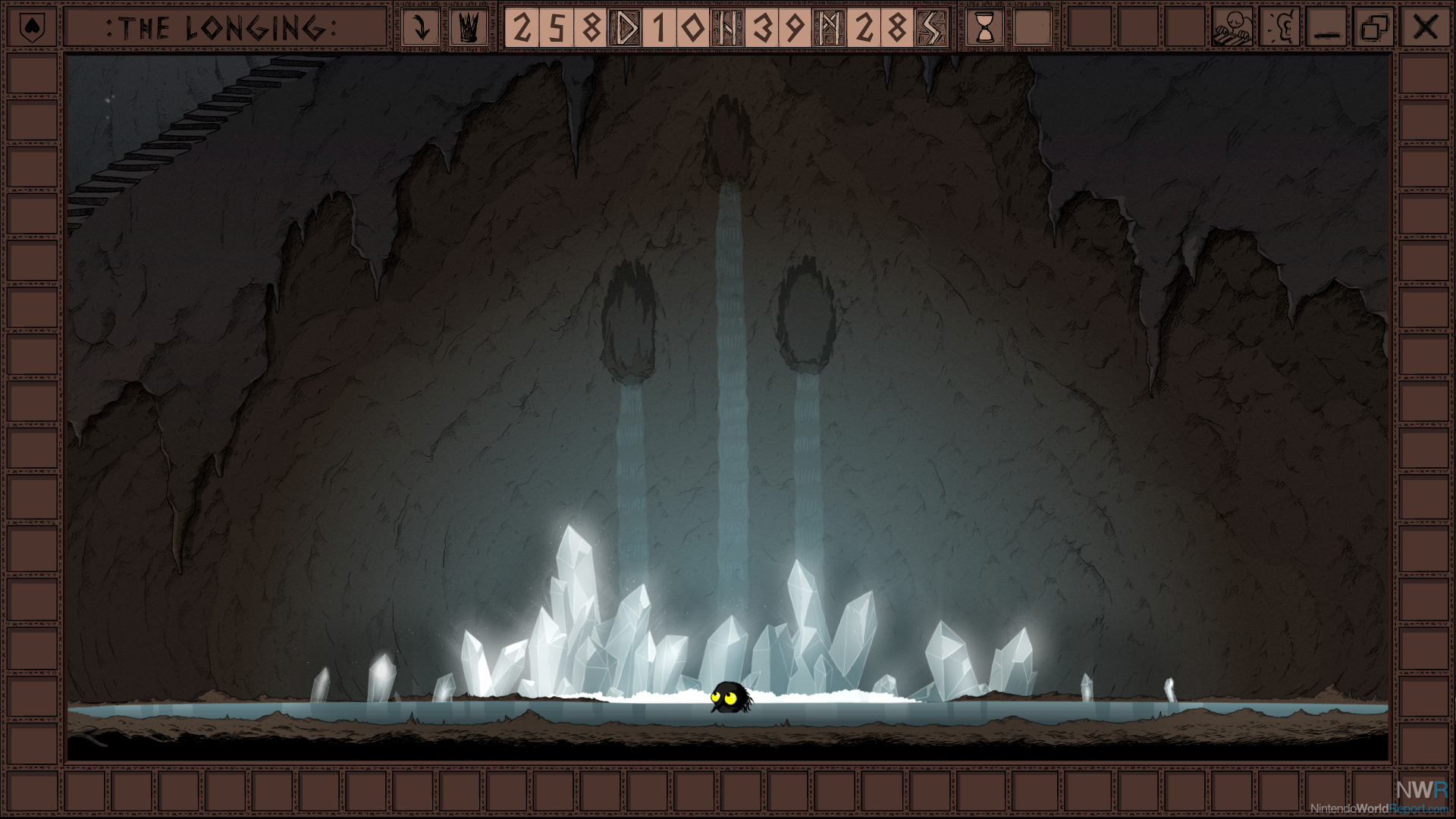 My biggest conflict about The Longing is how it fits or doesn’t fit into my life. There are times where I have 30 minutes available to play the game, but I think it’s more efficient to actually not. Taking The Shade out of their home means giving up on the dramatic increase in time that being home provides. There’s a question that I have to ask myself before loading up The Longing about whether this is enough time to go out and meaningfully interact with the world then get The Shade back home for the increase in time progression. Of course, you could always leave them out in the world, but that’s not efficient. Would I find something out there that would make not shortening the amount of time for that spider to weave me a ladder worth it? Sometimes, not playing The Longing will allow a player to progress faster than playing The Longing. It’s weird.

Another odd quirk is that I was also usually playing something else. The Shade takes a long time to do things and the game doesn’t allow you to set him on a task and then close the game. The Switch going to sleep or closing The Longing will cause The Shade to stop whatever they’re doing. Accomplishing a slow task means staying with The Shade accomplishing the slow task. On one hand, this is good because anything that you need them to do is actually achievable in a reasonable amount of time; It will never take them two hours to mine for resources. On the other hand, this means a lot of time is spent with my Nintendo Switch in my lap making sure it doesn’t fall asleep while playing on my phone. Mining for resources might only take five minutes, but I don’t actually want to watch The Shade swing a pickaxe for five minutes. 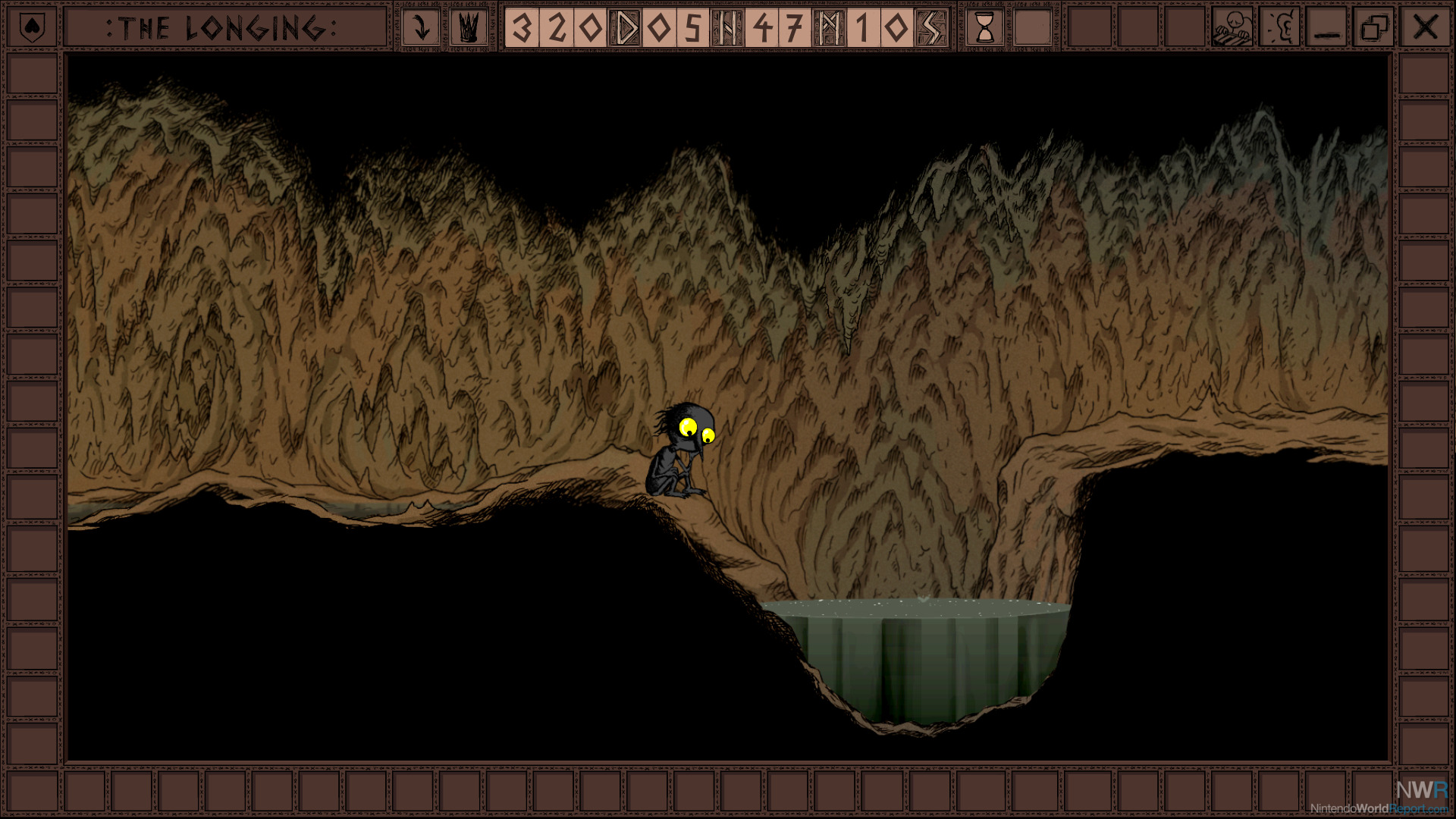 The Longing is a very special game that alters how someone plays a game, what a puzzle can be, or even what a game can be. This is a fun game full of moments that are exciting, which is honestly surprising for what might be the slowest game ever made. Finding a new tool or a decoration to make The Shade’s home more comfortable is truly joyous, and I love that the puzzles are clever and unique. No other game is going to lock progression behind waiting two hours for a door to open. No other game is going to make moving a rock across a room take three minutes and dozens of button presses. I just don’t know if I think that wanting to play a different video game while waiting for another video game to play itself is good. Should an entertainment product be constantly engaging? I don’t really know. However, I do know that I wouldn’t change a single thing about The Longing.