Signs of the Sojourner (Switch) Review

A novel take on the deck-building genre.

I felt like I knew what to expect going into Echodog Games’ Signs of the Sojourner. It’s described as a narrative card game with the hook being that you’re not in combat with your opponent but instead in conversation. The idea is compelling, but I just expected a straightforward structure that featured typical combat concepts just with a different visualization. While this game clearly is inspired by the deck-building card video games that came before it, the actual way that Signs of the Sojourner unfurls is wholly distinct. Nimbly, the game manages to feel like a polished visual novel that doesn’t rely on you to pick the right responses, but instead puts the onus on you to build your deck and play your cards to have a successful conversation with all the folks you come across. 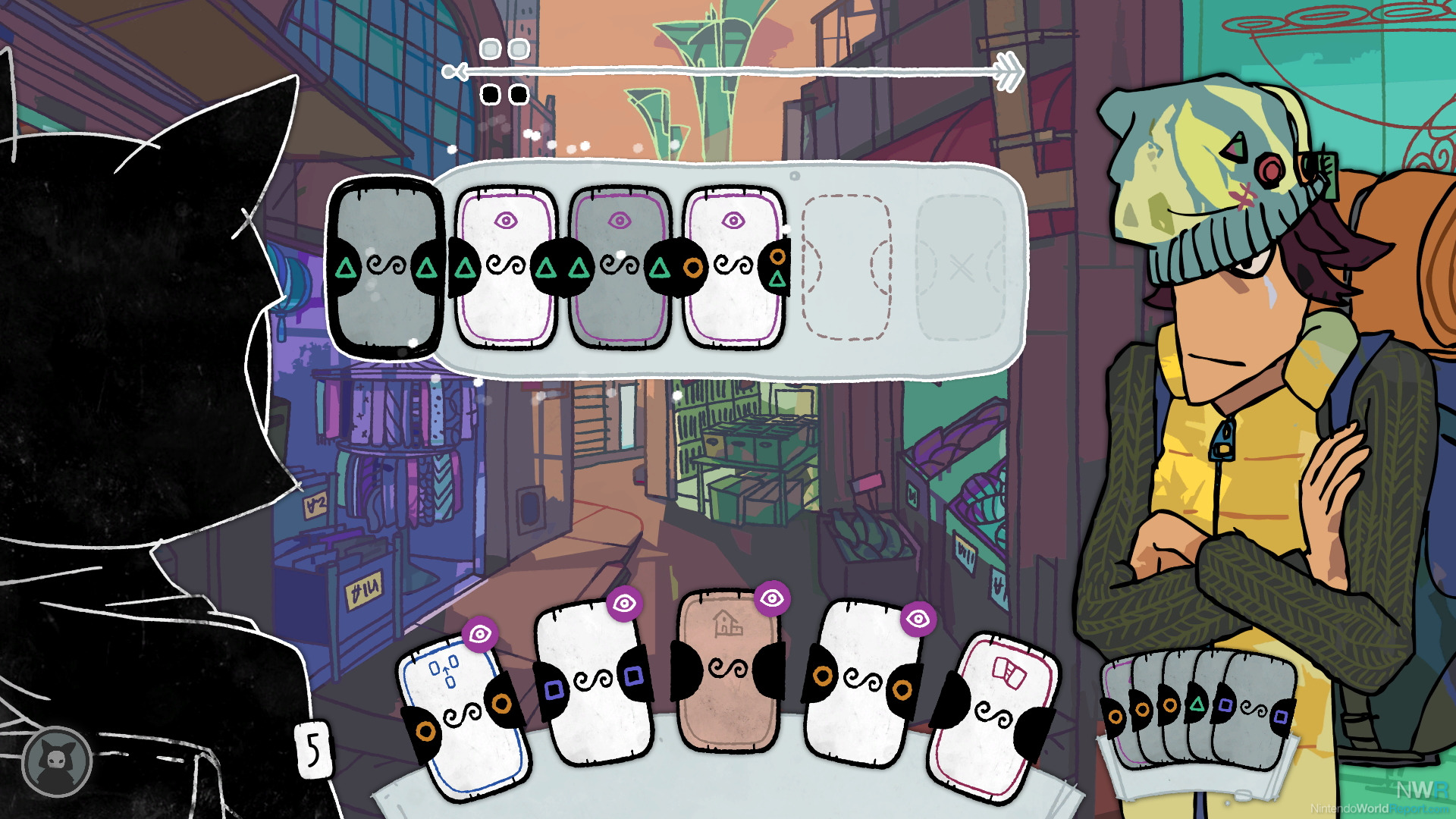 You play a nameless protagonist who recently lost their mother, a shop owner in a town that is off the beaten path. The only way the shop survived was because it was a stop on a trading caravan, but Nadine, the woman who runs the caravan, doesn’t think it’s worth keeping this shop in a two-bit town on the route. Over the course of five journeys, you travel to different towns and locales, conversing with the people you come across as you try to find a way to keep your mom’s shop from shutting down and also learn about the world.

Your core actions are conversations, which play out as a simple card game. Each card has a symbol (or multiple symbols) on each side. Your goal is to play cards that match the right symbol of your partner’s cards. A round of matching up cards simulates the tenor of the chat. Mismatching stalls the proceedings, and enough failures result in the conversation ending without much resolution. The symbols on the cards match up with the thrust of the talk, as circles represent gentle, clear observations, triangles represent diplomatic logic, and squares represent stubborn and direct chatter. A paw print, only used by dogs, is a wild card that matches all symbols because, well, dogs love everybody. 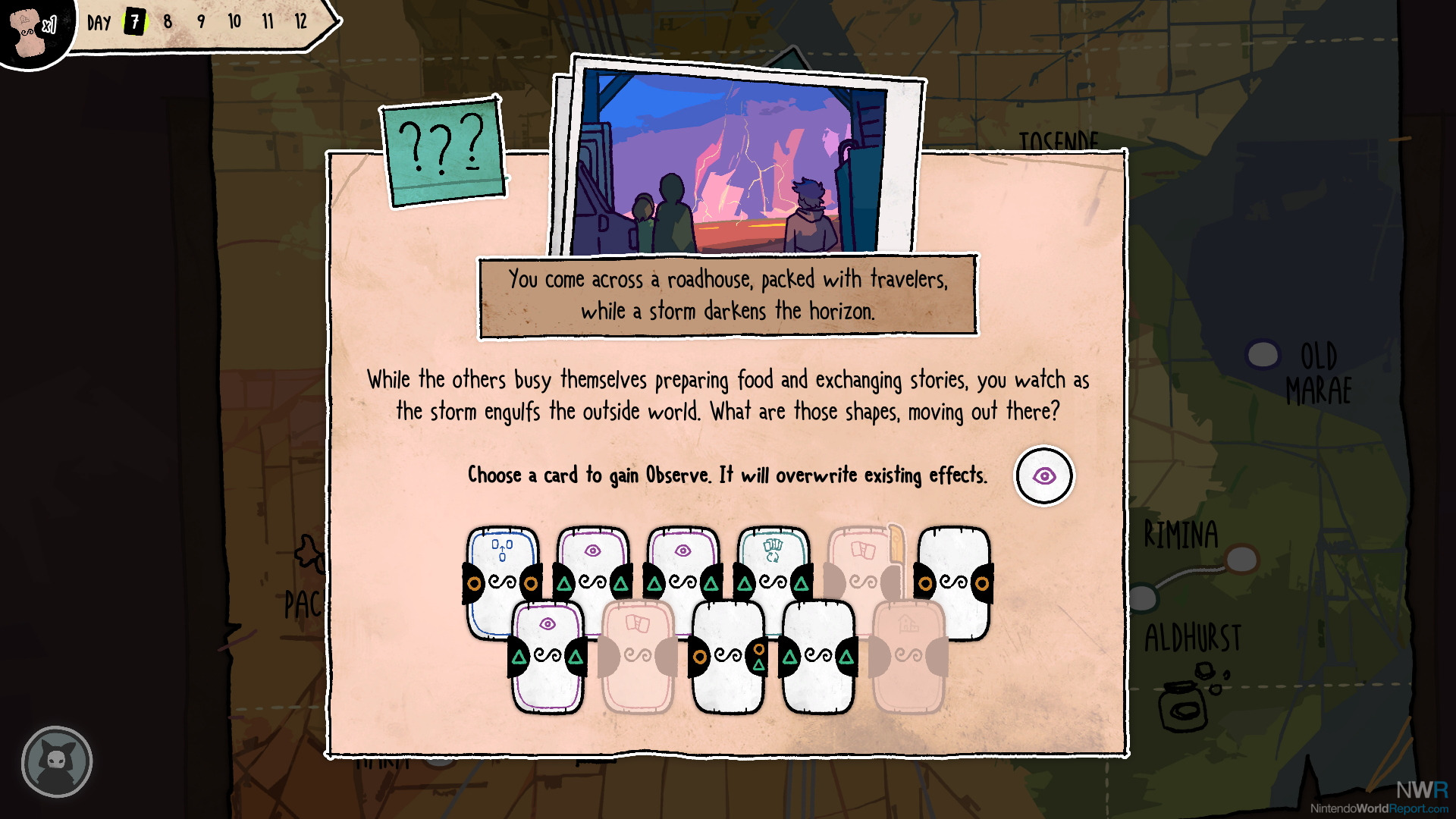 Complicating the card-driven conversations are the fact that you only have a 10-card hand and you have to take a card from every person that you talk to. It’s a neat touch representing how we take something from every interaction, no matter how meaningless, but it also plays into an overarching strategy. Initially, I talked to everyone I could, but as I got farther, I started to strategically avoid talking to people I knew would give me cards I didn’t want. Other effects add more depth as you can get cards that have special abilities, whether it’s copying the previously played card or inserting a card into an earlier part of the conversation. It takes a little while to understand, but once it clicks, playing out conversations has a good tension of requiring some deft play to complete while you wait to see what potential new story revelations you’re told. It goes deeper as well because you might not want to have a peaceful conversation with everyone you meet. You might purposefully disagree with someone you don’t like because it doesn’t fit your overall agenda. 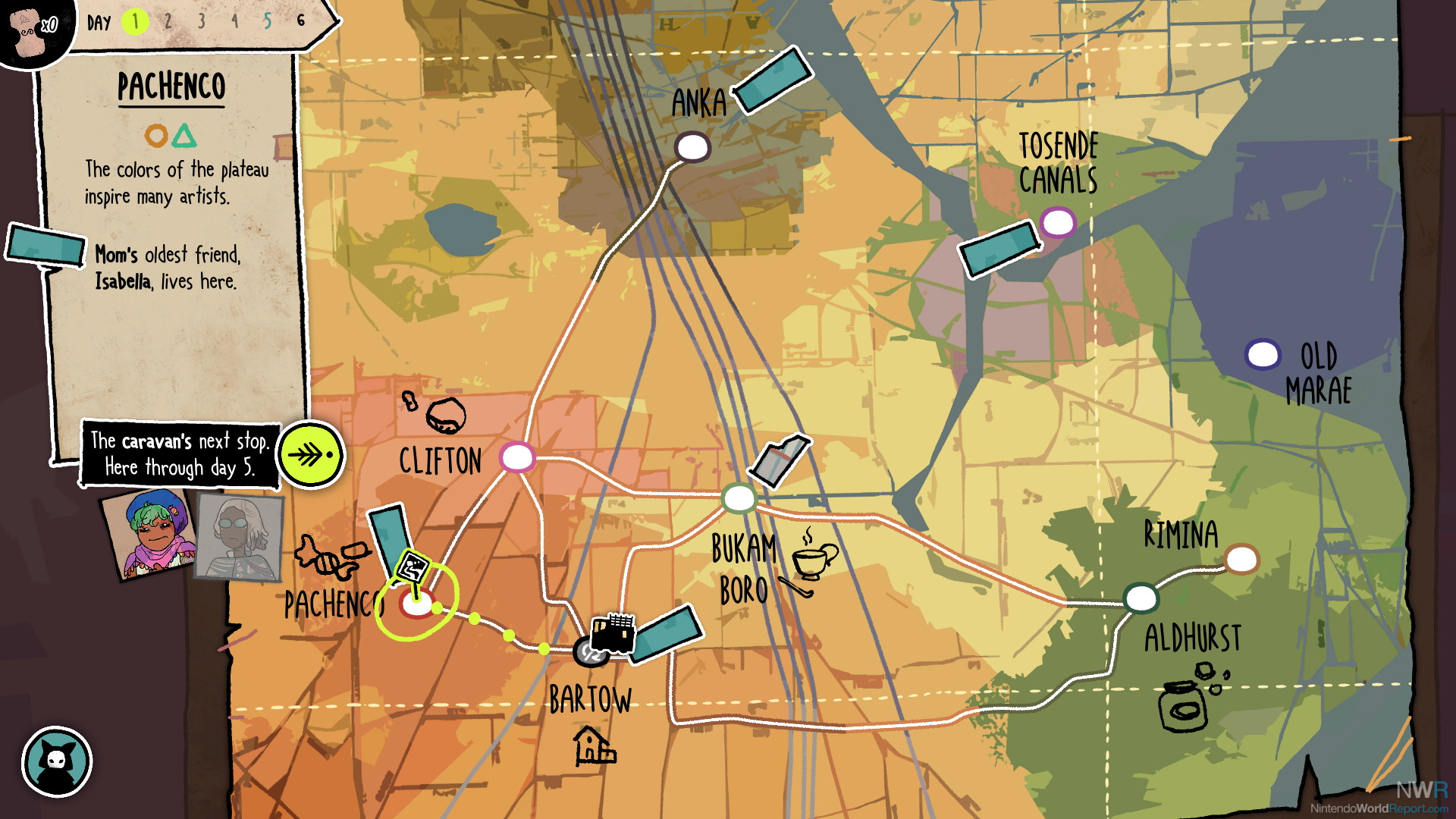 The big picture aspects of the narrative aren’t that shocking, but the personal stories of the individual characters you meet are endearing and sometimes surprising. Depending on the path you choose, you can find out a lot more about your mom, piss off the wrong people, and help forlorn parts of the world prosper. It’s largely open-ended and somewhat daunting, but I let my first playthrough almost wash over me, just trying to play my character as it made sense to me. Just a single playthrough felt fulfilling, clocking in at around three hours. Numerous branching paths and endings reward subsequent playthroughs, though. The game doesn’t do that good of a job of communicating what different endings or story options exist. No real persistence from playthrough to playthrough makes it harder to keep track of what you have done. Still, you can engineer your deck to focus on certain characters or plotlines. Some people are stubborn, requiring you to make sure your deck has enough squares to converse with them. Other characters might become frazzled, which makes them erratically play cards and also use a rare symbol that represents distress.

Signs of the Sojourner is a refreshing game, succeeding largely in how well it takes eternally relatable ideas like talking to other people and transforming them into a very sensical card game that has a surprising amount of depth despite a straightforward presentation. The way playing cards represents conversations is genius, making this a standout for how unique it feels.