A relic of a simpler time.

Game design is an ever evolving art form. The pinnacle of a genre may a few years later become a quaint display of outdated philosophies. Perhaps nowhere is this more clear than in the realm of open-worlds, where a benchmark like Skyrim can so instantaneously be pushed aside by Breath of the Wild. Kingdoms of Amalur: Re-Reckoning, the latest victim of THQ Nordic’s questionable remaster naming conventions, is perhaps the greatest example I’ve seen of this concept in a very long time. It is simultaneously a fantastic, open-world western RPG, whilst also displaying some of the most frustratingly dated game design the 7th generation has to offer.

Kingdoms of Amalur: Re-Reckoning, a remaster of Kingdoms of Amalur: Reckoning, originally released on Xbox 360 and PS3 in 2012. With an all star cast of designers, Kingdoms of Amalur was one of many titles that went into development in the aftermath of Elder Scrolls IV: Oblivion’s reinvention of the genre. It offered an expansive world which would ultimately grow further with DLC, colorful visuals saturated with bloom typical of this generation, hack and slash style combat to draw in action fans, and more lore than most players would ever bother diving into. It launched to favorable reviews and was set to spawn a franchise before the development studio ultimately shut down due to bankruptcy and the rights passed to the taxpayers of Rhode Island. Listen, there’s a whole story there to dig into, but I’m trying to keep this concise. In 2018, THQ Nordic purchased the rights and released Kingdoms of Amalur Re-Reckoning on Xbox One and PlayStation 4 in 2020. Now a year later, this version arrives on Switch.

You play as a mysterious hero, resurrected from the dead with no knowledge of your past. As someone who has already died, our hero is found to be able to modify the threads of fate and is the only hope the world has of holding back the evil Tuatha, a group of rogue elves bent on world domination. The plot is dense with lots of confusing names you’ll likely have trouble keeping track of. Luckily the bad guys wear black armor and glow red, so it's usually pretty obvious who needs a good stabbing. The general progression could be compared to the work of BioWare, with multiple dialogue options, and a dialogue wheel that's hard not to compare to Mass Effect. 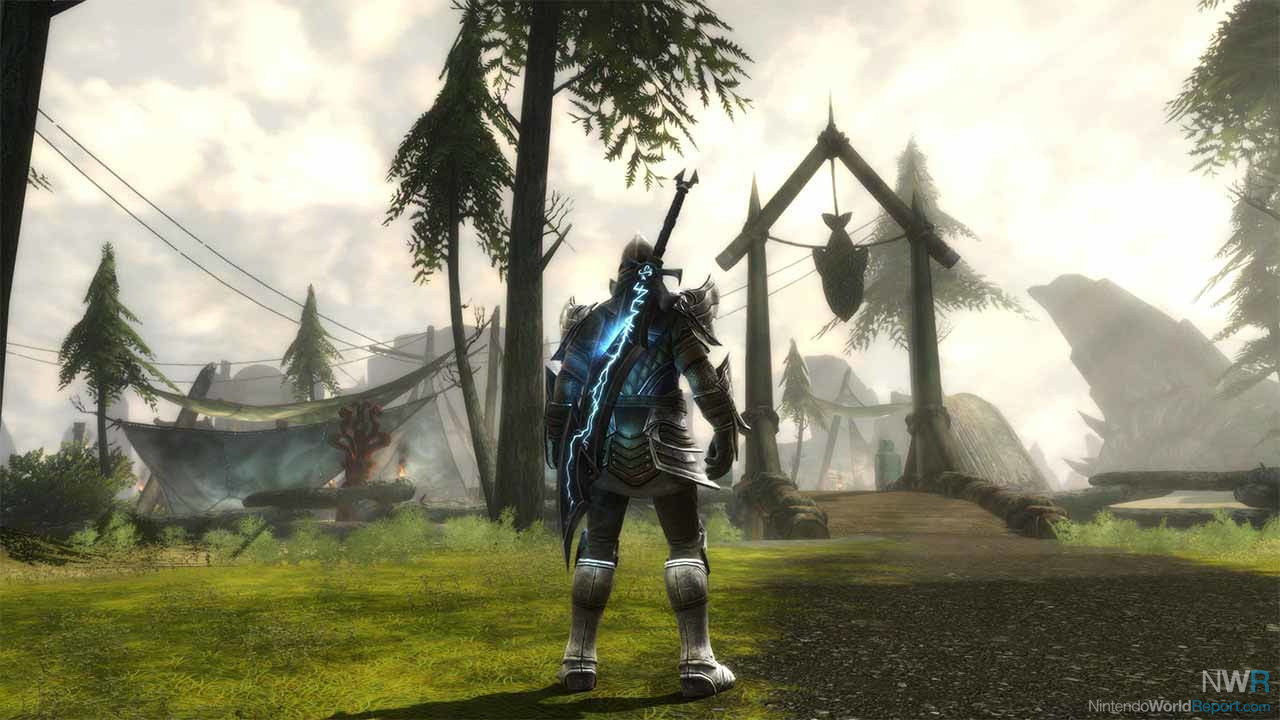 Kingdoms of Amalur is somewhat open-world. The map opens up in multiple large regions, and once a region opens up you are free to explore it as you wish. Towns, dungeons, and sidequests are littered throughout each area. A huge amount of the content available in Kingdoms of Amalur is entirely optional. Pushing your way through the primary quest line will leave you missing most of it. Unfortunately, despite being a very late 7th generation game, the world is by no means seamless. Loading screens occur between each area, dungeon, and building. When held against something like Skyrim which originally released just a few months prior, Kingdoms of Amalur’s world feels restrained by comparison. That being said, the regions on offer are diverse, ranging from overgrown forests, to vast fields, and deserts.

Combat was one of Kingdoms of Amalur’s widest departures from genre norms at the time. Combat encounters feel more like a hack-and-slash brawler, rather than a traditional RPG. The design in general isn’t too far off from a modern action RPG. At any time you can equip two weapons, which will each be assigned to a different button. Weapon types range from multiple sword styles, to bows, knives, and magical staves. Changing weapons types has a huge effect on gameplay. Likewise, as you level up you’ll be able to unlock skills to increase your proficiency with various weapons and abilities. Spells can also be unlocked that can either add variety to combat, or be developed to the point of rendering weapons mostly useless. Character development in terms of combat is incredibly freeform. The only hitch in the combat is one that really can’t be chalked up to age, as it had been established two generations earlier. Kingdoms of Amalur doesn’t let you target an enemy. Instead, you constantly fight with the camera to keep your opponents in view as it seemingly intentionally swings around to face in the wrong direction. This wasn’t a new concept in 2012, and the absence of a targeting system is baffling. It also would have made an incredibly helpful addition to this remastered version. 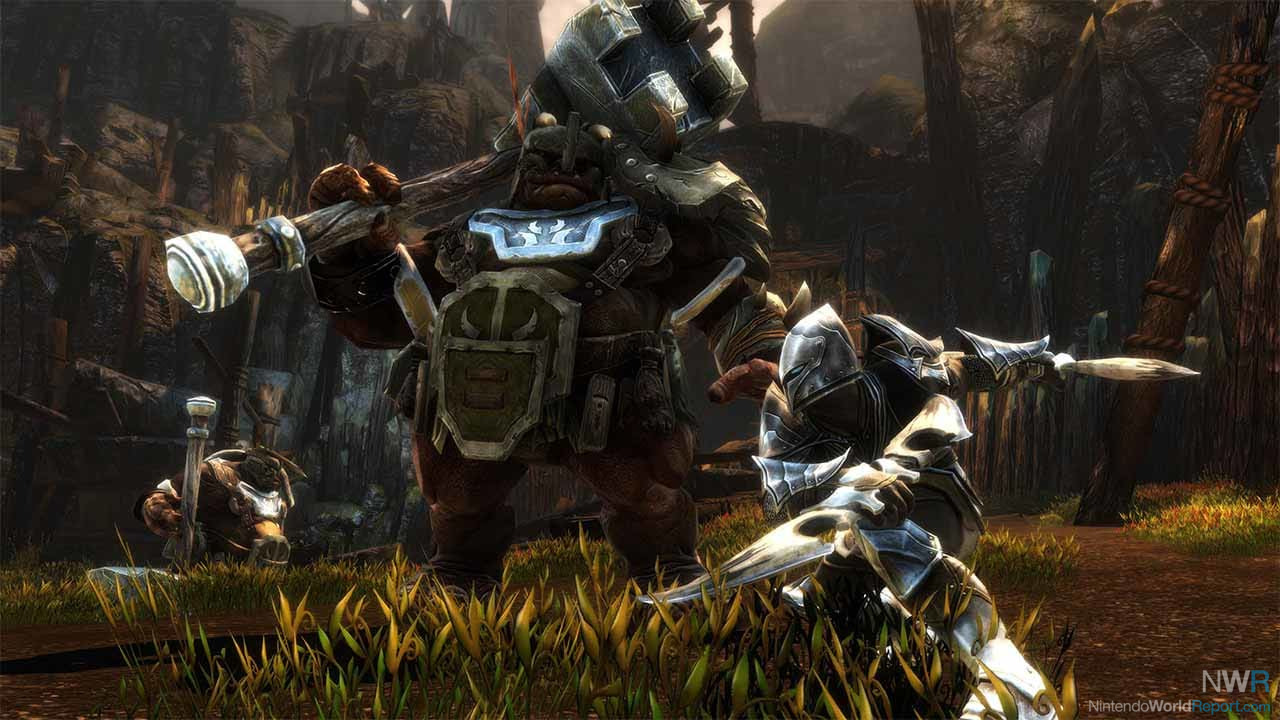 The Re-Reckoning version of Kingdoms of Amalur was developed by Kaiko, who also created the Warmastered version of the first Darksiders game, and the Re-Mars-tered edition of Red Faction Guerrilla, both of which have excellent Switch versions. Kingdoms of Amalur on Switch appears to run at or near a full 1080x1920 docked and likely a native 720x1280 when handheld. Image quality in both configurations is outstanding, barring the occasional pre-rendered cutscene carried over from the original release. Performance is generally good when playing handheld though when playing docked I did have a few instances of prolonged frame rate drops. Unfortunately, unlike the above-mentioned Kaiko-developed remasters, Kingdoms of Amalur does not include both a graphics and performance mode on Switch. An option to drop the docked resolution in favor of a more stable performance would have been a great addition to this version of the game. As is, it’s entirely playable and looks great, but performance while docked does leave something to be desired. Similarly, sound quality is very highly compressed, which becomes very evident when playing on a TV with decent speakers. This is a shame as Grant Kirkhope’s excellent score deserves to be heard in its full glory as it’s honestly some of his best work.