Nintendo World Report, or at least its forums, has a storied history when it comes to social deduction. We have an entire subforum dedicated to Mafia which has a wild and woolly archive of games. And when the social deduction RPG Gnosia was announced for localization in last December’s Indie World show, it jumped pretty high up my intention list. Yes, even ahead of the 900 pound gorilla of Among Us that got announced ten minutes later. The end result is something that it’s easy to go overboard with, but something that’ll stay in the Switch’s memory in between sessions of sus.

Gnosia is a series of repeated rounds of social deduction as your self-named character joins the crew of a spaceship who are trying to escape the titular Gnosia. This group of aliens impersonates humans in an attempt to kill them, and the ship’s computer will shut down life support if it’s found that the Gnosia are a majority of the people standing on the ship. The first game starts small - one Gnosia, five people including yourself - and after a round of discussion, all the people in the game vote on who should be placed into “cold sleep”. A plurality of votes is all that’s required to put someone to sleep, with the possibility of multiple rounds of voting in the event of a tie; if there are an even number of voters and the vote ends in a tie, the question will be posed whether to sleep all or none of those involved. After a brief scene the Gnosia have an option to kill a player, and then the process repeats until all Gnosia are voted out or reach the majority of those left. As the game repeats, more modifiers come into play with members of the crew who serve as “engineers” (check someone to see if they’re Gnosia or not) or “doctors” (confirm or deny if the person voted out was Gnosia), as well as “guard duty” (two humans who vouch for each other not being Gnosia). The Gnosia and one shipmate who tries to help them win (a “cult member”) can impersonate a doctor or engineer to cast doubt, and later one player serves as a “bug” who allegedly destroys the universe if they’re on the winning crew. After a few repetitions you’ll have a crew of 14 other members, and can lock yourself into a role or just serve as a crew member and avoid suspicion. It sounds more complicated than it is; after a few tutorials it’ll be possible to run through an entire game in 10-15 minutes depending on your reading speed.

The reason it’s possible to go through a game so quickly is due to the major sci-fi element: each game is the result of a stable time loop. There’s upwards of 150 loops in all, and I found myself spending a lot of time on the selection screen for a crew count / role once it was available.

GIVE IT UP FOR LOOP 15 #gnosia #PLAYISM #NintendoSwitch pic.twitter.com/sZXG4Sbkq2

A lot of the game’s difficulty stems from having to work around some characteristics of the other people stranded on the ship with you. There’s a few people who it’ll be incredibly difficult to vote out during the early parts of the game, and getting additional information (by way of being a doctor or engineer) just paints a target on your back for getting taken out in between voting rounds. The most commonly used button I found in most rounds was referred to as the “wait and see” button but it’d be more accurate to call it the “stay clam” or “shut up” button. I found that although it was kind of interesting to play as the bug or the Gnosia, there wasn’t really a point to playing as a member of the Gnosia-loving cult. Sure, I could make up stuff, but most of the time people saw through me.

The original description of the game was a “visual novel RPG”, which is true to an extent. An experience point system exists, with the game awarding big point bonuses for winning and smaller ones for surviving a round. These points are taken back to your character’s quarters where they can be placed into six different stat categories. Certain abilities are unlocked during the course of a round either during the discussion phase or in between discussions by talking in another room. There’s room for plenty of skills, but some of the ones I unlocked early required me to basically treat every stat but one as a dump stat when I needed all of my stats high enough to survive. 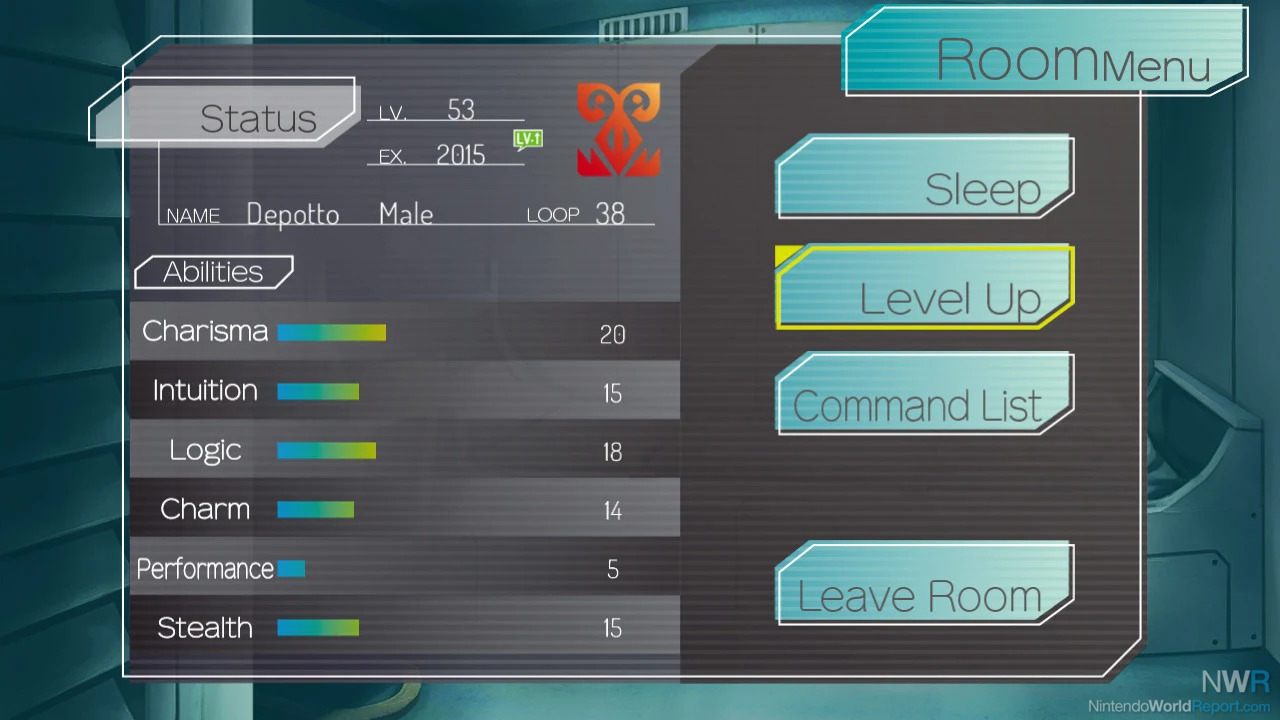 Let's go inside the numbers.

By its very nature, Gnosia isn’t going to have a lot of graphical variety. There’s the fourteen other crew members with some interesting character designs. One character doesn’t speak at all, one is an aquatic creature (still considered “human” for the purposes of the game) who wears a literal fishbowl helmet, and there’s a couple of characters that are non-binary. Although there are roughly fifteen areas on the ship to see in between rounds (including a shower and yes, you do walk in on female characters), you’ll probably see all of them relatively quickly and the meeting room will get old FAST. For those concerned about violence, it happens entirely off-screen and there are no Danganronpa-style executions that I could see. The music isn’t much to write home about: the song used for discussions will get old quickly, and the in-between one is a little annoying. There’s also no voiceover, probably because having to voice multiple variations of the same quote for fifteen characters would take forever to record. On the technical side, the text was adequately sized but as a somewhat quick reader it’s the first time I’ve had to turn the text speed DOWN for reading purposes. It’s especially bad with the game’s opening.

If you can read this without pausing you're a better speed reader than I #gnosia #PLAYISM #NintendoSwitch pic.twitter.com/9sZ5rgW8wj

Gnosia is a game that’s going to test your deduction skills, imagination, and ability to lie like a cheap rug. It’s a game that I will definitely keep around if I want to knock off a quick loop on a break, or even if I need to warm up for the next time I have tasks to do on stream. Don’t cold sleep on it.

A review code was provided by Playism.

But the opening text was meant to be too fast to be able to read. It's done on purpose.