Energized super ball is now in your hands!

Glyph is a 3d platformer by Bolverk Games, a small Danish startup studio who claim to gear their games towards mechanics that are easy to learn and hard to master. Does this skill-focused platformer unearth a hidden gem from the Switch's library or should it fade in the sands of time?

You start your journey being resurrected by the last remaining member of your civilization (Anobi) who urges you (Glyph), a small robotic beetle, to restore the ruins and end the corruption that has befallen the Heart of Creation, the source of energy for your people. Immediately you're dropped into a brief tutorial where Anobi teaches you movement abilities. In Glyph's basic state, it is nothing more than a ball that can roll around, but by the end of the tutorial you're given your remaining skills to open things up. Those consist of a jump, dive (this ability propels you straight down to the ground) and a glide in which you expand your wings and hover for a period in your beetle form. You need to use these abilities in harmony in order to traverse the deadly sands by which the ruins have been engulfed. 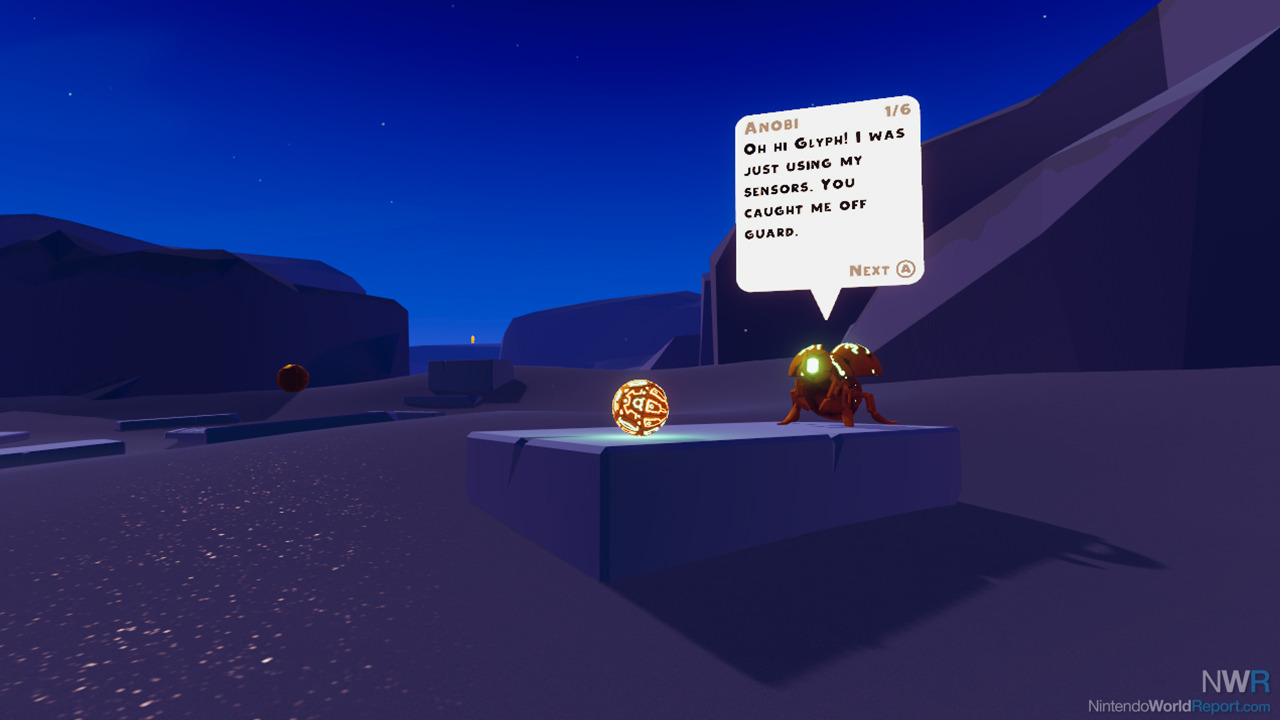 And traverse them you must because it appears that Glyph is deathly allergic to sand, causing it to explode on impact. It's a bit of a "floor is lava" situation, and the key to your success is using your abilities properly to carry momentum and get good ricochets off interactable objects in order to reach each level's exit. There's a number of collectables you'll be picking up along your way: Coins, Gems, Keys, and Golden Scarabs. You’ll be using each of these in the hub world where you unlock sections of the ruins that house additional levels, until the grandeur of your civilization is fully restored. Coins unlock new levels; Gems unlock new sections of the ruins, making additional levels accessible. Keys, on the other hand, must all be collected in any given stage to open a portal to the exit. Scarabs are a unique currency that similarly unlock specific stages; however, the trick to the scarabs is that you need to collect every single coin in a stage before you can pick them up. It sounds like a lot to collect and doing so without dying would be grueling to say the least. Thankfully your collection of gems and coins persists between deaths so long as you complete the stage and don't just quit out to the hub world.

There are over 80 levels ranging from a Skull difficulty rating of 1 to 5 for you to bound your way through, consisting of two game types: exploration and time trial. In exploration, you collect the above mentioned trinkets at your own pace and solve the puzzle of the level. Time trial is a race against the clock. You still need to collect keys in this game mode to exit the stage, and doing so quickly will net you a bronze to gold ranking and 1, 2, or 3 gems as a result. 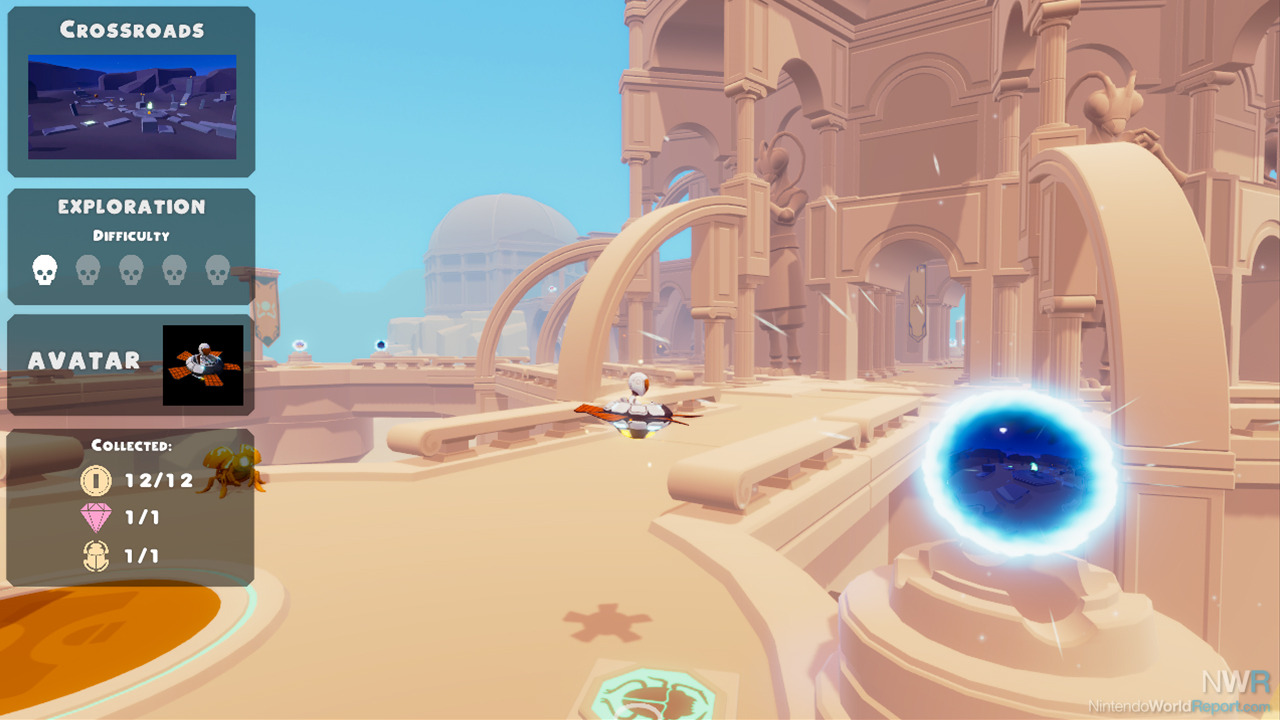 The geometric playgrounds each stage provides are enjoyable and offer some variety. Some are imaginative with skyscrapers and sentry robots, whereas some are downright brutal. A particular time trial stage comes to mind with sparse pots as your only solid footing and the first introduction of hidden spears that emerge from the sand. I’m definitely not a fan. Unfortunately, a number of the more uninspired stages can feel more menial than anything, but those are infrequent enough that it doesn't detract too much from the overall package.

Something I found as a really nice inclusion that made every stage more intriguing is the fact that Glyph is one of the few games in recent memory that has a huge number of unlockable cosmetics that aren't restricted by any paywall. Every stage has either a full character skin or a trail (think exhaust streak) that comes off Glyph. Unlocking them is one of the best aspects of the game. In every stage, you'll find Anobi tucked away somewhere (usually in a relatively obvious spot) who will give you a hint to the location of a secret in the stage. These always manifest themselves as a giant yellow switch that when struck will unlock a new section of platforming elements to the stage that bring you to a cosmetic collectible you then need to take to the exit with you to unlock. 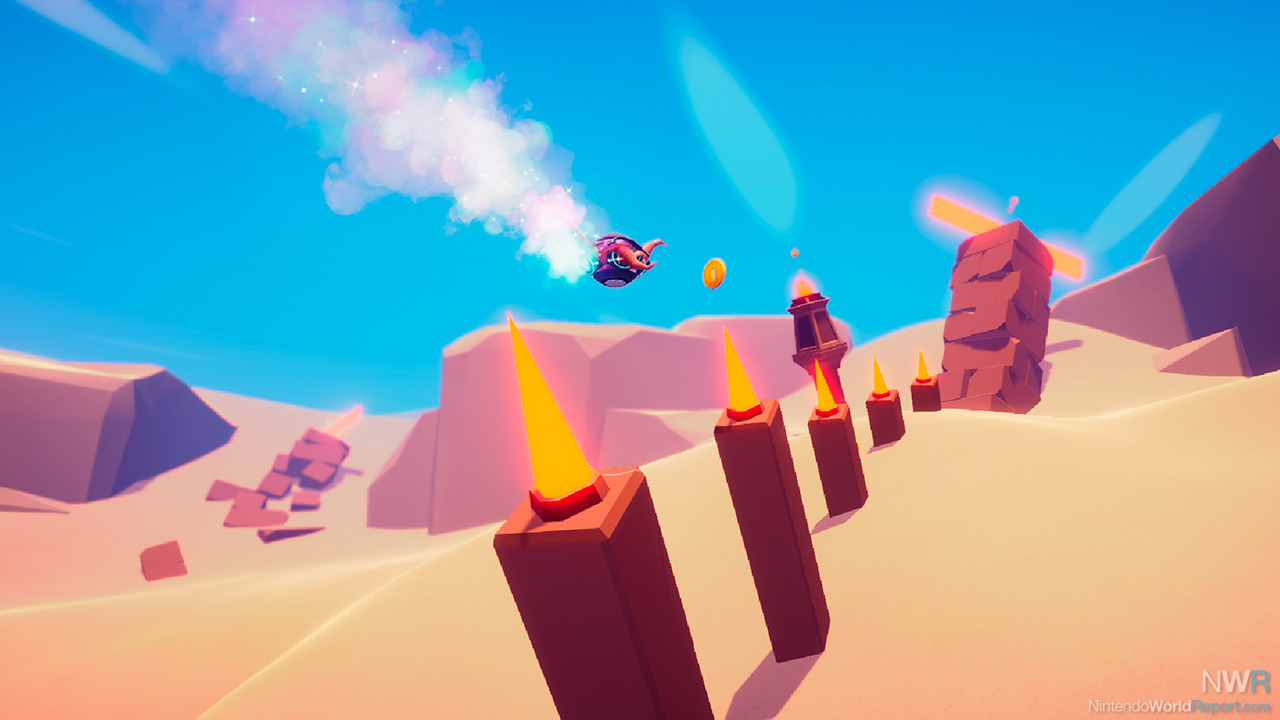 Graphically, Glyph isn’t always a looker. Simplistic geometry and shading are more functional over aesthetic, but that's not to say Glyph doesn't carry a style of its own. Some of the later stages are quite striking with unique lighting, monolithic structures, or creatures that offer some nice visual splendor, but they are definitely not commonplace. On the technical side, my time with the Glyph was overall very positive with only an odd frame drop in very rare situations, nothing gameplay impacting. And I'm happy to say that good performance carries over into handheld mode, which this game feels great in. Lastly, while there isn't a tune I could hum off the top of my head after my 15 hours with the game, the audio does kick in when you gather a new collectable and adds to the excitement of progression through each stage.

Glyph is perfect for a 15-minute pick up and play session or something you can struggle with for an hour. It's a rewarding experience when you have mastered its controls. Soaring through the sky to the exit like a golf ball in flight is a satisfying feeling. Its difficulty spikes can be dramatic, but if you're up for the challenge and craving some 3d platforming this one is worth a look.