Peeling back the fabric of reality is now on Switch.

Weather Factory’s cult-hit Cultist Simulator has finally brought lovecraftian horror mixed with business management to the Nintendo Switch with the Initiate Edition. The roguelike, deck-building game tasks players with falling down the rabbit hole of occult mysteries, gathering a flock of followers, and bringing glory—or ruin—to their new cult. On the way to enlightenment, there will be investigators to handle, rival cults to stamp out, and many treasures to find.

Playing Cultist Simulator centers around moving cards. It first released on PC with a very intuitive way to move cards around (keyboard and mouse), but the Switch doesn’t really have that. Weather Factory developed three ways to move your deck around: a button layout, a joystick controlled cursor, and touch controls. Generally, these all work okay. The easiest way I found was by mixing the button layout with seldom use of the cursor. There were times when I wouldn’t know how to move the focus to certain cards with the buttons, so I would use the cursor to select them manually.

You move the cards in your deck to action slots. These consist of various verbs like Dream, Work, Explore, or Talk. The first verb for every character is Work. This sets up the day job for the chosen character, which is the primary way to earn Funds. Their day job also sets up how their interest in the unknown is piqued. A doctor will randomly remember a patient who was talking about worlds beyond view, or an inheritance will include strange journals or diaries. As that character's story opens up, so will the amount of verbs a card can be used with. Eventually, six verbs will open up in total. 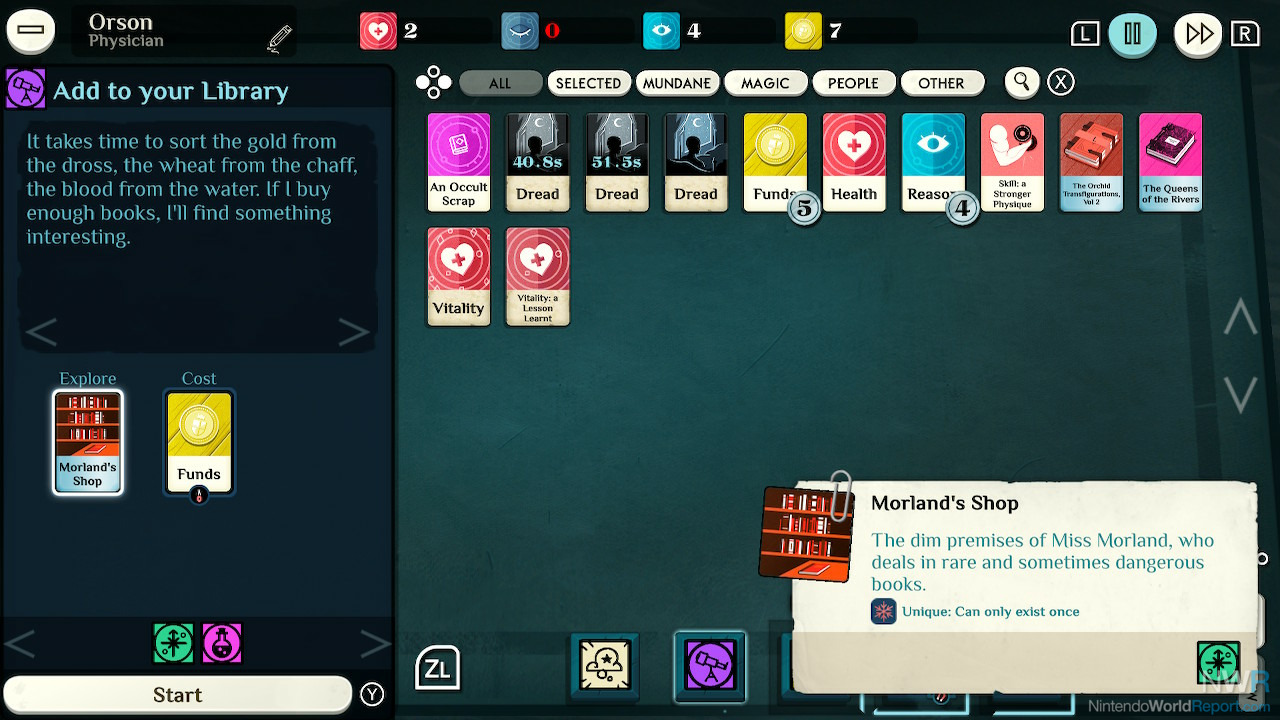 The various uses a card can have with those six verbs is quite impressive. Meeting a character while exploring will add their character card to the deck. That character can be used with Talk for them to give you work contracts, Study for them to teach you a skill, or you can Explore a specific location with them to open up side objectives. That doesn’t only apply to character cards; Tools, Followers, and Lore Fragments all have numerous amounts of uses. There are cards that can only be used in one area, but each time I encountered that situation it made sense to me why that was the case.

The challenge of Cultist Simulator is that each action and most cards have a countdown associated with them. Playing a Follower with the Explore verb to wander the city means that Follower and Explore are both locked off for 60 seconds. If you suddenly need that Follower to destroy evidence or need Explore to create a specific card, you won’t be able to until that action is finished. Cultist Simulator is a balancing act of creating cards when you need them while also progressing toward an ending. Studying occult mysteries will take time away from protecting yourself from certain status afflictions like Trembling in the Air. The cards that protect the player from status afflictions also have a countdown before they disappear, so hoarding protection cards is impossible. All of this adds up to a frantic yet measured gameplay loop that is compelling to spend time with. I would sit down to play Cultist Simulator then find out that two hours had gone by before I knew it. 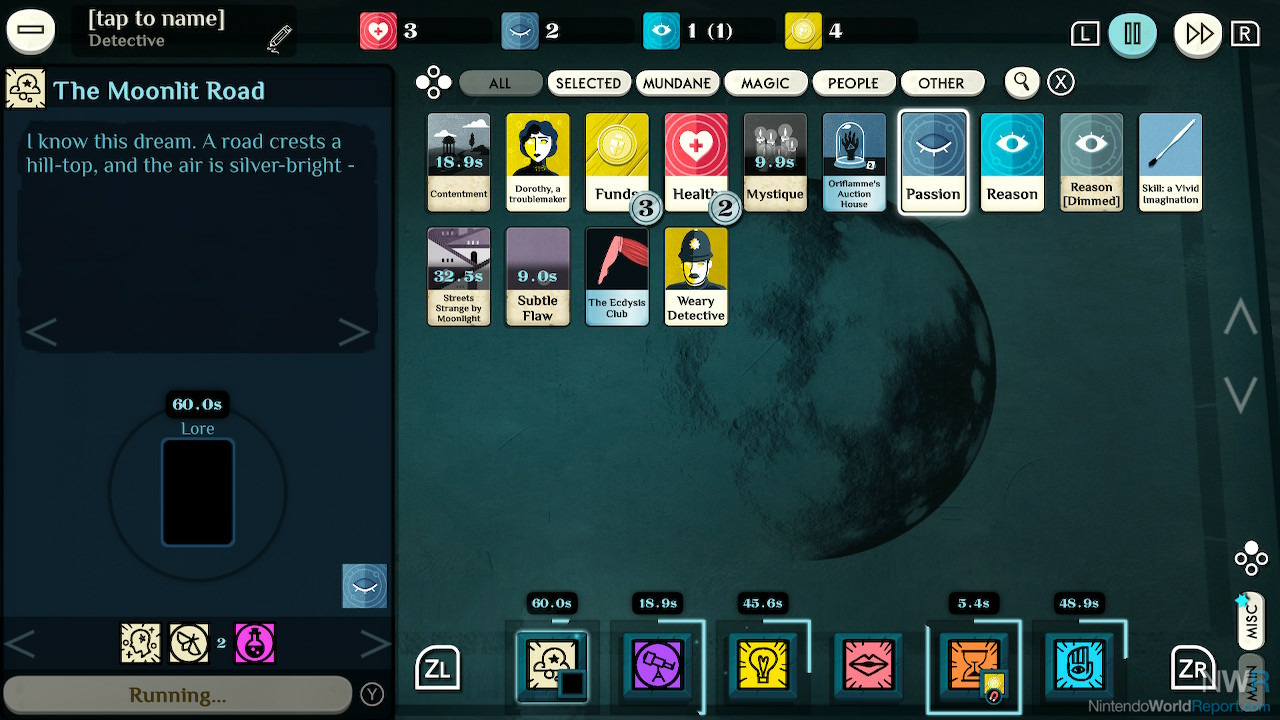 The type of balancing act that Cultist Simulator requires lends itself to unintentional hilarity. One of the stats cards in the game, Health, can be changed into An Affliction if you become unwell. If left untreated, that Health will be lost. Treating An Affliction can be done with the Dream action by combining it with a vitality and extra funds. Since I’m bad at juggling cards, I was woefully unprepared for changing An Affliction back into Health. One way around this is by using a card in an action as it will pause the countdown timer for that card. Around the same time I had recruited a new Follower, Leo. Bright-eyed and eager to delve into the depths of the invisible world, Leo was unfortunate enough to be responsible for how I paused the timer on that particular Affliction. Leo’s first three turns as a believer were spent not participating in ancient rituals but instead talking to his boss about how his tummy hurt.

There is plenty of time for these unintended moments because each run is incredibly long. It’s easy to play Cultist Simulator for several hours and not make much progress. Part of that is caused by the low amount of instruction available in game. Not everything is a mystery here, but experimenting with card combinations was an intended focus from the developers. This does mean you’ll frequently have the feeling of spinning your tires while trying to figure out what to do or have to struggle through a few preventable deaths that feel unfair. My first few runs ended with my character dying to status effects that I didn’t know how to cure, the second of which saw my character lost due to accumulating three Fascinations. Cultist Simulator does say that spawning Dread or Fleeting Thought cards will stop this occurrence, but I didn’t know how to—and kind of still don’t—spawn them. Eventually, things become less mysterious as you put hours into the game, but getting there can be frustrating. 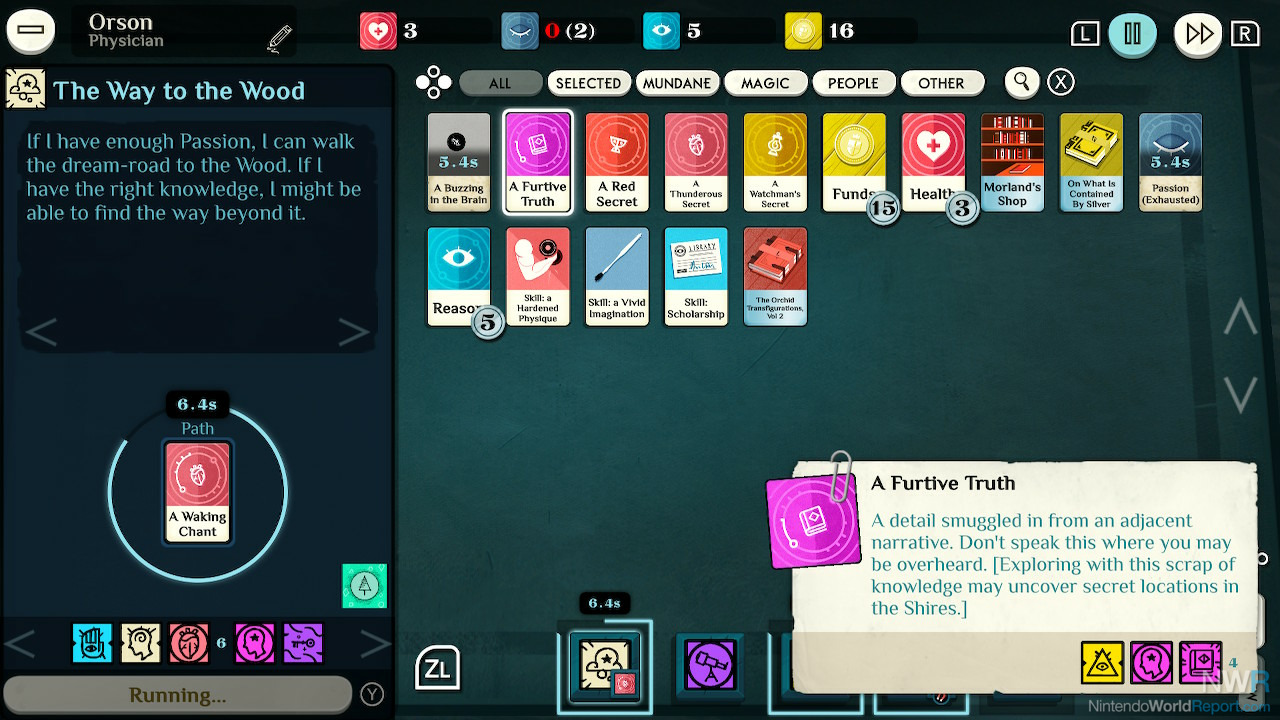 Another aspect of the long runtime is due to progress toward some victories being very slow. A normal victory would be by ascending various Way cards then performing certain rituals. This involves crafting higher and higher value Lore Fragments, which is done by combining two of the same or similar Lore Fragments and by acquiring victory specific cards. What cards the game gives the player is random, however. Eventually the ability to progress in one of the first ways possible will slow to a crawl that involves watching countdown timers tick down. There is a save and resume later option available, but Cultist Simulator has the potential for the longest individual run time of the roguelikes I’ve played. The length of a run can be doubly devastating since it’s possible to spend the good part of a week working on a victory then lose in the last moments.

The artistic trappings of Cultist Simulator are a mix of highs and lows. Quickly touching on the music, it’s basically background noise. The OST doesn’t really stand out and it faded to silence once I got into the groove of actually playing the game. Visually, though, the game is beautiful. Each card has a lovely piece of minimalist art with pops of color acting as a highlight and as a little hint to each card’s function. Collecting books about different bits of occult knowledge is a big part of the game, and knowing which subject a certain book will be about is explained by their color. The Knock principle is represented by purple and Forge is represented by a muted scarlet. Outside the cards, the game has a lot of unused space. The background is often empty, and Weather Factory rarely takes advantage of the real estate. Occasionally, a bigger drawing will pop up to signal an important event happening, but most of the time it’s left empty. It feels like such a waste since the other pieces of art in Cultist Simulator are fantastic. 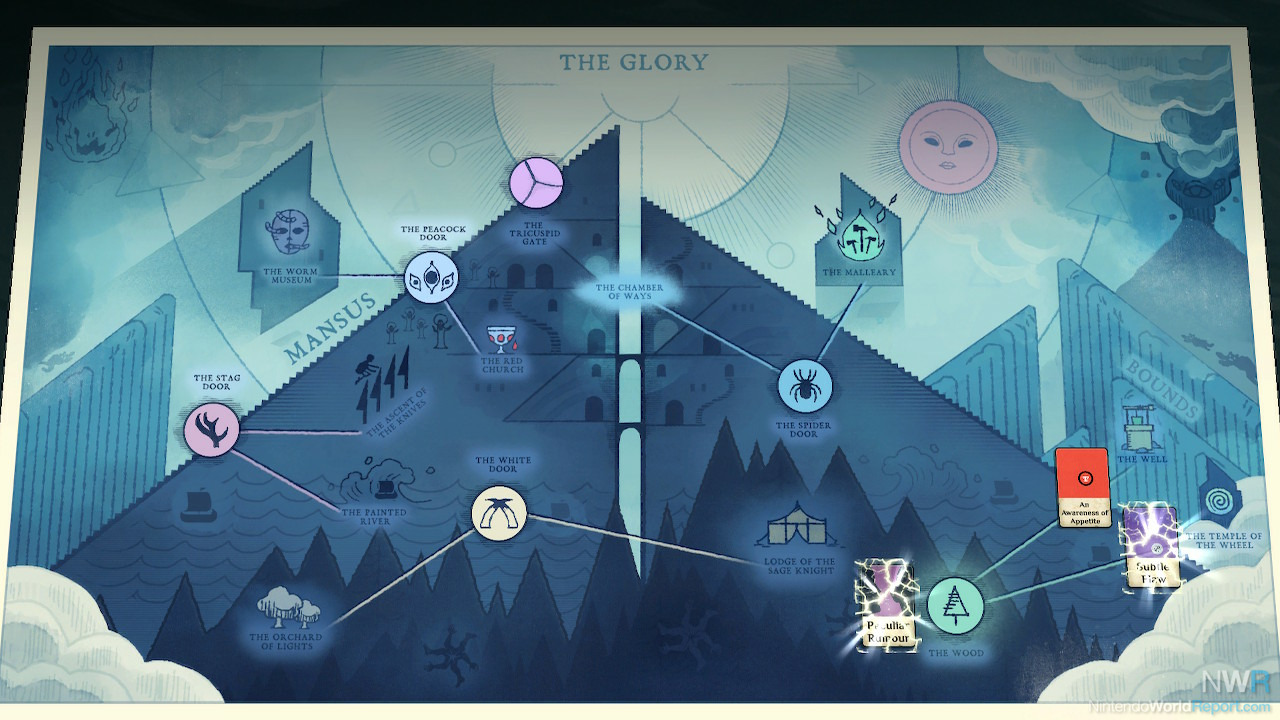 Cultist Simulator: Initiate Edition is a neat little package. Weather Factory made an effort to be sure it would control well enough on the Switch. All three of the game’s previously-released DLCs are included, too: The Dancer, The Priest, and The Ghoul. The new characters and mechanics of the DLCs are available upon starting the game. Overall, the game also runs like a dream. The kind of care to give Switch players an experience as good as other versions is really nice to see. I do have problems with the gameplay, like it being obtuse at first or the overall length of a run being way too long, but in the end, I enjoyed my time with Cultist Simulator.