A potent Atelier concoction that should appease long-time fans and might win a few more.

With more than 40 Atelier mainline games and spin-offs (10 of which are on Switch), the series and its trademark mechanics, focus on crafting, and light-hearted storytelling have garnered a dedicated following. For those who have never played one, Atelier Ryza 2: Lost Legends & the Secret Fairy might be a very good place to start. Even if you never played the first Ryza game or bounced off it like I did, the sequel features a snappy fast-travel system, optional automatic crafting, and helpful signposting. The story takes a long while to get going, but there’s enough charm to go around before that happens, in addition to solid performance on Switch.

Taking place three years after the events of 2019’s Atelier Ryza: Ever Darkness & the Secret Hideout, Ryza 2 sees the titular, plucky heroine arrive in a metropolis known as Ashra-am Baird. For a girl from a small town, the big city brings major changes, but as luck would have it, Ryza ends up running into many familiar faces, like Klaudia, Bos, and Empel, while also making new friends along the way. It’s an invitation from Tao, another friend who has matured in the years since their last meeting, that beckons her to the city, and it’s his research into mysterious nearby ruins that serves as the impetus for the whole adventure. In fact, the meat of the game is exploring what turns out to be a series of ruins that hold secrets about ancient peoples and their history. Another narrative device driving the plot forward is a furry fairy creature whom Ryza names Fi, and it’s up to Ryza and her pals to discover more about Fi and his connection to the ruins. While the story does enough to see you from the beginning of the game to the end, it doesn’t really come together until the eleventh hour, mostly because it’s easy to get lost in the minutiae of side quests.

Exploring each of the ruins, which essentially amount to dungeons, takes on a clear pattern. After an initial walkthrough, you’re tasked with completing basic tasks like opening treasure chests, collecting resources, or defeating enemies to activate a magical compass. After doing so, you make a second pass of the dungeon to seek out glowing yellow, blue, and red lights that allow you to open up a final path in the dungeon and also fill out exploration cards for special bonuses, like points to be spent on Ryza’s skill tree. The different ruins are distinct enough that the loop isn’t tedious, but the severely lacking enemy, mini-boss, and boss variety puts a damper on the process.

Back in the city, Ryza can visit various districts and the shops and NPCs therein. She also has her own atelier studio where she can use her cauldron to craft dozens of ingredients, consumable items, and equipment. You may want to play interior decorator by purchasing new furniture and household items for the atelier since you’ll be returning so frequently. Many story beats, be they main quest or side objective, take place here. A blue slime creature called a Puni eventually makes its way to Ryza’s abode and can be given food to send it on excursions, with the reward being a handful of goods that improve as the Puni gains levels. Not like you need the extra items; the most common activity in the game is harvesting materials while out travelling. 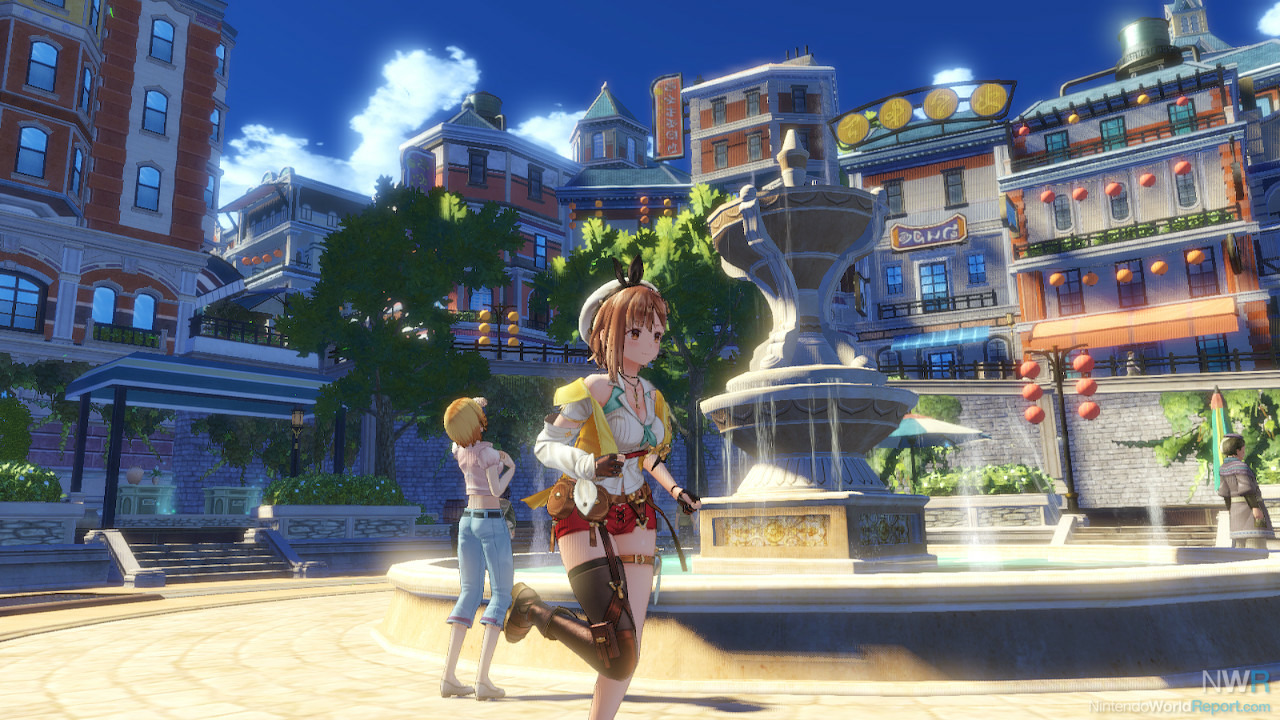 Almost every one of the game’s 30 or so environments is chock full of plants, rocks, insects, and many other types of ingredients to use for alchemy. In the atelier, Ryza combines these ingredients to make healing medicines and bombs that can be used in battle, story-specific items needed to progress, and foods and other objects to give to NPCs. Initially, you can only gather from certain spots by using your hands or swinging your staff, but you can also craft an axe, a bug net, and a fishing rod, among other things, to harvest other ingredients from more places. One issue is that eventually your basket fills up and you need to return to the atelier to drop off your spoils, and in my playthrough I didn’t encounter any way of expanding the size of the basket. Not that it’s small, but it would have been a nice upgrade to work towards.

The combat melds turn-based with action commands in a unique hybrid, not entirely unlike Final Fantasy VII Remake. Smacking an enemy on the overworld or running into one initiates battle, and from here a gauge fills as you wait to act. When you do, you can use a series of basic attacks, up to three for Ryza but more for other characters, to earn Action Points that are shared by your party of three and spent on skills. During your turn, you can throw out a few basic attacks with the A button and then hold down R to see your skills, each assigned to a different face button and costing a set amount of AP. At certain moments, your teammates can call for a physical or magical attack, and indulging them with the right skill prompts them to perform a follow-up move for extra damage. Each character can also use a series of items as long as they’ve been equipped beforehand. Skilled item creation in the atelier is basically a requirement for taking down some of the more challenging bosses. 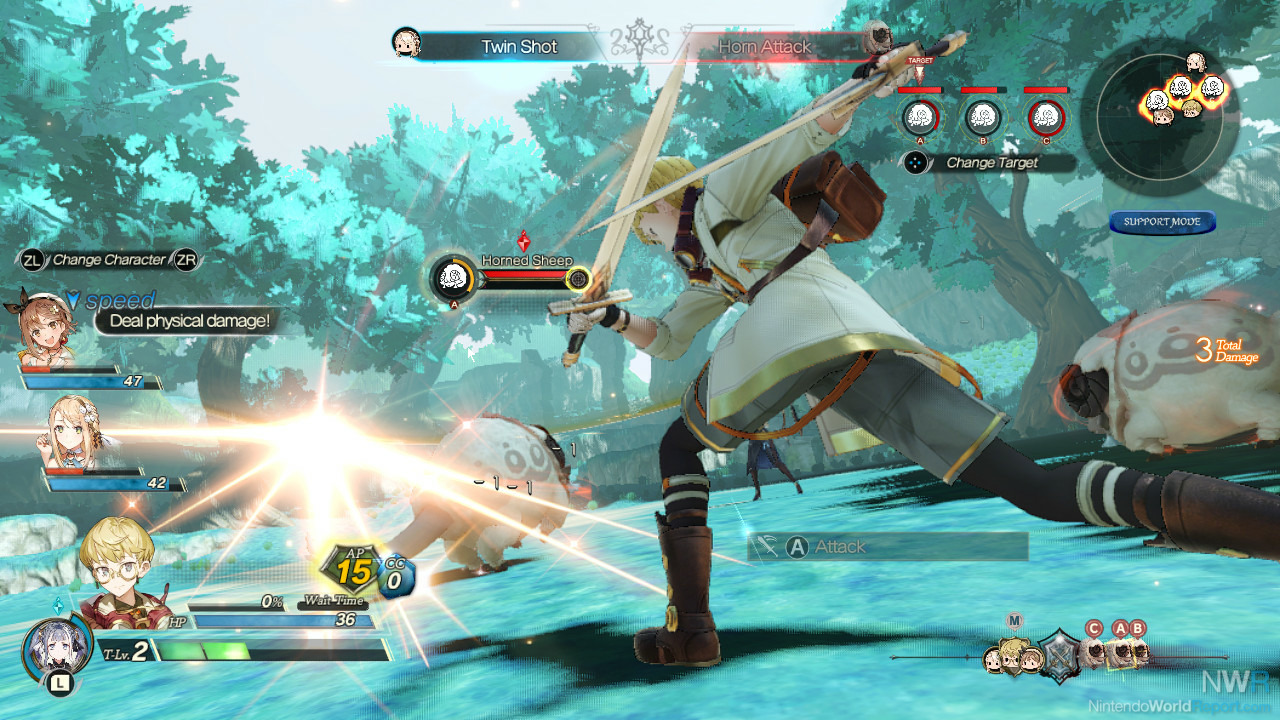 As the game goes on, new features are added to combat, like a fourth character who can be subbed in and tagged in for a special attack, as well as super moves that require another gauge be at or near its maximum. This is the Tactics Level, which starts at one and moves up to six, and dictates also the limit to how many AP you can accrue. For example, at Level 2, you can have up to 15 AP, and any further basic attacks won’t add to that total until your Tactics Level goes up. You can achieve this by pulling off combos and chaining skills together. Exhausted yet?

Generally, you only control one character at a time, but you can switch between them and give each one a specific enemy target, too. Individual skills can also improve/evolve over time, meaning you can pull off stronger versions by repeatedly activating them during your turn. Ryza’s Blaze Rush skill, for instance, can power up at least twice to Blaze Rush++, which adds fire damage and also reduces fire resistance. One downside to the combat is that all of the numbers and indicators are small and hard to read, meaning it can be pretty tricky to know exactly what’s happening when it comes to the more minor details. Other than this, the combat UI works well enough. 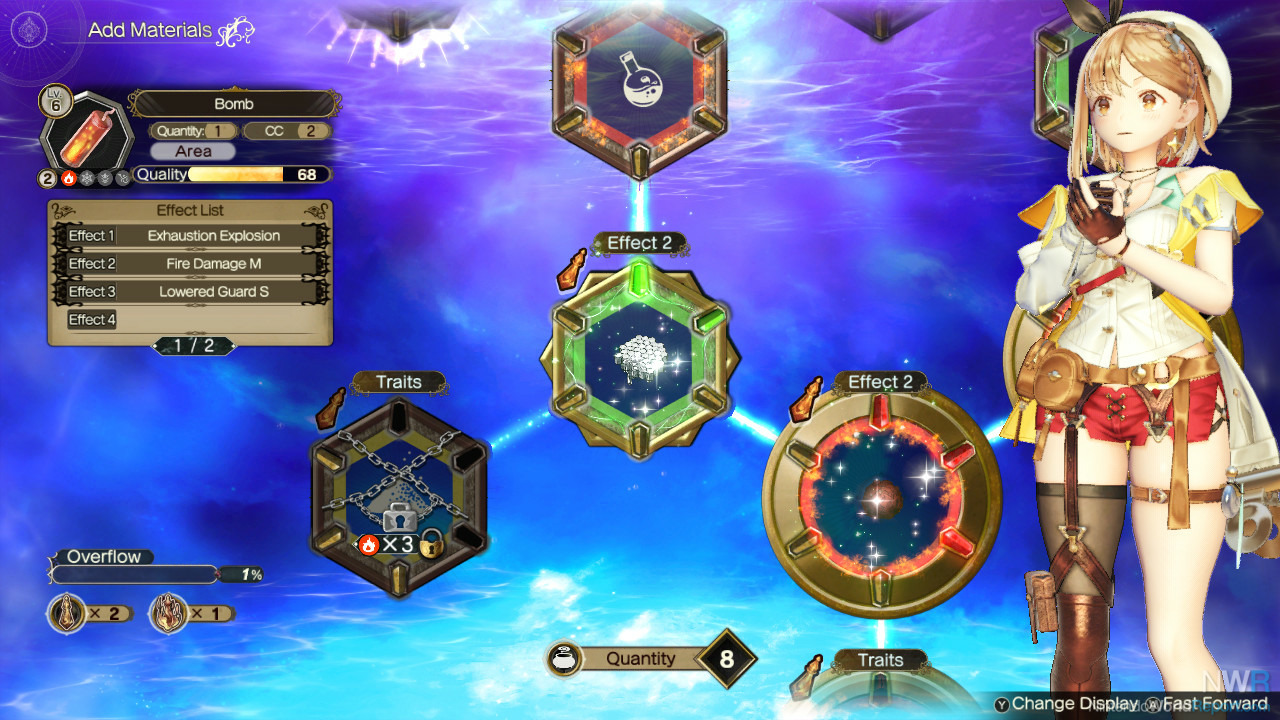 The crafting UI is among the best it has ever been, and the addition of an auto-crafting mechanic whereby you can choose whether you want a low quality or high quality item is brilliant, especially early on and whenever you’re just giving the fruit of your labor to one of the cityfolk. There’s a clarity and flexibility that helps new or less experienced players wade through all of the details and information built into the crafting, and of course it’s this depth that long-time fans are probably happy to see more of. The more time I spent with it—and I thoroughly recommend carefully reading the in-game guide—the more comfortable and satisfied I felt with the crafting process, but there were a few late-game situations where I really had to search high and low for rare materials needed to progress the story.

Aesthetically, the music adds much more to the experience than the visuals. The soundtrack makes for pleasant travelling, but it would have been nice to have English voices as an option given the amount of dialogue. Certain elements of the world, like rain, are downright ugly. The game also tries to make certain characters appear in focus and others out of focus, and in a large number of scenes, the appearance of an out-of-focus character is laughable. Fortunately, the world is filled with color, and most locales have a distinct appearance that helps push away some of the repetition of the gameplay loop.

The main story of Atelier Ryza 2: Lost Legends & the Secret Fairy takes upwards of 30 hours to complete, but filling out the item and monster guides and seeing your way through every companion’s individual stories will add a dozen or more hours to that total. Three initial difficulty modes, in addition to two unlockable ones, let players tailor the experience, and a paid season pass promises to add costumes, recipes, and new areas to explore. The slow beginning of the first Ryza game is remedied somewhat here, and the ability to fast-travel from anywhere to almost anywhere else is pure bliss. The story’s lighter fare, doubly so for the side quests, won’t appeal to everyone, but the solid battle system, intuitive but deep crafting system, and decent overall gameplay loop were all enough to hold my attention and then some. Even though the concoction might not have come out perfect, it absolutely Ryza’s to the occasion.

I was hoping the performance of the Switch port would be okay, and it looks like it is judging from the video review!

I was hoping the performance of the Switch port would be okay, and it looks like it is judging from the video review!

Thanks for reading! Performance certainly didn't seem like a noticeable issue for the Switch version.

Even though the concoction might not have come out perfect, it absolutely Ryza’s to the occasion.

Puns aren't appreciated in writing nearly as much as  they should be!

Puns aren't appreciated in writing nearly as much as  they should be!

I might have come up with that one before I even started writing the review!