Look into your hard drive and open your mercy file!

Developed by Flow Fire Games, SYNTHETIK: Ultimate transports you into a brutal alternate reality 1985 dystopia. In this top-down, twin-stick roguelike, humanity has its back against the wall against the unceasing onslaught of self-learning machines. That's right, it's a typical Skynet situation, and it's going to take the strength of what I can only assume are legions of Alex Murphy's long lost cousins to save the day. You have the option to choose from eight playable classes, ranging from the tankier Riot Guard, sneaky cloaked Assassin and even a turret deploying Engineer. Your prime directive is to prevent Armageddon. How? Climb the tower, find the "Heart of Armageddon," and destroy it.

Just like in most roguelikes, a number of elements are procedurally generated. Levels, weapons/upgrades and shops are all randomized with enemies spread out anew with every run. I've not played too many entries into the genre, but I found myself enthralled with this gameplay loop. The temptation of "just one more run" was all too real, and I was excited to see what else I would find in my next attempt. 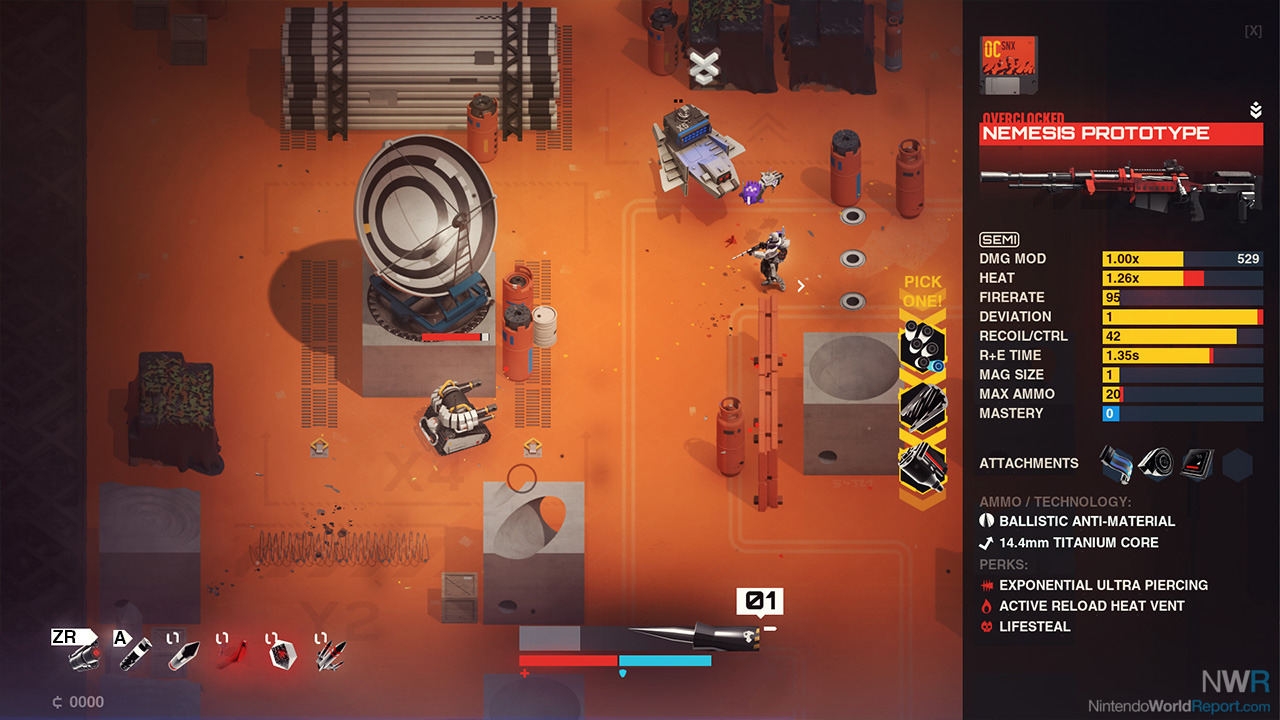 However, I am quite familiar with twin-stick shooters, and even still this game can be brutal. Controls are a challenge to get used to. Each weapon has a unique active reload you will be learning on the fly alongside potentially different ammo types to cycle through that have varying effectiveness. In addition each class starts with at least one dash and usable item. As you collect more items the number of face buttons begin to dwindle and you’ll be pressing combinations of ZL+B, A, Y, and X. It's a little messy but it works. Be prepared for a learning curve and to struggle with the clunky UI and controls. Here’s a tip: upgrade outside of combat. SYNTHETIK: Ultimate has a variety of mechanics that help add a bit of additional strategy to the standard run and gun affair, one of which is threat level manipulation. You have the option to raise and lower the threat of your next stage to curtail your difficulty and rewards. In addition to threat level manipulation, there are also items and weapons that demand a sacrifice. Selecting these ominous red chests will often bring down your health within an inch of death. Take these powerful upgrades at your own peril. When you die, your XP is totalled and you unlock further passive abilities to discover for your specific class on your next run, which makes sticking to a class feel rewarding.

I'm a bit saddened to say that the game has a hidden boss, one that no amazing drops or perfect runs can defeat: technical issues. The Switch version is currently plagued with some that range from minor annoyance to utterly game breaking. Slowdown is common and can happen when battle gets a little too hectic, which is never fun. But what actually ruins the game and leaves me unable to recommend it until the problem is fixed is its severe crashing issue. This happens at the worst possible time, too: right when you get to the teleporter to take you to the next stage. Now this does not occur 100% of the time but the majority of my attempts ended in the game crashing and not me getting killed. There's nothing more deflating than clearing a tough stage, getting lucky drops and nice upgrades, only to have your game crash. If the game's official subreddit is to be believed, it does seem like the developers are actively trying to get a patch that addresses this specific issue through certification. So hopefully it's not too long of a wait for it to be fixed. 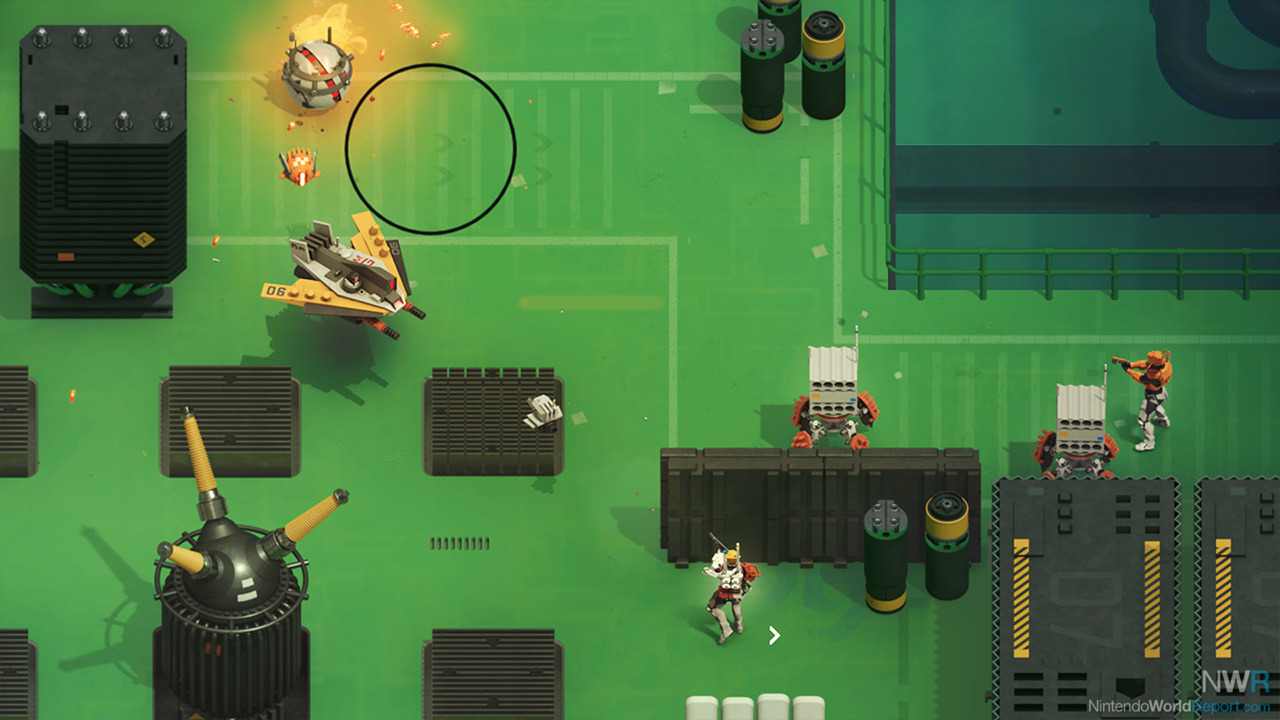 There are two other listed game types in SYNTHETIK: Ultimate, oddly with the same description of "Compete in trials of Zir, beat all the challenges," but as they stand, these are wholly dismissable. One labeled Arena appears to be a demo of an intended game type where you receive powerful upgrades at a more frequent pace. But it's only a single stage as of this review. The other is called Firing Range. Here you only get two weapons to practice with. If there was an option to choose any of the available weapons to test run, I could see the value of this mode. As is, it only served to get you used to the controls, which you might as well do in the main game mode. Another head scratcher, some item drops contain descriptions geared towards multiplayer. An example of this would be an item called: Lifeblood. Its description reads “Hitting enemies and all fired bullets grants lifeblood charges which can be consumed to heal all team members.” The issue is that the Switch version of this game is single player only, unlike its PC counterpart. It would have been nice for these drops to be modified to reflect the single-player focused Switch version.

I do hope to return to SYNTHETIK: Ultimate one day when these issues are addressed and additional content added. The game is packed with options and at its core is a very fun experience marred by a lack of polish and technical issues. I still found myself rooting for this game when I would find hidden record players that would kick on fantastic techno beats to galvanize my robot scrapping pursuits. All the guns feel and sound unique, and it's a real joy to find a rare drop, upgrade your character, and unlock new passives for your class. Hopefully in a few months’ time, this game will be an easy recommendation for fans of the genre as it has the makings of a hidden gem in the Switch’s library.