The legend of Jorj: Slaughter Tracks

Grindstone garnered significant buzz in 2019 as both a great puzzle game and a showcase for the then-new Apple Arcade service. The battle-focused, color matching game was well suited to phones and tablets because of the touchscreen interface and the bite sized levels that let you take progression at your own pace. As the viking Jorj, slaying monsters and collecting the spoils is all there really is to the premise, but that’s largely unimportant for the kind of game Grindstone is.

Gameplay is pretty straightforward; each level is a board with tiles across them. Tiles are populated by enemies of varying colors. In every turn, you draw a path through lines of same-colored enemies that you can only hit once. After finishing your line and hitting go, Jorj proceeds to slice through each with his sword and lands on the last tile. If a long enough chain is recorded, gems will drop on the ground that can be used in the following turns to let you chain together an additional color enemy. Some levels also include hazards, breakable wooden boxes and boulders, and powerful enemies that you need to build a high enough chain number before landing on their tile space to cut them down. If Jorj is set on a tile adjacent to attacking monsters, he loses one of his three hearts. Levels have win conditions such as killing a set number of enemies or defeating specific monsters, and each level has additional rewards for killing specific enemies or gathering chests that fall at the end. 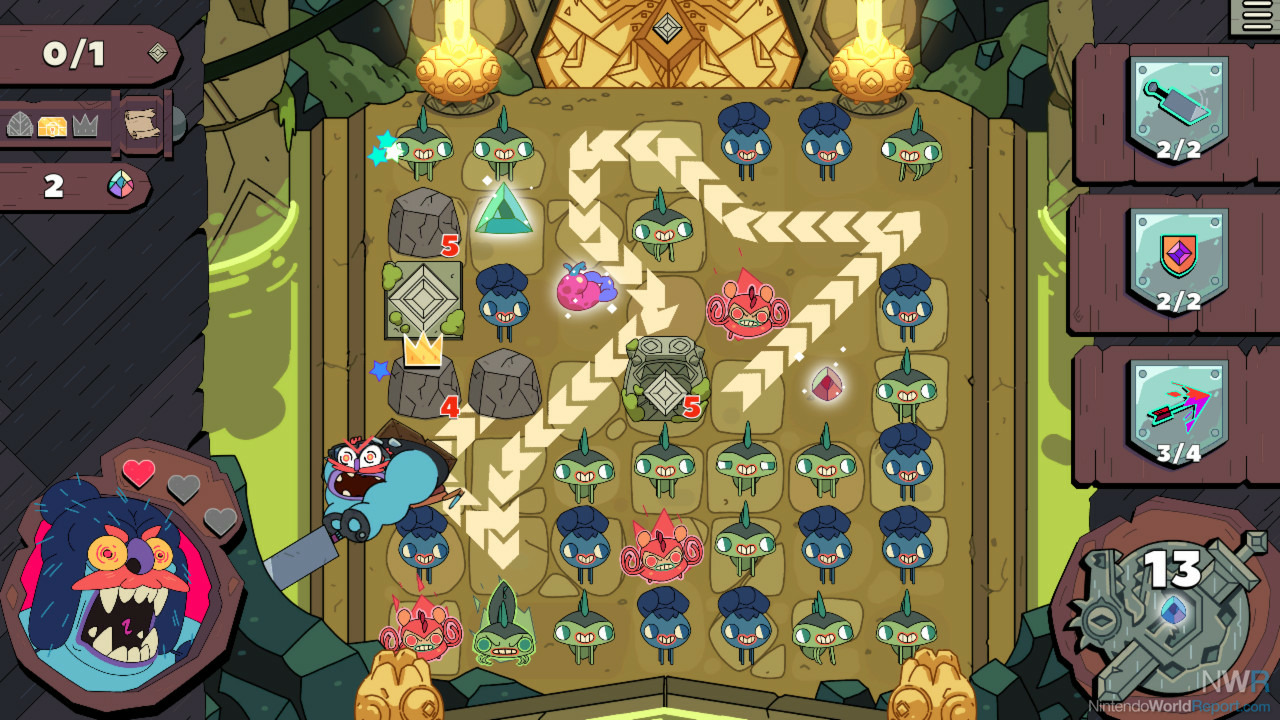 In action, it’s a delightful game of sequencing - each turn is best used not just to directly complete the level objective, but setting up your next move to be more effective. This could be either landing Jorj into an advantageous position to get a ten-plus combo, racking up enough kills to use that chain against big baddies, or making a slight move to avoid attacks from enemies. Rarely have I found myself in a position that wasn’t of my own making, with each victory a joy and defeats leading to me kicking myself for making a boneheaded move. At the end of each section there’s a boss which requires even more strategic move-making in order to defeat them and move onto the next zone. Want an additional challenge? After the objective is complete, you can delay heading to the exit and try to rack up more rewards, but the difficulty cranks up the longer you linger, adding a nice test of mettle at your choosing.

Like any good roguelike, there is a central hub where Jorj can buy different wares. A bartender will let you restore health for a price of five gems per heart. An equipment vendor sells equippable items that can boost movement or attack power. Go to the lower level, and a bestiary shows all the enemies you’ve encountered, with the promise of a reward if you fill it out completely. Besides the inn, there is a daily grind - a series of challenges that get more difficult as you progress, but can yield rewards that are helpful in Jorj’s journey. It’s a nice addition for both the challenge and those rewards. 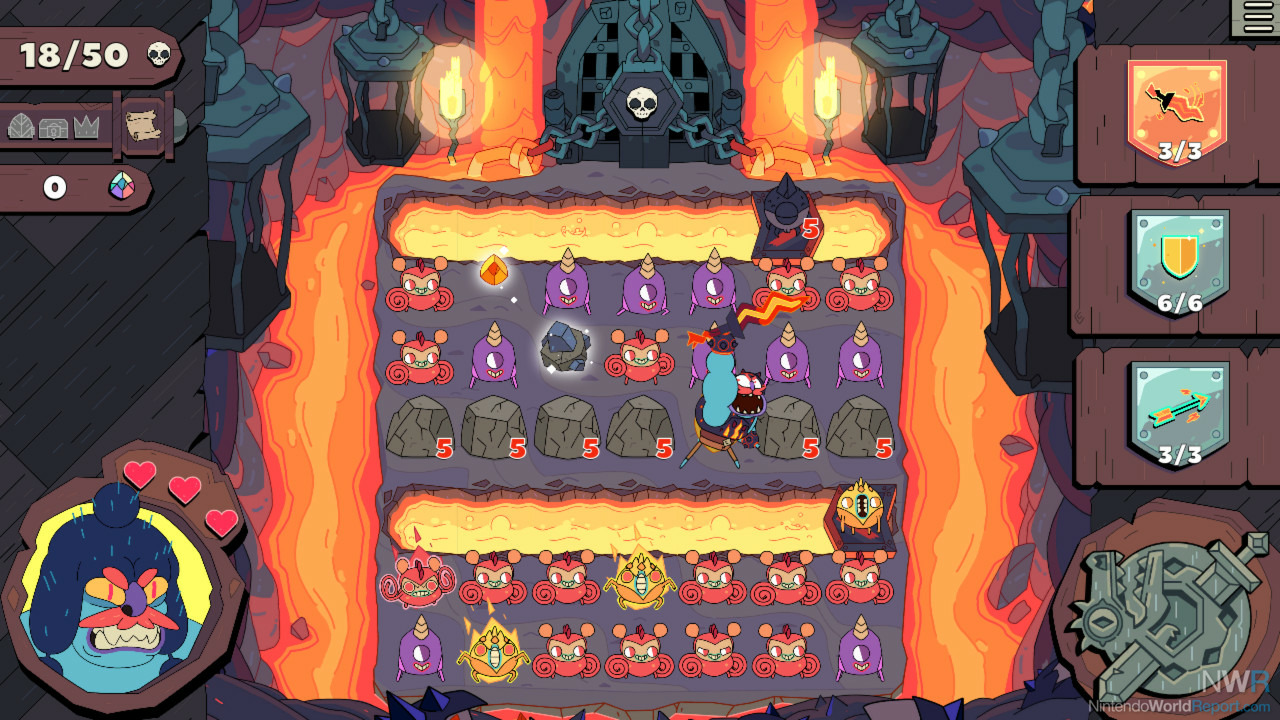 This is all wrapped in an expressive, cartoony world that feels reminiscent of something that’d come out of Cartoon Network. Jorj’s health is displayed in the corner with a profile of him that gets more beat up as he takes damage and expresses rage as he shanks enemies. Characters are both drawn with heavy lines and various shades of color that make them stand out from the background. Characters growl, yell, and groan in silly ways that made me laugh several times.

Grindstone is an example of a game which hits all the right notes and keeps up a quality in gameplay throughout that many struggle to maintain. The divine gameplay mechanics give a wonderful sense of control in spite of the randomness of how enemies fall, and the inputs of buying equipment or using currency to give temporary boosts gives ample opportunity for improvisation if things don’t go quite your way. I only wish there were more to play.