They're moving in herds. They DO move in herds.

I don’t think it will surprise too many of you to know that my favorite movie is Jurassic Park. I saw that tour de force at the tender age of 10 with my aunt and that experience has largely guided my life decisions forever after. It’s a shame that no sequels were ever produced! Of course, Jurassic Park is no stranger to the video game realm, and while most of them have disappointing, a few standouts do exist (anyone remember "Trespasser?"). This, dear readers, is perhaps the purest realization of the Jurassic Park concept: building a dinosaur theme park. As somebody who normally gets bored to tears playing city/park management sims, I found Jurassic World: Evolution charming and engaging, thanks in no small part to the subject attractions, which will drive kids out of their minds.

In Evolution, you will eventually manage several distinct parks on five islands in the Muertes Archipelago. Each park has its own challenges, and you won’t be able to access them all right away. You’ll start on Isla Matanceros, and once you prove you can manage a successful park, you’ll get to take on Isla Muerta, and so on. As you unlock new islands, you’ll also gain access to more dig sites, building types, and research projects. Because of this, the game moves fairly slowly, but in a manageable way—you’re never overwhelmed, and there’s really only so much you can do on each island until you move on. 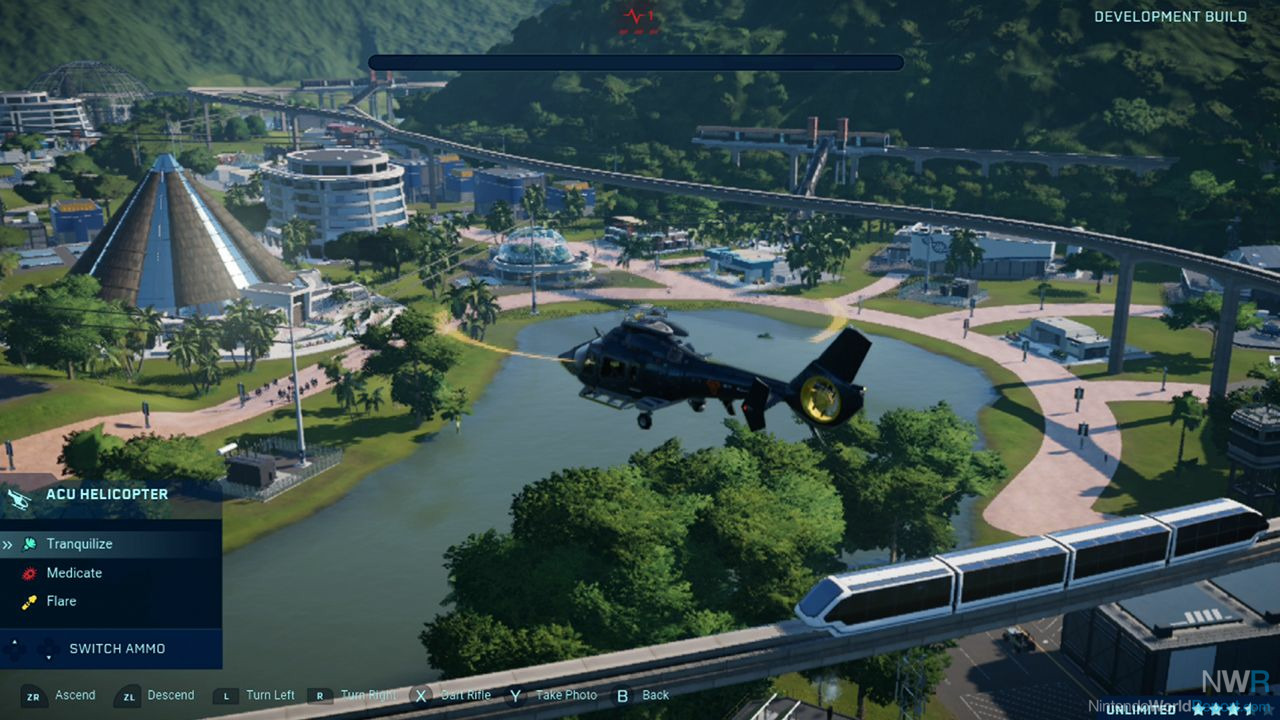 Effective park building involves balancing three essential assets: guest services, operations, and science. When you’re first spinning up a park, you’ll want to focus on cloning some interesting dinosaurs and building up some shops nearby to start pulling income. Once that’s done, you can build expedition and fossil centers, which will allow you to travel to real world dig sites to find more Dino DNA for more viable clones. Your research division can start looking at ways to improve your existing infrastructure or new facilities, or new genetic cocktails and medications for diseases. You’ll have to make sure you have enough power, which means setting up substations and pylons.

The dinosaurs themselves take some familiarity as well—each species has its own environmental preferences, as well as social needs. Struthiomimus, for existence, loves to live in as large a flock as possible, but while Dracorex also prefers conspecifics, it will become stressed out if it’s sharing a pen with too many other animals. Duckbill dinosaurs, like Maiasaura and Edmontosaurus, prefer wetlands while Triceratops likes grasslands. Ceratosaurus, a carnivore, likes grassland too, but requires a lot of territory to survey. In one of my parks, my Ceratosaurus pair occupies a pen that’s more than half the size of my “large herbivore” pen, which itself includes three Triceratops, five Edmontosaurus, and three Huayangosaurus, and they’re all perfectly happy.

Some dinosaurs simply don’t like living together—Velociraptor and Dilophosaurus, I learned, will attack each other immediately. Stressed dinosaurs have a tendency to break through their fences and go rampaging through your park, at which point you’ll have to tranquilize and transport them back to their pens…maybe after making improvements to it. One of your more important guest facilities is the Emergency Shelter, which you should activate whenever one of your assets gets loose. Some dinosaurs get stressed sooner than others, so it’s important to check in on your clones once and awhile—you never know if somebody is about to snap.

In addition to simply setting up your parks, you’ll have to contend with missions (“contracts”) supplied by InGen’s science, security, and guest services divisions. These missions range from extremely simple (collect a small herbivore fossil from a dig site) to long-term (get the Ankylosaurus genome up to 75%) to ridiculous (let a Huayangosaurus kill a Ceratosaurus). You can accept or decline missions as they come up, but getting in good with each division is the only way to unlock certain aspects of your park, be it new dinosaurs, new buildings and upgrades, or more research projects.

One way I was able to game the system a bit was by letting my most successful park do all the research whenever new research was available since they had money to burn. 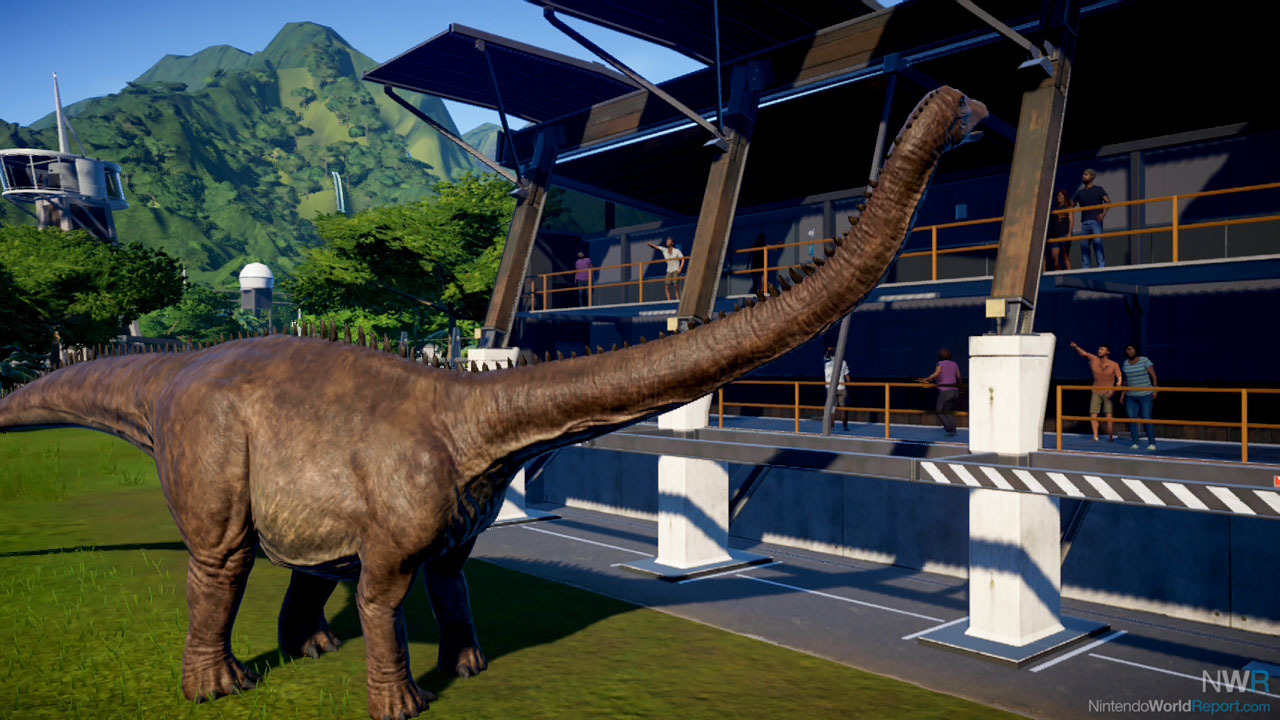 Each park has a variety of challenges. While Isla Matanceros, your starter island, has a lot of real estate to play with, Isla Muerta is a bit more boxed-in, with a steep slope descending from the monorail entrance and lot of jungle to clear. I’ve been tempted several times to simply bulldoze the entire infrastructure and build it back up in a way that makes sense. Isla Tacano asks you to basically do just that—it’s the site of a failed park that you’re tasked with restructuring after starting in debt. There’s always some crisis that needs fixing. Some of the DLC is separate from the “main” game, accessible from the main menu, including “Claire’s Sanctuary” and “Return to Jurassic Park,” which have unique dinosaurs and missions and do not overlap with the main story.

Evolution has a helpful “Manager View” where you can see various aspects of the park in terms of popularity or need. Where would your guests like to have a bathroom, or something to drink? Do you have a building that’s simply not getting any foot traffic? Need to increase the staffing at your facilities to serve more customers? It’s very helpful, although there were times I felt like the island’s layout tied my hands.

There are a couple things I genuinely do not like about this game—unless you meticulously plan your power needs, it’s very easy to start overlapping your substations by accident, and I can’t figure out for the life of me if one substation routed to two separate power stations share the load. On Isla Muerta especially, where real estate is at a premium, figuring out the maze of power lines was a huge headache, and the game simply doesn’t do a good job of telling you exactly what each power station is powering exclusive of the others. 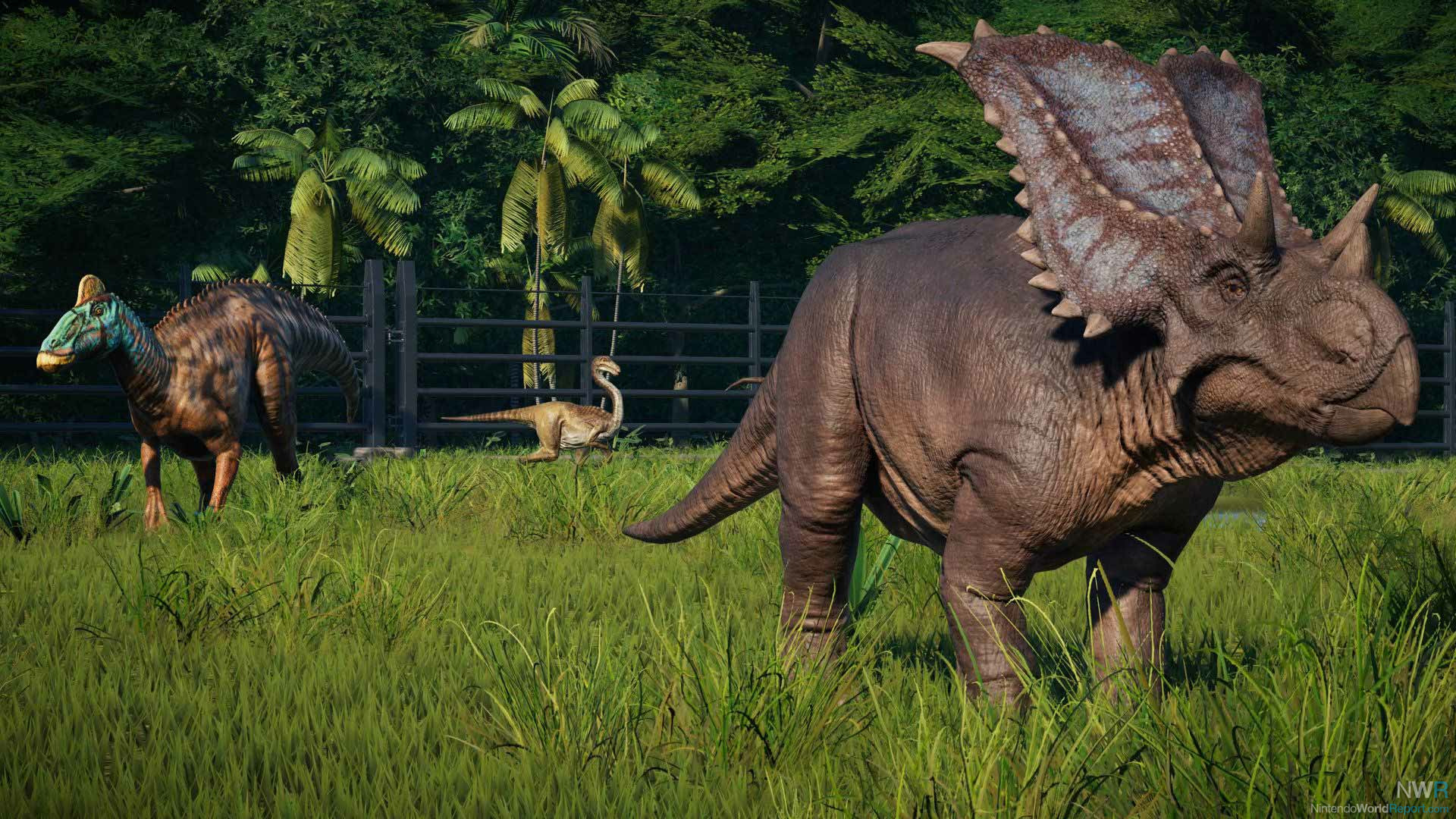 Similarly, I wish I could see a “grid view” of the island, which probably misses the point to some degree, but it would make infrastructure planning easier. The rate at which you unlock new things, and dinosaurs in particular, is a little on the slow side, especially when you consider that it takes multiple trips into the field and multiple fossils of varying quality to successfully clone a new dinosaur. On the cloning side, it’s unfortunate that adding various genetic cocktails often results in lower embryo viability, and that most cocktails require you to meet certain percentage benchmarks for a given dinosaur.

And how about those dinosaurs? You knew this was coming, so if you don’t care about dinosaur accuracy, maybe skip the next section (click those links for relevant papers)!

1. Almost all major dinosaur groups get fantastic representation, and include both popular (Tyrannosaurus) and obscure (Proceratosaurus) members.

2. Most of the herbivorous dinosaurs look great and are surprisingly accurate to what we think (in 2020) they really looked like. I was especially impressed by the shovel-beak and soft-tissue crest on Edmontosaurus, the massive crest on Tsintaosaurus, and the mere presence of Olorotitan.

3. I was also happy to see Torosaurus and Triceratops as separate animals, and the inclusion of relative newcomer Nasutoceratops, as well as classic ceratopsids Chasmosaurus and Pentaceratops.

4. There are lots of thyreophorans, including “Crichtonsaurus” (even if it should’ve been called Crichtonpelta), and Gigantspinosaurus, with its impossibly large shoulder spines. Ankylosaurus looks a little more generic than I’d like, but the surprisingly accurate Euoplocephalus makes up for it.

4. They even included two relatively new sauropods, the Cretaceous lawnmower Nigersaurus and the impossibly large titanosaur Dreadnoughtus, both of which are good choices given how completely-known they are.

5. The large theropods generally look good, and I was psyched to see Carnotaurus (my favorite dinosaur) and its one-horned cousin, Majungasaurus, included. You could argue that tyrannosaurs are under-represented, but the non-Tyrannosaurus tyrannosaurs, Albertosaurus and Proceratosaurus, both look great even if the latter should have downy feathers.

6. I was also generally happy with how well-scaled the dinosaurs were. Tyrannosaurus is significantly larger than Ceratosaurus, for instance, and Dreadnoughtus dwarfs everybody else except maybe Brachiosaurus.

1. For the most part, the small theropods look awkward without the feathers we know they should have. I understand this is a Jurassic Park trope, but "Troodon" just looks weird without them. Similarly, the theropods should have medially-facing palms, not bunny hands—theropods could hold a basketball, but couldn’t dribble.

2. Some of the dinosaurs suffered from looking too similar to each other, for example Baryonyx and Suchomimus, Carcharodontosaurus and Giganotosaurus, or Chungkingosaurus and Huayangosaurus. Of course, each pair is from the same family, so it’s sort of understandable.

3. I had to chuckle that, while Triceratops and Torosaurus are kept separate—instead of one being a growth stage of the other—the same was not applied to the bone-headed pachycephalosaurs. Here, we have Dracorex, Stygimoloch, and Pachycephalosaurus as distinct animals when in reality, they probably form a growth series of the latter.

4. You’re all going to groan, but the dinosaurs that appear in the Jurassic Park/World films are those who suffer the most—now that we know that Spinosaurus was a semi-aquatic, newt-tailed, corgi-legged monstrosity, it’s hard to see the Jurassic Park 3 version as anything but silly. Sinoceratops, a horned dinosaur who you may remember from Fallen Kingdom and Camp Cretaceous, has holes in the frill that are visible externally. This would not be true of the real animal. This game's version if the famous Deinonychus gives it bizarre soft-tissue crests (it looks like a bipedal basilisk lizard) in an effort to differentiate it from Velociraptor.

5. It’s also a real shame that the only animal you can fill your aviary with is the godawful Jurassic Park 3 version of Pteranodon (which was, in fact, one of most fascinating giant pterosaurs). Pterosaurs are treated poorly in the Jurassic Park/Wold films generally, but I would have appreciated more pterosaurs in this game. Some of them were really weird, like filter-feeding Pterodaustro and antler-crested Nyctosaurus!

Jurassic World Evolution looks great on my TV, and while it’s perfectly serviceable in handheld mode, there’s definitely a graphical hit—everything looks much fuzzier. Depending on what scenario you’re playing in, you’ll hear some famous legacy voices, most notably Jeff Goldblum introducing the game and chiming in every now and then to give a warning about whatever the project division heads are suggesting. I really enjoy Jurassic World Evolution, despite my historical distaste for city/park sims. I’m sure this is mostly due to the dinosaurs themselves, but it’s also not overly complicated.

Now THIS is the review we needed to close out 2020. Nothing beats having Halbred talk about Dinosaurs and the accuracy of film/game representations of these creatures.

Was planning to get it on PC since sim games tend to control better there, but may pick this up on Switch instead since it sounds like a competent port, once the price is right.

Heads up, this game is free on the PC Epic store if anyone wants to try it out there first.