Shiren the Wanderer: Tower of Fortune and the Dice of Fate (Switch) Review

The term roguelike when it comes to modern games generally means the level layouts change each run with randomized loot and perma-death, meaning the player has to start over from the beginning. These elements were present in the original Rogue: Exploring the Dungeons of Doom, but a lot of other mechanics featured there aren’t typically carried over. Shiren the Wanderer: The Tower of Fortune and the Dice of Fate from Spike Chunsoft does use those mechanics, however, in what is a surprisingly faithful adaptation of Rogue. 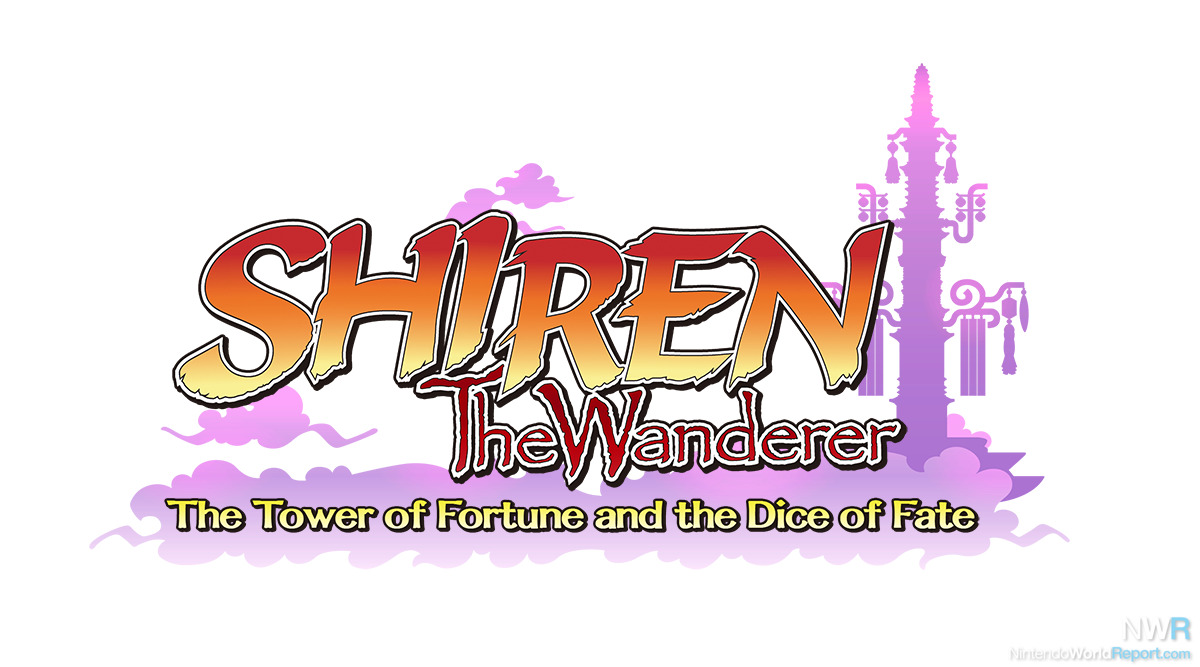 Shiren the Wanderer is a top-down, action roguelike with RPG elements. A couple of the often unused mechanics from Rogue appear here, such as how it’s turn-based: monsters can only act when you act, like moving one square or using an item. New items need to be identified. Equipment can have certain stats or effects bound to them that won’t be known until they’re equipped or identified by an NPC or another item. Some of these effects can be deleterious like items not being able to be unequipped or sealing some of the items effects like bonus damage.

The most notable way that Shiren the Wanderer diverges from more modern roguelikes is how character strength is handled. Other roguelikes make your character more powerful by finding perks that alter their abilities. For instance, you find a bow to use as a weapon and later you find a perk that causes the arrows to explode when they hit an enemy. This particular one makes the player avatar stronger by making them more versatile through finding tools. Obviously, doing more damage is still beneficial, but solving most sticky situations is accomplished by clever use of item effects.

The way this works in practice is that pots, staves, grasses and scrolls all have effects on either Shiren or the enemies of the dungeon. A Knockback Staff will push enemies away from you. Opening a Hilarious Pot will send surrounding enemies into laughing fits. Slumber Scrolls will put all enemies surrounding you to sleep. Opening the backpack is the most powerful option Shiren has in The Tower of Fortune. 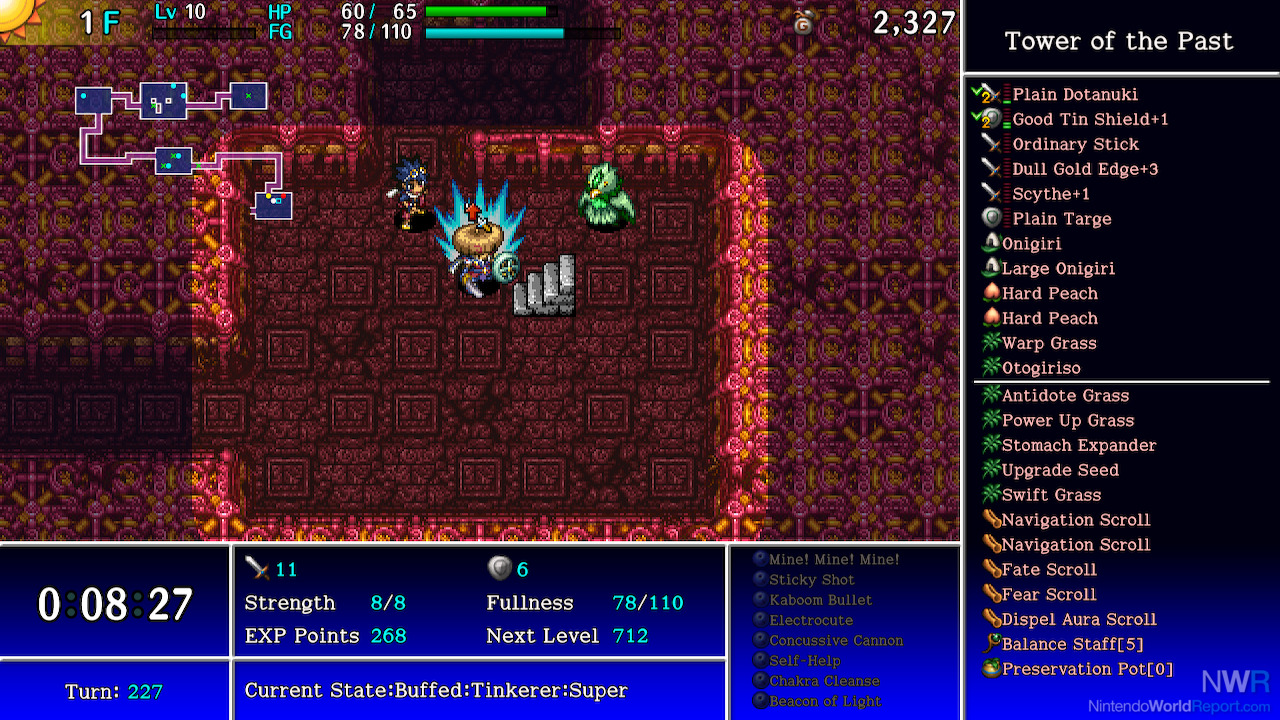 The truly impressive thing about the items in Shiren the Wanderer is how many there are and each unique way to deploy them. The Hide Pot is an item that can be used to trap an enemy and take them off the field or Shiren could put themselves into it to dodge enemies for a few turns. I was blinded by one enemy, which makes the entire screen black except for Shiren, so I just hopped into my Hide Pot to wait until the effect wore off. Onigiri can be eaten to increase Shiren’s fullness on his hunger meter or it can be thrown at squid enemies to defeat them in one hit.

All of this information is before taking into account the actual narrative of The Tower of Fortune. The plot finds Shiren coming across a small village where one of the inhabitants, Oyu, has a terminal illness. Another villager, Jikorichi, is determined to climb the Tower of Fortune where a rumor says that collecting the three Dice of Fate allows a person to reroll their destiny. Shiren agrees to help him with his quest. 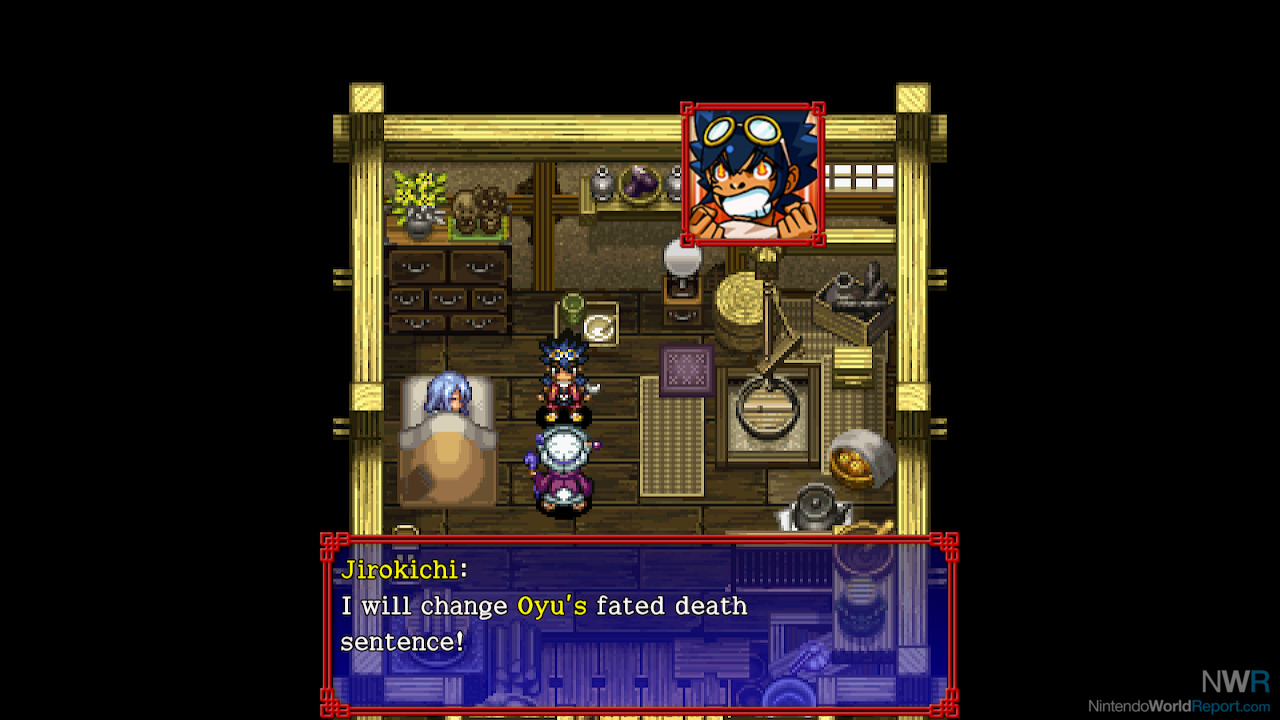 The game features a large number of supporting characters with side quests to complete. While helping Jikorichi and Oyu I met two fox-girls trying to solve a mystery. Some spoiled rich kid needs help exploring and not dying. A gambler still owes me 4,500 gitan. Some big cat with a gun is mad at me. All of these narratives evolve over the course of the adventure and could advance each run. No worries on repeating content because once progress is made on these quests failing a run won’t remove it. Even more stories and content—there are three version exclusive dungeons—opens up after finishing Jikorichi and Oyu’s quest. It’s impressive how much content and narrative is packed into a game that was originally released in 2010 for the Vita.

The emergent narratives that happen based on how these systems and side stories intertwine is my favorite part of this game. One run I found a small child walking around one of the dungeons. I wanted to make sure this kid was safe so I go talk to them. They mentioned they were separated from their sister and asked me to go find her. I went to the next floor and accidentally stepped on a spring plate, a trap which flings you to a random spot on the dungeon floor. I was separated from my allies, and the room I was flung to was a monster house; I was alone and surrounded by monsters on all sides. I had time to make one move before I was attacked by four different monsters at once which would have killed me. Also in this room was a cowering girl. This was the small child’s sister from before. I needed to defeat all the monsters in here to rescue her and complete their quest. I opened my backpack and found the Immunity Scroll I purchased at a shop earlier in the dungeon. Reading the scroll allowed me to defeat every monster in that room and save this person’s sister. She thanked me for aiding her and promised to repay me one day. Seeing this small story play out was heartwarming, and, at the same time, going from almost assured destruction to solving the puzzle in one move was satisfying. Not every solution will be as simple as turning yourself into an untouchable murder machine. Sometimes the answer is wolfing down Swift Grass and hoping the staircase is in the next room. 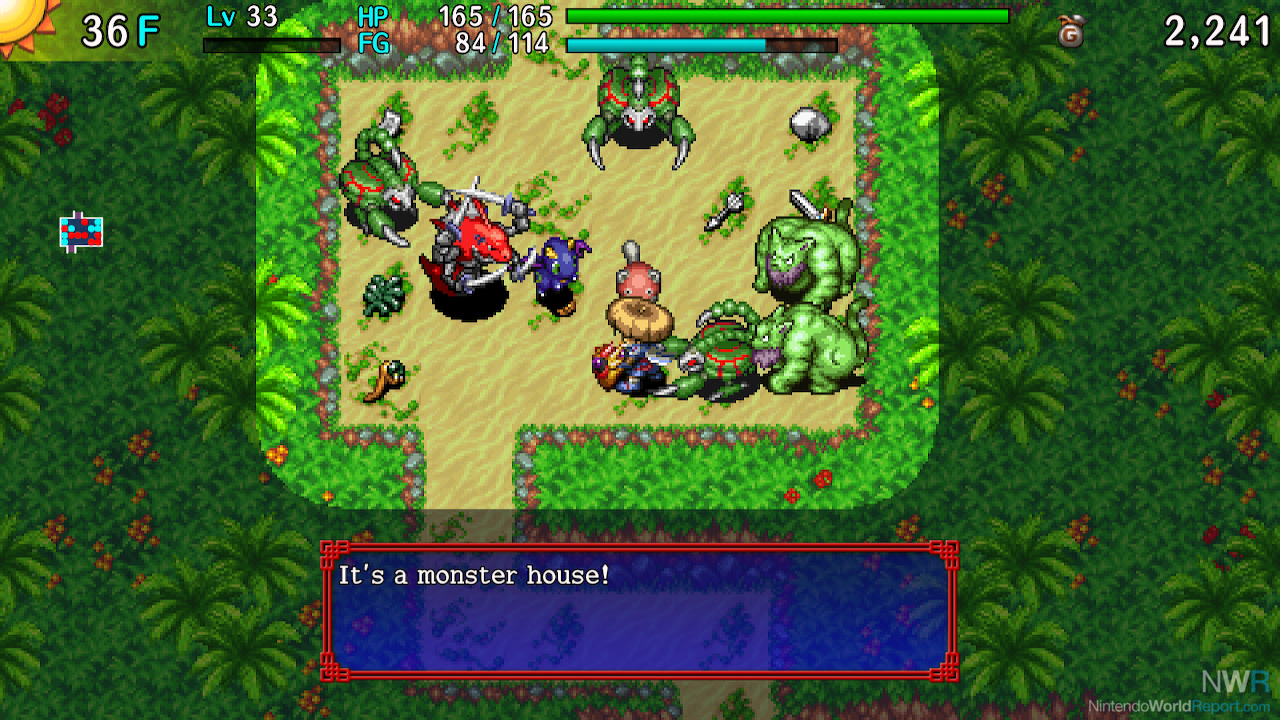 The Tower of Fortune has a lot to keep track of. All of this knowledge can get overwhelming, but Spike Chunsoft put a lot of effort into making sure that each mechanic can be researched in game. Somewhere in the main hub, an NPC will be more than happy to explain how a mechanic works. The bank teller will explain how and why anyone would store money there. If those NPCs are too hard to find, the manual that would have come with the physical edition of the original release is included digitally from the start menu. It includes a story overview and quick notes on how some of the grander systems work, like how to suspend your game, the different kinds of shops, and how the wanderer rescue system works. Wanderer rescue is a system where after dying in a dungeon an outside player can send you a revival herb to save your run. I didn’t get to spend too much time with this since the system wasn’t populated very much due to being in a pre-release period.

The first town houses the Beginner House that explains how nearly every item works by placing you in a mini dungeon designed around escaping with that item. I recommend going through every one of these. Success will come from knowing how items can fix a bad situation. Items have descriptions detailing how they can be used, but the tutorials go into more granular detail. How I knew to use the Hide Pot to negate being blinded was from doing the tutorial for that item. If you’ve ever been curious about playing a roguelike of this kind before, this might be the best jumping in point due to how much care Spike Chunsoft put into onboarding new players.

Speaking about the game artistically it’s very easy to gush with praise. The pixel art world is only ever a joy to look at. Each dungeon has its own distinct look and feel while also being breathtaking. Several times I had to stop and admire the beautiful scenery. It helps that each dungeon isn’t exclusively the inside of ornate buildings. There are a number of outdoor levels as well. The music is equally great, and I’m not even really a video game music person. Most of the time I don’t notice it, but here I found myself constantly bopping around to the background music. 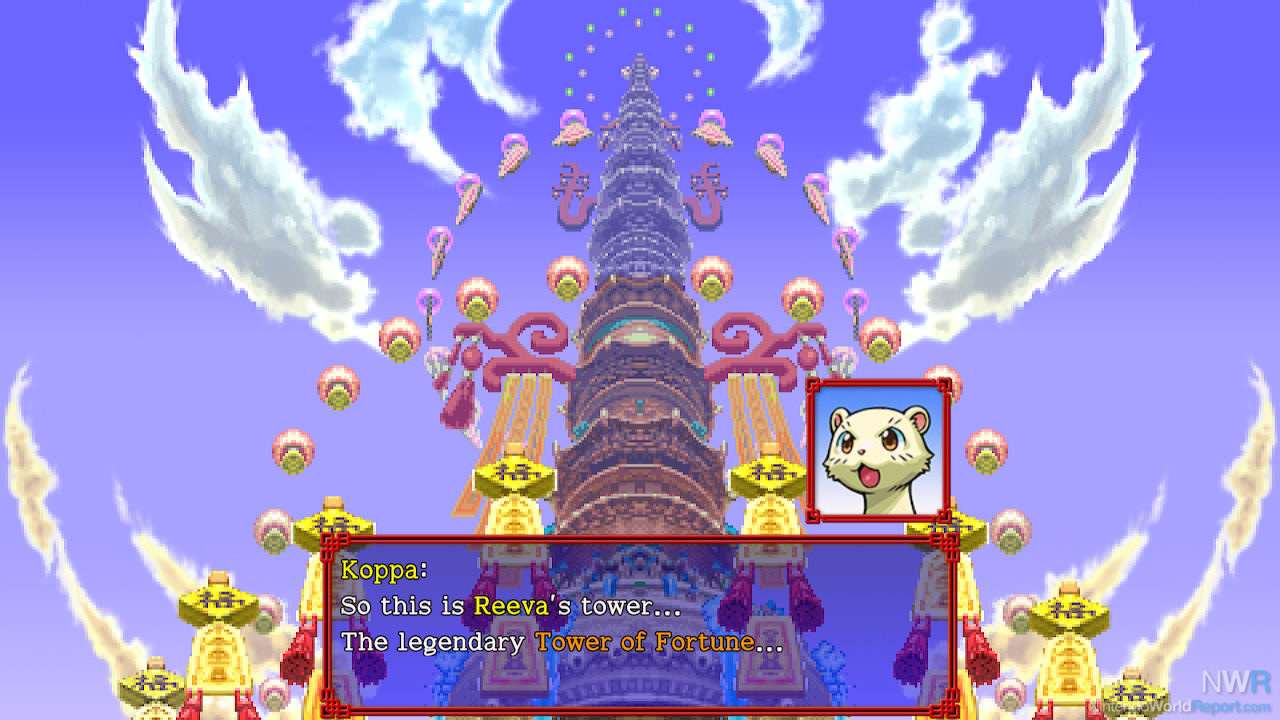 Stretching for negatives to mention, I found that there is a lot of time spent in menus. With the importance of items, the acts of organizing and swapping around your inventory are essential yet tedious. Finding a more useful item on the ground means having to open several different menus. Making space for things by putting items into storage pots requires navigating a handful of menus. Another knock is that run length is pretty long. A full run has you going through three different dungeons with easily over 30 floors that takes a few hours. The suspend feature is very nice for picking up a run later, but there is some time devotion required to finish a run. Movement will also take some getting used to. Moving diagonally is decently important in the game. They gave you a dedicated “move diagonally” button to do it consistently; it isn’t exactly an elegant solution, though.

I know Shiren the Wanderer: The Tower of Fortune and the Dice of Fate is a good game because I’m devoting small amounts of time to it. When I have 20 minutes to spare I’m calculating whether or not loading it up would be worth it. Success in game gives me the feeling that I did something clever. The side stories are interesting and I want to know how they turn out, and it’s a beautiful world to spend time in. I have a real feeling of regret knowing there is a lot of content here that I will never see. There are numerous aspects of Shiren the Wanderer that I couldn’t find a way to jam into this review like how allies function, the over 100 optional sokoban puzzles, the Minesweeper-like dungeon, creating new items at the Tanuki lottery house, fusing items together for new effects, and much more. For anyone wanting to dive into a game with real depth, this is a great one.