A Zelda spinoff that successfully deepens the lore and focuses on action.

When Hyrule Warriors launched on Wii U, Nintendo and Zelda weren’t in the best of places. Back in 2014, the company was in the midst of one of their worst financial stretches ever while The Legend of Zelda series existed primarily in a state of remakes and delays following Skyward Sword’s mixed reception. Hyrule Warriors didn’t save the Wii U or Zelda, but it was an enjoyable combat-heavy romp that relied heavily on nostalgia as it blended the style of Koei Tecmo’s Musou games with Zelda series staples. In 2020, Hyrule Warriors: Age of Calamity is launching in a much different world. The Switch has been the best-selling console in America for almost two full years and after The Legend of Zelda: Breath of the Wild, the Zelda franchise is arguably at its cultural peak. Age of Calamity is a marked improvement over the original Hyrule Warriors, baking in refinements and a more streamlined design to craft an excellent Zelda Musou game that does a great job of serving as a borderline-necessary companion piece to Breath of the Wild.

The reason for that tie to Breath of the Wild is because Age of Calamity is a prequel of sorts. It kicks off 100 years before the start of the 2017 Switch classic, dropping you in as Link fighting on a pre-calamity Hyrule Field. It’s revealed very early on that some timey-wimey chicanery is at play to make this story not a direct prequel, though. While some of us might have wanted it, this is not the Rogue One to Breath of the Wild’s A New Hope. That might be for the best, though, because the alternate timeline makes for a much greater variety of action. Going too deep into parts of the story would spoil some aspects, but it’s truly enjoyable to spend much more time with memorable characters from Breath of the Wild while getting some fun bits of series lore peppered throughout. 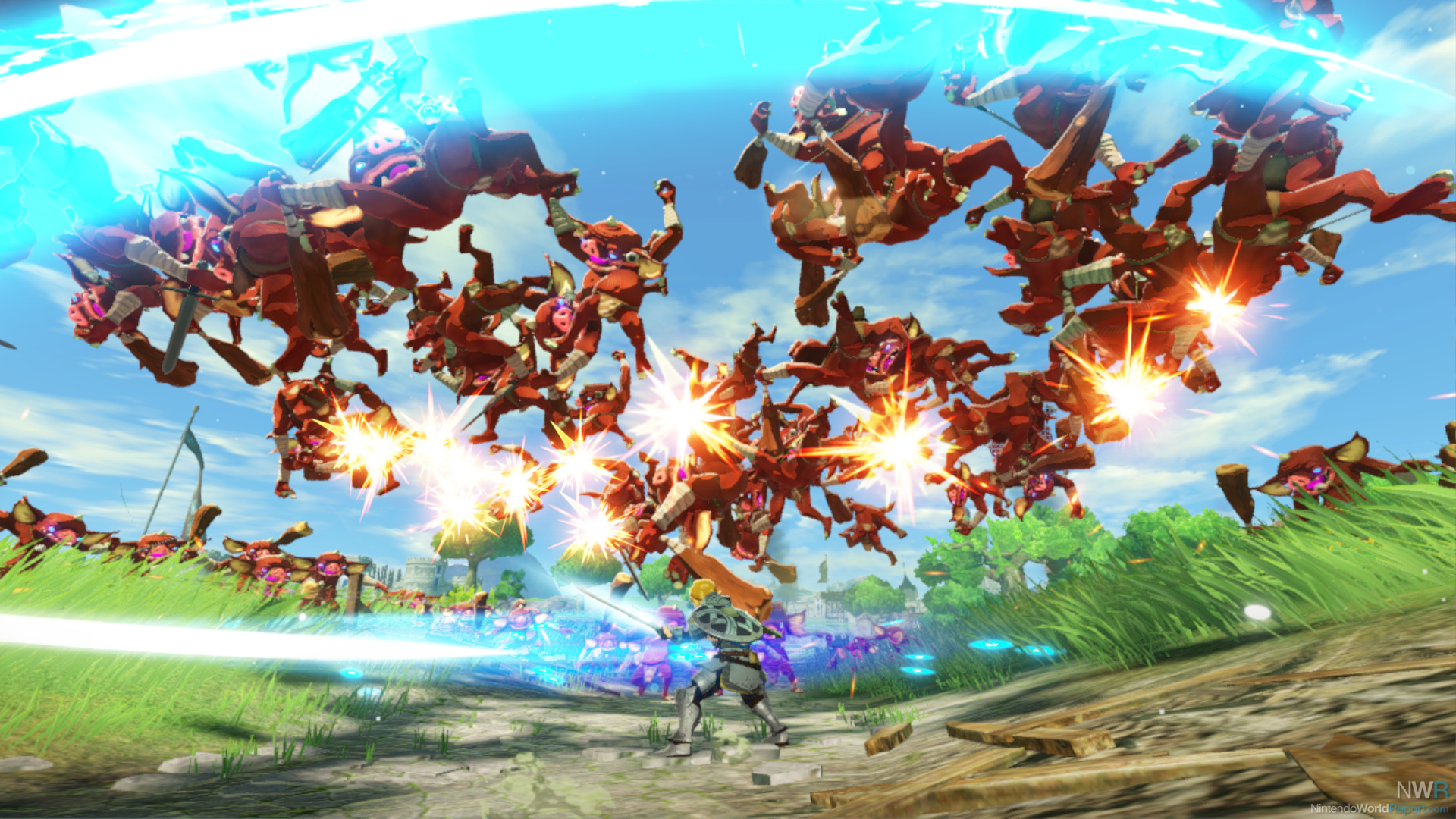 While the amount of voiced cutscenes is almost dizzying, the true focus is on the gameplay, which involves a heavy dose of smashing the crap out of bokoblins, lizalfos, and moblins. Most of your action involves stringing together combos of light and strong attacks, but the way the Breath of the Wild elements are integrated into the combat makes it more fresh. Each of the four runes comes into play, so you can, for example, swing around metal crates with Magnesis and stop foes in their tracks with Stasis. The runes are also used regularly to counter-attack bigger enemies. Every character also has a special attack that gives them a unique feel, with examples including Link firing off a volley of arrows, Revali flying around the map to use different attacks, and Urbosa shooting lightning mid-combo. I definitely have favorites—Urbosa is incredible—but the fact that every character is so distinct makes them all fun to play at a minimum. When compared to the original Hyrule Warriors, some of the character abilities are a little less ridiculous—you don’t have a regular combo where you chuck the moon from Majora’s Mask at foes, for example—but some of the moves you can pull off retain that goofiness. Age of Calamity takes itself more seriously than the lunacy of the prior game. 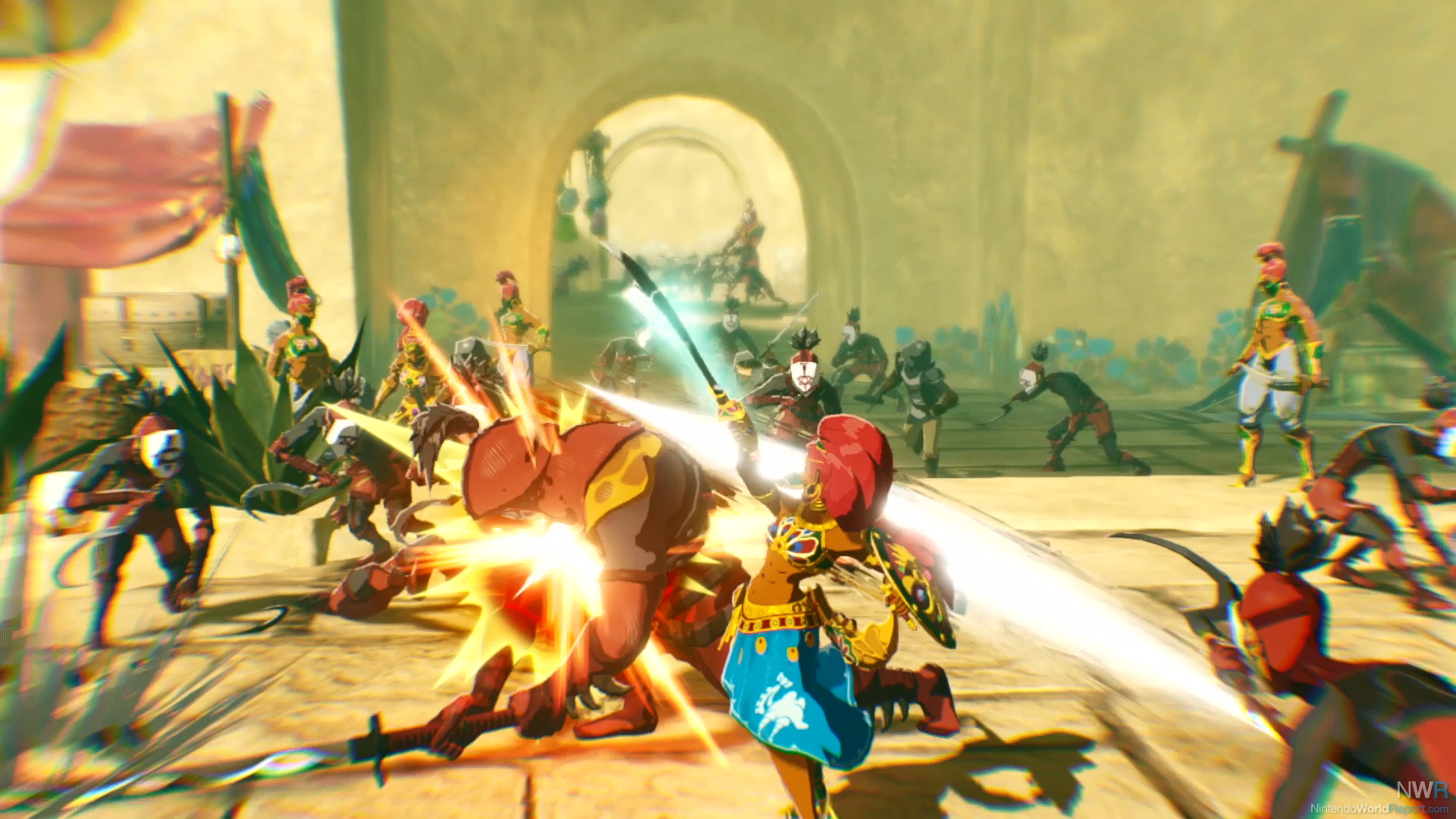 The missions you take all these characters on are varied enough to not get stale, even if they are reductively almost exactly what’d you would expect from this type of game. You’ll fight a ton of generic enemies in huge waves while trying to get to objectives on the map so you can fight a boss, save a hero, or capture an outpost patrolled by foes. It’s at its best when you have three or four characters to control on the map because you can seamlessly switch between them. Additionally, much like the later versions of the original Hyrule Warriors, you can give characters orders to go to a certain point, so you can beat up a Wizzrobe with Link while Daruk makes his way to save a Zora Captain. While this is part and parcel for the style, the story missions get incredibly long in the back half. The moment-to-moment gameplay is fun, but maybe don’t make those moments an hour long at a time. Additionally, a few recurring moments didn’t land with me at all. Periodically, you control one of the four Divine Beasts in rail shooter-styled levels where you use a few special attacks to level hundreds of enemies with the giant mech’s immense firepower. These are mostly clumsy missions with a novelty that wears thin fast. Revali’s Vah Medoh is by far the best because at least those bird levels have an interesting air-based component.

Missions are laid out over the world map from Breath of the Wild, which is a nice touch made better by the fact that some of the maps you explore are very clearly modeled after the post-calamity ruins you explored in the earlier adventure. This sometimes leads to some tight spaces where the camera doesn’t give you a great view of the action. Also on the world map are a wealth of other optional missions and content. Various challenge missions give you more bite-sized combat scenarios to fight through while upgrades for individual characters and unlockable shops help you strengthen your team. All of the upgrades require resources, which are found by killing enemies, exploring levels, and buying them at shops. It captures some of Breath of the Wild’s resource-collection focus, though the more random loot drops here are less enjoyable. You also collect a lot of weapons and while they’re not breakable (thankfully), sorting through all the duplicates you get and trying to figure out the best upgrade path for your different heroes is cumbersome. In spite of those minor quibbles, I adore the challenge missions, mostly because of some of the clever time-limited designs that make you focus on different elements of combat compared to in the narrative missions. It’s very possible to just steamroll through the story, but I found that I had more fun with the game when I stopped to smell the roses and do the side missions. 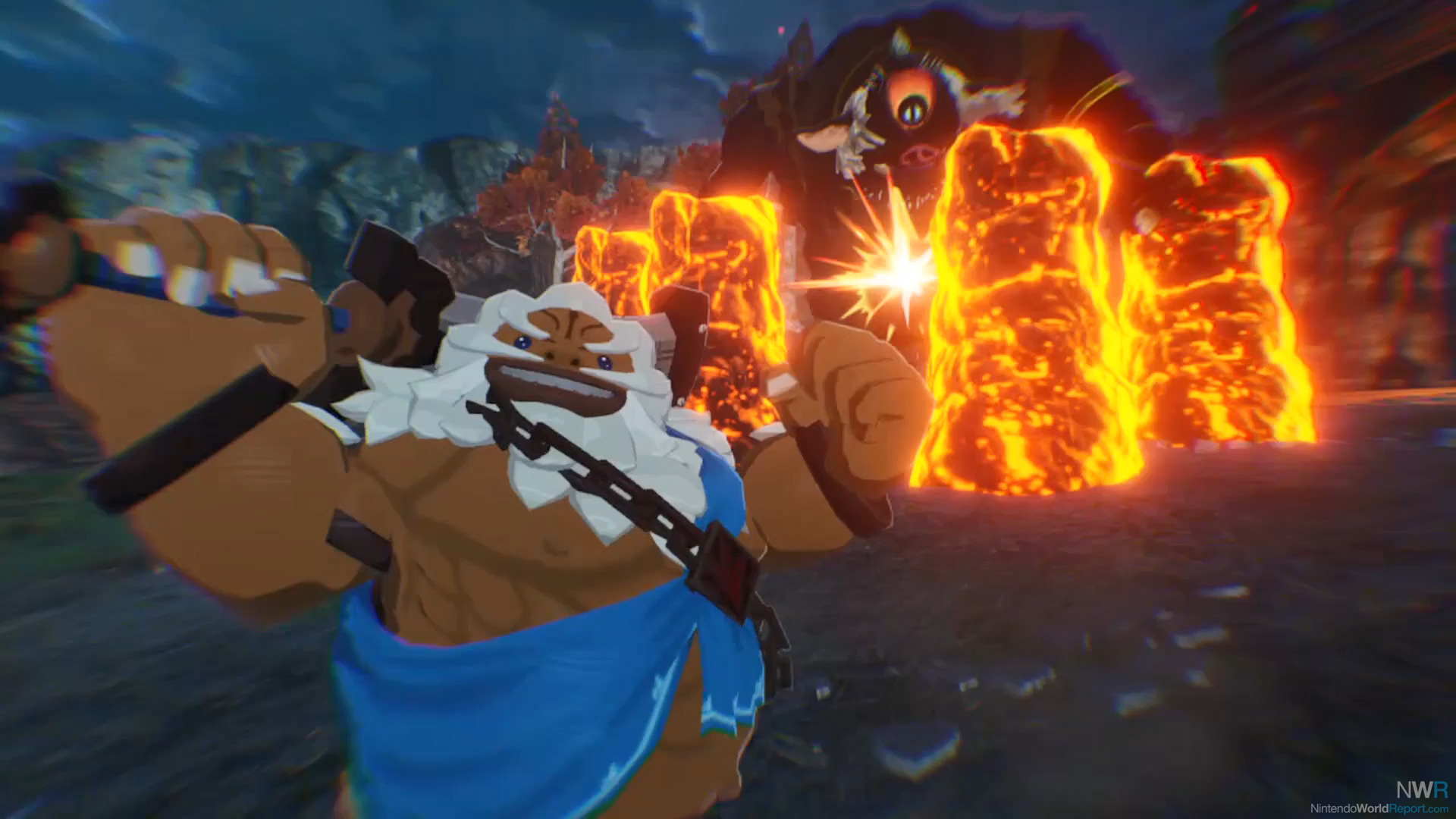 Part of the fun in Age of Calamity is how much it directly ties to Breath of the Wild. The sound design is pitch perfect and the soundtrack is fuller, building well off of memorable melodies. It’s not visually identical to its inspiration, but it captures that specific art style very well. Unfortunately, the frame rate isn’t consistent. When the action gets frantic, slowdown is frequent. The only saving grace is that this seems to be at its worst during special attacks, where you’re not controlling characters. The slowdown is workable, but it’s unseemly at best and gameplay-affecting at worst. I reached a point where I just knew when to brace for slowdown and tried to roll with the punches, but it’s not ideal.

Humorously, aside from the technical issues, a lot of my problems with Age of Calamity echo the ones I had with Breath of the Wild. The Divine Beasts are solidly the weakest part of the campaign and the inventory is a little clumsy to manage. That all being said, the totality of this Musou game is soundly enjoyable. The confidence on display in Hyrule Warriors: Age of Calamity echoes the earned success Nintendo has found after Breath of the Wild and the Switch. This is a refined and tight action-packed experience that delivers an excellent mix of Zelda lore and creatively ridiculous brawler gameplay.

Shame about the performance issues.

The game reads to be a cool follow-up to the first Hyrule Warriors and Breath of the Wild. I'm excited to get it, sooner or later.

chuck the moon from Majora’s Mask at foes,  ... more seriously than the lunacy of the prior game.

we see what you did there  :D