Ratalaika Games publishes a lot on the Nintendo Switch eShop. Searching their name on the Nintendo website brings up 97 games they’ve released for Switch. Most of these are just okay. There are some bigger names among budget indie games like Daggerhood or One Night Stand, but their offering from ABX Game Studios Two Parsecs From Earth is more along the lines of just okay.

Two Parsecs From Earth is a 2D Platformer Metroidvania. Your character, Z3-L1, loses their ship’s cargo after crashing on an unknown planet. You’ll pilot them through various jumping puzzles trying to collect that lost cargo and a few batteries to power their ship. Along the way there will be new abilities to learn, which will allow them to reach new areas and new pieces of cargo. Finding an upgrade comes with a choice though. Picking one ability will lock you out from the other one. The game can be finished with either ability, but how you move and interact with the environment will change depending on which one you choose. 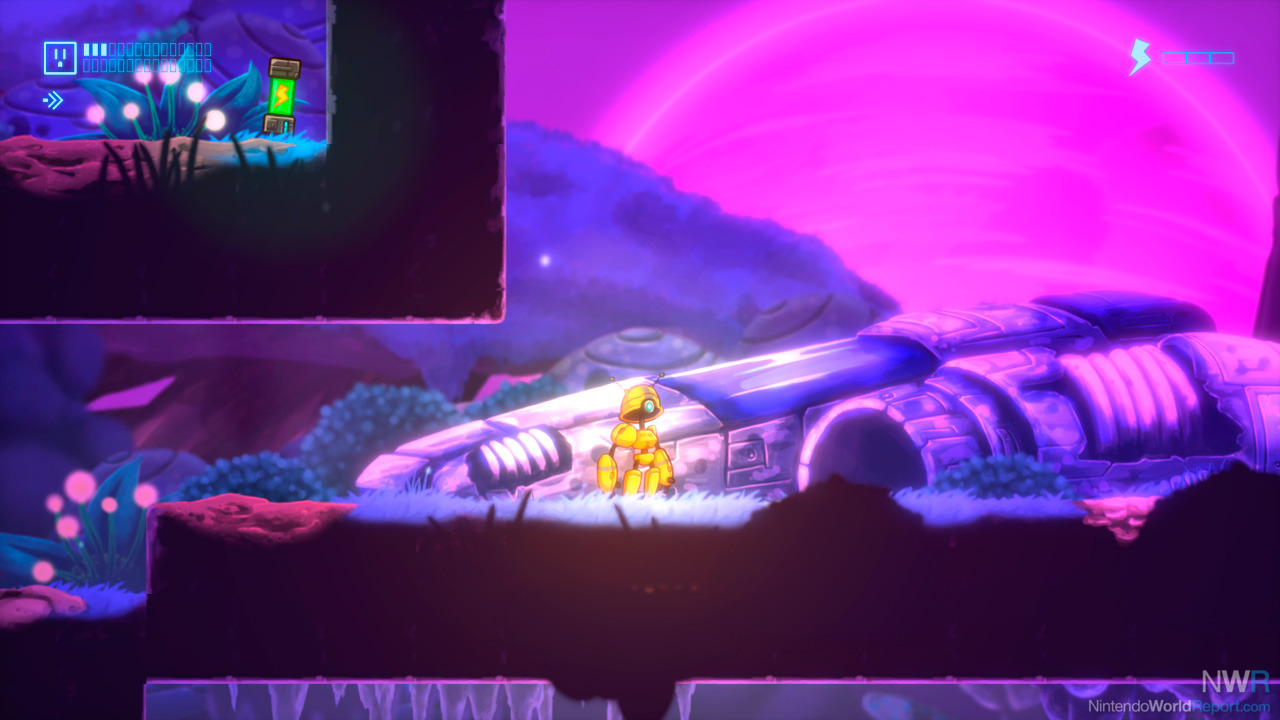 While the game overall isn’t anything special, there are still successful elements. Its visuals and artstyle are top notch. They might be a little on the simple side, but this means everything is clear and readable. A spike pit will look like a spike pit while also being aesthetically pleasing. The visuals are so nice that, in what will become a negative later on, the main character comments on how good they look.

I’m also a big fan of this map. There are two things that I highly value in a metroidvania: non-linearity and recontextualizing areas that you’ve already been. This map does both of those things. It’s possible to reach areas before you’re supposed to reach them. Cargo doesn’t have to be collected in a specific order. I’m pretty sure some lost pieces of cargo can be collected without unlocking the required ability if you try hard enough.

Changing how the player moves through revisited areas is core to a metroidvania’s experience and Two Parsecs From Earth does a great job with it. Heading back towards the ship with all the upgrades was a near continuous realization of all the pieces of cargo I could pick up now. Moving through old areas had a background chorus of “Oh! I can do this now.” The feeling of being capable of achieving what was impossible before is the strongest part of the game, and the only reason I played around in New Game+.

The bad aspects of Two Parsecs From Earth come in pretty quickly after the beginning of the game. First, the script isn’t very good, and I’m not talking about the concept. Crashing on an unknown planet is fine; I don’t need a big reason to go on an adventure. The main character is incredibly talkative, with Z3-L1 commenting on almost everything in an attempted quippy manner that doesn’t land. They once stopped in the middle of gameplay to cite how they hadn’t commented on anything in a while. Z3-L1 is Bubsy-esque in their verbosity.

The most egregious negative is that the movement controls don’t always work in a manner that one expects them to. For a precision platformer that is a big error. The player character dies immediately to any damage taken, so the likelihood you’ll be repeating sections is high. Needing to repeat sections because the player character did a jump differently than before is frustrating. 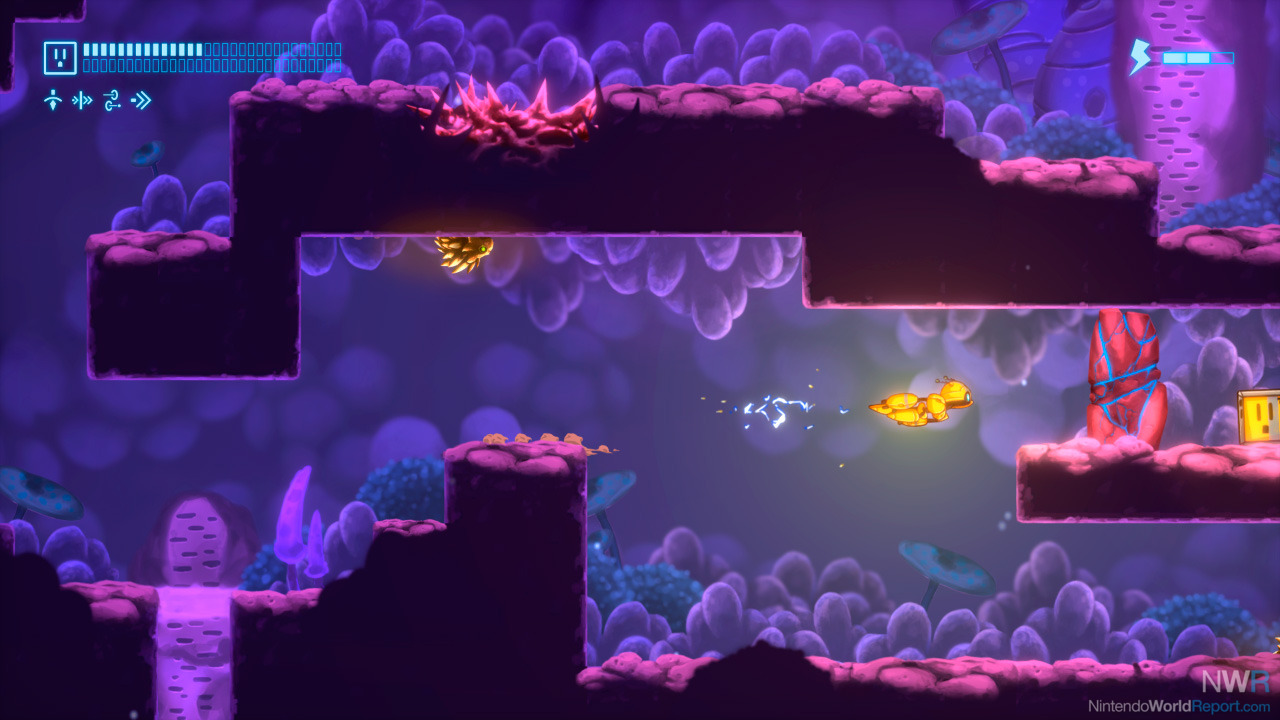 This occurs in several different ways. When jumping up a ledge, there will be times when they mantle over the ledge, but other times they jump over it. A number of obstacles require the use of short hopping, quickly pressing then releasing the jump button to achieve a smaller elevation, versus full hopping. This wasn’t always consistent. It would have been better if the two moves were assigned to different buttons. As well, Two Parsecs From Earth doesn’t include the mechanic known as “coyote time,” the ability for a character to still jump shortly after leaving the ledge. That’s more of a stylistic choice, but in the time where that mechanic would register nothing is allowed. Instead of using your double jump, they slide off the ledge and likely die.

With such a frail and difficult to control character, there's too much repeated content here. The only checkpoints are from screen transitions, so making any amount of progress is short lived. This led to me developing a strategy of collecting one cargo then backtracking to the screen transition to preserve any of the progress I had made. Some instances had incredibly long challenge runs that I abandoned due to not wanting to perform the same actions as many times as were required. Having a new checkpoint on each cargo collected in addition to one at screen transition would have helped immensely.

The sections that congeal all of the problems in Two Parsecs From Earth are the non-optional challenge rooms after picking up a battery. Z3-L1 is teleported to a place outside the map without explanation; it’s weird. As they are wont to do, Z3-L1 remarks on this being peculiar, which doesn’t actually make it better. The goal of these rooms is to escape a large flying enemy by traversing very precise jumping challenges. There is no room for error in these and the controls get in the way of success in all the ways described above. Landing in front of a ledge instead of on top of a ledge once means you’ll have to start over. The camera will also break in a way that makes it impossible to react to upcoming obstacles if you land in a specific spot from a jump. The field of view shifts too far right in a section where you’re running left, and the length of these sections is also too long for how not fun and difficult they are to complete. To top everything off, after completion Z3-L1 will comment on how unoriginal chase sections in a video game are. All three of these should have been cut from the final product. 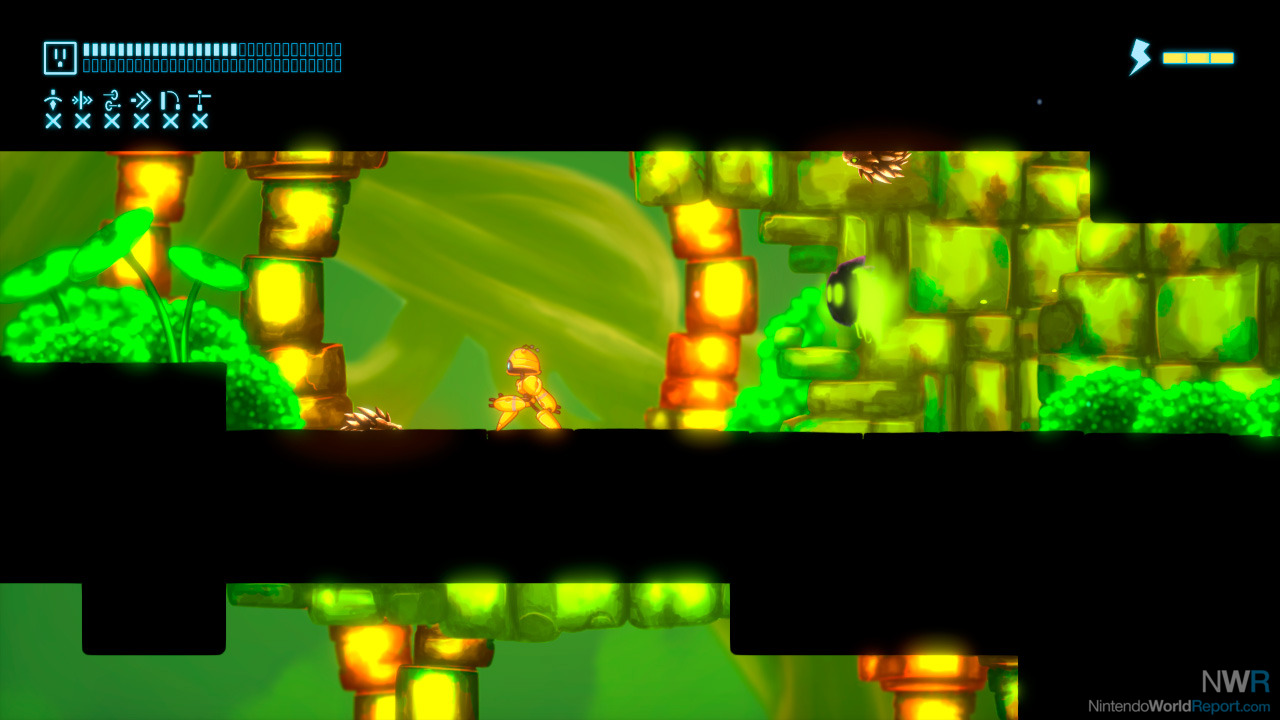 The game is clearly designed around speedrunning. The developers want the interaction with Two Parsecs From Earth to be the player learning routes and completing them faster and faster. Times for Any% and 100% are tracked under the statistics tab. I can’t see this being something anyone would want to speedrun, however, simply due to it being so inconsistent. Pressing jump at the same time and in the same way will give you two different arcs of jump, and I can’t tell you why. The big goal for the developer isn’t successful. It’s unfortunate since there are some good things here, but unpolished movement controls among other negatives are holding it back.